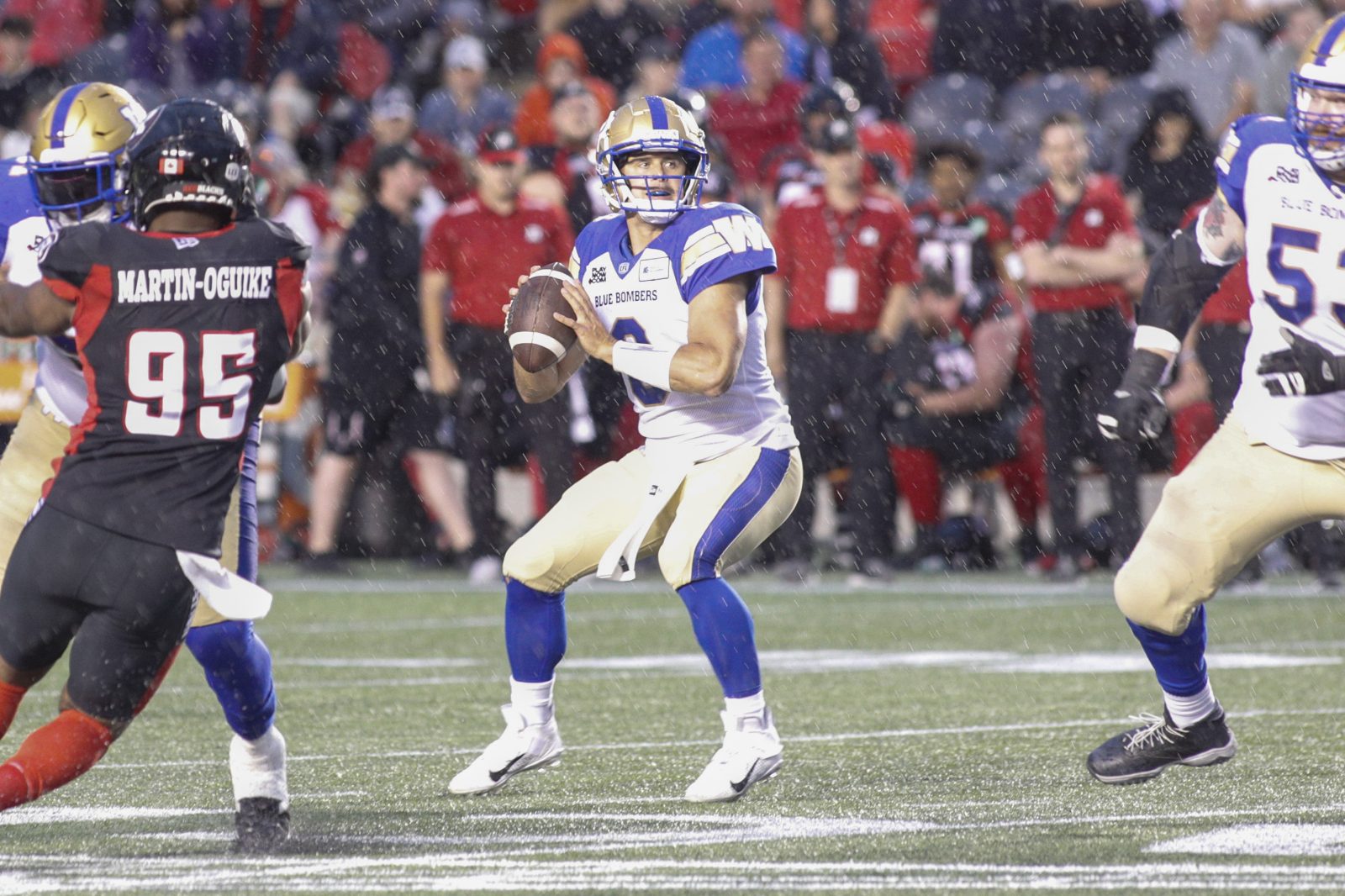 Winnipeg Blue Bombers quarterback Zach Collaros (#8) gets set to pass during first half CFL action against the Ottawa Redblacks at TD Place Stadium in Ottawa on Friday June 17, 2022. THE CANADIAN PRESS/Lars Hagberg

Let’s open with a couple of deep thoughts that are indirectly related to the Winnipeg Blue Bombers and their 2-0 start and how it has seemingly left so many wanting: Ever wonder how many works of art Vincent Van Gogh or Rembrandt painted that left them staring at the canvas and thinking, ‘meh’? Or how many times Bruce Springsteen had scribbled down some lyrics and then shrugged his shoulders while muttering, ‘there’s something here, but needs some work?’

We bring this up today in the aftermath the Blue Bombers’ 19-12 victory over the Ottawa RedBlacks at TD Place in the nation’s capital Friday night and how the club’s handiwork has already been measured against expectations, both from within the locker room walls and outside of them.

The point here is this: not every week is going to be a masterpiece, or a song that becomes iconic. And no, not every Blue Bombers win is going to be a candidate for ESPN Classic Games. Yet, when a team has captured back-to-back Grey Cup championships and is on a run that has seen it win 19 of its last 22 games, including playoffs, it means two things: First, the standard set by the team itself – and that weekly pursuit of perfection – begins to stretch into the stratosphere. And second, there is absolutely no way in Hades those expectations can be met week after week after week.

All of this isn’t to say the Blue Bombers get a free pass just because they are 2-0 today. Their sweep of the RedBlacks resulted in just as many questions still being posed as being answered.

Still, to those on social media who were already writing off this club during the game and suggesting the idea of a three-peat had suddenly somehow become a far-fetched fantasy, there’s this: it’s June and we’re two weeks into a season in which the RedBlacks will be a tough out.

Remember, too, that as dominant as the Blue Bombers were a year ago, they opened with a 19-6 win over Hamilton and then a 20-7 victory over Toronto before falling 30-23 to the Argonauts a week later.

They weren’t at their best to open the season, but by the end of the year had morphed into a dominant juggernaut. Ditto in 2019.

The Blue Bombers were candid and honest about their performance after the game and that comes from having so many veteran voices in the room, including quarterback Zach Collaros.

“I’m not taking away from what we need to do and watch this film critically and learn from it.”

More on the Blue Bombers second-straight win, on expectations, concerns and other stuff in this week’s edition of UPON FURTHER REVIEW… 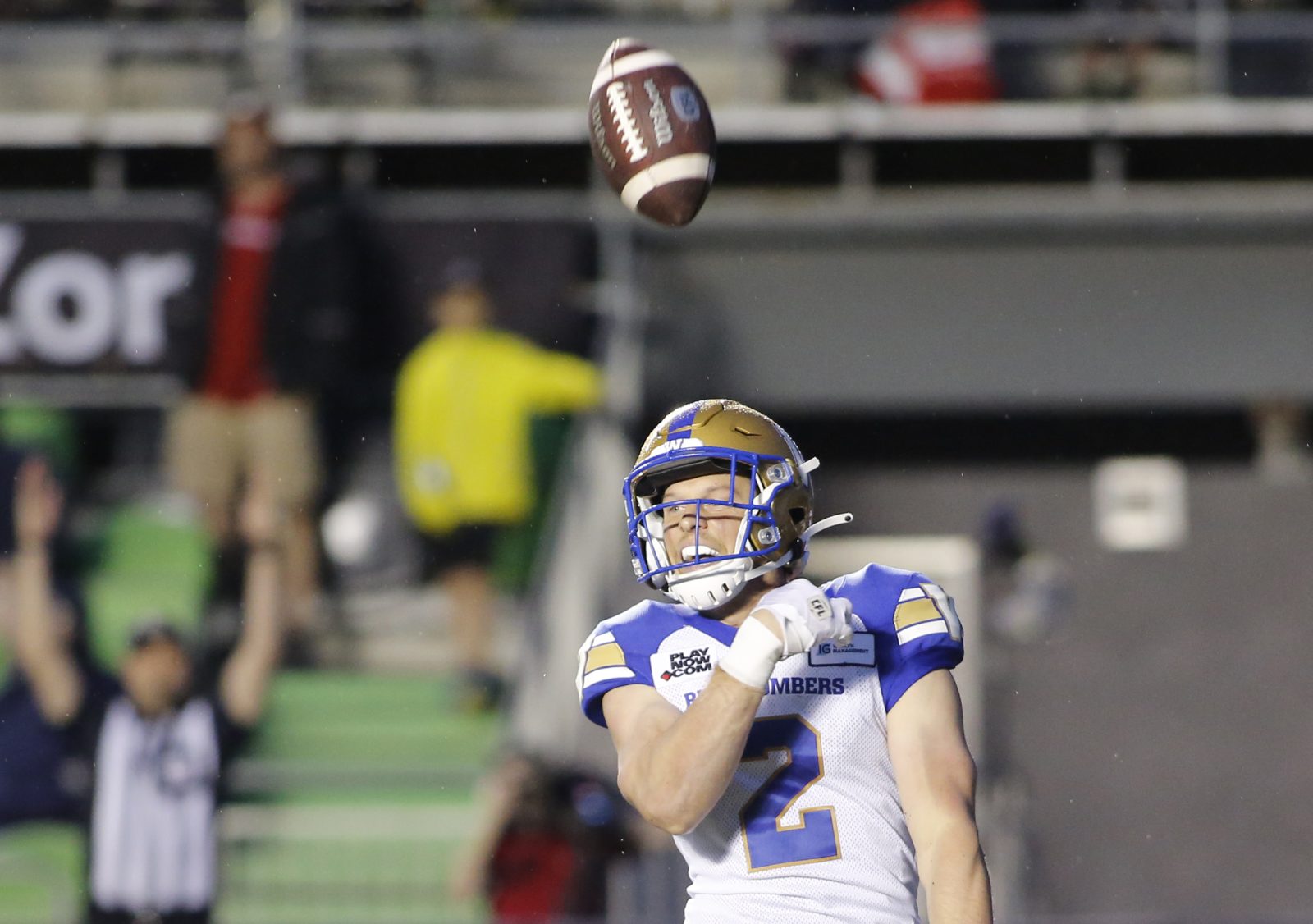 The most telling stat, related to the above – the Blue Bombers gave up just 29 points in two games, keeping the RedBlacks out of the end zone Friday in Ottawa and limiting them to just nine second half points over the first two weeks.

“We made some adjustments at halftime, got everyone to calm down a little bit, stop taking them on the chin and be able to make some plays of our own,” said Adam Bighill. “The key was trying to win first down more and then be in more manageable situations. Overall we made some good changes that yielded good results.”

A MOMENTOUS DRIVE AND A BIG RUN… were a couple of the moments that O’Shea and the players referenced post-game as being critical.

Winnipeg’s first five drives on Friday night featured four punts and an interception. But just before halftime the club pieced together a nine-play 71-yard drive that was capped by a Collaros-to-Greg Ellingson TD strike.

“It was big for us,” Collaros said. “I’m not a denier of momentum and I think it was big coming into halftime moving the football for us like that offensively and getting a little spark there.

“We went down the field (after that) and kicked a field goal on our first drive (of the second half). You always want to score points on the first drive after halftime. That was big as well.”

The other play that O’Shea gushed about was a 12-yard run by Nic Demski in the third quarter that had disaster written all over it. The veteran slotback was running outside and had nowhere to go before putting his head down and grinding and churning for the yardage.

“… The other play I’m thinking of now is Nic Demski’s run,” said O’Shea. “He gets stopped basically with no gain or maybe a loss of one and, god, he’s unbelievable. You just love that in him. He’s right on time. We needed that right there and it looks like ‘ugh’ and he just keeps rolling. It’s perfect. I love it.”

THE BOMBERS MANAGED TO CHURN OUT… 115 yards along the ground on 26 carries, averaging 4.4 yards per rush. Brady Oliveira had 48 yads on 14 carries, while Johnny Augustine finished with 43 yards on seven carries.

A chunk of that yardage came without centre Michael Couture, as he had to leave the game due to injury and was replaced by Chris Kolankowski. An update on Couture likely won’t come until next week in the days leading up to Friday’s home date with the Hamilton Tiger-Cats.

“(The run game is) important to our offence and really getting the guys going up front,” said Collaros. “I thought Chris (Kolankowski) did a great job stepping in for Mikey when called upon.

A COOL SCENE AFTER THE GAME… as O’Shea finished up his session with the media just before Dalton Schoen was up for interviews. O’Shea spotted Schoen, grabbed one of his shoulders and then vigorously shook the receiver’s hand.

Schoen finished the night with two receptions for 58 yards, including a critical fourth-quarter TD that was his first in the CFL.

“It always feels good to make some big plays in crunch time and help your team win a game,” said Schoen. “That’s why I’m here, that’s why I play football.”

Schoen, FYI, kept the TD ball and said it would be going up somewhere in his parent’s house. Asked what they have seen from Schoen through two games, O’Shea added this:

“Exactly what we thought we were going to see from him after the first few days of training camp. He’s a pro. He certainly plays above his age and experience level in this game. Very early on in training camp he demonstrated professionalism and execution, the kind of shape he’s in, his willingness to learn. He’s a winner in that regard, that’s for sure. He’s good to be around and I’m glad we got him.”

AND FINALLY… the Blue Bombers got a whole lot nastier on special teams – and deeper along the defensive front – when the club announced Saturday it had signed Thiadric Hansen to a two-year contract.

Forget that he is a Global player in a league still discovering international talent. Just know that Hansen is a popular player in the locker room and a physical force who can be a difference maker. Hansen will join the club for his third season and did not miss a game in the last two championship seasons.