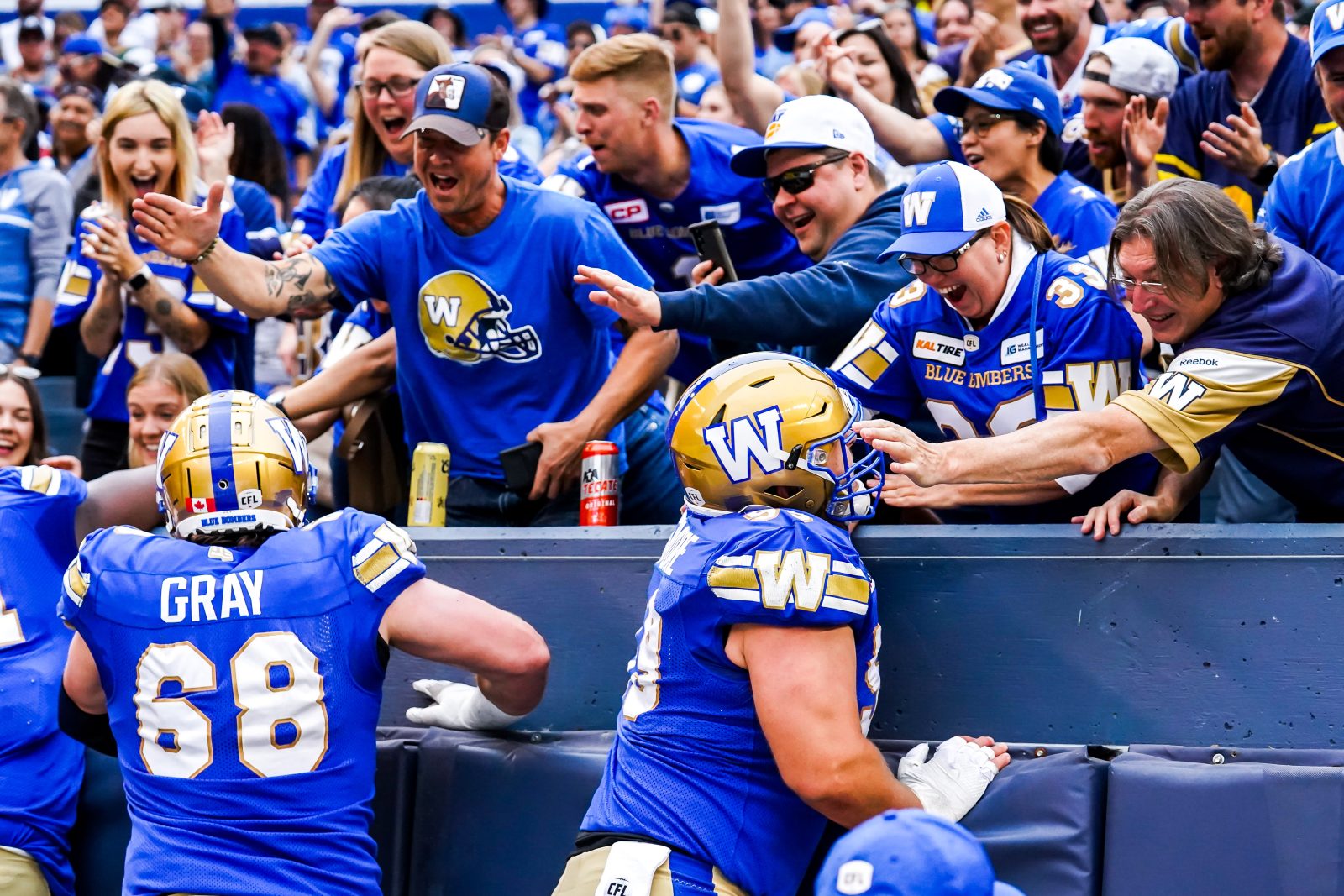 A game story lede that was in progress late Friday night and then instantly deleted after the dramatic rally by the Winnipeg Blue Bombers in the final two minutes of their season-opening win: ‘On a night in which they unveiled their back-to-back Grey Cup championship banner honouring and celebrating their past achievements, it’s the present the Blue Bombers need to get to work on ASAP.’

In essence, the storyline doesn’t change in the wake of the thrilling 19-17 victory over the Ottawa RedBlacks. It’s just that – as head coach Mike O’Shea said immediately afterward – ‘… I’d rather have the two points and have a lot of hard conversations coming up than not get the two points.’

Let’s be honest here: the Blue Bombers were hardly the picture of precision in their 2022 curtain raiser. But they showed their championship mettle when it mattered most to knock off a RedBlacks squad which is vastly superior to the squad that finished last in the East Division a year ago. 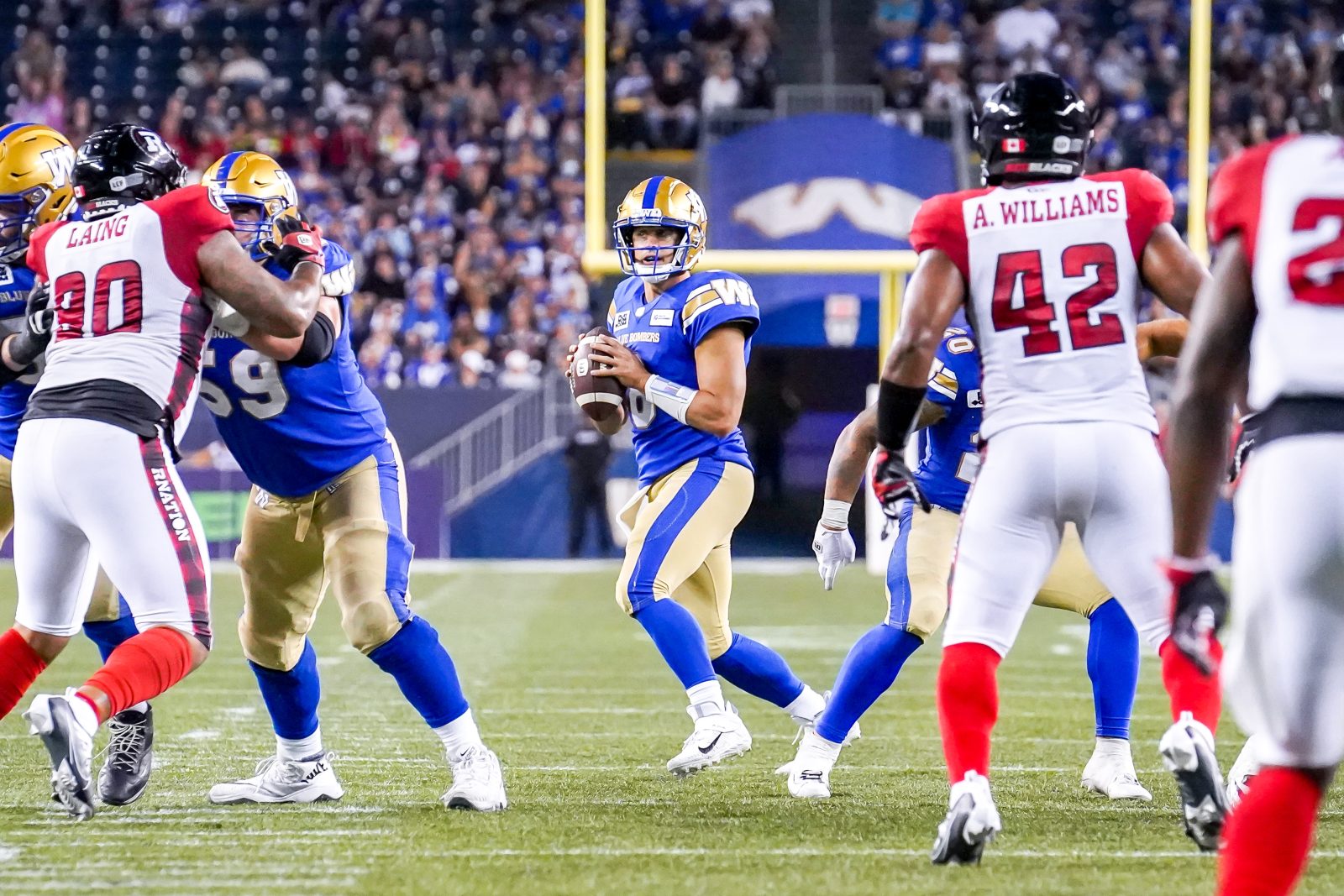 How the ending unfolded – with Dakota Prukop scoring the go-ahead TD on a sneak, only to have Marc Liegghio miss the convert, Lewis Ward then put Ottawa ahead, with Zach Collaros taken from the game by the CFL injury spotter before Dru Brown went 3-for-3 to put Liegghio in position to earn some redemption and deliver the game-winning kick – made for a classic finish.

But there’s a lot on the to-do list heading into next Friday’s rematch with the RedBlacks in Ottawa.

“I don’t think we played particularly well,” said O’Shea. “I don’t want to speak for any other coach (on his staff), but we didn’t play well.”

Asked to describe the flow of the game, and the stagnant stretches he added:

“Not flowing is really what the game felt like. I don’t think we really got in a rhythm much. I guess there were fits and spurts on a couple drives, but all three phases (offence, defence, special teams) would have liked to have played better and the film will show that. There are some easy things to fix.” 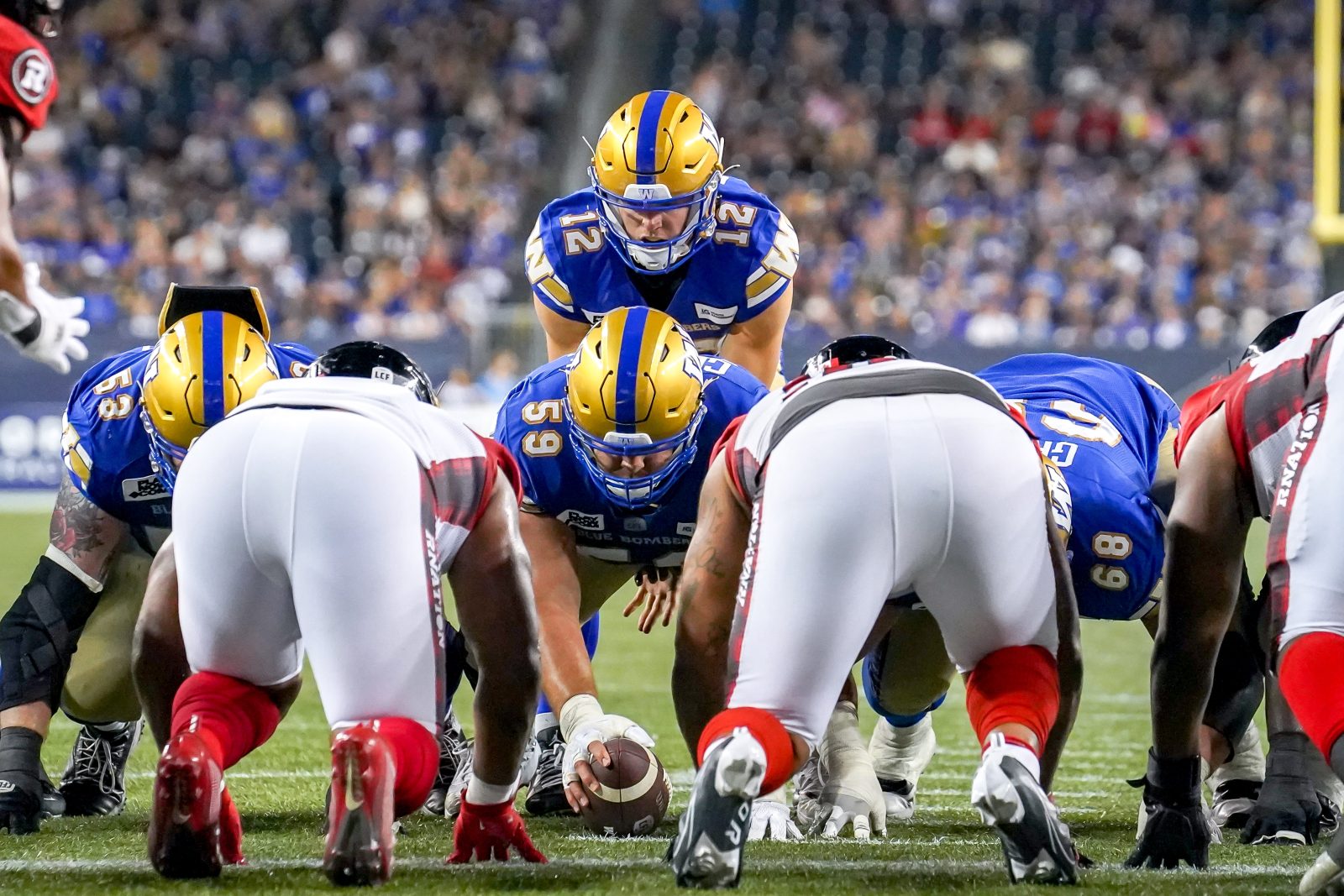 ZACH COLLAROS SEEMED READY TO GO BACK INTO… the game after being pulled by the CFL’s injury spotter, but with Brown & Co. having already driven into field goal range, O’Shea said he wasn’t going to insert him just to hand the ball off to Brady Oliveira, which was the final offensive play before Liegghio’s winner.

The good sign: the CFL’s Most Outstanding Player was one of the first to congratulate Brown for his work, stayed on the field to speak to players from the RedBlacks, and was with his family after the game. He was not available to speak to the media afterward.

In any case, here’s how O’Shea explained what unfolded in those critical moments when he was told to sit out for three plays:

“There’s an injury spotter in the command centre in Toronto and they can review any play and they can zip down to the head official and get a player to the sideline to be looked at. It’s a player safety measure and they obviously felt he wasn’t ready to go, so they pulled him.”

What’s worth asking in the aftermath is if Collaros was pulled from the game for the head shot he took in a collision with Frankie Griffin and Randall Evans of the RedBlacks after a 10-yard run in which he slid helmet first, why wasn’t there also an unnecessary roughness penalty on the play? There was another incident earlier in which Dalton Schoen fumbled after taking a head shot that actually saw his helmet fly off on the play. 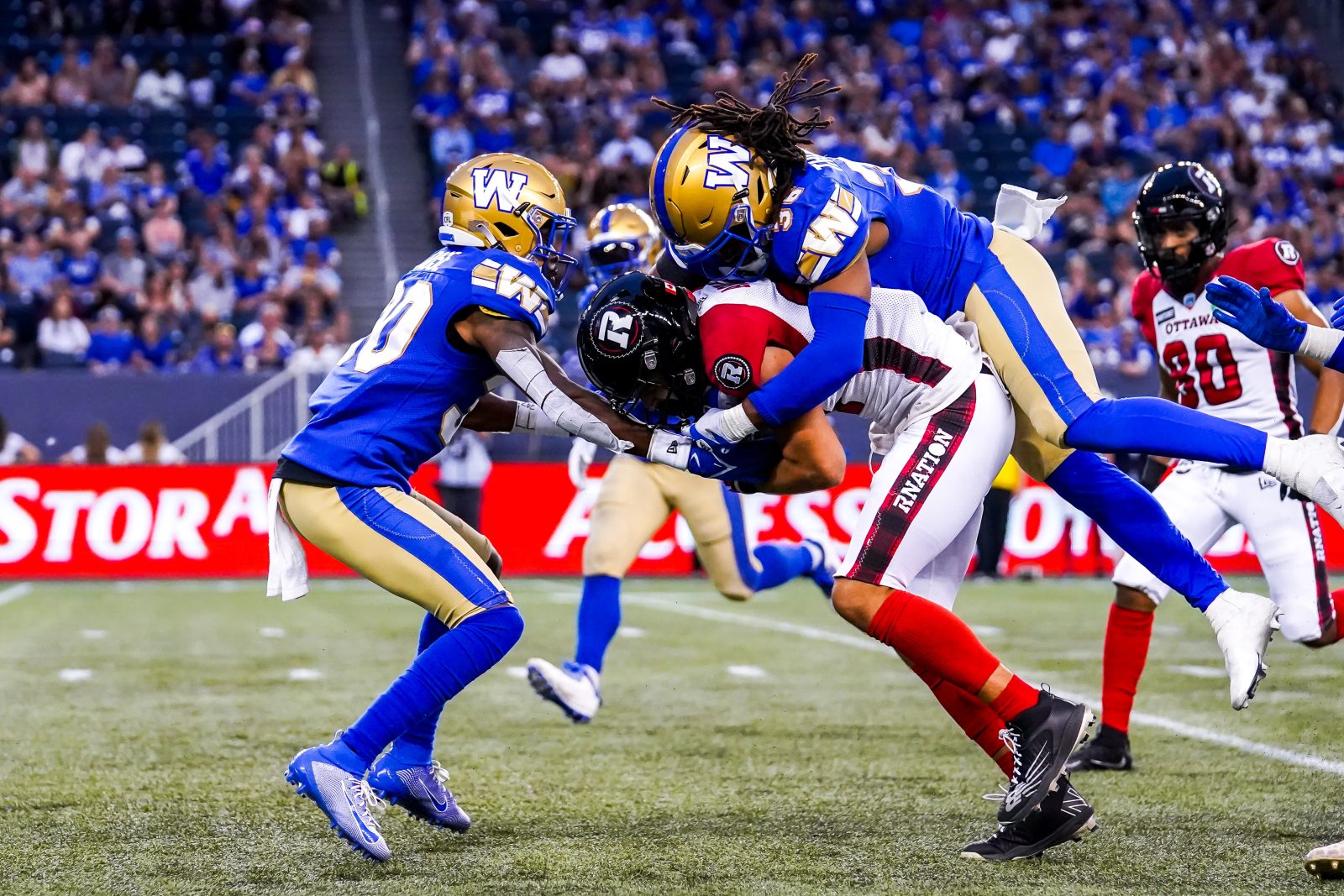 THE REDBLACKS ALREADY LOOK LIKE AN EAST DIVISION CONTENDER… and a big part of their success Friday night came from the work of veteran QB Jeremiah Masoli, who followed new GM Sean Burke to Ottawa from the Hamilton Tiger-Cats.

Masoli finished the night going 24-of-34 for 380 yards with a TD strike to Shaq Johnson and one interception, by Nick Taylor. That 380 yards surrendered through the air was more than any total the defence allowed a year ago and the most since the Saskatchewan Roughriders racked up 442 in the 2019 Western Final – another Blue Bombers victory.

Masoli had 11 completions of 10 yards or more, including big gains of 38, 54, and 51 yards as he took his downfield shots while also mixing in some quick strikes.

“My teammates came to talk to me, my brothers, and they let me know that I’m still one of the best in the league and to keep my head in the game and just keep composed… I should have just let the game come to me. I was being eager out there trying to get an interception and just trying to force something that I didn’t have to force.” 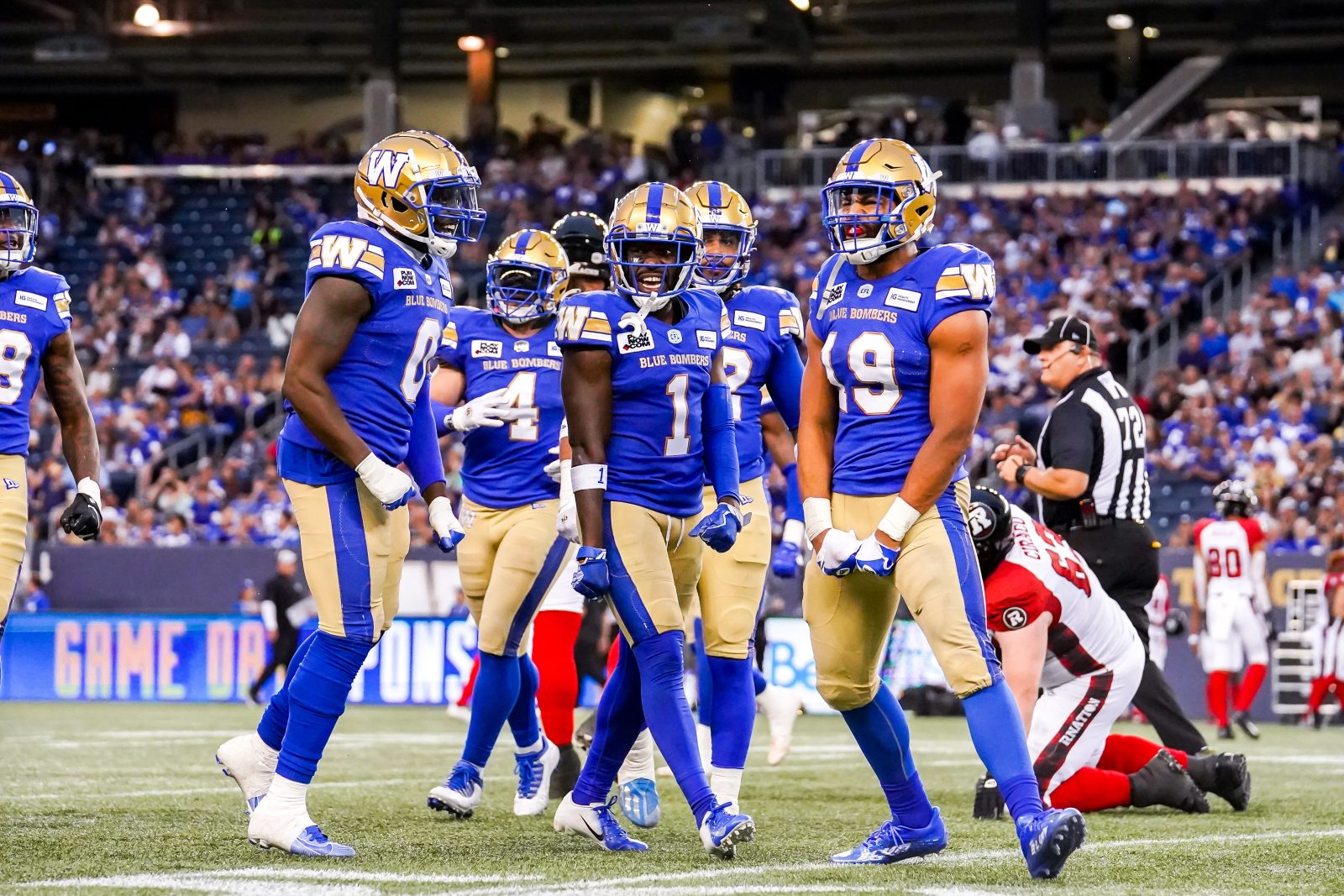 A FEW OTHER NUMBERS WHICH POP OUT… from Friday’s game:

AND, FINALLY… some of the new faces in the Blue Bombers lineup had solid nights, with Schoen finishing with five catches for 69 yards, dime back Donald Rutledge, Jr. registering five tackles and a sack, while veteran receiver Greg Ellingson pulled in six passes for a team best 74 yards and his first TD in Winnipeg colours.

“In my career I’ve been on the other side against Winnipeg, where it’s a tough game and they find a way to win,” said Ellingson. “It’s nice to be on the good guys’ side.

“(The TD) felt nice. At the time going into halftime we were down by one still, but now that we have the ‘W’ it feels good to get a touchdown and it’s nice to start Week 1 by getting into the end zone and getting the ‘W’ for the team.”