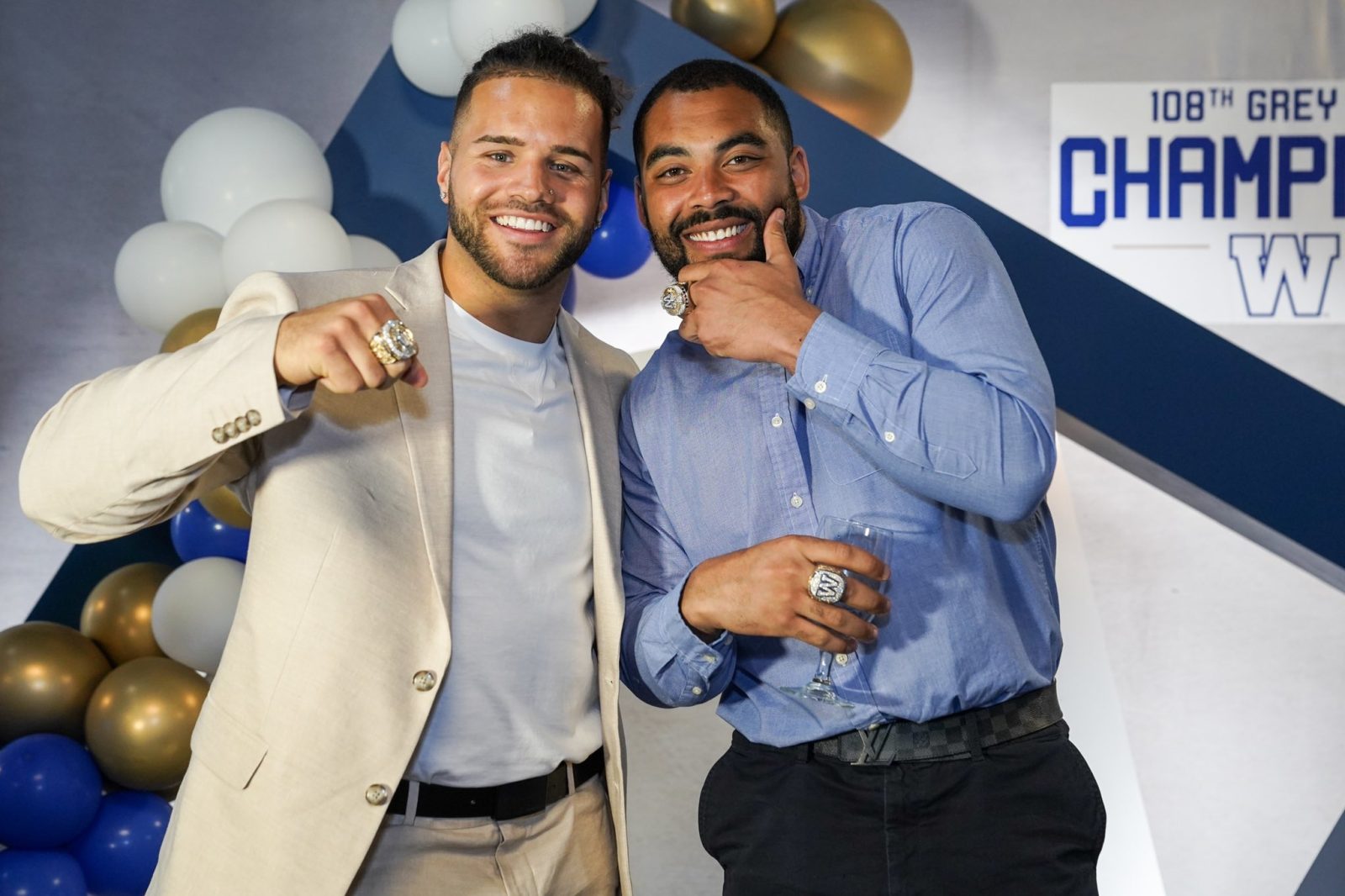 They were a special team that accomplished phenomenal things in an unprecedented Canadian Football League season.

And now the Winnipeg Blue Bombers have an absolutely stunning championship ring to commemorate their 2021 Grey Cup championship.

Players, coaches, management, and football operations staff got their first look at the ’21 championship rings at a soiree held at the Pinnacle Club Saturday night and the instant reaction to the unveiling – a combination of oohs and aahs, gasps and shouts of pure joy – perfectly captured the moment.

“It almost made me break down and cry,” said right tackle Jermarcus Hardrick when he got his first look at the jewelry. “We sacrificed a lot in 2021 and seeing this just makes me love the guys even more and want to do it again.

“That’s a pretty ring, and it’s all about the ring, man. I love everything about it, but what I love the most is the ‘Back-to-Back’ part. I got here in 2015 and for us to be able to do what we did is something I’ll never forget.”

The rings were made by Baron Championship Rings – the same company that helped design and make the 2019 Grey Cup rings for the club – with the help of a design committee that included Adam Bighill, Nic Demski, Willie Jefferson and Rhéanne Marcoux, the Blue Bombers Director, Creative & Content.

Among the design elements worth noting:

“They’re amazing. I mean, I was on the ring committee so I had an idea of what they would look like, but to see it now in person and see how big and heavy it is,” said Demski. “I thought the 2019 ring was big and I love them both, but this one is insane.”

Demski was among the players who opted to get a special slogan inscribed on the inside of the ring along with the Grey Cup score – 33-25 – the team slogan of ‘FIFO’ and ‘For the W.’ Demski’s also reads ‘4 Life’, just as his 2019 ring did.

“These memories last for a lifetime,” said Demski, “and ‘4 Life’ represents the bone you have forever.”

“It’s absolutely beautiful,” added defensive end Jackson Jeffcoat. “They did an amazing job on it, there’s a lot of detail on it and, of course, I love the ‘Back-to-Back.’ I wasn’t sure how you could improve on the 2019 ring, but they did it with this one. It’s sweet.”

The Blue Bombers became just the third CFL team since Edmonton’s dynasty of 1978-82 to win back-to-back championships, following the Toronto Argonauts of 1996-97 and the 2009-10 Montreal Alouettes. 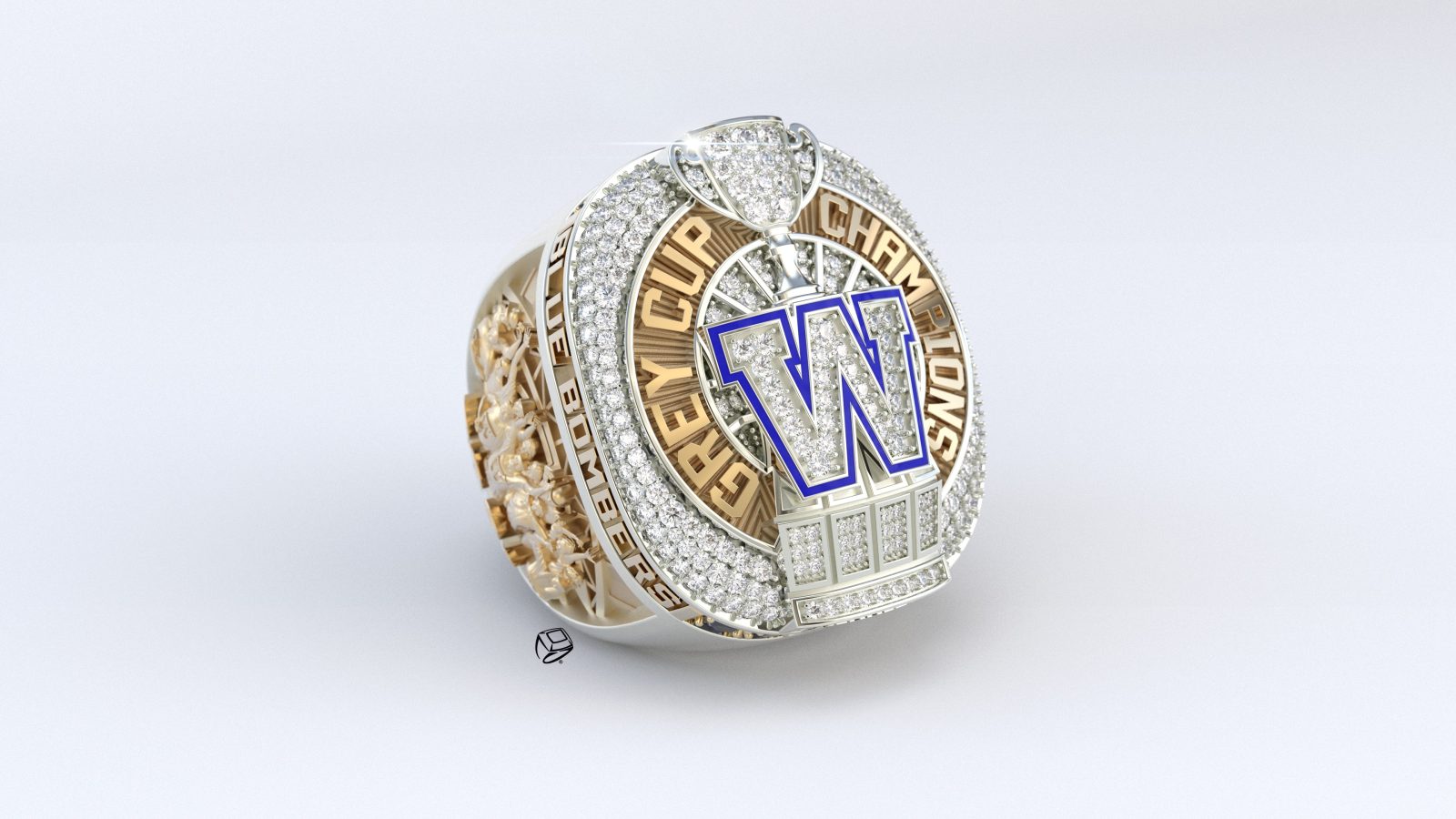 They were also the first Winnipeg team to go back-to-back since the 1961-62 Blue Bombers. And again given the circumstances this team endured to win consecutively – what with their quest to repeat delayed by the cancellation of the 2020 CFL season due to the COVID-19 pandemic and then the 2021 season coming with very restrictive health and safety protocols – only made the accomplishment that much more remarkable.

“This group went through a lot to be able to get this ring on their finger,” said Blue Bombers President and CEO Wade Miller. “They’re a resilient group and they all deserve this. It’s just so great to see them celebrate this together.

“I knew this group would stick together last year going through what they did. They had a lot of stuff to deal with, too, with all the COVID protocols. They just did it, moved on and played some amazing football.”