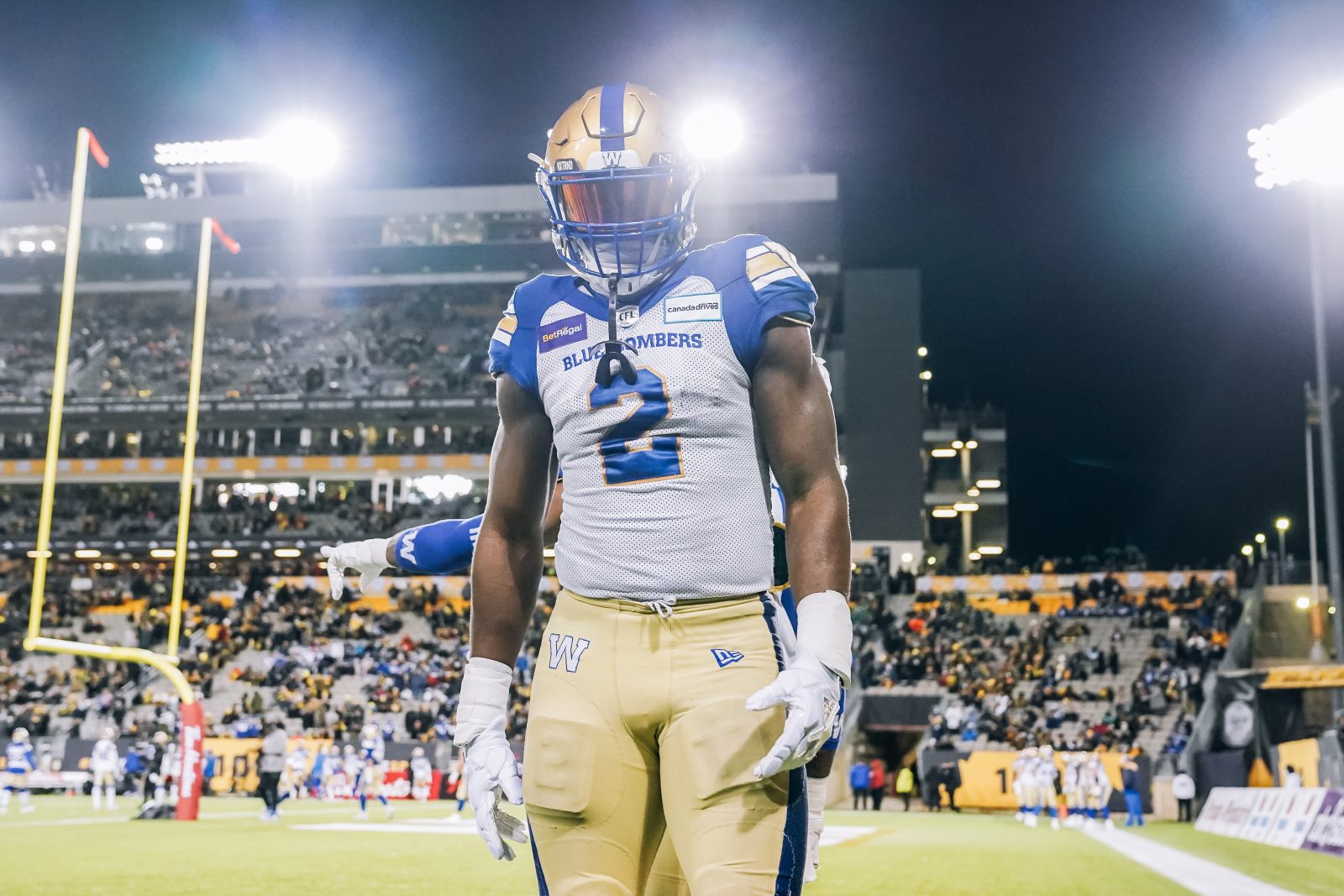 Jonathan Kongbo officially scribbled his name onto a National Football League contract with the Denver Broncos earlier this week, with the whole process taking just a few seconds. Yet that simple act is so much bigger than that, and the moment represents so much more for the now ex-Winnipeg Blue Bombers defensive end.

It’s about hard work and dedication, sure, but it’s also about a long and winding road travelled, one that officially began thousands of kilometres away in Kinshasa.

“I’m a kid from Kinshasa, Zaire at the time – now the Democratic Republic of the Congo now,” began Kongbo in a chat with bluebombers.com on Friday. “So, you mention the road travelled and the journey… it was fleeing war as a kid with my family, immigrating to Canada, having to learn a new language and fit into a different society. Then it was being able to graduate high school, which was a big thing, because it was a difficult for me to make it to college and then not only make it to college but graduating as well.

“So, when I’m signing that contract there was a realization that this was more than just for me. When I put down ‘Kongbo’ I felt like I was not only representing my family, but in a lot of ways the immigrant story of an immigrant kid, Africa as a whole, Congo. I don’t know, maybe this helps open up a path for others as well where people say, ‘If he did it, maybe I can do it, too.’”

Kongbo has remained in Winnipeg since the Blue Bombers second consecutive Grey Cup win last month to work out and continue to train. He was actually running the stadium in -28C temperatures when the Broncos called asking him to fly to Denver. He worked out for Broncos staffers, they followed up with some questions and not long after his agent called to say they were making him a contract offer.

“It all happened so fast I really can’t believe it,” Kongbo said. 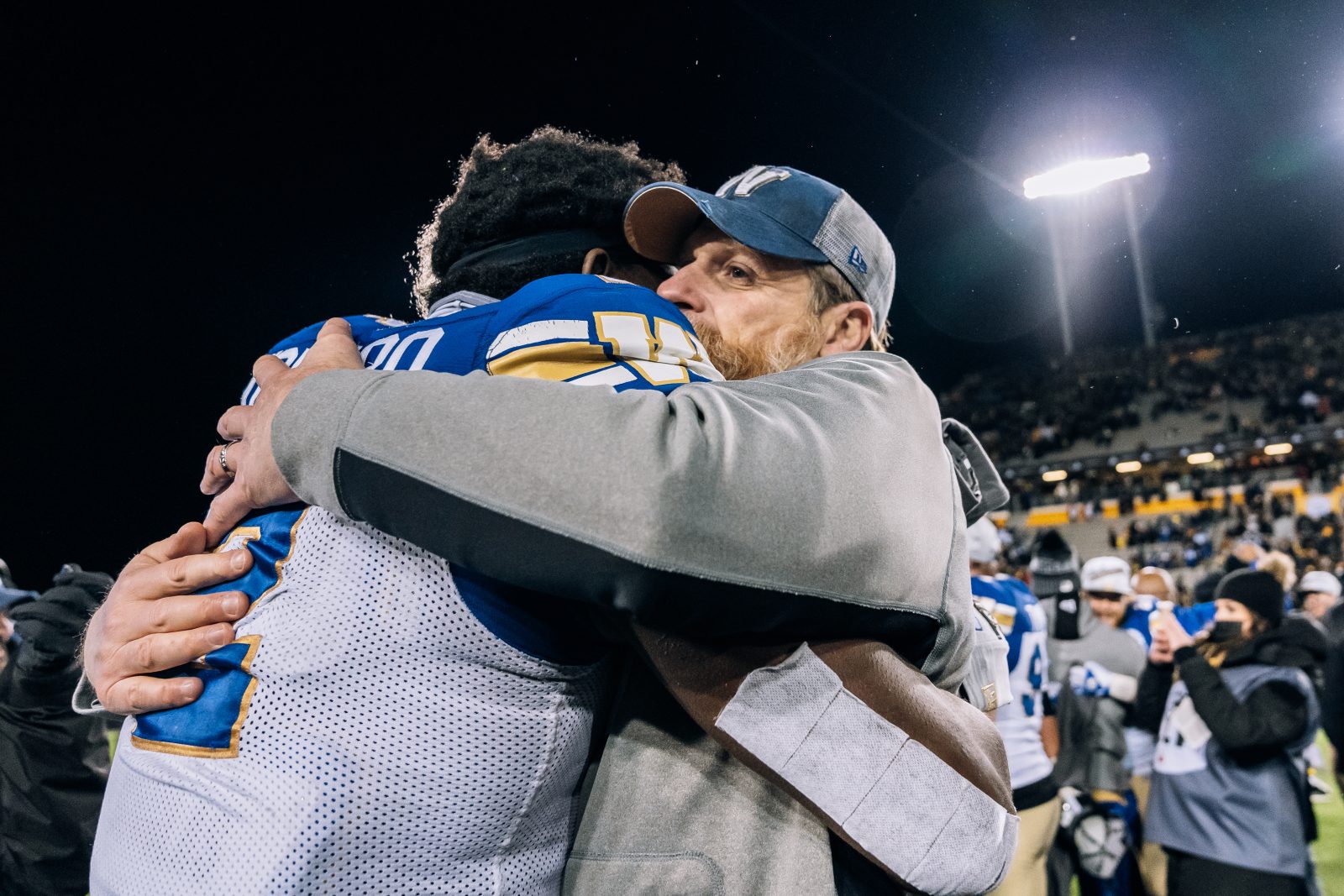 Interest from the NFL isn’t new for Kongbo. He was a rising draft prospect in his senior season at the University of Tennessee when he blew his knee out in a game against Auburn in October of 2018.

“It’s amazing how things work sometimes,” he said. “The day I got hurt I was having probably the best game of my college career. I had an interception, a sack and two TFLs (tackles for loss) going into the third quarter. Then I get hurt and afterward the doctor told me I had torn my ACL and MCL and that meant no Senior Bowl, no combine workouts. And so, to go from that moment to signing this week it is like one extreme to another.

“But things happen for a reason and I’m so thankful I had my two seasons with the Bombers. It made me a better player, a better person and we won two Grey Cups.”

Kongbo’s ceiling still remains limitless. Remember, when his family first came to Canada, settling in B.C., he concentrated mainly on playing basketball and didn’t play his first football game until his senior year of high school. He played his freshman year at the University of Wyoming and transferred to Arizona Western College after his freshman year before landing in Tennessee.

The injury in his senior season took him out of conversation for the NFL Draft, but the Blue Bombers grabbed him in the first round, 5th overall, of the 2019 CFL Draft. He worked tirelessly with the Bombers’ athletic therapy staff to rehab his knee and made his debut in August of that year. By season’s end he was a rotational player along the Blue Bombers deep defensive line and made a couple of critical goal-line plays in Winnipeg’s win over Saskatchewan in the 2019 Western Final.

His work earned him a shot with the San Francisco 49ers in 2020 and he was moving up their depth chart in training camp when he suffered a groin injury, leading to an injury settlement, his release and then a return to the Blue Bombers for 2021.

“Being with the 49ers will help me this time with the Broncos because I know I belong,” Kongbo said. “I understand now that the difference is small between playing down there and playing with the Bombers and in the CFL. Maybe this time I’ll be a little less nervous because I’ve been through it before and I understand even more the importance of taking care of my body throughout the process and doing all the little things, everything possible, to take care of myself and be a professional along the way.

“But going through that with the 49ers… it was meant for me to come back to Winnipeg a second time and win another championship. Things like that give you the confidence that all the hard work you put in matters, that it’s meant for something greater than that.”

The last few days have had Kongbo’s head spinning. His future may be in Denver, but he’s leaving a lot of memories in Winnipeg. And a brotherhood, too.

“I’ve heard from the guys… Jackson (Jeffcoat) reached out to me, Willie (Jefferson) reached out to me, Biggie (Adam Bighill)… pretty much all the guys who wanted to wish me well and that the hard work paid off,” he said. “It meant a lot hearing from those guys. It is a brotherhood, it really is. And I just know they’re going to run this three-peat, so I’m really excited for those guys.”