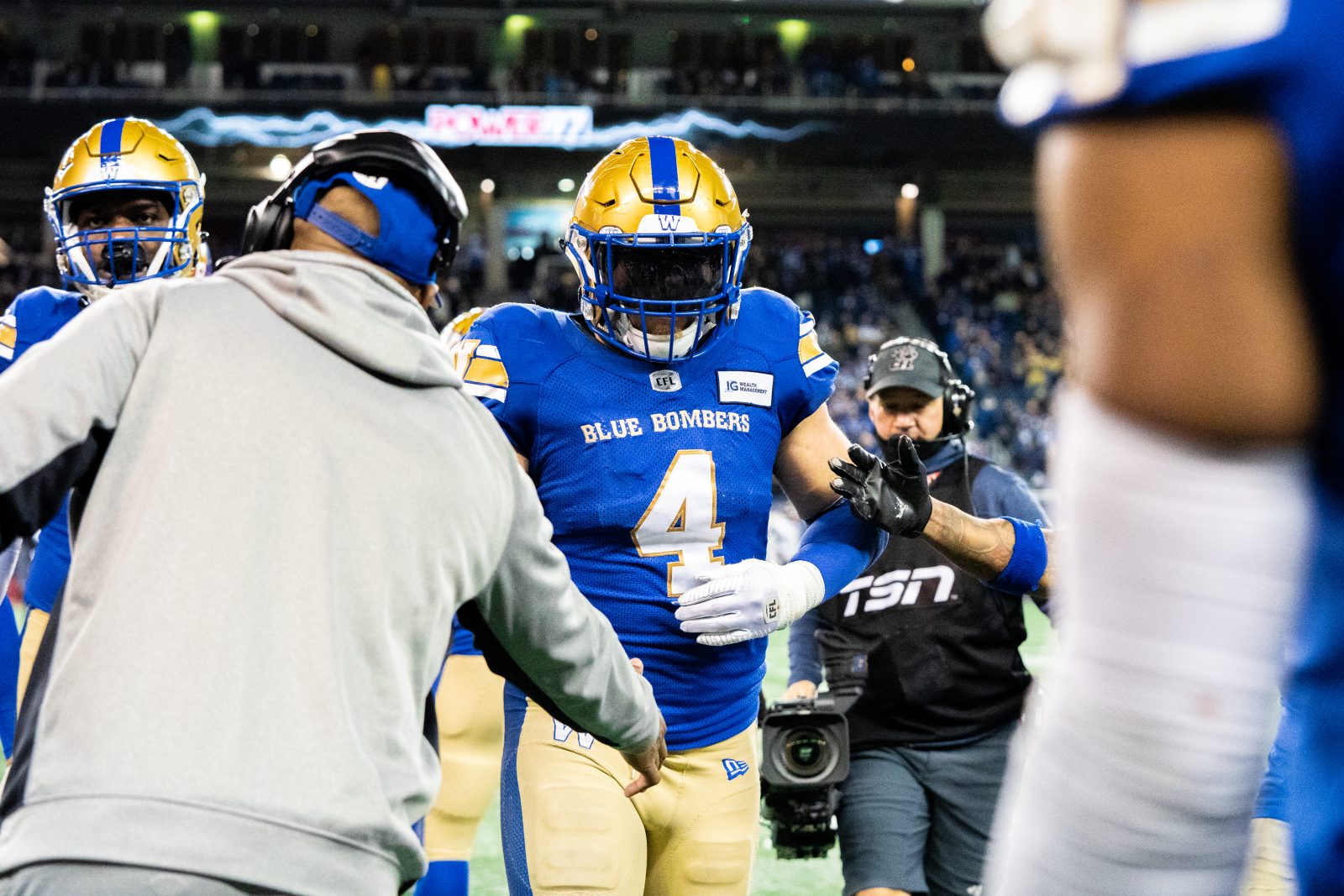 They are moments and experiences Adam Bighill has certainly lived before, as he has often stepped into the bright glare of the spotlight on the grandest of Canadian Football League stages. The Winnipeg Blue Bombers veteran linebacker is, after all, a two-time Grey Cup champion and two-time winner of the league’s Most Outstanding Defensive Player award.

Yet, there was Bighill on Wednesday – not long after he had been named the Blue Bombers Most Outstanding Defensive Player ‑ explaining how momentous the honour was for him given the dominance of the defensive unit and the number of top defender candidates lining up all around him.

“Being named as the defensive player on this team probably means more than it’s ever meant getting a nomination for me,” he said. “Just the amount of guys we have in this locker room that really are candidates… so, it’s very humbling and it’s a great feeling to have that nomination.

“The guys we have here, there’s just so many, between Jackson (Jeffcoat), Willie (Jefferson), B.A. (Brandon Alexander), even if Stove (Steven Richardson) was healthy all year… the things those guys are capable of doing and have done is pretty impressive. As I said, of all the nominations in my career this probably means the most.”

Bighill has never lacked for motivation in his playing career, but he entered the ’21 season with an inferno raging inside his belly. The veteran linebacker battled injury in 2019, had the 2020 CFL season cancelled and then began this calendar year by having to swallow a massive pay cut as part of the league’s financial restraints.

“I’m always motivated by trying to be the best linebacker ever to play this game. I’ve said that a number of times,” said Bighill. “What transpired this offseason… I always play with a chip on my shoulder, it gave me a bit more for sure. I’m not going to say it helped me play better or do anything more, but it’s something where I felt like I still needed to prove I can still play at an elite level and be one of the best players in this league. I firmly believe that. I train every day thinking that. I prepare every day thinking that.

“It does feel good that I went out here and accomplished what I said I wanted to do.”

The Blue Bombers Most Outstanding Defensive Player decision would easily have been the most difficult for the voters – members of the local chapter of The Football Reporters of Canada in Bob Irving of CJOB, Jeff Hamilton of The Free Press, The Sun’s Ted Wyman and Darrin Bauming of Bonfire Sports, along with Bombers head coach Mike O’Shea.

That means, by extension, the Most Outstanding Player Award would have been almost as difficult as the top defender would have had to have been in the discussion for the MOP as well. The vote for Collaros and the vote for Bighill were the two decisions that were not unanimous, FYI, with the other four being slam dunks by the local voters. For Collaros, it marked his third team MOP nomination and first since going back-to-back with those honours as a member of the Hamilton Tiger-Cats in 2014-15.

“As you get older you understand how important these things are and they don’t happen every season,” said Collaros. “And especially being on a team with guys like Adam Bighill, Willie Jefferson, Jackson Jeffcoat, Brandon Alexander, Kenny Lawler, Andrew Harris, Stanley Bryant, Yoshi (Jermarcus Hardrick), Paddy (Neufeld), Mikey (Miller), Drew (Wolitarsky), Nic Demski… I could just name everybody.

“But on a team with so many great players who have had great seasons, to be recognized this way is cool. It’s awesome.”

A look at the Blue Bombers nominees for the CFL’s Most Outstanding Player Awards, as voted on by four members of local chapter of The Football Reporters of Canada and head coach Mike O’Shea…

The East/West nominees will be announced next week following the next round of voting, with the league winners unveiled during Grey Cup week.

His 2021 numbers: Collaros is second in the CFL in passing yardage, despite having missed last week’s game in Montreal, with 3,112 yards and a league-leading 20 TD passes. His QB-efficiency rating of 111.6 is best in the CFL, as is his 70.2 completion percentage. The Bombers are 11-1 in his starts this season and 15-1, including the 2019 playoff run, in games in which he takes the first snap from centre.

His 2021 numbers: Demski has already posted career-best receiving yardage numbers, even in a condensed season and with him having missed one game this year due to injury. He has 44 receptions for 637 receiving yards and four receiving touchdowns and has tied his best season with five TDs overall, including one along the ground.

FYI: Blue Bomber hall of famer Gerald Wilcox posted three straight 1,000-yard seasons from 1993-95 and was the last to crack the 1K mark. Demski’s 637 yards is tied for the second-best yardage total by a Canadian receiver since then, along with Kamau Peterson (2004) and behind the 650 Drew Wolitarsky amassed in 2018.

Nik says: “I definitely had some expectations coming in, given to me and for myself. I feel like there’s still a lot more I can go out there and give. I’m just happy all this hard work is starting to pay off and I just want to keep it going.

“As a Canadian in this league this is one of the awards you look for, and to be on a team with such great Canadians on here is definitely an honour. There’s a lot of hard work that goes into this, but I definitely couldn’t have done this without my teammates as well.”

His 2021 numbers: Bighill has suited up for all 13 games for the Bombers this season and has registered 66 tackles, two interceptions and two fumble recoveries, including one for a touchdown. His tackle totals this season have also moved him into 9th spot on the CFL’s all-time list.

FYI: A Blue Bomber player has been named the CFL’s Most Outstanding Defensive player in consecutive seasons with Bighill being honoured in 2018 and Willie Jefferson in 2019. Given the club’s record and defensive dominance, it’s almost certain Bighill would win this year and it would mark the third time in his career he would be so honoured, including in 2015 while with B.C. and in 2018 with the Bombers.

His 2021 numbers: Bryant had his streak of 102 consecutive starts for the Bombers end last week in Montreal when he was listed as the club’s inactive player. He has been a mainstay on the left side of the offensive line and a key part of an offensive unit that leads the CFL in scoring, ranks second in rushing and has allowed a league-low 15 quarterback sacks.

FYI: Bryant has been named the Bombers top O-lineman for the fourth consecutive season (2017-19, 2021) and fifth time overall, having also won in 2015. Including his time in Calgary, in which he won in 2011 and 2013, Bryant has been his team’s top lineman seven times. Bryant is a two-time winner of the CFL Most Outstanding Offensive Lineman award, winning in 2017 and 2018 as a member of the Blue Bombers, and was also the league runner-up in 2019.

Stanley says: “I’m always honoured to get the nomination for the team. It’s one of the great things to be recognized throughout the league and just on your team. I’m excited for it. Coming into this season you never know how things are going to go. A year off, guys coming in not being themselves… I’m just happy to get the nomination and show I can still play the game of football.”

His 2021 numbers: Has authored a superb rookie campaign with the Blue Bombers. The Tusculum University product came straight to the CFL after college and has started all 13 games this season, lining up at both cornerback spots.
Alford is currently tied for second in the CFL in interceptions with four, including one for a touchdown in a win over the Edmonton Elks. His 45 tackles ranks third on the club, behind only Bighill (66) and Deatrick Nichols (46).

DeAundre says: “It’s a blessing. It’s an honour to get an accolade like that. It’s just showing that my hard work is paying off.”

Mike says: “It’s definitely an honour to be nominated again. We’ve got such a good team there’s a lot of guys who are just as deserving as me. We got lots of guys who are great special-teams players on this team and do a helluva job.”

For a look at the team-by-team nominees for the CFL’s Most Outstanding Player Awards, click here.