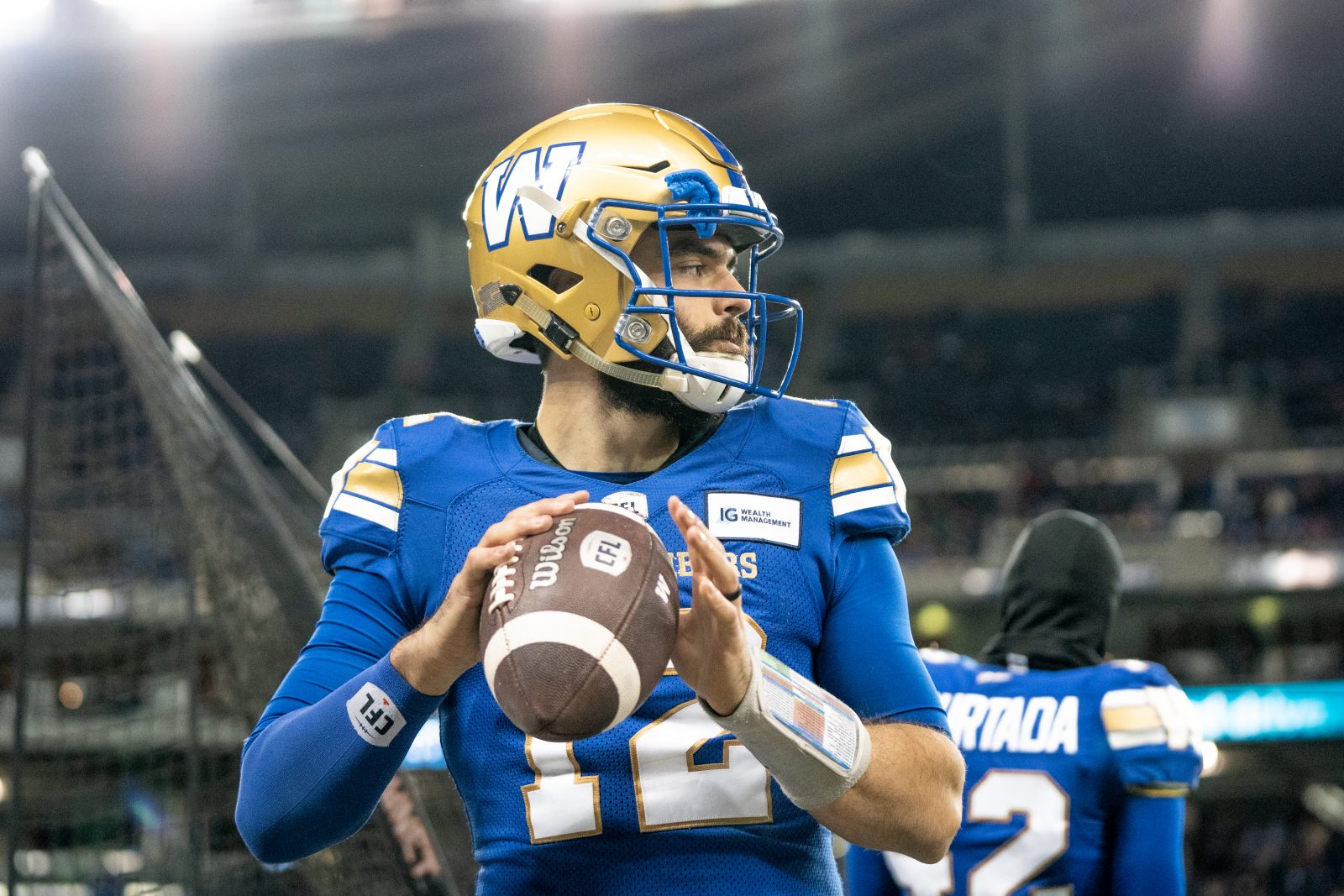 Quick Hits from Wednesday: Day 1 of the Blue Bombers practice week — and a closed to the media session — leading up to Saturday’s date in Montreal against the Alouettes…

1. STEP RIGHT UP, MR. McGUIRE: The Bombers made it official after Wednesday’s closed practice session: Sean McGuire will make his first career start at quarterback in place of Zach Collaros this Saturday in Montreal.

Now in his second season for the Bombers — he’s dressed for every game in 2019 and this year — McGuire has attempted just 10 passes over that span, completing four for 72 yards with no touchdowns and no interceptions. He’s become the Bombers short-yardage specialist and his eight rushing touchdowns leads the CFL.
“I’m grateful for this opportunity,” said McGuire after practice. “It’s awesome how it worked out this year, being a backup and a lot of guys get to play in different ways. And, shoot, I mean, what else could you ask for being on a team that’s clinched the West and has got a quarterback that’s healthy and guy you can learn from like Zach?
“And now you’re in a position where you can go out and and play and try to win this week for our team.. again, I just feel really grateful for that.”
It’s yet to be determined whether Collaros will even make the trip — his wife is also expecting their second child — meaning rookie Dru Brown could dress as McGuire’s back-up.
“We’ve liked him for a couple years now,” said Bombers head coach Mike O’Shea of McGuire. “We think he can step on the field and we believe he can help us win football games. He’s a pro. He comes in every day, puts in the work and when he steps on the field he’s got good command of the offence, he throws the ball well, he’s always prepared. It is a good opportunity for him.”

2. GLOWING ENDORSEMENT: The CFL released its list of players eligible for the Most Outstanding Rookie award last week and at or near the top of that list is Bomber cornerback DeAundre Alford. FYI, Deatrick Nichols –another newcomer who played much of the season alongside Alford before the arrival of Winston Rose — is not eligible because he suited up for two games with the Arizona Cardinals in 2018. 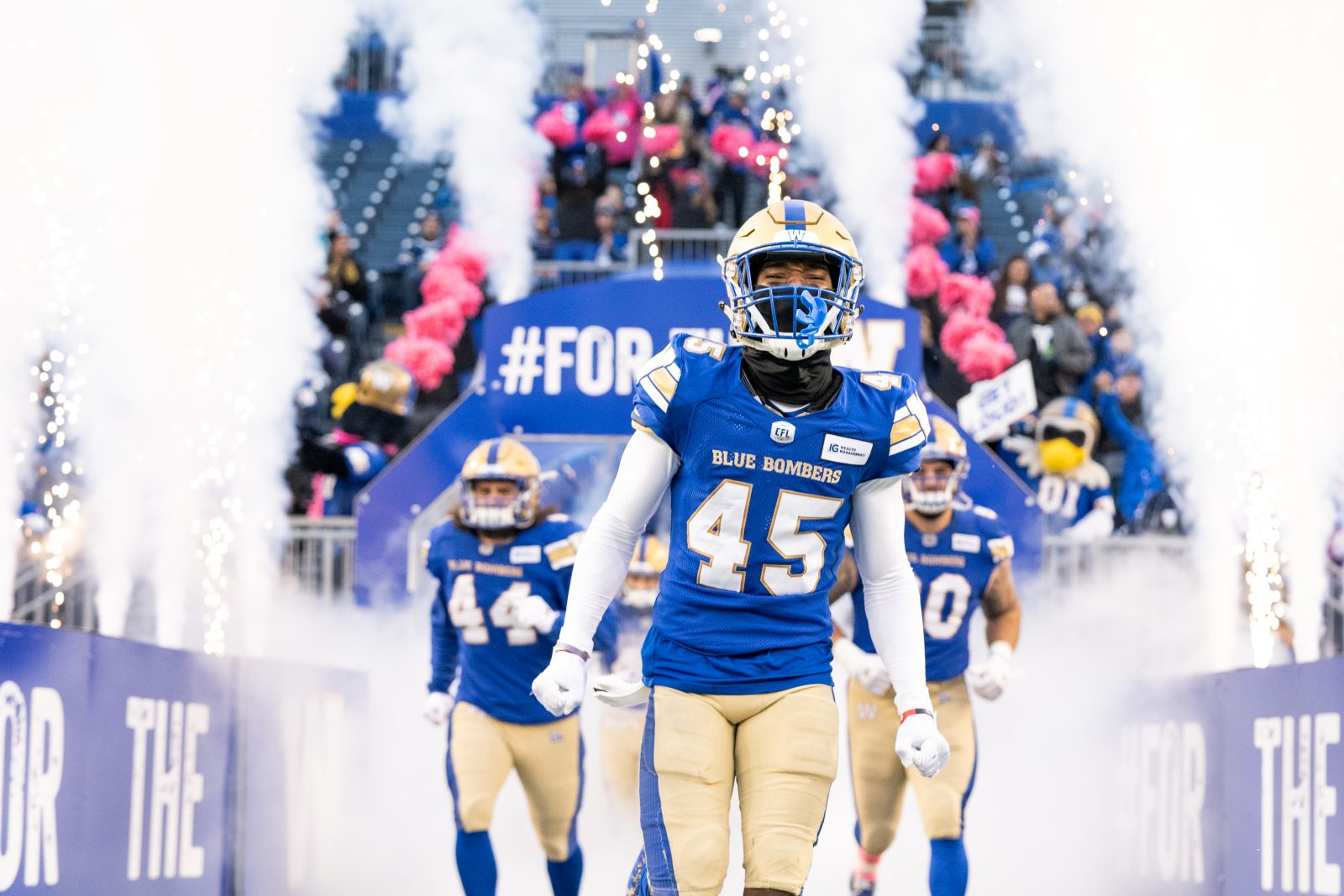 But Nichols was asked to give a plug for Alford on Wednesday.
“I feel like if I couldn’t win it he most definitely better win it,” said Nichols with a grin. “So, my vote goes to him. We came in together and he was always a great player, he always listened, learned and put put the game first. He’s a great guy. He makes plays and he loves the game as well, just like everyone else around here. Most definitely my vote goes to him, if I had a choice.”

3. MEET ME IN MONTREAL: Drew Wolitarsky, who just so happens to room with McGuire on the road, scored his first TD of 2021 in last week’s win over Montreal. This weekend he returns to a place where he had his first multiple-TD game, back on June 22, 2018 in a 56-10 win over the Als.
Montreal also has a soft spot for the veteran receiver, as his mom is from there and it’s there where she first met his father. Both his parents will be in attendance on Saturday. 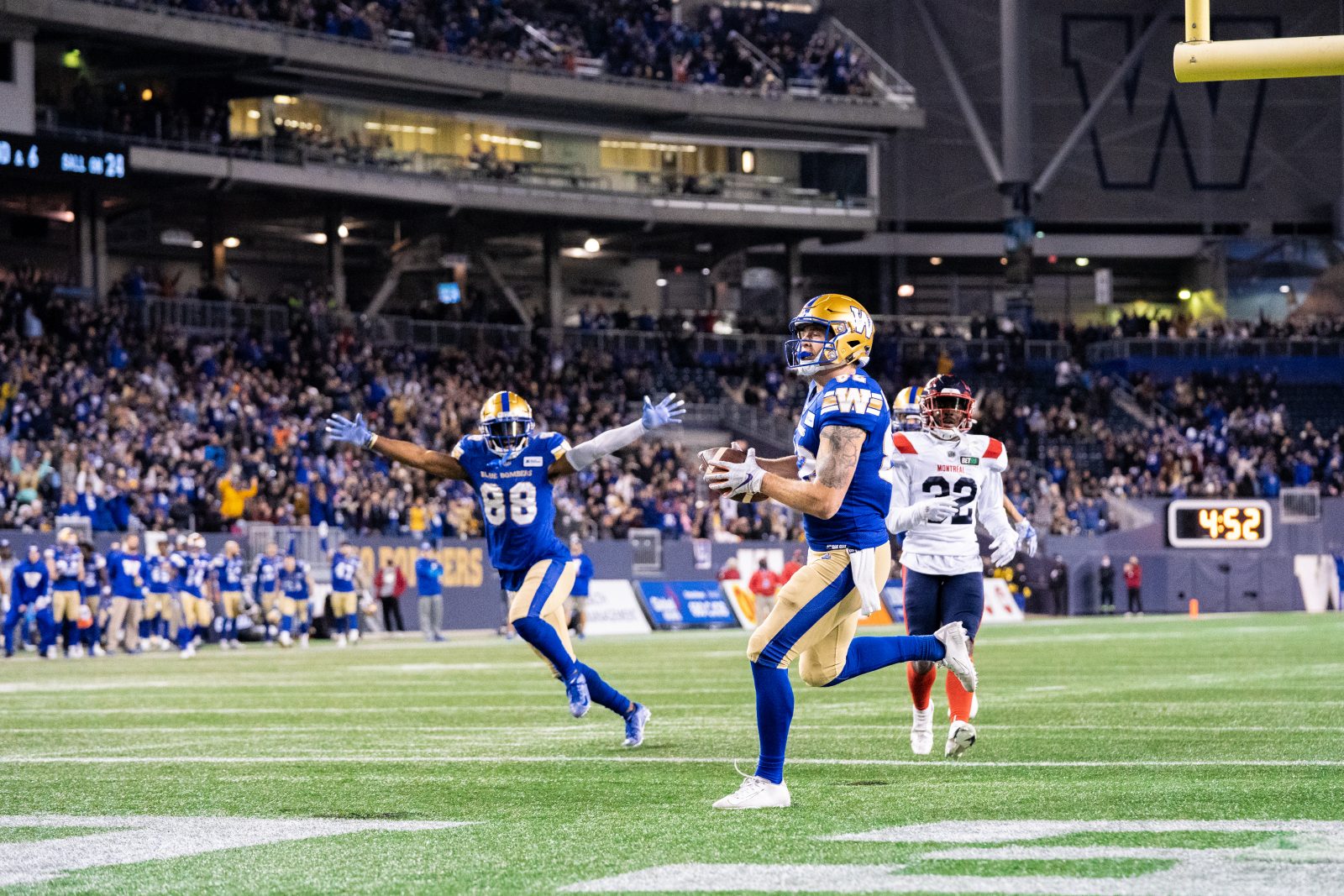 Interestingly, four of Wolitarsky’s 10 career TDs have come against the Alouettes.
“I don’t know what it is… maybe it’s my parents growing up there and them sending me good juju before the game,” said Wolitarsky with a smile. “It’s always a fun time up in Montreal for me, man. It seems to be a good spot for me. My family is actually going to be there and my dad’s birthday is on 11-11 (November 11th), so it’s a pretty unique weekend for us and it will be exciting.”

4. ICYMI: Earlier this week the CFL announced its Top Performers for Week 14 and included among them was Bombers linebacker Adam Bighill, who racked up eight tackles and his second interception of the year.

What Bighill did was outstanding, to be sure, and it also just further muddied the picture for the Bombers Most Outstanding Defensive Player Award. Bighill leads the Bombers with 65 tackles — tied for fifth in the CFL — and has his pair of interceptions, two sacks and a touchdown.
Jackson Jeffcoat has nine sacks — one off the league lead, held by Saskatchewan’s Jonathan Woodard — and has a league-best four forced fumbles and 26 tackles, tops among Bomber D-linemen. Willie Jefferson, meanwhile, continues to be an offensive game plan-wrecker — he has seven sacks, three forced fumbles, two interceptions and a touchdown.
That’s a tough call for the Bombers top defensive honours — safety Brandon Alexander should also get consideration — and one of the most-difficult votes for the award in eons.
The team-by-team Most Outstanding Player Award winners will be announced next week, FYI.

5. ICYMI, PART DEUX: The Legendary Bob Irving of CJOB made official Tuesday what has been expected for months — the voice of the Blue Bombers is retiring after almost 50 years in the business. In case you missed it, here’s the sit-down interview with the man known as ‘Knuckles’: