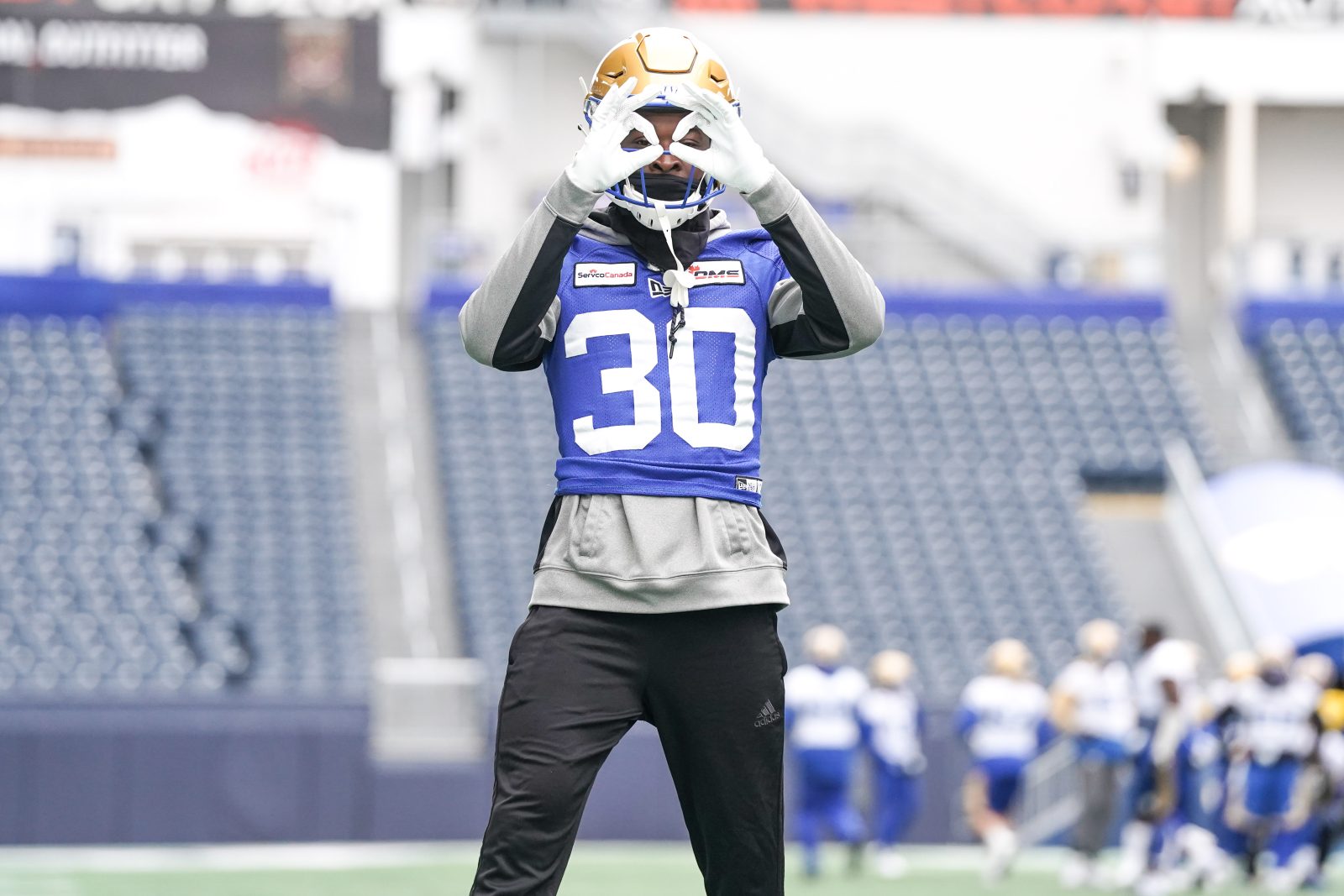 Quick Hits from Tuesday: Day 1 of the Blue Bombers practice week leading up to Saturday’s home date with the Montreal Alouettes…

1. WELCOME BACK, FELLAS: The Bombers opened their post-bye practice week with two familiar faces on the field for the first time this season in kicker Sergio Castillo and cornerback Winston Rose.

Castillo, who was in Winnipeg for half of 2015 and then half of 2016, was acquired in a trade with the B.C. Lions and he went 5-of-5 in his field-goal attempts at practice, including hitting a 55 yarder that bounced off the crossbar and through. Worth noting: Ali Mourtada also had a good day kicking as well.
“Me coming here, I’m just going to do whatever they ask me to do,” said Castillo. “And if it’s kickoff, field goal… whatever it is I’ve been practicing when I’ve been at home for this opportunity and I’m ready to roll.” 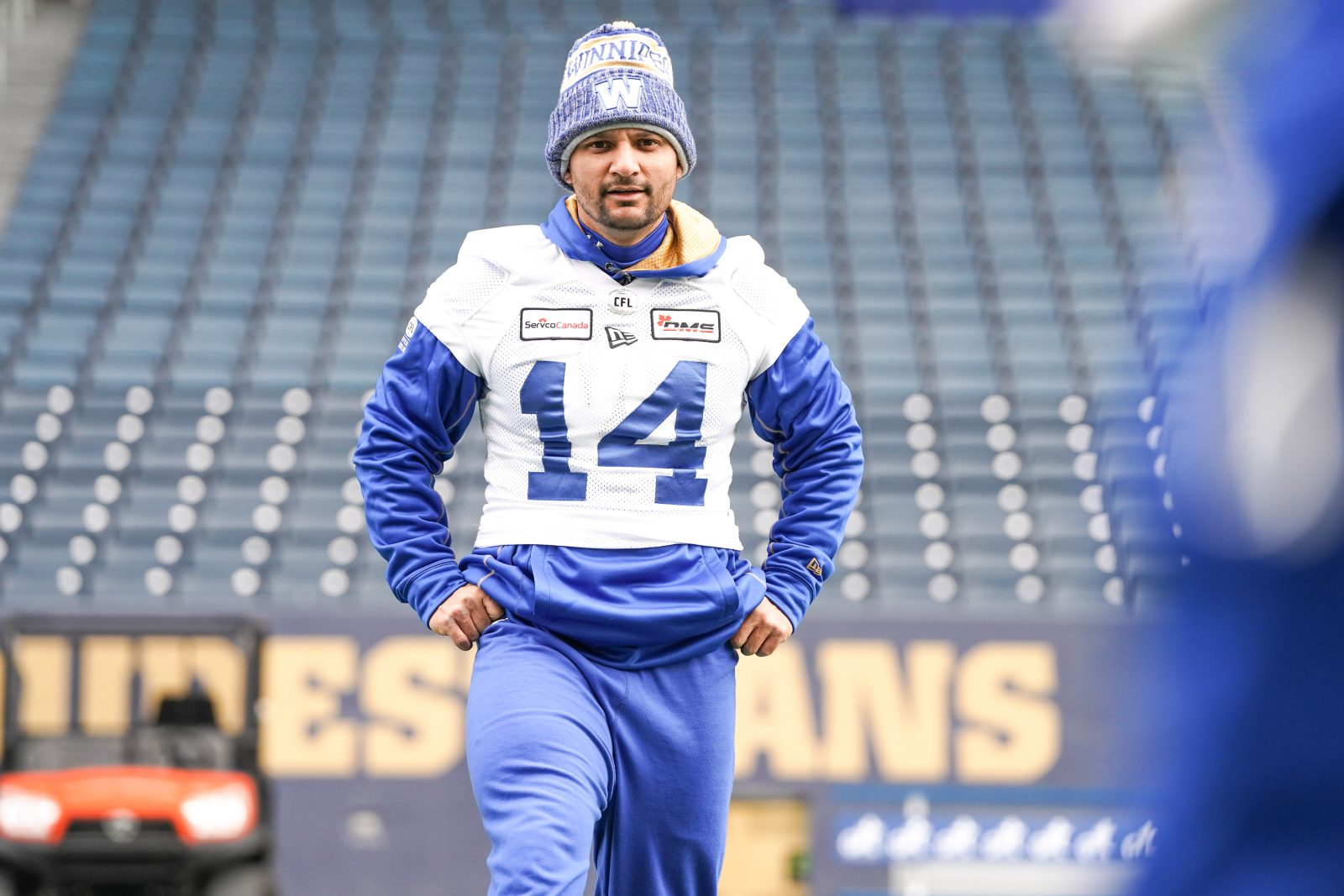 Rose, meanwhile, returned to the secondary and his arrival did result in some shifting of personnel. Rose was lining up at his old boundary side of the secondary alongside Deatrick Nichols with DeAundre Alford flipping to the field side beside Nick Taylor. Mike Jones did take some work at corner, but got most of his reps at halfback with Alden Darby remaining as the Dime back.
Asked about how he ended up back in Winnipeg following his release by the Cincinnati Bengals, Rose said:
“All season long I’ve been keeping up with the season and pretty much with Winnipeg. So after I got released from the Bengals, it was by like a month or two where I was at home and I decided just to contact my agent and ask him if it was possible that I could still go back to CFL and potentially play for Winnipeg again and compete for the Grey Cup. Once he gave me the OK and contacted some some people up here, it was like a full go after that.”

2. TAKE NOTE: Not practising on Tuesday were RB Andrew Harris and RT Jermarcus Hardrick. Brady Oliveira and Johnny Augustine shared a lot of the reps in place of Harris while the Bombers continued with Pat Neufeld playing right tackle and Tui Eli at right guard with the absence of Hardrick.

3. NOSE TO THE GRINDSTONE: The Bombers, specifically head coach Mike O’Shea, is going to be inundated with questions over the next few weeks about how he will handle his personnel what with the club having already locked up first place in the West Division.
Not surprisingly, O’Shea wasn’t revealing much on that front.
“The daily process is not going to change,” he said. “That’s one thing I can I can promise you is we’ll stick to the same routine. Every single day the same practice schedules, the same meeting schedules… that that won’t change. We’ll come up with a plan as we go forward. We’ve already had a lot of discussions about how we want to proceed but as you know, with in terms of me sharing them with you that that’s not going to happen.”

4. ROSTER SHUFFLE: The Bombers made some roster moves on Monday, releasing LB Jontrell Rocquemore, DE Nick Dheilly, WR James Tyrell, K Gabriel Ferraro, DB David Rivers and OL Jalen Burks from the practice roster. Rocquemore, who dressed for seven games and started the season opener, became expendable with the return to health of Kevin Brown, who is a hellacious special-teams player.
“It wasn’t just Jontrell, we unfortunately had to let go of six players because we added three (Rose, Castillo and Shaq Cooper),” said O’Shea. “There’s a there’s a limited number of spots you have on your rosters and we’re not the type of team that just is going to carry injured guys week to week that aren’t injured… We’ve got 18 guys that aren’t dressing for games that are practicing and 24 was just a number that was ballooning.”

5. QB NEWS FROM THE OTHER SIDE: News out of Montreal this morning has the Alouettes announcing that the recently-acquired Trevor Harris will start at QB this weekend against the Bombers. Montreal is without starter Vernon Adams, Jr. due to injury and his replacement, Matthew Shiltz, did not finish the last game due to injury and was replaced by Harris.

Trevor Harris will start at QB for #alsMTL at Winnipeg. Matt Shiltz is inactive with a knee injury