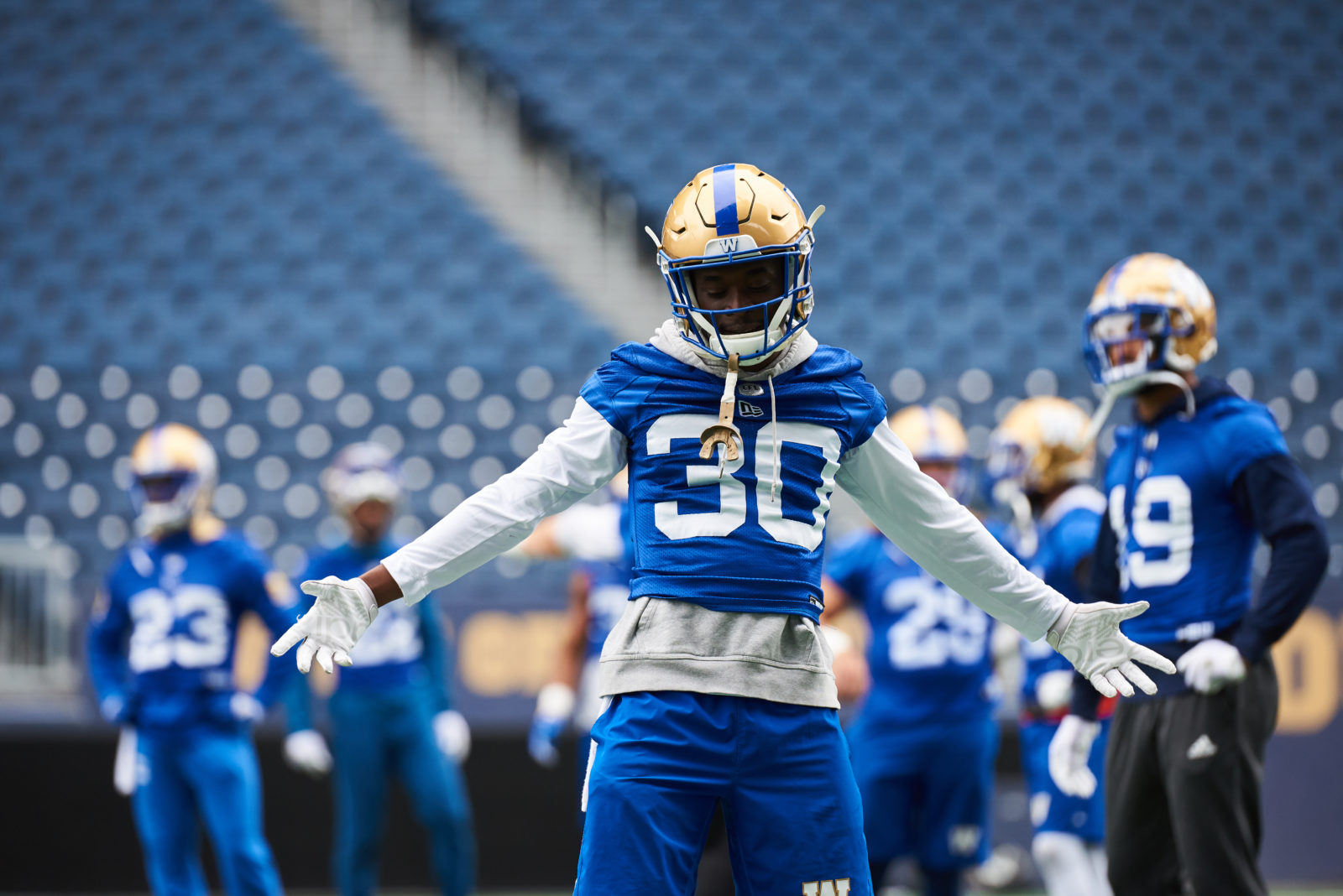 Quick Hits from Wednesday: Day 2 of the Blue Bombers practice week — and a session closed to the media — leading up to Saturday’s home date with the B.C. Lions…

1. THE BUZZING BLUE BOMBER TRANSACTION WIRE: The Bombers were again busy bolstering their lineup for the second straight day on Wednesday, adding CFL All-Star cornerback Winston Rose, who returns from a stint with the Cincinnati Bengals and running back Shaq Cooper, ex of the B.C. Lions.
The news comes one day after the club also added 2019 CFL All-Star kicker Sergio Castillo on Tuesday.

The club has agreed to terms with former @CFL all-star defensive back @ROSE25x4.

Adding Rose to an already stellar defence certainly enters ‘nice-problem-to-have’ territory. Cooper, meanwhile, provides backfield depth with the uncertain status of Andrew Harris after the Bombers star running back was injured in last week’s win over Edmonton.
Brady Oliveira came off the bench to rush for over 100 yards in relief of Harris and is eighth in the CFL in rushing, while Canadian veteran Johnny Augustine is also on the roster. Cooper had 142 yards rushing and a TD and 11 receptions for 69 yards in five games with B.C. this year.

2. BIG ON BAILEY: Bombers offensive coordinator Buck Pierce met with the media via Zoom on Wednesday and was asked about Rasheed Bailey, who scored the critical fourth-quarter TD that helped knock off Edmonton last week and now has 470 yards on 40 catches and four touchdowns this year.
“He’s worked extremely hard. Obviously he has a lot of the physical tools that we like within our offence, but he (brings) a lot of what Nic Demski does: he does multiple things,” said Pierce. “He helps in the run game, he helps in pass protection. He’s able to physically do the things we like our receivers to him. Give credit to him. He brings energy every single day. He shows up with a purpose to work and improve and make himself better and his teammates better.
“What you’ve witnessed over the last few months is just the evolution of a guy who is starting to understand the game a little bit more on the IQ side of it — understanding coverages, understanding how to run certain routes versus certain looks. It’s been fun to watch.”

3. OUCH UPDATE: As mentioned above, the Bombers practice was closed to the media on Wednesday. Here’s today’s injury report, FYI.

4. STRAIGHT GOODS: Bombers special-teams coordinator Paul Boudreau is a straight shooter. He was asked today to assess the work of the club’s special teams.
“We’ve covered really well,” he said. “We’ve lacked some explosives on the return game. Part of that is being nicked up on the back end and being young. But we’ve been at such a high level for a number of years that being a little average feels a lot worse than it is. We’re going to try in these last four weeks to see if we can get into gear on the return game and try to get a little bit more explosive. For the most part we haven’t given up a big one in the return game and we’ve been pretty physical in that aspect.
“We’re a younger group. I said to the guys a couple weeks ago, besides Jesse Briggs, Mike Miller, Shayne Gauthier and Johnny Augustine, pretty much the rest of the core group are guys who have one year under their belt or are rookies. So, we’ve got a lot of young guys who are seeing things for the first time.”