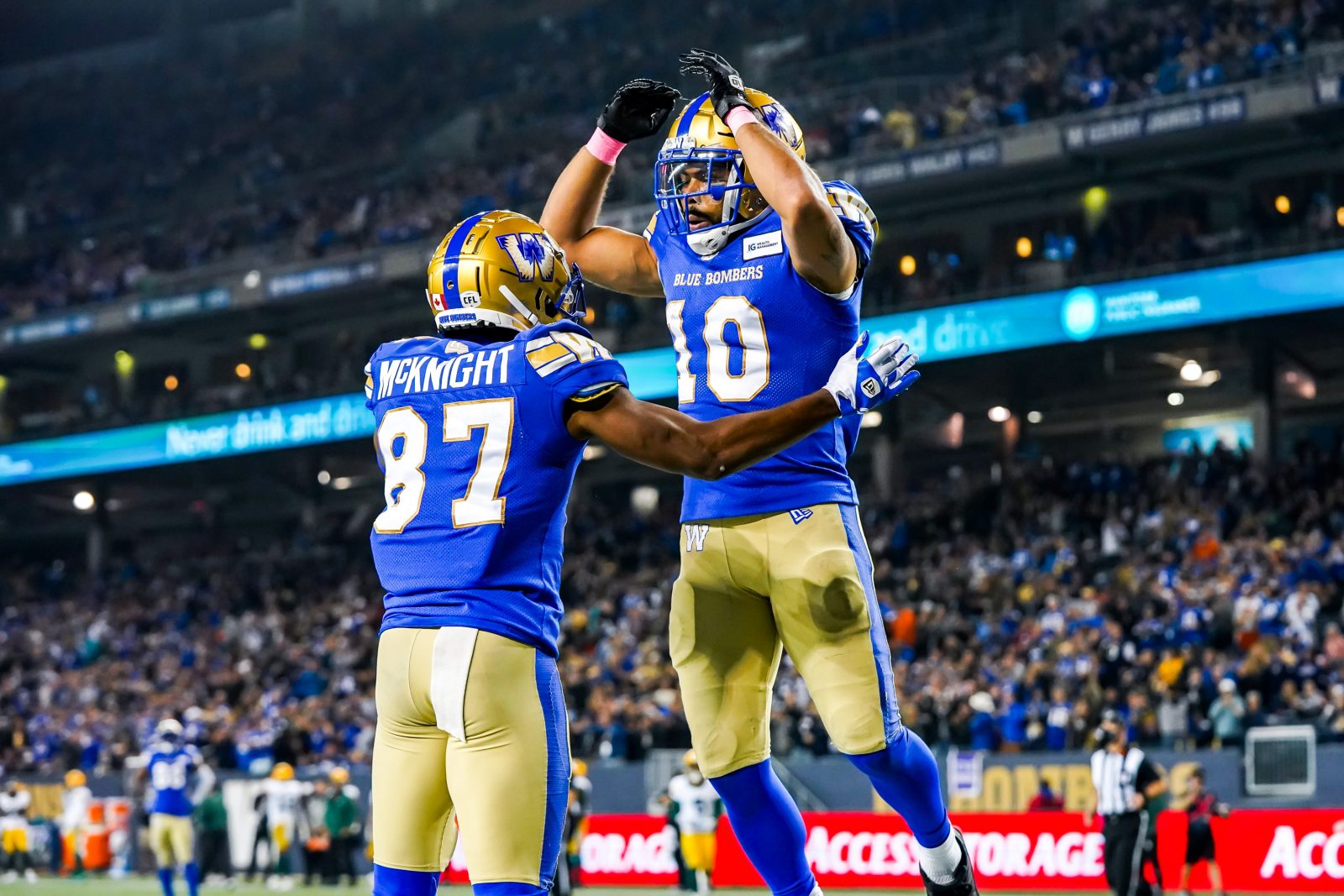 Let’s begin by calling what unfolded Friday night at IG Field a defensive masterpiece because, in that respect, what the Winnipeg Blue Bombers defence painted was certainly worthy of hanging in a gallery somewhere. The Bombers defenders were once again at their stifling, punishing, dominant best in a 30-3 victory over the Edmonton Elks in front of 27,388 on a perfect October night in south Winnipeg.

As a result of the club’s sixth straight victory, the Bombers improved to 8-1 — a record unmatched in these parts since the 1960 squad opened that campaign 10-0 — and bolstered their league atop the Canadian Football League’s West Division.

Yet, for all the love for the defence absolutely deserve the offence struggled to finish drives early in what was a lost opportunity to deliver a first-half knockout and the field goal concerns once again surfaced like a hand coming out of the grave in a horror movie. And so — as astonishing as it seems to even be typing this after such a lopsided game — even in victory the Bombers have set such a high standard for themselves this one will lead to some serious introspection over the next few days.

“Not good enough in the first half. I don’t know how to describe it other than it felt really ‘odd’,” said Bombers head coach Mike O’Shea to open his post-game media Zoom call. “Some of the plays we would normally make we just didn’t make. The defence played lights out the entire game and that’s what prevented those odd situations from really hurting us.” 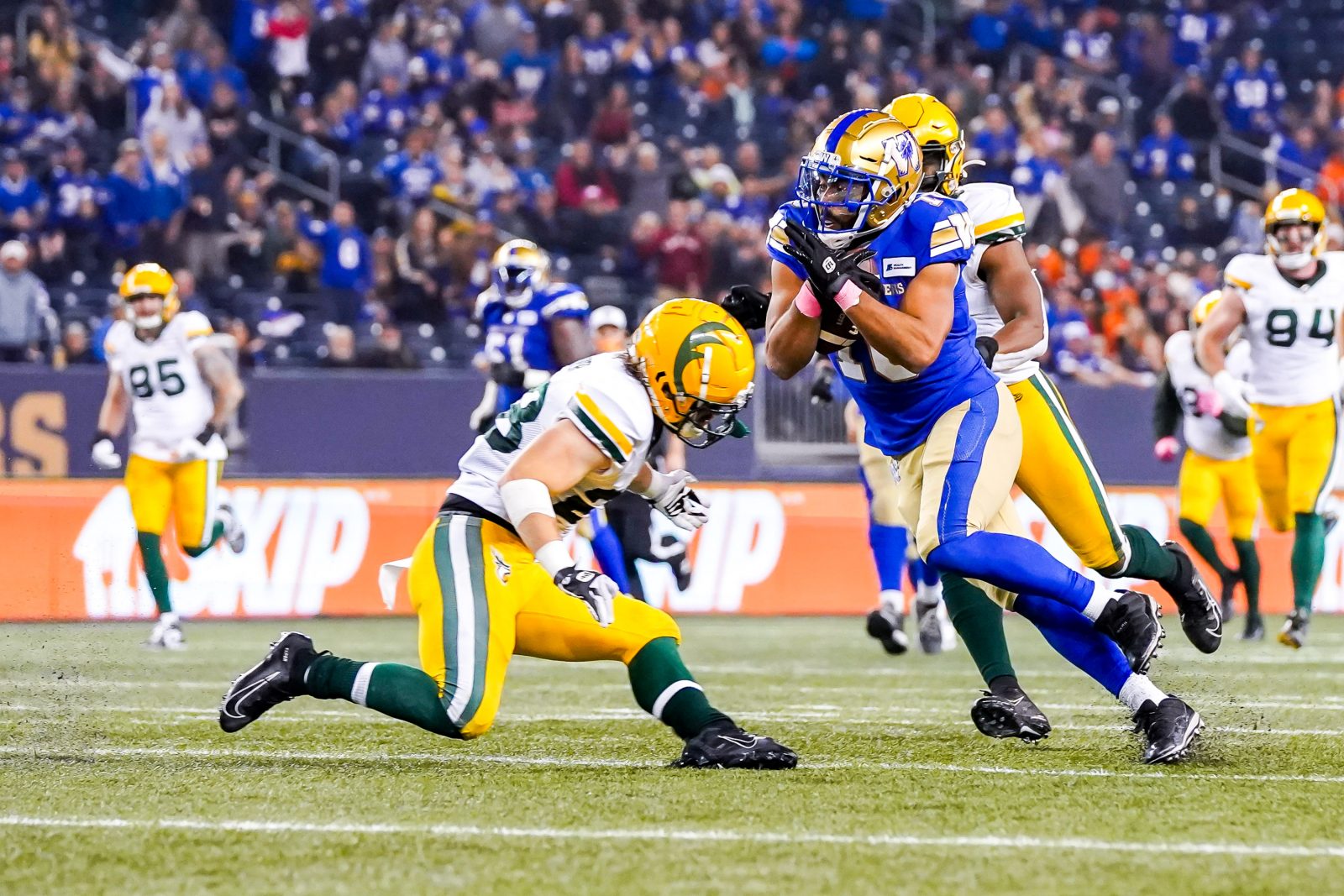 “But we certainly don’t want to have another first half like that. And then full marks for the second half. Defence played the entire game extremely well. Once again we’ll take the points and figure out the things we need to figure out.”

The Bombers limited the Elks to just 159 yards net offence – including just 134 through the air – registered three sacks, forced five turnovers and held their opponent to just 30 percent (seven of 23) on second-down conversion attempts. When it was suggested that we’re running out of adjectives to describe this defensive unit, O’Shea offered this:

“Running out of adjectives, but you look at these games and they just keep on going. They’re certainly not watching themselves play. They’re just getting out there and playing.”

The Bombers got a gritty 150 yards along the ground from Andrew Harris, who punctuated the victory with a pair of fourth-quarter TDs. But the offence also left points on the board when a drive stalled at the Elks’ one-yard line on the first possession and Zach Collaros had a pass attempt intended for Darvin Adams intercepted in the end zone.

Couple that with the continuing struggles the Bombers are having on placekicking – Ali Mourtada was just one of four with misses from 42, 47 and 46 yards and also missed a convert – and the story of the first half was as much about opportunities lost as it was about the dominant defence.

“It’s always important that all three phases are trying to be clicking,” said linebacker Adam Bighill. “But at the end of the day as a defence we’re not going to rely on offence or special teams to get the energy going to try to pick us up.

“We’re going to go do what we do no matter the situation, honestly. It’s really irrelevant what any other phase, is the best way to put it, because we’re going to go out and do our thing either way.”

Winnipeg’s kick coverage team was solid and, combined with some solid punting by Marc Liegghio and a blocked punt by Deatrick Nichols, had the Elks backed up in horrible field position for much of the game. That led to Edmonton conceding three safeties on the night. Worth noting: the victory improved the Bombers to 5-0 at home this season and means they have ow have won 16 of their last 17 at IG Field dating back to the fall of 2018.

“When we came in at halftime offensively we weren’t really pleased with how we were playing,” said Harris. “We definitely left some things out there. Obviously our defence has been lights out all year and the field was tilted, it seemed, because we always had good field position and were getting points on safeties.

“… I thought in the fourth (quarter) and midway through the third our O-line just put it together and started opening some big holes. We really wore that defence down. Our standard is very high. When we watch the film (Saturday) we’re going to see where we can better. At the end of the day we have to keep trying to execute to that higher standard and that standard of excellence and pushing for more and not getting too far ahead of ourselves as far as our record is concerned.

“We’re going to be our biggest critics and we’ve got to keep it that way and stay humble and keep grinding it out.” 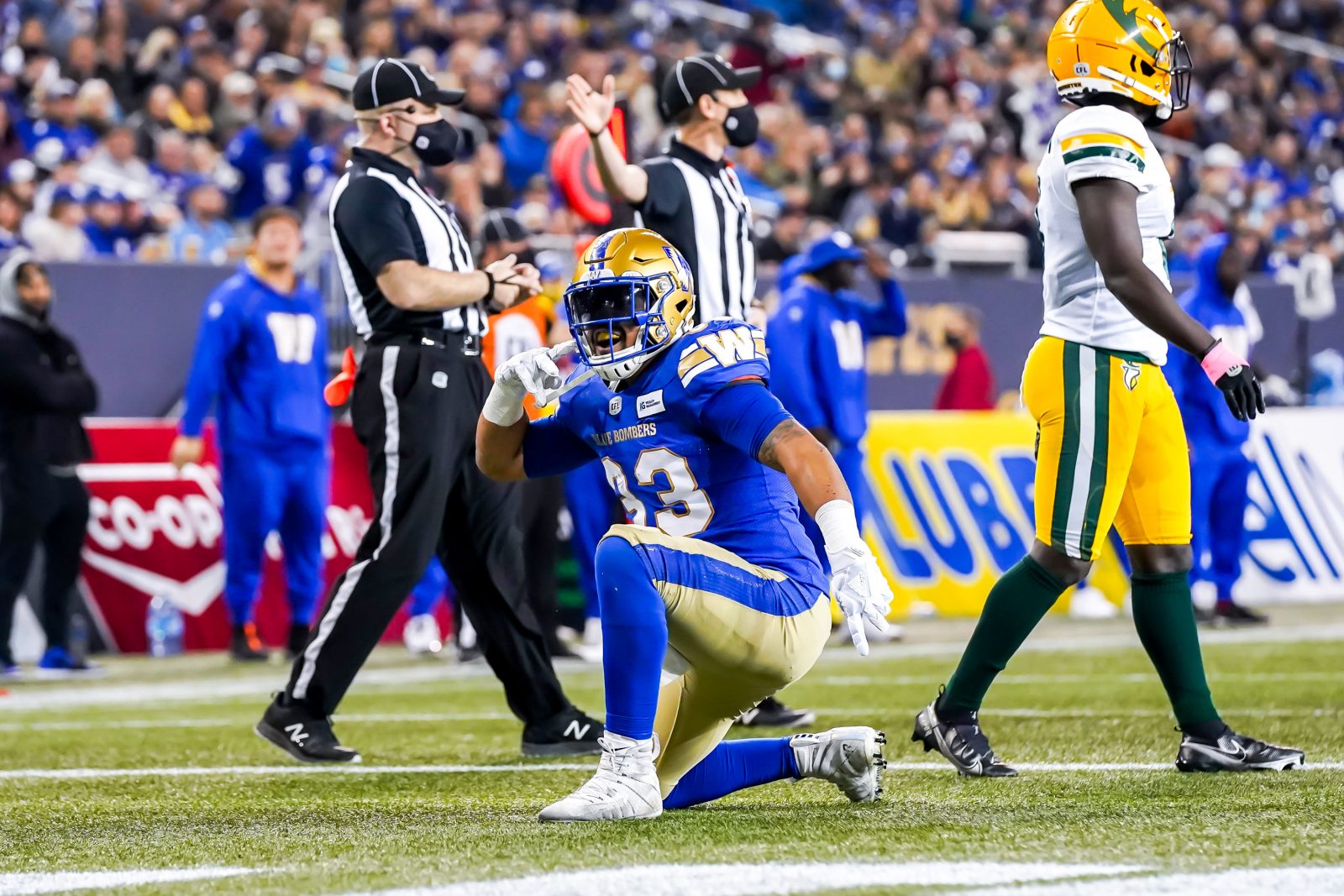 The Bombers opened the second half without RT Jermarcus Hardrick, who left the game with an undisclosed injury. That led to Paddy Neufeld moving into Hardrick’s spot on the right flank and Tui Eli coming in to play guard.

5: The Bombers forced five turnovers – a DeAundre Alford interception, a forced fumble and three on downs. The Bombers had two turnovers of their own, but finished +3 in the takeaway/giveaway deptarment to improve their turnover ratio this season to +17.
4-for-10: Ali Mourtada’s field-goal numbers this season. The Bombers are just 12-for-23 combined in field-goal attempts this season.
4-22: Kelvin McKnight, filling in for a suspended Kenny Lawler, finished the night with four catches for 22 yards.
15-of-34: Elks QBs Trevor Harris (9-of-22) and Taylor Cornelius (6-of-13) combined to complete just 15-of-34 pass attempts for just 134 yards passing.

Next: The Bombers return to Edmonton to face the Elks next Friday, October 15th at 8 p.m. CT.