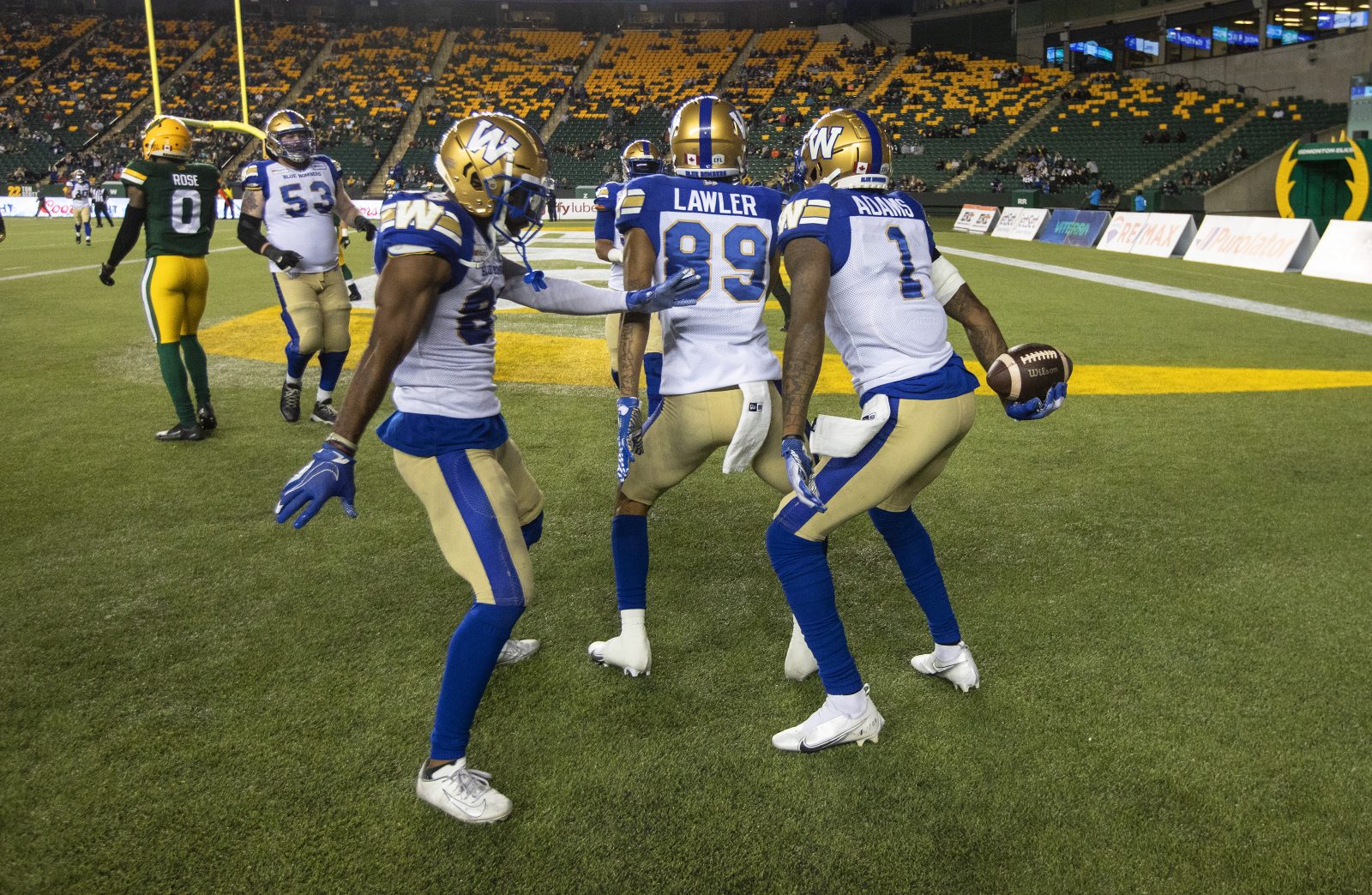 EDMONTON – It had all the elements of a prototypical ‘trap game.’ And while the Winnipeg Blue Bombers did dip their collective cleats into the trap momentarily, they did manage to yank their limb out before the apparatus snapped shut. Riding a three game win streak and facing a quarterback making his first CFL start in Taylor Cornelius — and also heading into their first bye week of the season — the Bombers overcame all those factors in scratching out a 37-22 win over the Elks that keeps them atop the West Division.

“We don’t ever really look at the (opposition) depth charts in too much detail,” said Bombers running back Andrew Harris. “You’ve got to look past it. You’ve just got to get out there and it doesn’t matter who you’re facing and not really think about it too much.

“Every time you step on the field you’ve got to do your job and win that one-on-one assignment collectively on offence, defence and special teams. We had that mantra of looking past what the depth chart says and who was playing and just worrying about ourselves and doing our jobs. When you start thinking about who’s on the depth chart and what’s going on, that’s when you get trapped and you get a little complacent. We’ve been doing a good job of not doing that.” 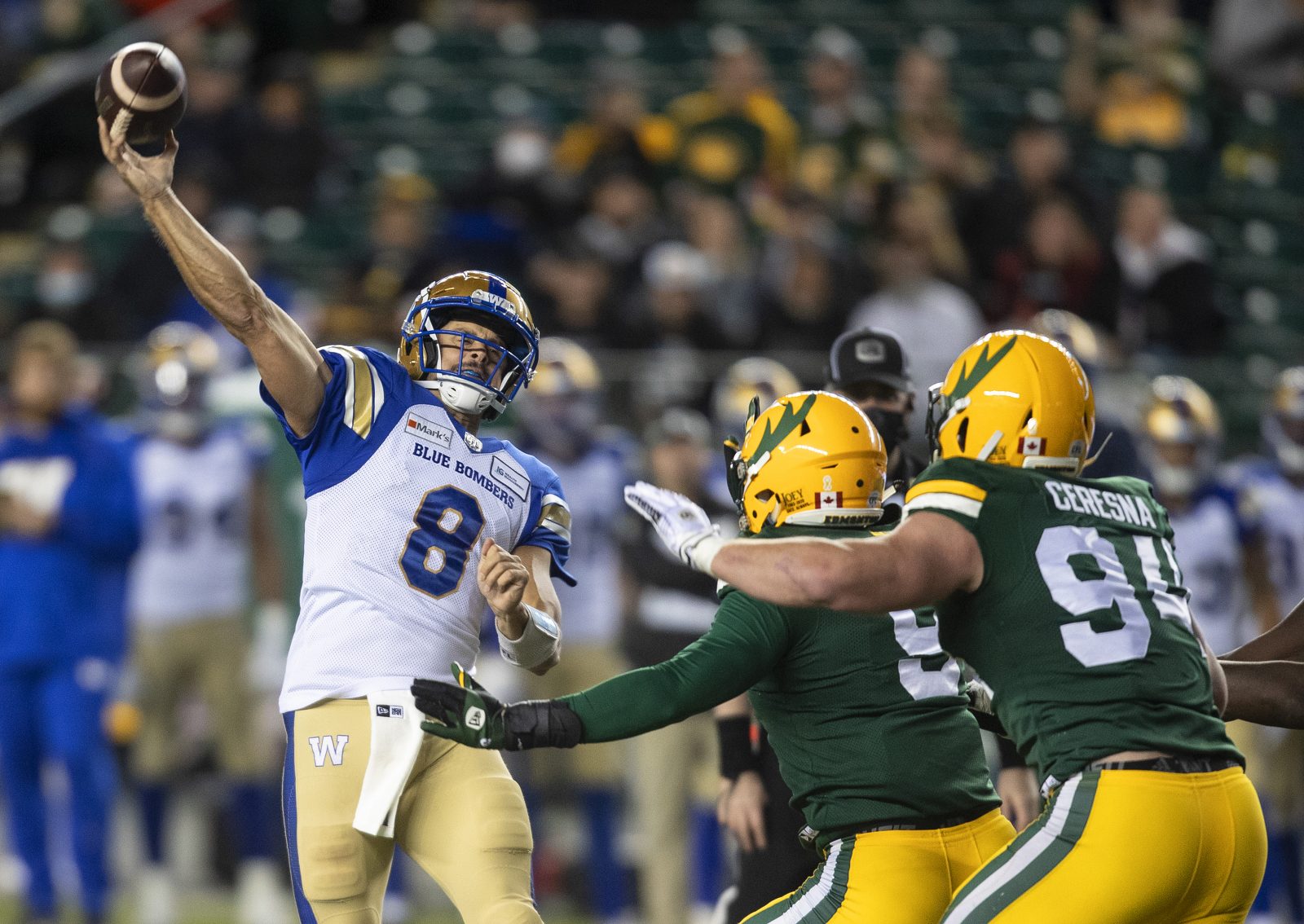 The Bombers got touchdowns on their first two possessions of the game as Zach Collaros connected with Darvin Adams for a 12-yard score, while Nic Demski scored on a sensational 21-yard TD run. But the Elks defence settled in after that and helped get Edmonton back in the game with an interception in their end zone and a forced fumble that led to a score.

The Bombers defence countered with two scores of their own in the second half that were the difference. Cornerback DeAundre Alford got things going in the third quarter, intercepting Cornelius and returning it for a Pick-6, his first career interception. The Bombers defence wasn’t done there, adding a second TD two possessions later as Adam Bighill scooped up a Cornelius fumble — forced by Jackson Jeffcoat, his league-leading fifth of the season — and returned it three yards to put the visitors up 30-19.

“I love these guys, man,” said Alford of the Bombers defensive unit. “We represent the Dark Side. We just want to go out and play physical, play for each other. I feel like this is the best defence in the CFL and we put everyone on notice that we’re going to come out and play fast and physical and just be a Blue Bomber, do whatever it takes to win. It starts with us on defence and I just love rocking out with those guys every night.”

The win wasn’t without its warts, as the club’s kicking woes continued. Ali Mourtada’s CFL debut Saturday night did not go well, as he missed all three of his field goal attempts — from 28, 51 and 44 yards, all of them wide right. He did connect on all three of his converts. But through seven games now the Bombers are just 8-of-16 in field-goal attempts as Marc Liegghio (5-of-8), Tyler Crapigna (3-of-5) and Mourtada (0-of-3). In 2019 Justin Medlock missed only six field goal attempts, going 37-43 and then followed that up by hitting 14-of-15 in the playoffs. Bombers head coach Mike O’Shea said he will stick with Mourtada when the club returns after the bye.

“We didn’t miss by much, I know we missed a couple. I did trot him out from some distance, too, and I will keep trotting him out at that distance,” said O’Shea.

“He’s got a good strong leg. He’ll refine it. Those kicks don’t miss by much… I know they miss, but I do think his process is pretty clean.”

In the end, the Bombers head into the bye knowing there are still things to fix in all three phases, but those corrections will now come as they continue live in the CFL’s penthouse.

“It’s always good to go to 1-0 and we’re excited to go on the bye week, obviously,” said Collaros, who finished 19 of 24 for 252 yards with the TD strike to Adams and one interception.  “There’s a lot of room for improvement. I think if you ask anybody in that room right now they would say the same thing.” 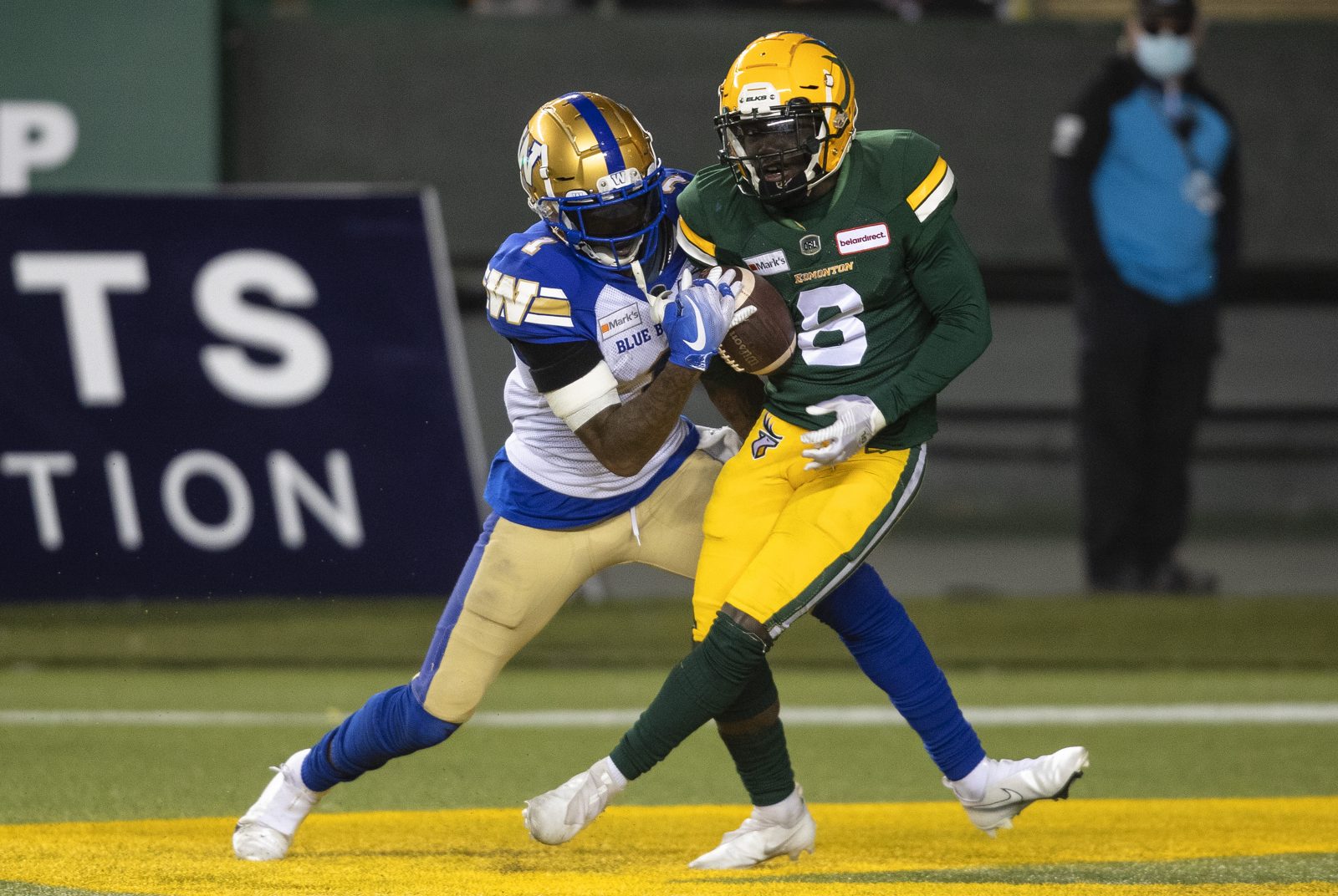 Turnovers by the Bombers on Saturday night – three interceptions and two fumbles. Two of those turnovers led directly to touchdowns: the Alford Pick-6 and the Bighill fumble recovery.

97: Rushing yards by Harris, giving him 353 in just four games this year and 9,391 in his career.
6: The Bombers also got another TD-sneak score by Sean McGuire, his sixth of the season.
3: Interceptions by the Bombers, as Elks QB Taylor Cornelius finished 19-of-33 for 243 yards with zero TDs and the three interceptions — two by Alford and one by Deatrick Nichols.
1+1: Bombers defensive end finished with a sack and a forced fumble. He now has six sacks and five forced fumbles.

NEXT: The Bombers head into their bye week now and return to action in Vancouver against the B.C. Lions on Friday, October 1st.