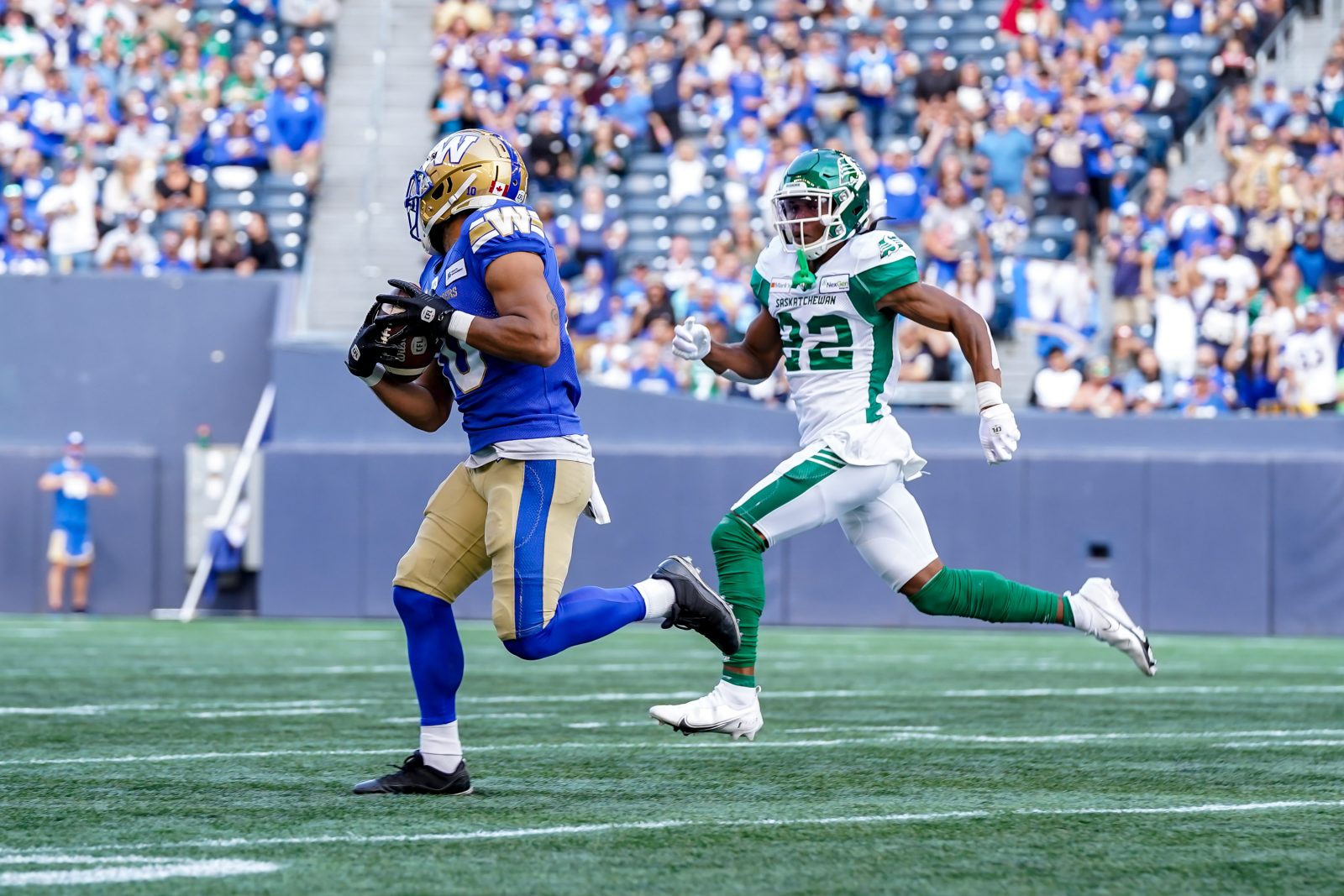 5 Quick Hits from Wednesday: Day 2 of the Blue Bombers practice week — and a closed-to-the-media session – leading up to Saturday’s meeting against the Elks in Edmonton:

1. WANTING MORE: Bombers slotback Nic Demski may be coming off a career-best game — five catches for 134 yards — but he also felt like he left out there in last weekend’s Banjo Bowl victory.
“I’m playing decent, but at the same time I’m not satisfied at all,” said Demski in a media Zoom session on Wednesday. “I believe I should have scored on both of those (explosion) plays (one covering 54 yards, the other 50) if not one of them. So, to me, it was a big game but I still have some blocking to improve and still believe I can still finish out those explosive plays as well. I’m just going to keep working and keep getting better.”
Asked to label himself as a player, he added:
“I’d put myself as a player that’s a team player that is going to come out there and do what he has to do to make plays. I’ll give myself the label as a ‘big-play’ type of guy, but I believe I have to be more consistent to be a star in this league. That’s why I come and work every day the way I do.”
Demski has appeared in four of the six Bombers games this year and has 21 receptions for 313 yards, second on the team in both categories to Kenny Lawler.

2. HIGH PRAISE: Bombers defensive back coach Jordan Younger has been working with a made-over secondary that had to deal with adding some new faces and also with injuries to start the season. The club lost veteran Mercy Maston to an Achilles injury in training camp, then saw his replacement, Josh Johnson, go down in Week 1.
The crew has also started, at various times, three different CFL rookies in the defensive backfield in Deatrick Nichols, DeAundre Alford and Josh Miller. Nichols and Alford have been the constants among the new faces, and are getting better with every snap.
“For first year guys, exceptional,” said Younger when asked to rate the progress of Alford and Nichols. “The way they’ve picked up the game, they’ve been on an accelerated learning curve. I’ve worked with them a lot one-on-one in meetings, they come in and they always want to learn and then they do a lot with the group, with Brandon Alexander, Nick Taylor, Alden Darby… we’ve got a nice group of vets to guide them and point them in the right direction. They can get better, but I’m very happy with where they are and how fast they’ve progressed.”

3. HIGH PRAISE II: One more from Younger, on the role of veteran safety Brandon Alexander, who is not only playing at an all-star level, but is an all-star leader and teammate.
“Brandon Alexander is one of the more special defensive backs I’ve been around, one of the more special football players I’ve been around,” said Younger. “Overachiever in his own right, and then he’s taken that role and not let up one bit. He’s a guy who’ll get here at 530 in the morning, he’ll stay until five in the evening. He’ll set up the meetings for the guys for the morning meetings when they get together and meet on their own. He gets the food for the group… he does a lot to make the environment friendly and inviting and also a work-centred environment.
“That kind of leadership is priceless and truly, truly an extension of the coaching staff in the sense that I can relay information with him and then have him go over it with the group, which has been vital to our success.”

4. FYI: This nugget comes courtesy the CFL stats crew: in the Banjo Bowl the Bombers became the first team this year to score a touchdown on the same drive after allowing a sack. After Zach Collaros was sacked by Micah Teitz of the Roughriders, the Bombers converted the second and 15 with a 22-yard pass to Kenny Lawler and then completed the 10-play, 87-yard drive with a Sean McGuire TD.
McGuire, ICYMI, now leads the CFL with five touchdowns.

5. QB1: Bombers head coach Mike O’Shea was asked Wednesday if he’s seen anything in Collaros since his arrival here that he didn’t know he had in his repertoire before he got here.
“Nope,” said O’Shea with a grin.
And then he expanded with this:
“I was fortunate to be in Toronto when he showed up. And very quickly everybody recognized that he’s a guy that his teammates were attracted to, that he could run a huddle and be very dynamic on the field. And he was a winner.
“Then he goes and he has a lot of success when he gets to run his own team (in Hamilton) when he leaves Toronto and so when you’re coaching against him you see all the same traits. When we get an opportunity to get him here, he still has all those traits.
“I don’t think it’s surprising or shocking. I also don’t think you need to dig real deep, you get a sense of who he is really quickly: he’s a tough competitor who loves the game of football, loves the CFL, his teammates and just wants to win. And he’s going to do everything he can to do that in his process.”