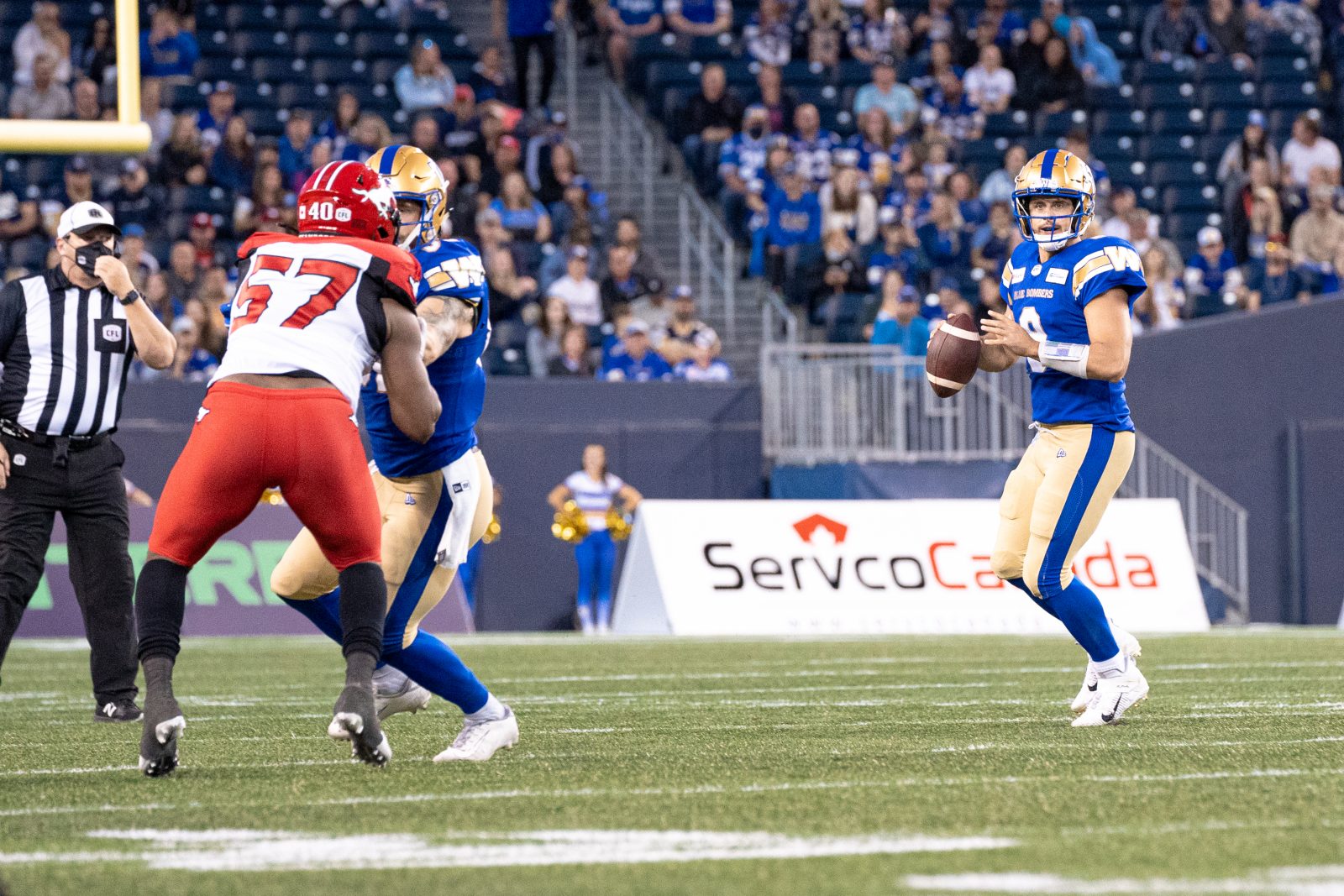 5 Quick Hits from Wednesday — Day 1 of the Blue Bombers practice week leading up to Sunday’s annual Labour Day Classic matchup with the Saskatchewan Roughriders in Regina:

1. GOOD RECEIVER/GOOD DUDE/GOOD FIT: In case you missed it, the Bombers announced Monday the addition of veteran receiver Naaman Roosevelt, who brings 67 games of CFL experience — and 301 catches for 4,134 yards — over a span from 2015-19 with the Saskatchewan Roughriders.
He’ll first be on the practice field for the Bombers on Friday and as to whether he could suit up for the Labour Day Classic, head coach Mike O’Shea said: “I do think he will learn everything we do very quickly and I know he’s available to practice this week, so we will see.”
Whether it’s this week, next week’s Banjo Bowl or beyond the Bombers are getting a player with a solid resumé as a player and even better reputation as a person.
“Naaman, for one, is a great person and any time you can add that in the locker room that goes a long way – not just for the receiver room, but for the culture of the organization,” said Bombers QB Zach Collaros, a former teammate when the two were with the Roughriders. “Naaman has that in spades and anybody who has ever been around him would say the same thing.
“I think as a veteran who has played in the league a long time he’s seen pretty much every concept that teams run… kinda like my situation when I was brought in. I’ve been around for a long time so I have a basic understanding of what teams like to do. Now it’s just learning the language of it. I don’t think he’ll have a problem picking that up.
“Again, I just think he’s a great cultural fit here. He’s a great person, a great teammate and we’ll benefit in having Naaman around.”
Collaros did speak with Roosevelt before the announcement was made official.
“I said, ‘Hey man, you’ll love it here. Mike O’Shea is a great head coach, it’s a great locker room, we’ve got a great staff. Everybody loves the game and it’s what you want to be around,’” said Collaros. “I gave him that kind of insight and said, ‘Whatever you end up deciding to do, good for you, but obviously we’d love to have you here.’ We’re all very excited about him.”

2. DEPTH BOOST: The Bombers depth is thin behind their starting crew, with both Janarion Grant and Nic Demski injured, and adding a known commodity in Roosevelt could be massive for the attack.
“We’ve been nicked up a little bit, so rather than bring in a guy with no CFL experience you’re bringing in a guy who’s got over 4,000 yards and is a very accomplished receiver who understands CFL defences, offensive route combinations, size of the field, the waggle,” said O’Shea. “All of the things, the nuances, a new-to-the-CFL guy has to learn he’s already mastered. He will be available more quickly than other guys.”

On the positive side, DE Nick Dheilly and WR Brendan O’Leary-Orange have both returned to practice.

4. FIRST 100: Rasheed Bailey registered the first 100-yard receiving game of his career, finishing with four receptions for 108 yards — and including two clutch second-down conversions on the last drive which led to the game-winning field goal.
“I think people are starting to notice,” said Bailey. “I think God is doing some amazing things in my life. I’m just going out there and having fun. I feel like last week I finally let my guard down a little bit more… not even 100 percent and putting it out there for my team. It was a good showing. I wish I had gotten into the end zone. But, shoot, that’s what makes you better. You put the film on and you see it.”
A passionate and emotional player, Bailey spoke about his comfort level now with the Bombers compared to when he made his first start, back in the Banjo Bowl of 2019.
“Everything (back then) was ‘Oh, it’s good, it’s good to be out there’… now that’s over. Cut all the emotional stuff out, get back to the basics. Have fun. For me, I was pressing. I was pressing, I was pressing, I was pressing. Playing with a lot of emotions that was going on with my family last week (vs. Toronto) and the stuff going on back home… for the first time I was able to come down and loosen up and talk a little bit more to my teammates a little bit more.
“I feel a difference. I feel like I’m stepping into what God has put me into. The more I realize that, the less pressure I put on myself. I’m not just out there playing for myself, I’m out there playing for other people. I’m out there playing for my family, I’m out there playing for my teammates… it’s bigger than you, so stop making it about you. My shoulders are coming down and I’m playing a little bit more looser.”

5. QUOTABLE: The Bombers have been asked a lot over the past couple of weeks to speak about the situation with the Edmonton Elks, who had a game last Thursday postponed because of a number of positive COVID-19 tests in their locker room.
The lastest development came Tuesday, when Canadian OL Jacob Ruby was released for violating COVID-19 protocol by misrepresenting his vaccination status to the team.
“For us, within our locker room that’s all I can really talk about and worry about,” said Andrew Harris. “We try to get all the players to follow protocol and do the right thing. At the end of the day you’re not only putting yourself at risk, but (you’re) putting families and jobs at risk here. I think all players and coaches and staff should take I very seriously and follow the rules because we want to keep this season going until the end.”