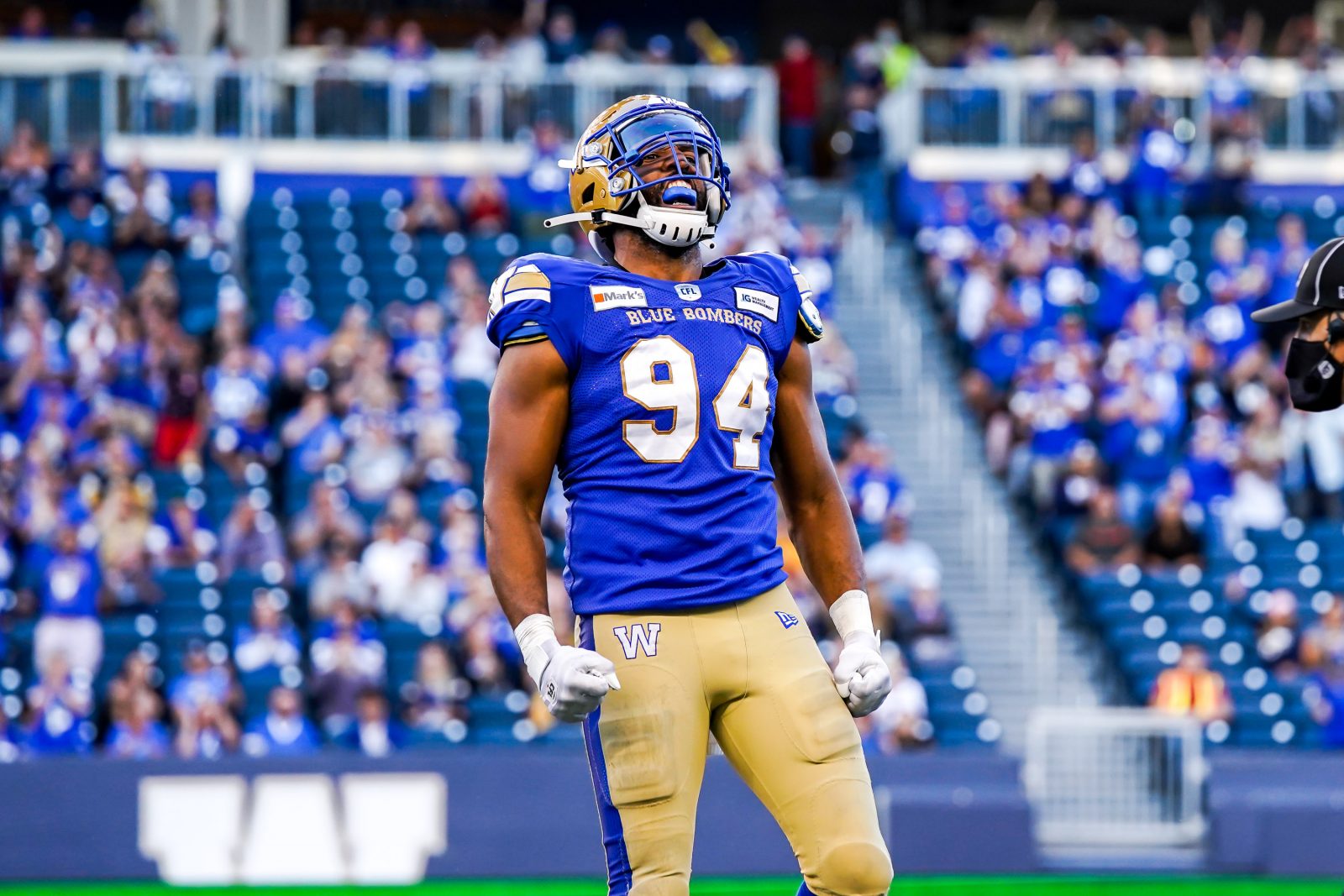 It certainly wasn’t without its warts and its flaws. Still, they can’t all be masterpieces, and the Winnipeg Blue Bombers are a perfect 2-0 after an imperfect 20-7 victory over the Toronto Argonauts Friday night at IG Field that was more a grimy defensive slugfest than offensive fireworks display.

The win, coming in front of 22,147 on a pristine night in south Winnipeg, was the Bombers sixth straight dating back to late 2019 and the Grey Cup playoff run. As well, the club is now on a 13-1 run at IG Field dating back to the end of 2018. The vastly improved Argos, meanwhile, fall to 1-1. These two clubs will meet again next Saturday at BMO Field in Toronto.

“I thought our guys came up, once again, with some great takeaways in a timely fashion to allow us to win the game,” said Bombers head coach Mike O’Shea afterward.

“Overall there were a few things we did… I thought we were fairly clean penalty-wise (six for 65 yards) and I’m pretty sure we won the turnover battle (4:2). Other than that, I’m sure there’s not a lot of us that are very happy. We’re happy with the win and the two points. And then from there we’ll make sure we’re diligent in how we look at the film and how we move forward from that.”

That last statement is telling, both given the dominance of the defence in the win and in the standard this club has set for itself. It also says a ton about the collective mindset of a franchise that has quickly put the 2019 championship in the rearview mirror and is back fixating on the weekly process of piling up wins. 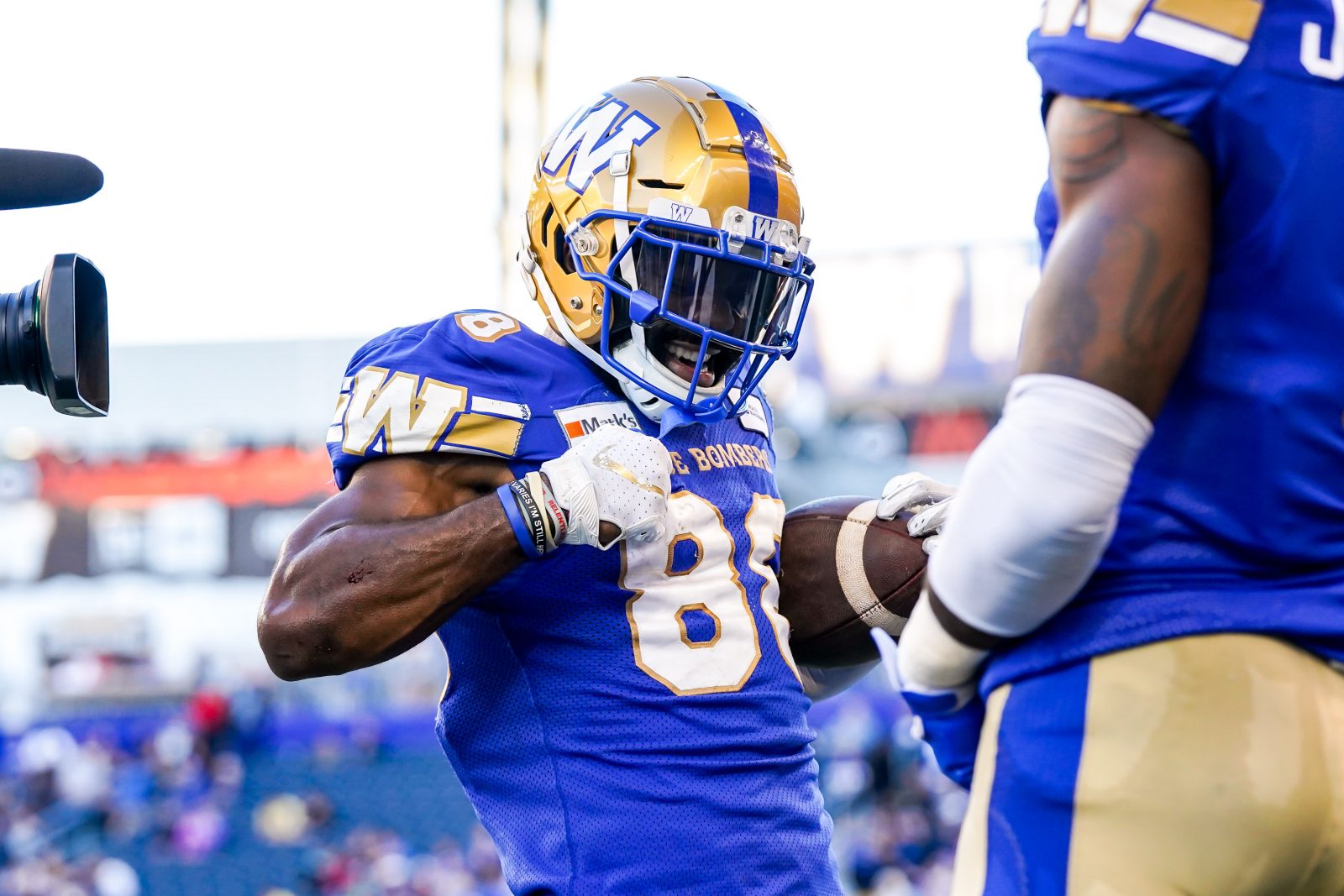 “… We talked about it after the game – a win is a win, but we felt like we left a lot of points out there. So, we’re going to have to watch with a critical eye and continue to get better, that’s for sure.”

All of this critical self-analysis shouldn’t steal away from another superb defensive effort. The Argos were limited to a third-quarter John White touchdown run – a score that ended a stretch of 23 possessions and over 99 minutes in which the Bombers did not surrender a single point. Get this: over the last five games dating back to ’19 the Bombers have surrendered just 52 points. That’s FIFTY-TWO.

“I could go on and on about those guys,” said Collaros of the defence. “Part of the frustration toward the end is we want to do it for our teammates. We want to help out the defence and special teams, which has been playing so well, and we want to do our part on offence. We scored enough to win the game, but we want to continue to get better and we’re going to.”

Leading 10-0 at halftime, the Bombers saw their lead shrink to 10-7 on the Whyte TD and with Nick Arbuckle replacing McLeod Bethel-Thompson at quarterback for the Argos. That’s when the defence stepped up – again – to seal the deal with two critical plays in the fourth quarter. First, Jesse Briggs forced a Whyte fumble that was recovered by Deatrick Nichols on the Argo 36-yard line. That was followed by a perfect Collaros-to-Demski score on the very next play that put a stranglehold on the game.

“We’ve got to capitalize,” said Demski. “We want to capitalize at the end of every drive and get some points on the board. So, when the defence gets a big turnover like that, we’ve got to go out there and do our job and finish the play.”

Nichols then followed that up with an interception with 4:30 left in the game that effectively sank the Boatmen.

“That’s the first thing I was big on,” said Nichols. “Your first game is going to be a little bit slow, but your second game has got to be 100 percent better. That’s all I was focussed on in this game. The most-important thing on the field is the ball, so if you’re close to the ball or running to the ball, good things are going to happen.” 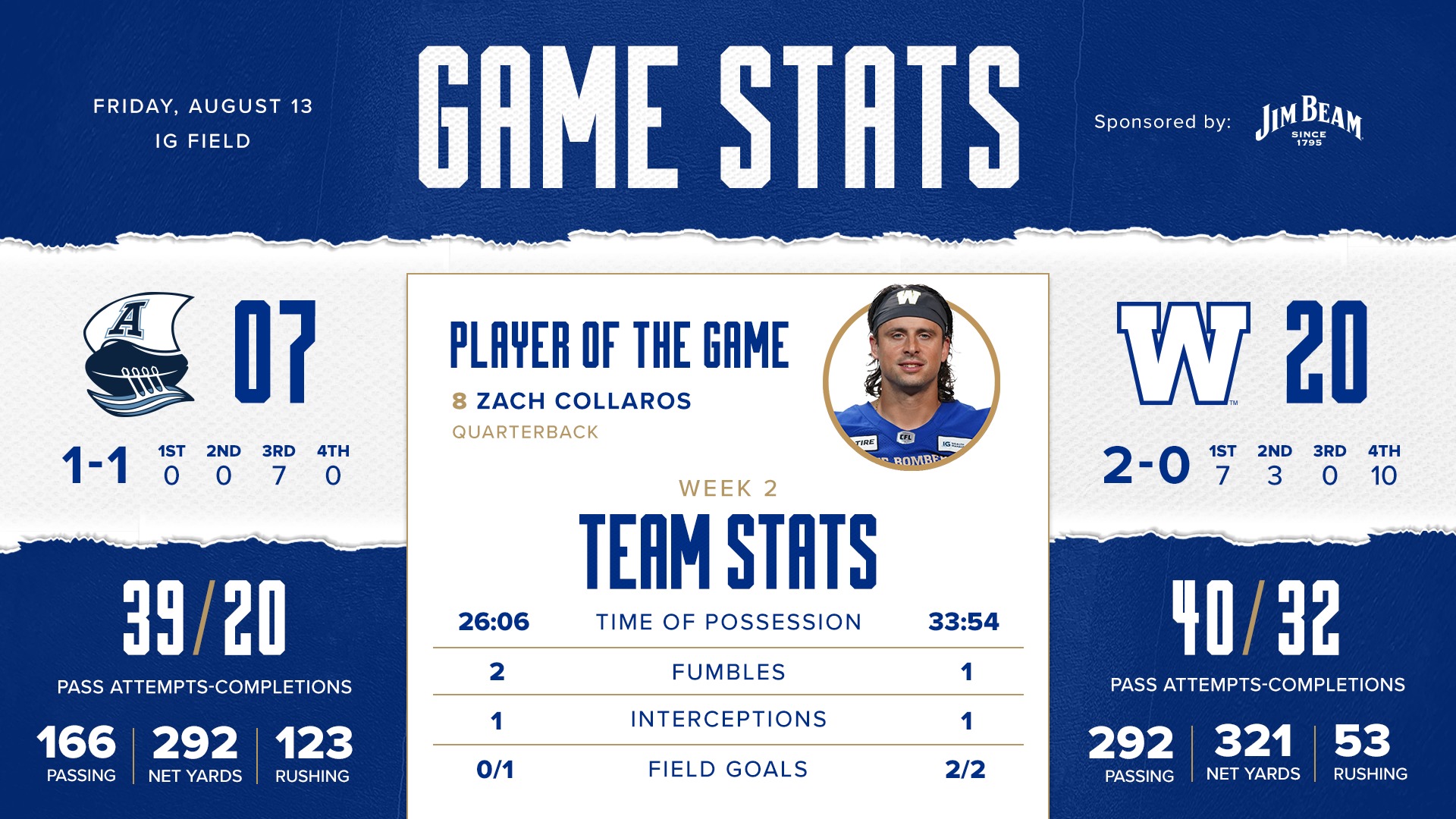 The Bombers won the turnover battle with a 4:2 takeaway/giveaway ratio. Winnipeg is now 22:3 in the turnover ratio through its five-game winning streak dating back to 2019.

The Bombers inactive player for the second straight week was OL Geoff Gray… The Argos were crushed in the penalty department, taking 15 for 112 yards. Winnipeg had six for 65 yards… The interception by Nichols was the first in his CFL career. He was leading the XFL in picks in 2020 before that league ceased operations because of the pandemic… Rasheed Bailey’s TD was his first as a Bomber.

2: Special-teams tackles by Mike Miller, leaving the Bombers FB three shy of passing former B.C. Lion Nick Arakgi for top spot on the CFL’s all-time list.
99: Kenny Lawler led all receivers with 10 catches for 99 yards.
29: The Argos did a solid job of limiting Brady Oliveira, holding the Bombers RB to 29 yards on 13 carries. Winnipeg managed only 53 yards on the ground and just 2.9 yards per carry.
292: The 292 yards passing was the highest total for Collaros in his six starts as a Bomber. He is now 6-0 in his starts since being traded to Winnipeg.

NEXT: The Bombers are on the road next Saturday in Toronto in a rematch with the Argonauts at BMO Field. Kickoff is scheduled for 3 p.m. CT.