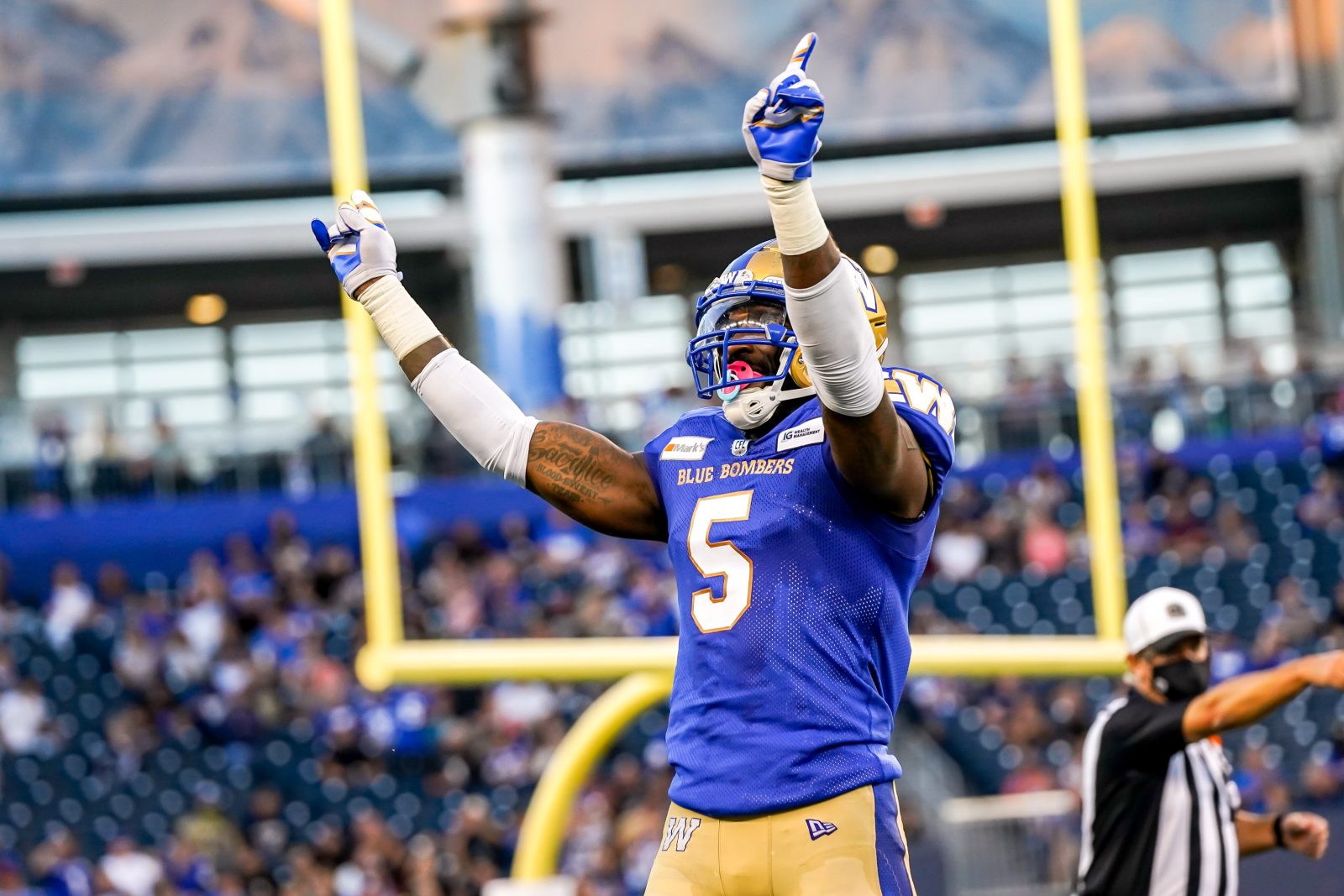 5 Quick Hits on Friday night’s win over the Toronto Argonauts:

1.  OPENING THOUGHTS: It wasn’t without its warts and its flaws.
That said, they can’t all be masterpieces and the Winnipeg Blue Bombers are a perfect 2-0 after an imperfect 20-7 victory over the Toronto Argonauts Friday night at IG Field that was more defensive slugfest than offensive fireworks display.
The win, coming in front of 22,147 on a pristine night in south Winnipeg, was the Bombers sixth straight dating back to late 2019 and the Grey Cup playoff run. As well, the club is now on a 13-1 run at IG Field dating back to the end of 2018.
The vastly-improved Argos, meanwhile, fall to 1-1. These two clubs will meet again next Saturday at BMO Field in Toronto.

2. TOE TO TOE: There were only 27 points put on the board in total, but the game was still over-flowing with spectacular plays, predominantly on defence.
The Bombers limited the Argos to just one touchdown — a 30-yard TD run by John White in the third quarter — and 291 yards net offence. The White TD ended a stretch dating back to last week’s opener in which the defence had gone 23 consecutive possessions covering over 99 minutes without giving up a single point.
Get this: over the last five games dating back to ’19 the Bombers have surrendered just 52 points. That’s FIFTY-TWO.

3. NOTABLE NUMBERS:
–The Argos did a solid job of shutting down the Bombers running game, limiting Winnipeg to just 53 yards along the ground. Brady Oliveira was held to 29 yards on 13 carries.
-Kenny Lawler led all receivers with 10 catches for 99 yards.
–Bombers FB Mike Miller had two special-teams tackles, moving him to within two of breaking the CFL’s all-time record of 190, held by Jason Arakgi, the long-time member of the B.C. Lions.

4. QB NUMBERS: Zach Collaros was solid, completing 32 of 40 for 292 yards and two TDs — one to Rasheed Bailey, the second to Nic Demski. The 292 yards passing represented his best as a Blue Bomber.
Not to be overlooked, he is now 6-0 as a starter in Winnipeg colours.
Toronto starter McLeod Bethel-Thompson was just 10 of 20 for 70 yards before being replaced in the second half by Nick Arbuckle. Arbuckle finished 10 of 19 for 96 yards, but threw a critical fourth-quarter interception to Deatrick Nichols that was a turning point in squashing a potential Argos rally and then fumbled late in the game.

5. FYI: The Bombers inactive player for the second straight week was OL Geoff Gray… The Argos were crushed in the penalty department, taking 15 for 112 yards. Winnipeg had six for 65 yards… The interception by Nichols was the first in his CFL career. He was leading the XFL in picks in 2020 before that league ceased operations because of the pandemic… Bailey’s TD was his first as a Bomber.