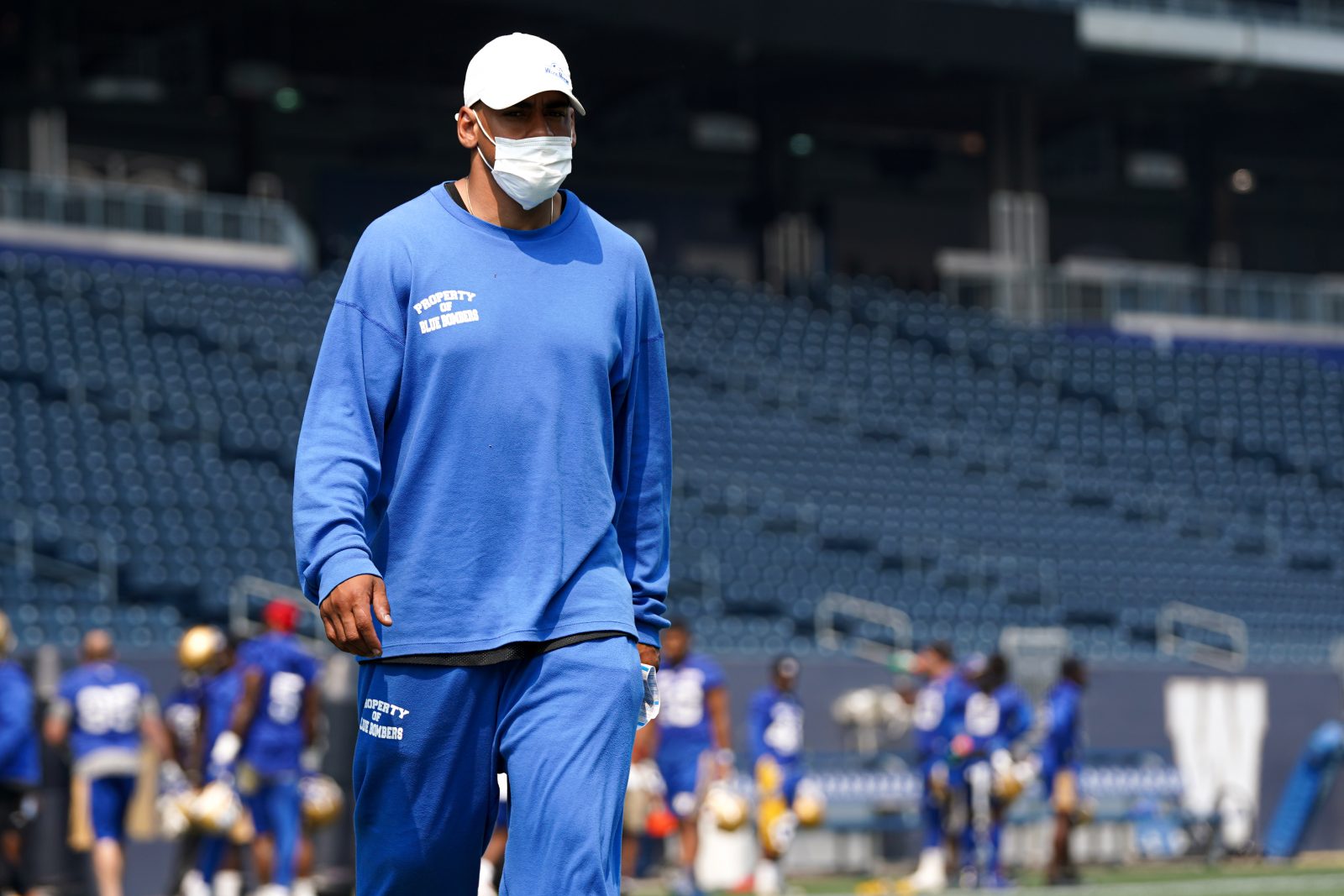 1. OUCH UPDATE: The Blue Bombers released their first injury report of 2021 Sunday afternoon as part of a CFL new policy. There are no new additions since the club’s final practice of training camp last Thursday.

As has been the case for much of training camp with Harris nursing his injury, Brady Oliveira took a lot of reps with the starting unit on Sunday, along with Johnny Augustine. Charles Nelson returned to practice and was working in the receiving corps along with Kenny Lawler, Nic Demski, Drew Wolitarsky and Rasheed Bailey.
Asked if anything should be read into that, Bombers head coach Mike O’Shea said: “You can read into it whatever you want, but we’ll wait and see come game time what the roster is.”
And when he was pressed about whether he would rule Harris out, he added: “No, I don’t ever do that. You know me, I don’t ever rules guys out. If they think there’s a chance then I give them that opportunity.”

2. GOOD TO GO: Oliveira hasn’t played in a game since the Bombers home opener back in June of 2019 — a game in which he suffered a broken ankle. He returned to practice with the club later that season, but was not dressed for the playoff push.
“Even just stepping onto the field, running through the tunnel and just having fans for the first game is super-exciting,” said Oliveira following practice on Sunday. “And having family members and friends being there and supporting me, I’m just super-excited at getting another shot at playing a game.
“It’s a great feeling for me being that I’m a Winnipeg guy and knowing that my mom is going to be there watching me and having all my friends there, it’s going to be an exciting time.”
Oliveira is a lean 225 pounds and describes himself as a north-south runner. He is also being respectful of Harris and won’t make any assumptions until the game-day roster is announced later in the week.
“If (he starts) happens, great, I’m definitely prepared for it,” he said. “It’s going to truly be a blessing. It being the home opener, having the (Grey Cup) banner being dropped, me being from Winnipeg is going to be a special moment. But I still don’t want to get too far ahead, I want to take it day by day. We had a great Day 1 today as a unit out there. I’ll come in tomorrow, attack Day 2 and just keep attacking day by day and if the opportunity is there on game day I’m going to make the most of it and I’m really going to soak it all in because it will be a special moment.”

3. FYI: The Bombers will have three changes in their secondary this year following the departures of Winston Rose (Cincinnati) and Marcus Sayles (B.C.) and with the Achilles injury suffered by Mercy Maston earlier in camp. Working in Maston’s spot on Sunday was veteran Josh Johnson while Deatrick Nichols and DeAundre Alford were working on one side of the secondary.
On Nichols and Alford and how they were able to crack the roster, O’Shea said: “They showed up at a camp where there were a couple of openings, which is obviously a positive for them and everybody we brought in. Then with Mercy going down we had another opening, so we’ve got a bunch of young guys that are here than can play.
“All of them, they’re all athletic. They all have a fair bit of quickness and ball skills. The one thing we’re missing is really figuring out whether they can tackle, whether they can finish, without the benefit of exhibition games. But you see enough in the drills and the footwork drills to say they can get the job done.”

4. FULL NELSON: During his days at the University of Oregon Charles Nelson did just about everything for the Ducks short of painting the lines on the playing field. He caught 124 passes over four years, returned kicks and even played some on defence. And so when he was asked what he could bring to the Bombers offence this year — he injured his knee in 2019 and played in just four games — Nelson grinned.
“Versatility,” he said. “Just getting the ball in my hands in space and being able to do what I’ve been doing for years now. That’s my game plan. That’s what I do.”
“He’s very athletic, he can play multiple positions,” said O’Shea of Nelson. “He’s played on both sides of the ball. He’s a returner. Besides that, he’s a very likeable guy, he’s engaged in the meeting rooms, he’s working hard in the training room when he was nicked up and went right to work to get healthy. I find him a really pleasant guy to talk to. I enjoy my conversations with Charles, whether we’re talking football or anything about life. He’s an interesting young man.”
Near the end of his media session Nelson was asked about his ‘hunger level’ for 2021.
“I’m starving,” he said. “I think all of us in here are starving. Not having a season, but preparing for a season last year was challenging and to not have one was definitely challenging. So just to be out here since training camp started is a blessing; it’s an opportunity we’re all not taking for granted because we know it can be gone in an instant.

5. QB OR NOT QB: The Hamilton Tiger-Cats have made a decision on their starting quarterback and veteran Jeremiah Masoli will get the nod over Dane Evans — who started the last meeting against the Bombers in the Grey Cup.

Here’s O’Shea when asked if the Ticats making their QB decision changes preparations from a Bombers perspective:
“I don’t know that it changes the prep, really. I’m sure, like they do, we focus a lot on ourselves in making sure we’re ready from our standpoint and making sure we know what we need to do, not necessarily on all those details with the opponent. We do watch film and we do have film on both quarterbacks. It was going to be one of them, so I’m sure the defence will be prepared for whichever one lines up and just because Jeremiah is starting, we might see Dane also depending on how they’re rolling. We’ll be prepared for both. I don’t know that it changes a lot in terms of how we plan. Their offence is still their offence.”