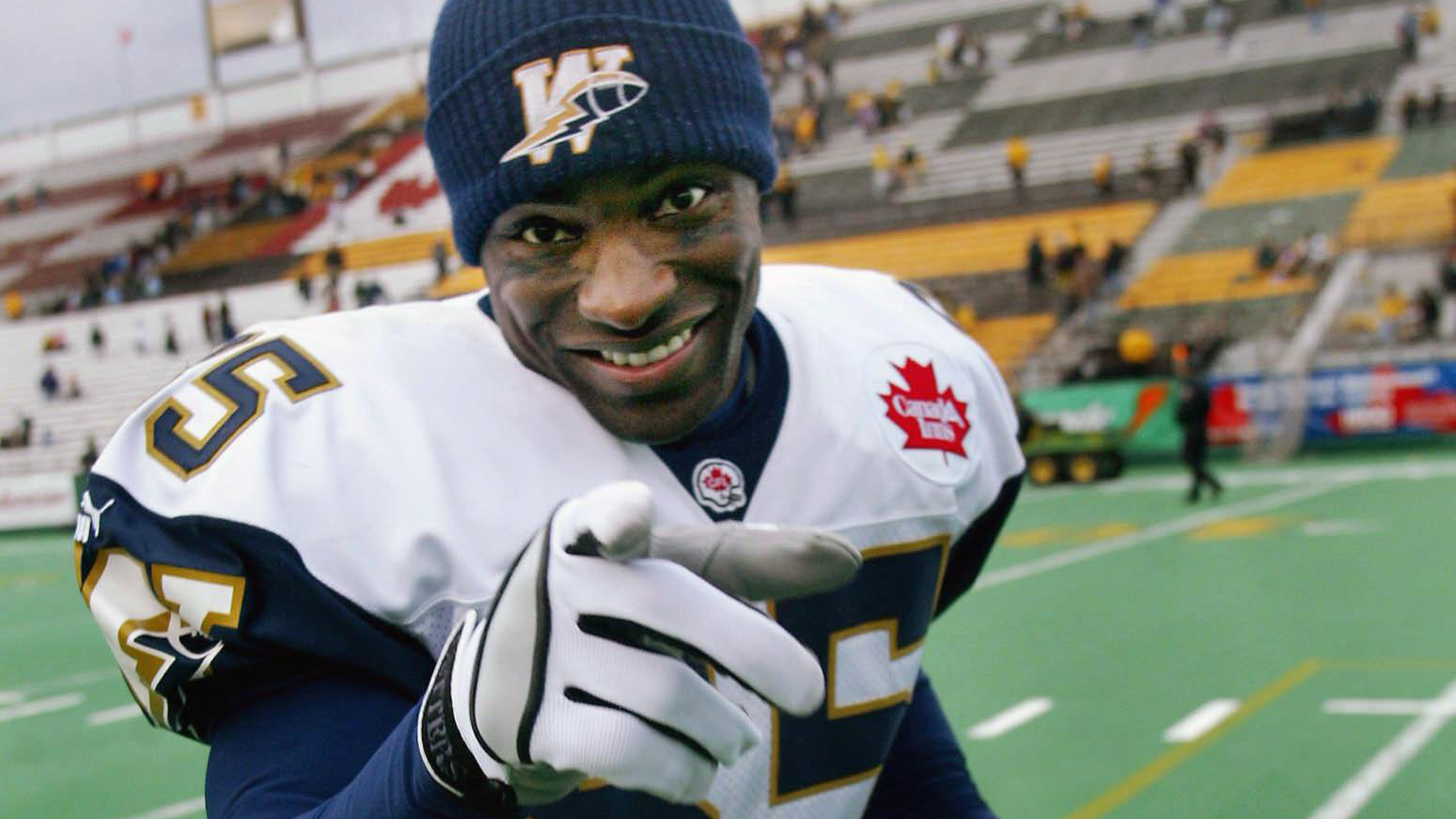 Winnipeg Blue Bombers slotback Milt Stegall jokes with photographers as he leaves the field after the Bombers defeated the Hamilton Tiger Cats 28-7 during CFL action in Hamilton Sunday Oct. 27, 2002. Stegall caught his 23rd touchdown to break the league record for most touchdowns in a season. (CP PHOTO/Kevin Frayer)

Maybe you’re like me – a loyal and long-time fan of the Canadian Football League – and you’ve had your fingers crossed for so long it’s like your middle and index fingers have become permanently entangled.

It dates back to last August for yours truly, back when so many in this league believed a bubble season would unfold at IG Field here in Winnipeg before the plug was pulled on the 2020 campaign. And my digits have been crossed in the days, weeks and months since, through all the rumours and speculation and dark and gloomy days this pandemic has regularly served up over the last 16 months or so.

So now it’s about Monday’s CFL Board of Governors meeting, at which time the league’s big thinkers are expected to vote on the proposed August 5th start to an abridged 2021 season.

Speculation continues to swirl into the weekend that not all nine teams are on board with this, but on Friday the CFL Players’ Association ratified adjustments to the current collective bargaining agreement – a massively important step leading into Monday’s vote.

Still, we’ve been teased before. And so rather than stew alone about all the uncertainty, I called Winnipeg Blue Bombers/CFL legend Milt Stegall at his home in Atlanta to get a sense on where he stood on the league’s current situation – knowing full well the man has a perpetual glass-is-half-full outlook on life.

“I worry sometimes and I know where your concerns come from,” began the CFL’s all-time touchdown leader. “For me, I try not to let those concerns and worries seep too much into my thinking – easier said than done sometimes, of course.

“I’m an optimistic person and I try and focus on the positive things we’re hearing – that they’ll play a shortened season starting in early August. That’s what I concentrate on and, yes, it’s difficult at times because you hear so many outside sources saying that might not be the case and that a couple of teams might not want to play.

“And then I see little things like teams signing players and I think, ‘Ok, wow… if they don’t want to play why is everybody signing players?’ I just try to stay positive and keep saying to myself, ‘We’re going to play.’”

Granted, I had that same optimism last summer. Stegall, it turns out, wasn’t so sure the bubble idea was going to work.

“It’s different for me now than last year,” he said. “When we heard last summer that they needed a bunch of money from the government to play in the bubble, I was like, ‘Whoa… that’s a difficult task. If that’s what we’re relying on to get back on the field again I think it’s 50-50 we’ll play.’

It’s not a ‘Stegall guarantee’ – remember his legendary six guarantees in life are ‘death, taxes, trouble, Milt being on time, Milt being pretty and Milt being in great shape’ – but, given what we’ve all been through over the last year, we’ll take 90-95 per cent all dang day.

More from Milt and other notes, quotes, and links in this week’s edition of 1st & 10…

1. Stegall carved out a sensational 14-year career with the Bombers with most of those seasons featuring some sort of all-star recognition and record-breaking performances. He also worked as hard, if not harder, than any other player every offseason to prepare for the grind of the regular schedule.

And so it was during our conversation that we talked about how nightmarish this whole thing has been on the players – not just financially, but in having a year taken from their career by something that is completely out of their control.

We mentioned rookies and draft picks who have yet to play, players heading into their second year who are on the cusp on grasping all the nuances of the Canadian game. And we talked about a player like Andrew Harris, who is on the back nine of his career but had his climb up the CFL’s all-time charts paused by the pandemic.

“He’s a first ballot hall of famer. His legacy is already incredible,” Stegall said of Harris. “Now, people will say he got to rest a year, but I don’t care how much rest you get, when you get older and you’re not playing it’s difficult. You’ve been off playing. Hopefully a guy like Andrew can get back playing like he was before, but it was still a year robbed of him and the other players.

“There’s been so many unfortunate things, not just for guys like Andrew Harris who are at the tail end of their career. Hopefully that happens this year because he’s still got a chance to do some great things. It sure didn’t look like he was slowing down at the end of 2019, so I hope he can step back on the field and continue to play the way he was.

“But I also think of the Blue Bombers fans and that organization who have just been waiting to get back out there and defend their Grey Cup championship. They got to celebrate it, but they didn’t get to celebrate it like they could have with their fans and with that team walking on the field last year to show off their rings.”

2. All the details about an abridged ’21 season have yet to be released, but it seems all but a given there will be no preseason games. Stegall mentioned the impact that will have – not just on players trying to crack a roster in training camp, but on what the start of the season might look like.

“When you take an entire year of football away from these individuals – I don’t care if you’re in your 13th or 14th year or you’re going into your rookie year – it’s hard to step back out there and say, ‘OK, I’m ready to go,’” said Stegall. “I don’t care how much training you’ve been doing, you’ve been away from the sport for an entire year not only physically, but mentally. It’s not going to be easy to get back up to speed. And now we’re hearing there might not be any preseason games? Those first few regular-season games may be a little bit shaky. Regardless of what it looks like, I’m like everyone else who is just going to be so excited just to see some CFL football being played.

“Let’s hope when they have this vote on Monday everything goes as planned, we get a schedule and we get to playing in early August.”

3. One more from Stegall…

He had an interesting take on all the speculation about the CFL’s long-term future – a merger, finding other revenue streams, and finding a way to get back in the hearts and minds of fans.

“I don’t know a whole lot about what it might look like. The thing I will say is I would rather see a merger with another league than no CFL at all,” Stegall said. “I would hope that the CFL remains as it is because there’s nothing like three-down football. There’s nothing like giving young Canadians a chance to play in their league. I’m sure there are young Canadians who watched me play back in the day or other Canadians at the time and they said, ‘I want to play in the CFL.’ If you take that away that mindset isn’t the same.

“But, again, I would rather see the CFL exist in some capacity – even if that means a merger – than no league at all. I know that’s difficult for some people and there are some who would rather not see the CFL at all, but I’m not one of them. I just want to see the league continue. Let’s hope there are other revenue streams they can explore that would allow it to continue in the current path. I’m sure Randy Ambrosie is doing everything in his power to examine that.” 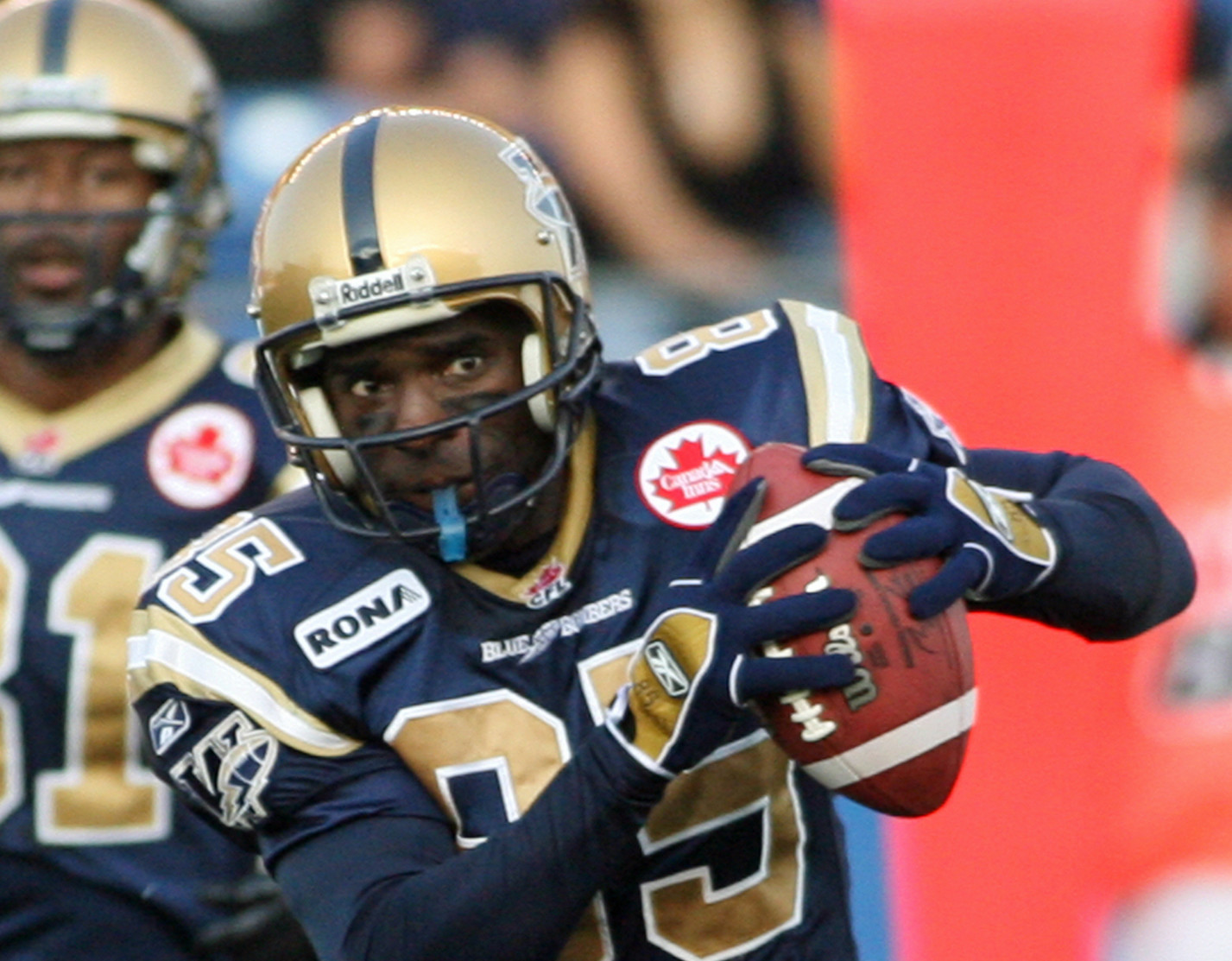 4. For those of you interested in the details of collective bargaining agreements, amendments and such, first of all, good on you because this stuff can make my eyes gloss over – even knowing full well how important it is.

But if you want to check it out, here’s the full CFLPA statement from last Thursday on their memorandum of agreement with the CFL on amendments to the current CBA:

And this poignant message from CFLPA President Solomon Elimimian:

5. Let’s keep the good vibes rolling with some other interesting reads…

First, from Bruce Garrioch of The Ottawa Sun, who visited with Ottawa Sports and Entertainment Group CEO Mark Goudie for this piece.

“We have to play football. I don’t think we can be out of the public consciousness for another season. It’s critical that we play football this year. That’s why we committed as an organization, to taking that risk of doing whatever it takes to play football.”

“If we have to commit to that without any certainty of fans, we wouldn’t be happy about it, but we would do that because we need to play football at TD Place this year.”

To that end, this piece from TSN’s Dave Naylor speaks of a committee representing seven Ontario-based pro teams – the Toronto Argonauts, Blue Jays, Maple Leafs, Raptors and Toronto FC, the RedBlacks and Hamilton Tiger-Cats – submitted a proposal asking for up to 35 per cent of stadium capacity for that province’s stage 2 opening, and 100 percent for stage 3. Stage 2 could come as early as July 2, stage 3 by July 23.
The link to that full story is here: 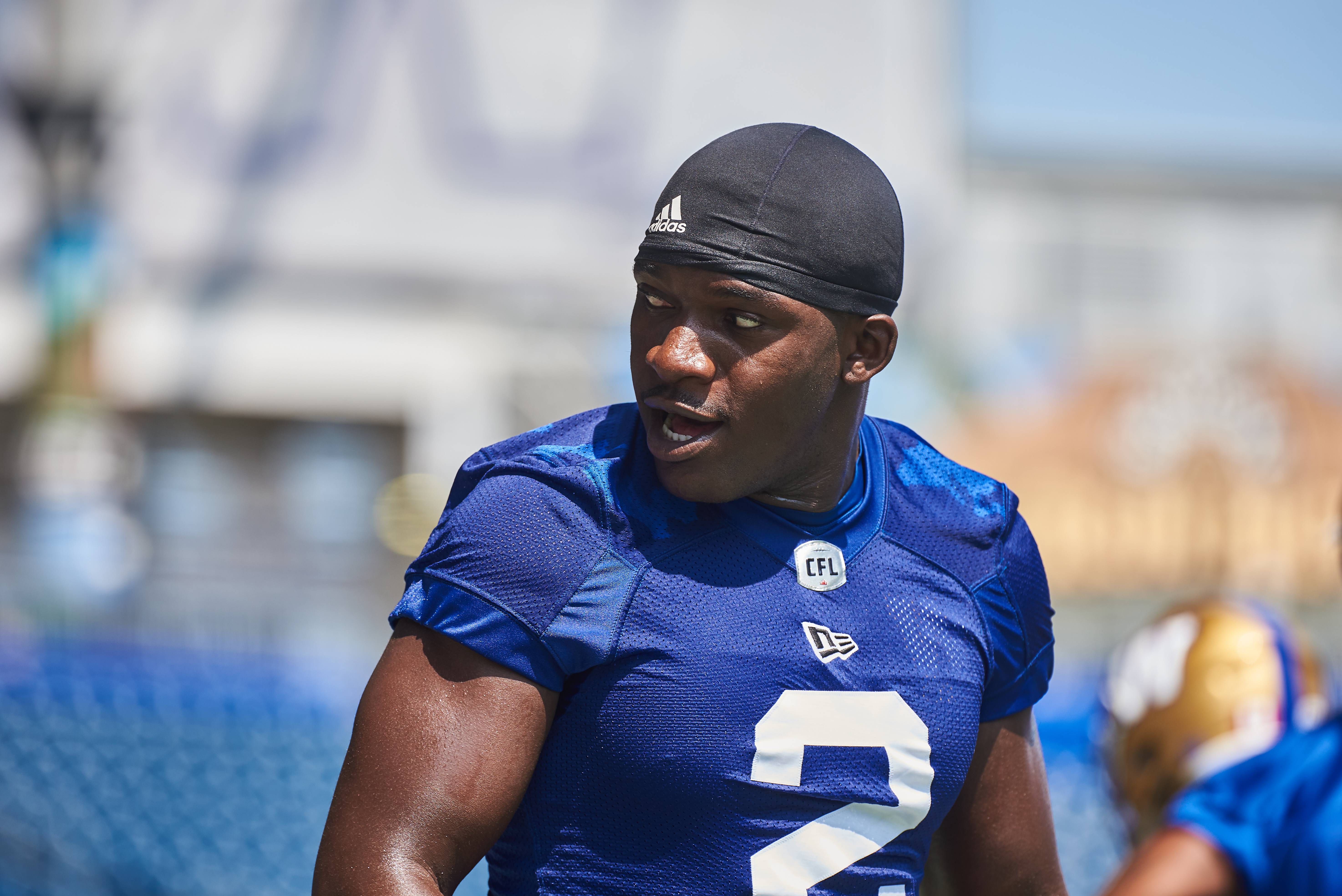 7. ICYMI… the Bombers re-signed Canadian D-lineman Jonathan Kongbo last week. He bolsters their homegrown and D-line depth and then there was this nugget he passed along in our conversation – Kongbo is now 268 pounds after packing on 16 pounds since the team’s Grey Cup run in ’19.

And if you remember the University of Tennessee product from his rookie season, the man was already carved out of stone. That story is here:

8. Some Bombers fans may remember Kris Robertson, a cornerback from Concordia who was the club’s second-round draft choice, 11th overall, in the 2013 CFL Draft.

Robertson was a testing star at the ’13 combine and the club hoped his speed would translate into the possibility of him starting at corner at the pro level. Unfortunately, a knee injury ended those hopes and he returned to school.

Robertson has just been hired by Simon Fraser University as the new strength and conditioning coach for all 17 varsity sports programs.

You can read all about Robertson’s latest move here:

9. A couple of notes as we work together to get as many Manitobans vaccinated. First, this piece from the CBC on the province’s announcement last week about providing immunization cards .

The story includes input from Bombers President and CEO Wade Miller, who spoke of the possibility of QR-coded vaccine cards being available on smart phones for entry to IG Field. The club is hoping to be playing in front of some fans, the percentage unknown, when the CFL season is tentatively scheduled to begin in August.

“You see in Alberta where their premier has come out and said we’re going to be full stadiums in August and some capacity in July,” Miller told the CBC’s Sean Kavanagh. “And the same thing in Saskatchewan. And we look for that opportunity in Manitoba when the time’s right.” 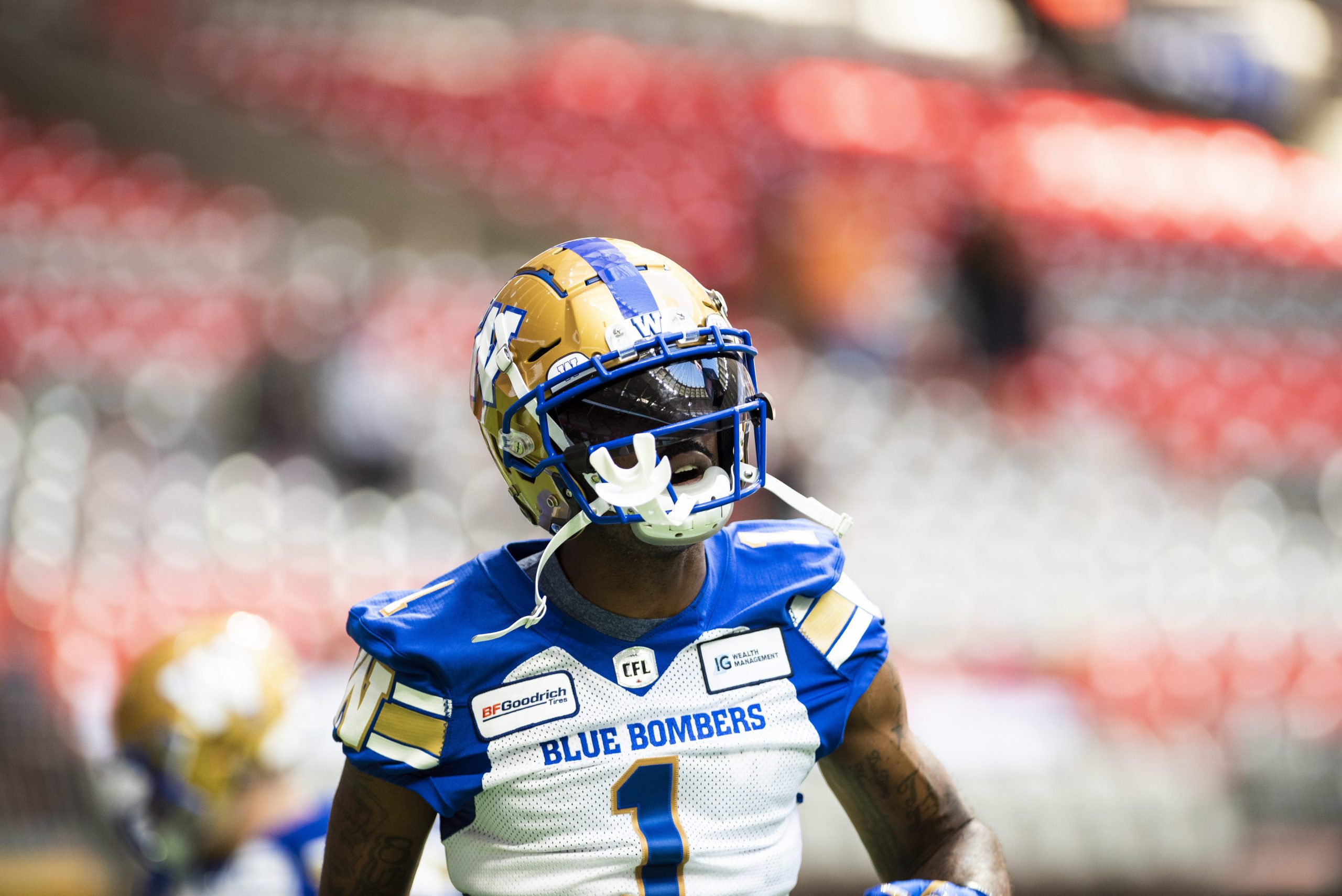 Count Bombers receiver Darvin Adams among the many players, coaches and staffers who are doing their part to get vaccinated. Please do your part to step up, too.