First & 10 | Demski looking at the positives 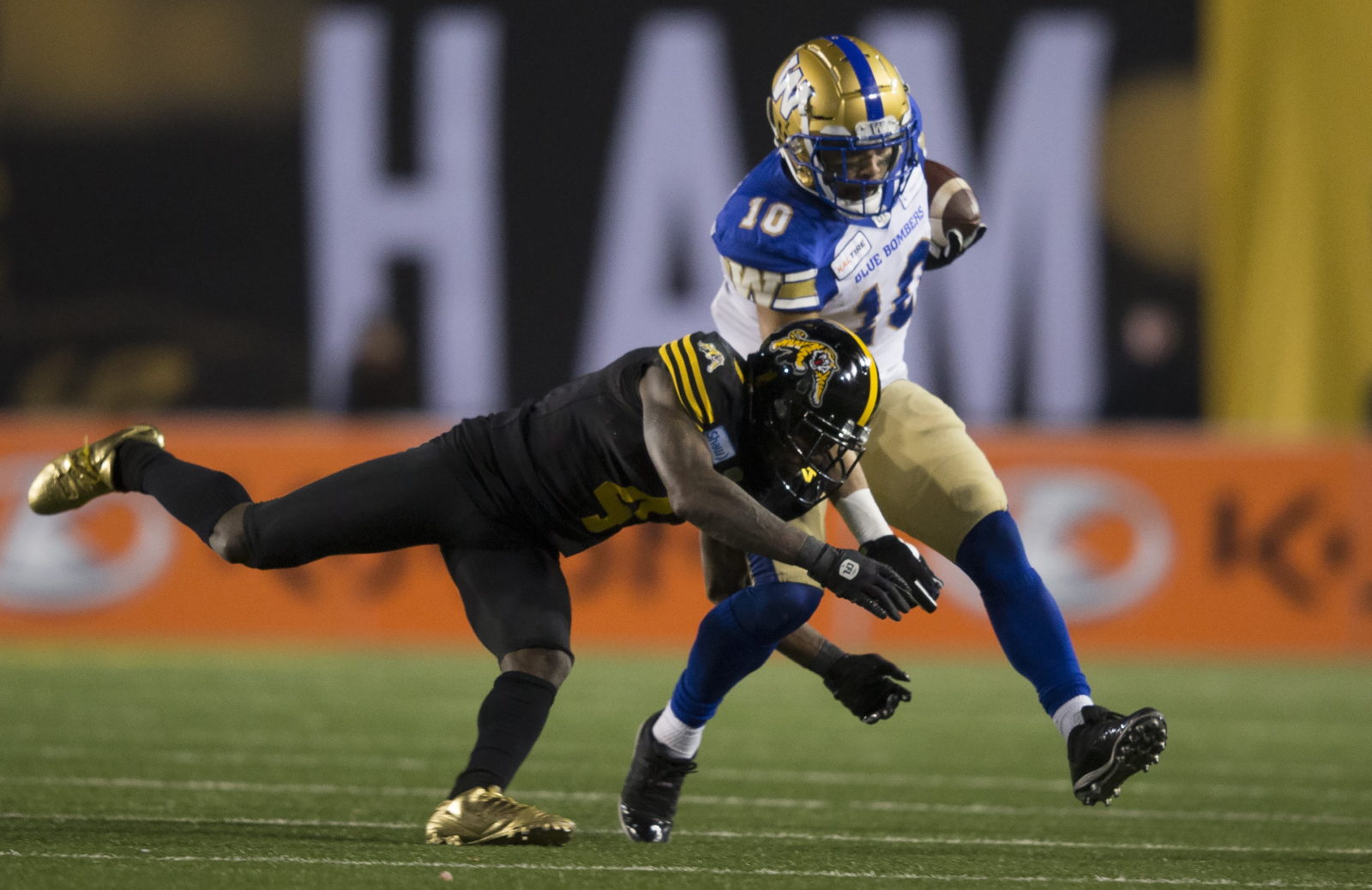 First & 10 | Demski looking at the positives

Two Winnipeggers are on the line and, as you might expect at this time of year – heck, at any time of year – the conversation begins with the customary comments about the weather.

“I’m looking outside right now,” began Blue Bombers slotback Nic Demski, “and this reminds me of last year in Calgary. And last weekend when it was so warm I was thinking, ‘this would be perfect playoff weather.’

“Actually, any kind of weather would be perfect playoff weather right now. I just wish we were playing.”

And what player or fan of the Canadian Football League isn’t thinking that right now, as we head into the second half of November?

Interestingly, the further we chatted the more it became apparent Demski wasn’t just missing suiting up on game day, but just being in the locker room on a regular basis. It’s a sentiment that has been echoed a few times by players this year, and is certainly a common theme when retired players talk about what they miss most.

“There was a rollercoaster of emotions earlier in the summer when we weren’t sure if we were playing,” said Demski. “I was going through that week in, week out for the longest time. I miss playing, but the big thing for me is I miss being around the guys. I’ve been playing football for, shoot, the last 18 years of my life. To have a year without it and not have that social part of it has definitely been different.” 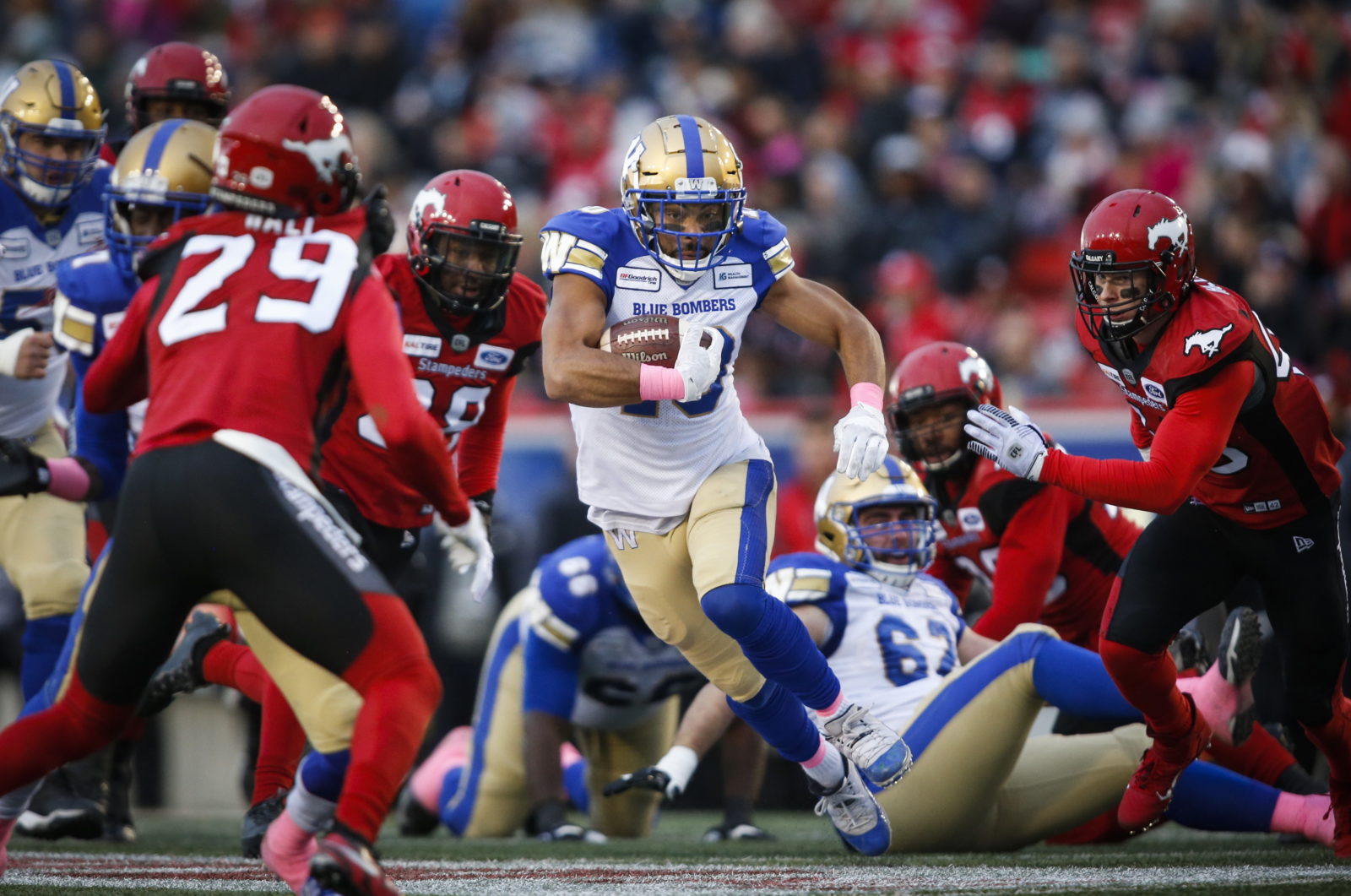 “It’s about being around the guys. There are a bunch on our team from both sides of the border… even more than that with the international guys we had. Not being able to interact with those guys and going to war with them on game day is probably what I miss most.

“I’ve been on teams where I’d get there 20-30 minutes before the day starts and then as soon as the day ends, I’m outta there. But this team, you enjoy coming to work, you enjoy being around the people there. Everybody just enjoyed each other’s company. That’s the stuff I miss. We definitely had a tight-knit group last year and without a lot of turnover this year it probably would have been the exact same thing.

“So, to have that social aspect taken away I’ll admit has been hard to get over. I know you have to roll with the punches, but…”

It’s been months of this, honestly. Months of lamenting a season lost, of the momentum the Bombers franchise had generated by winning the Grey Cup screeching to a halt.

As well, a player’s career can be short and for some, is measured by games not seasons. I asked Demski about that, about losing a year from a career in which the window is open for only a short time.

And it’s here where the Charleswood Broncos/Oak Park Raiders/University of Manitoba product did, in fact, roll with the punches – just as he suggested above.

“You’ve just got to be honest with it when you play football,” he said. “It can be a pretty short-lived career. At the same time you’ve got to look at the benefits and going through this, it’s been an extra year of rest for your body. My body hasn’t been hit in almost a year now so it does feel pretty good.

“So, is it a year taken off your career or is it a year to reset? That’s how I’m choosing to look at it now – as a chance to reset and get healthy for next year.” 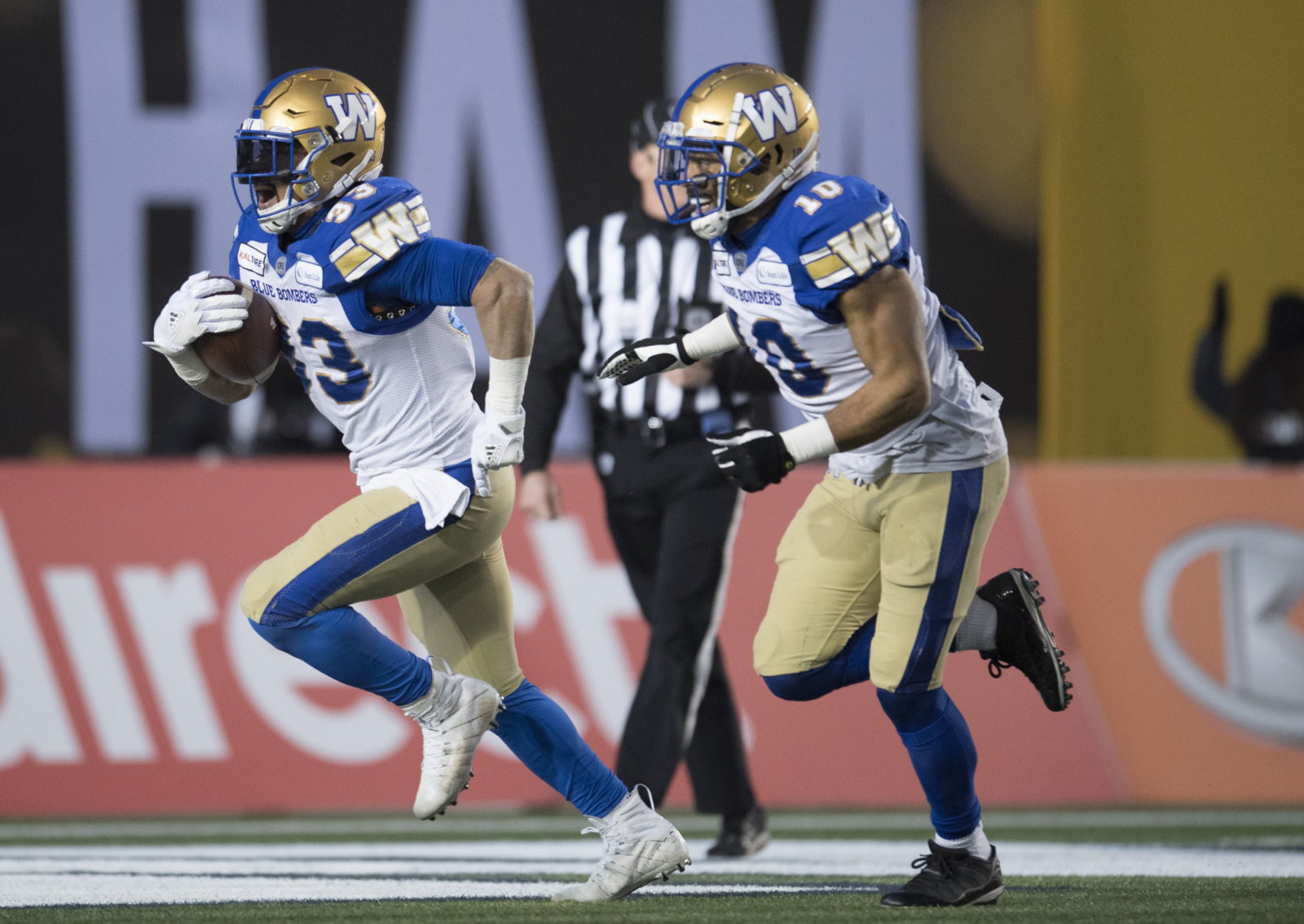 1. It was this time a year ago when Demski was arguably putting together the best stretch of his career.

He had a critical 33-yard rushing TD in the West Semi-Final win over the Calgary Stampeders and followed that up with five catches for 72 yards in the West Final victory over the Saskatchewan Roughriders. And in the Grey Cup, he pulled in four passes for 45 yards and rushed once for 22 yards.

I asked him this week during our chat if he was more ‘locked in’ or what his explanation might be.

“It was just the confidence from the coaching staff and the players around me,” he said. “We had the run in 2018 and to me I felt like I choked a little bit, honestly, because I didn’t make enough plays.

“So in 2019 and with the team we had and the confidence I had I wanted to put it all out there on the line. That’s also something I was looking forward to building on this year.”

2. Like a lot of players, he’s been forced to consider a life after football. To that end, he’s been taking courses in the Life License Qualification Program with Freedom 55 Financial and also taking a mutual funds course.

“I definitely have to get my mind on other things sometimes, because not playing drives me nuts,” said Demski with a chuckle. “With all the uncertainty right now I’m trying to have that in my back pocket just in case as a Plan B. With all the time off I’m just using the time to study for that. It’s a field that seems interesting to me.” 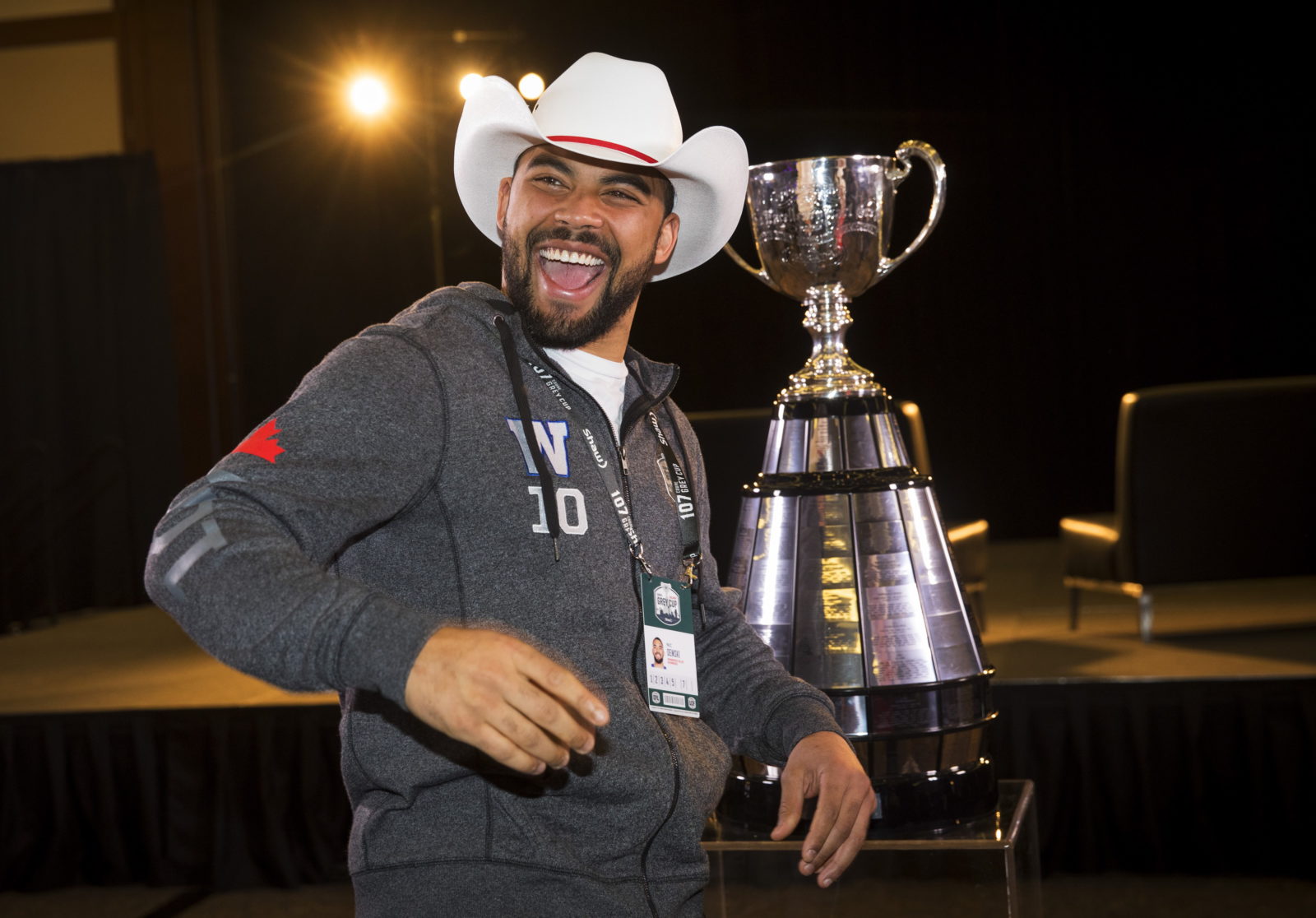 3. One more Demski-related note… a couple of weeks ago I interviewed former Bombers offensive coordinator Paul LaPolice for our ’10 Plays That Made A Champion’ series chronicling some key moments down the stretch in the club’s cup run.

Now the head coach of the Ottawa RedBlacks, LaPolice gave me some good-natured grief for not including Demski’s TD run in the West Semi-Final win over Calgary as one of the 10 plays.

For the record, we had three plays from the West Semi-Final:

The most recent instalment of the series was play #6, from the West Final, and can be found here.

4. LaPo, FYI, has settled in Stittsville, Ont. with his family and is liking his new home.

“We had a friend who said they had a friend who lived in Ottawa,” said LaPolice. “He’s a member of the RCMP, she’s a nurse and turns out they live right down the street from us. They’re like our new Winnipeg crew. He’s a huge Bombers fan and he came over the week I got my ring to take pictures to show his buddies.”

What LaPo isn’t liking, along with everyone else who loves this league, is having to wait so long to make his debut as Ottawa’s new boss.

“We’re trying to do football as much as we can,” he said. “We’re trying to have meetings. You can’t simulate what happens in the season, but I really like the staff we’ve put together.”

5. The CFL is trying to make do with no season in 2020 and is promoting its Grey Cup Unite week, which begins next Monday with commissioner Randy Ambrosie’s Fan State of the League virtual town hall, which will be streamed live on TSN.ca at 2 p.m. CT.

The events run through the 22nd and if you’re looking for a handy-dandy schedule to clip or print out, check this out: 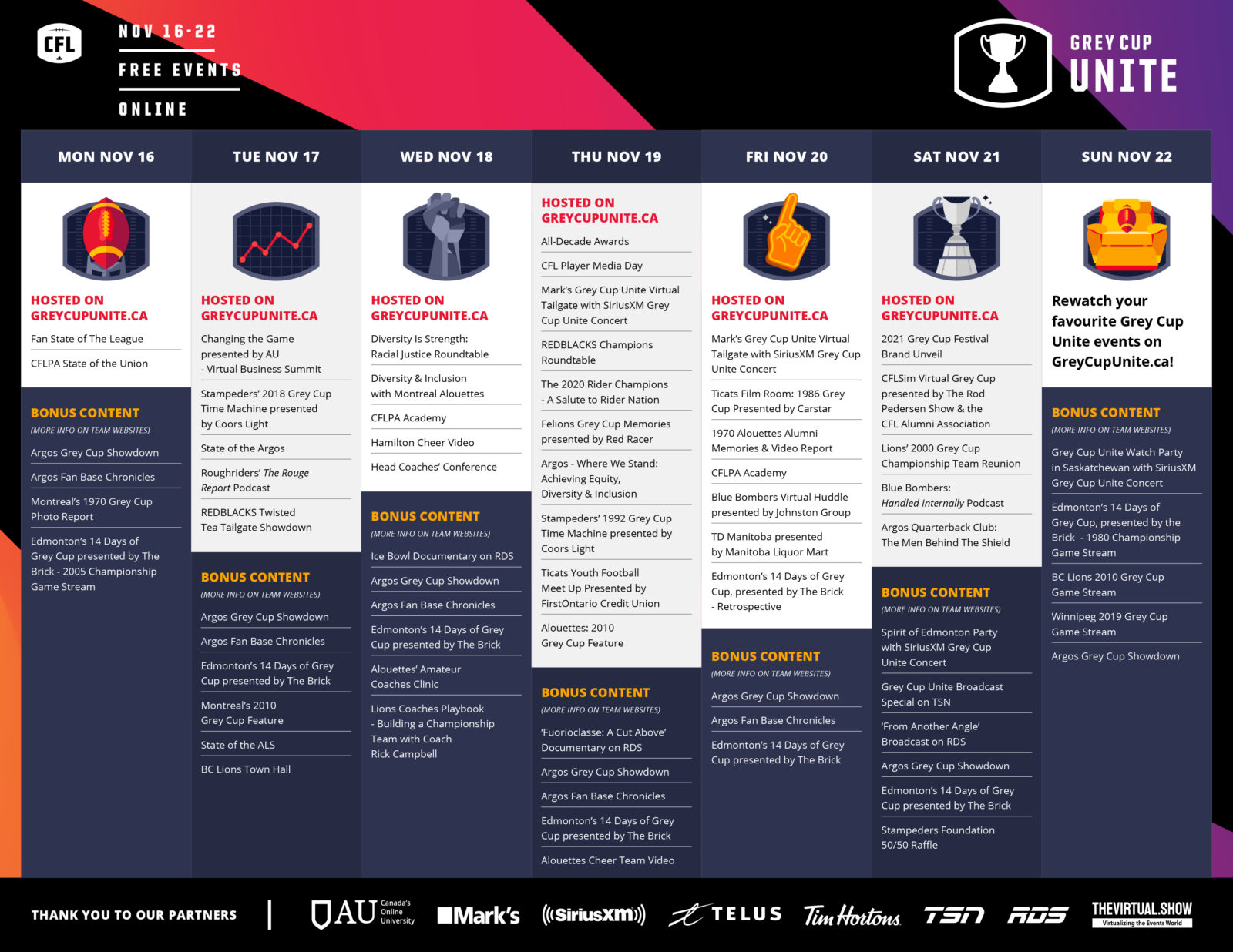 6. Some of the Bombers-related league events include a sit-down interview featuring Andrew Harris and TSN’s James Duthie during a two-hour special Saturday (7 p.m.) and a Diversity is Strength roundtable that includes Jackson Jeffcoat, seven other players and former Bombers-turned-Montreal Alouette head coach Khari Jones.

The Bombers have their own team events as well that can be found here.

7. A salute to the late Alex Trebek with three Bombers-themed Jeopardy questions (answers at the bottom of the article):

8. Not sure how many fans there are of the Wroclaw Panthers here in Manitoba, but there might be a few who are following the exploits of Bombers defensive end Thiadric Hansen with the Polish club.

Well, on Saturday Hansen and the Panthers captured the Polish league championship – giving the likable German his second title in a calendar year. And for those interested in watching the game, the stream is here.

9. Fingers crossed and prayers for all those who have been impacted by COVID-19. Sorry to hear that includes former Bombers cornerback Winston Rose, now with the Cincinnati Bengals.

The Bengals announced earlier this week that Rose, who has been on their practice roster, has tested positive.

10. And finally, this… one of the things that makes Andrew ‘Hustler’ Paterson such a good listen on TSN 1290 is the fact he doesn’t hide his fandom. He’s passionate about sports and makes no secret of his favourite players and teams. It can be infectious as a listener.

So, two thumbs up to the man for getting out of the hospital and good luck in your recovery.

After 7 weeks I am finally out of hospital! I can’t express my thanks enough to all the incredible doctors, nurses, therapists and support staff who helped me so much during my stay. Great to be home to continue my rehab and work to get all the way back. pic.twitter.com/AYizEPgaiH