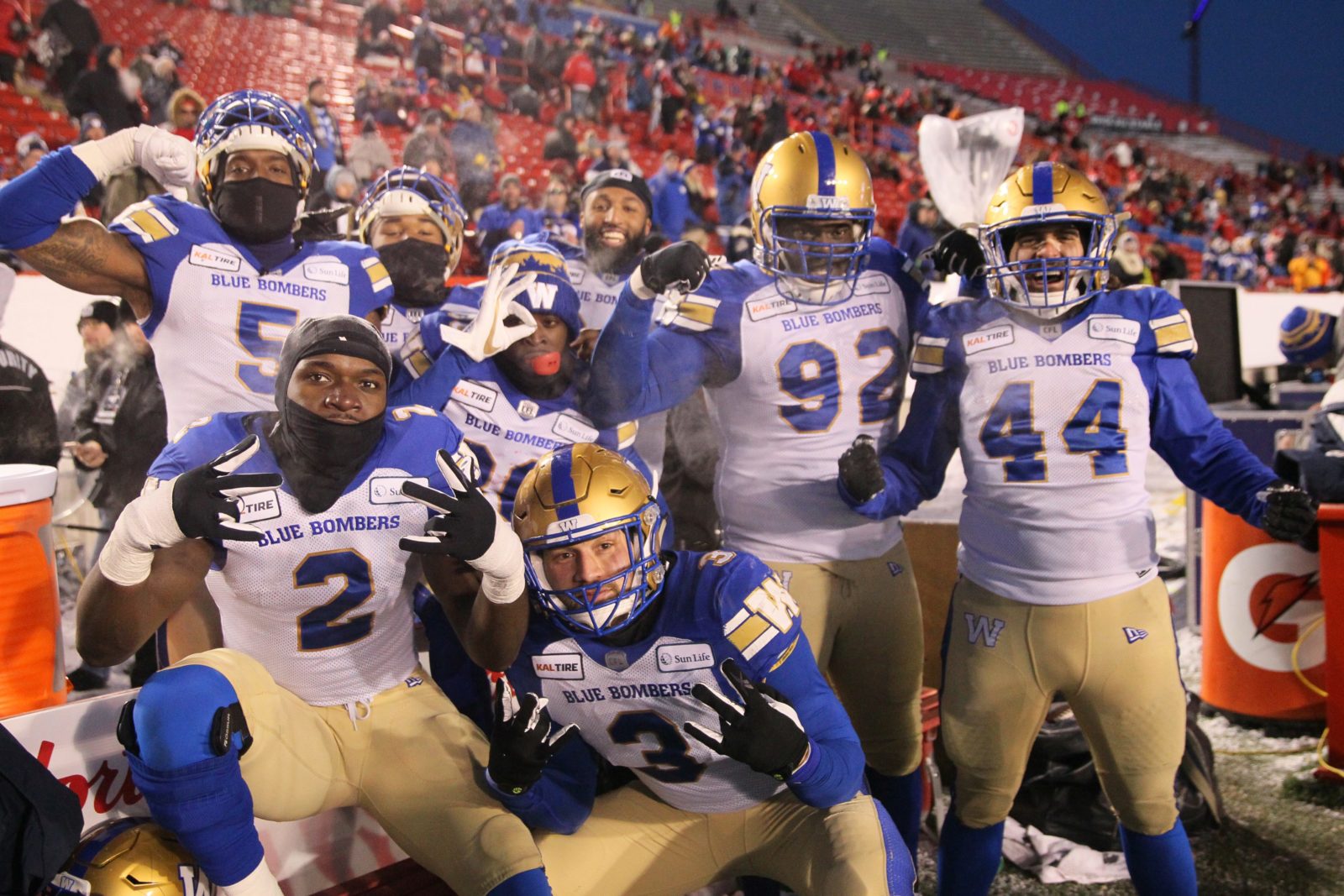 Before the world was turned upside down due to a global pandemic, this weekend was to continue an annual tradition for Canadian Football League fans who would normally be bundling up for playoff action.

The next three Sundays were to feature the East and West Semi-Finals, then the division finals, followed by the 108thGrey Cup in Regina. Alas, all we have right now are memories. Still, seeing as this was to be the first round of the playoffs, we thought we’d revisit our list of the Top 10 Bombers semi-final wins.

This one stands out not just because it is the most recent semi-final win, but as the first step in ending the longest Grey Cup drought in franchise history – one which had dated back to 1990.

The Bombers cranked out 195 yards along the ground, forced four turnovers, got touchdowns from Darvin Adams, Nic Demski and Chris Streveler, four field goals from Justin Medlock and, in the process, punched their ticket to the West Final a week later in Regina.

Teams played a two-game total point series back then and the Bombers opened with a 43-5 thrashing of the Roughriders in Regina (they fell 18-17 three days later but advanced with a 60-23 aggregate).

But we picked this game as #2 because a trio of CFL playoff records from that game still stand: Lorne ‘Boom-Boom’ Benson had SIX touchdowns, all along the ground; the Bombers intercepted eight passes, tied for a CFL record with Bud Grant, who would later becoming a coaching legend, setting a record with five picks.

The Bombers knocked off Edmonton 2-1 in the best-of-three West Final, then dispatched Balmy Beach in the Grey Cup Semi-Final before falling to Hamilton in the Grey Cup. 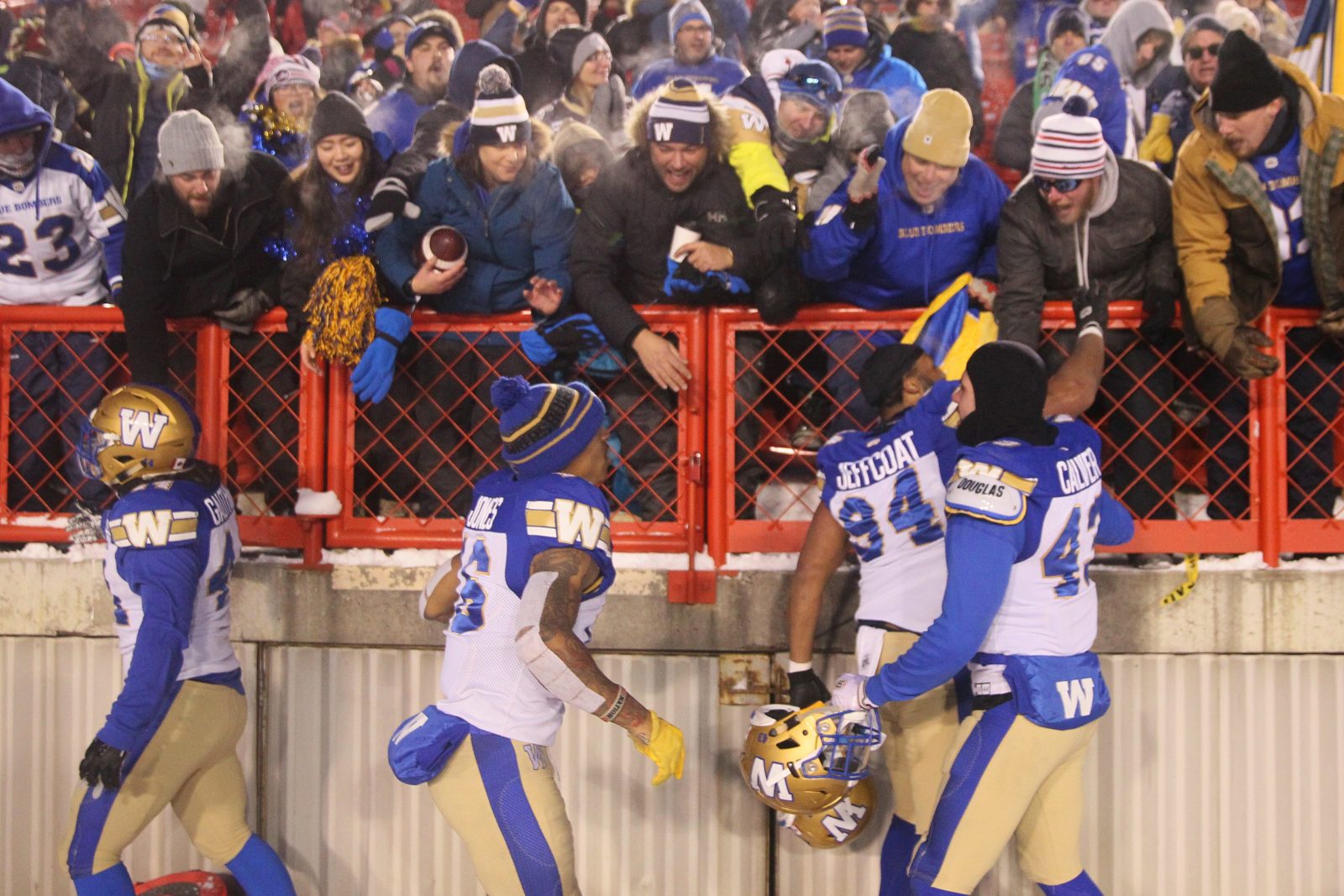 Before the most current drought ended, the Bombers longest championship absence had taken place over a two decade-plus stretch dating back to 1962. But the ’84 Bombers squad clobbered Edmonton  in the West Semi-Final – the 55 points scored is fourth highest in playoff history – before knocking off B.C. and then Hamilton in the Grey Cup.

Tom Clements threw four TD passes and ran for another against Edmonton in the semi-final, while Willard Reaves had over 200 yards from scrimmage – including 133 along the ground and two TDs of his own.

The Bombers won their first playoff game as an East Division club, changing divisions a year earlier following the folding of the Montreal Alouettes (and after a heartbreaking loss to Toronto in the 1987 East Final).

The Bombers finished second in the East Division with a 9-9 record, but had dropped their final three games of the regular season. That was reflected in the crowd size for the playoff game, with just 12,210 showing up at Winnipeg Stadium to watch the Bombers dispatch the Ticats. The Bombers then upset the 14-4 Toronto Argonauts in the East Final and the B.C. Lions in the Grey Cup – becoming the first .500 team to win the championship.

The game is significant because the Bombers win, at Winnipeg Stadium, ended Edmonton’s five-year Grey Cup dynasty. Quarterback Tom Clements set a Bombers franchise record with 445 yards passing – a mark that still stands. – by completing 21 of 28 passes for three touchdowns.

The Winnipegs scored two touchdowns early – by Fritz Hanson and Eddie James – and then the defence held in front of a crowd of 5,000 at Osborne Stadium. The gang from Winnipeg then knocked off the Calgary Bronks in the West Final before beating the Hamilton Tigers in the Grey Cup – the first in franchise history and the first by a team from Western Canada. 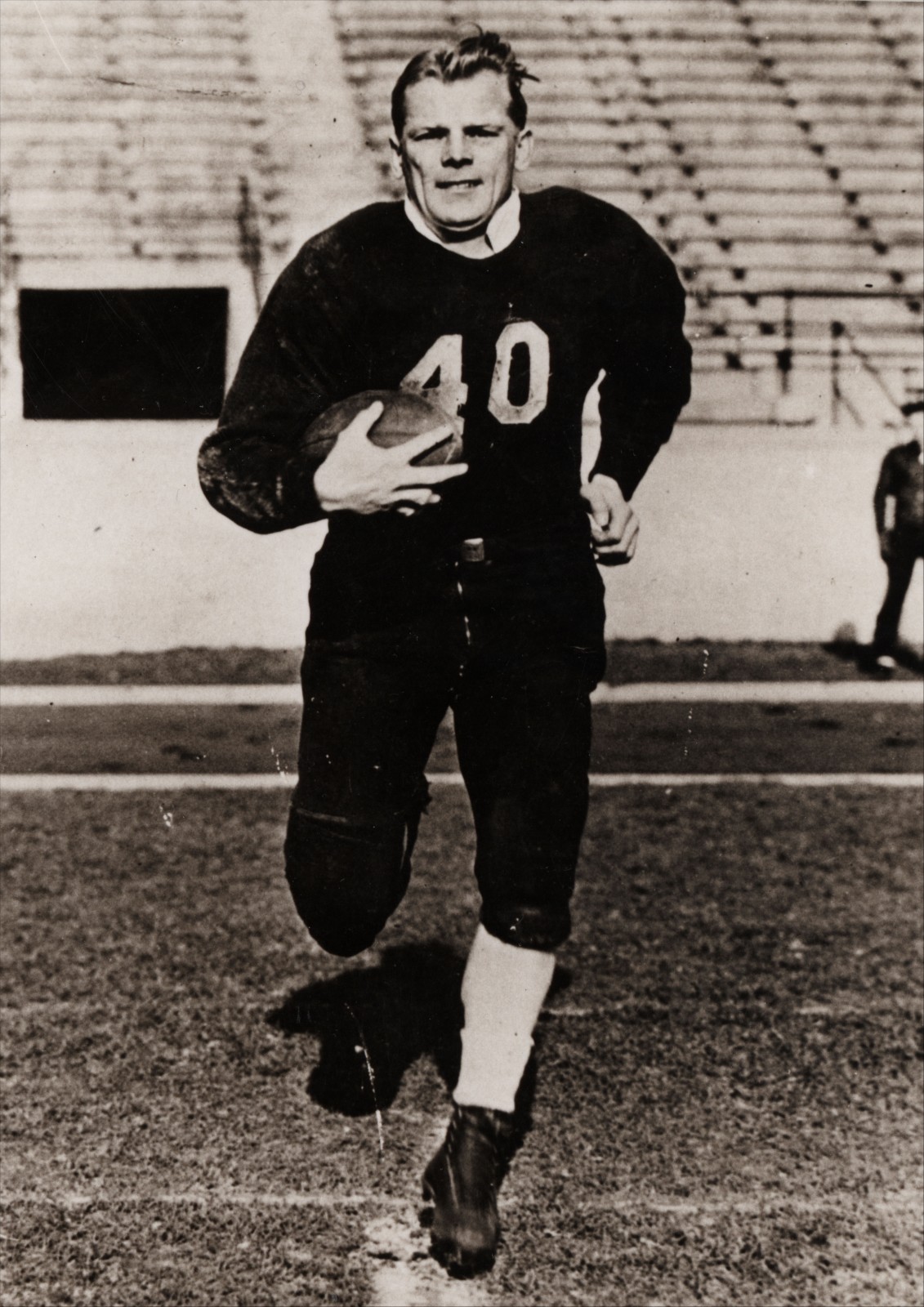 The Bombers and Stampeders had tied the first of a two-game total-point series 13-13, but the Winnipeg captured the second 15-3 to win the series 28-16.

Winnipeg then won the best-of-three West Final 2-1 over Edmonton before falling in the 1957 Grey Cup to Hamilton. What is significant here is the Bombers then finished first in the West Division in each of the next five years, winning the Grey Cup in 1958, 1959, 1961 and 1962.

The Bombers finished third in the ultra-competitive West Division with an 10-8 record and travelled to Regina for a Prairie showdown with the 12-6 Roughriders.

Saskatchewan was without starting QB Zach Collaros – who a year later would help lead Winnipeg to a Grey Cup – and had Canadian Brandon Bridge behind centre. The Bombers controlled the line of scrimmage, racking up 202 yards along the ground – 153 yards coming from Andrew Harris on just 19 carries. A week later the Bombers fell 22-14 to Calgary in the West Final.

The Bombers had not played in a single playoff game between their crushing 68-7 loss to Edmonton in the 1996 West Semi-Final until this game in Hamilton. And while Winnipeg would fall a week later to a powerhouse Montreal squad in the East Final, this win in Hamilton – the Bombers were 7-10-1, the Ticats were 9-9 – represented a turnaround for the franchise.

The club had switched QBs midway through the season with Khari Jones replacing Kerwin Bell, and he surrounded by talents like Milt Stegall and Charles Roberts, the Bombers had set the foundation for some successful years to follow.

The first paragraph of the story:

‘Fired on by years of humiliating defeats to a determination that could not be denied, the fighting purple-clad Winnipegs accomplished the seemingly impossible in Western Canada rugby Saturday afternoon by defeating Regina Roughriders.’

The game was played in front of roughly 3,000 fans at Carruthers Park with Carl Cronin and Greg Kabat the heroes for the Winnipegs, who would knock off the Calgary Bronks in the Western Final before falling to Toronto in the Grey Cup Semi-Final.