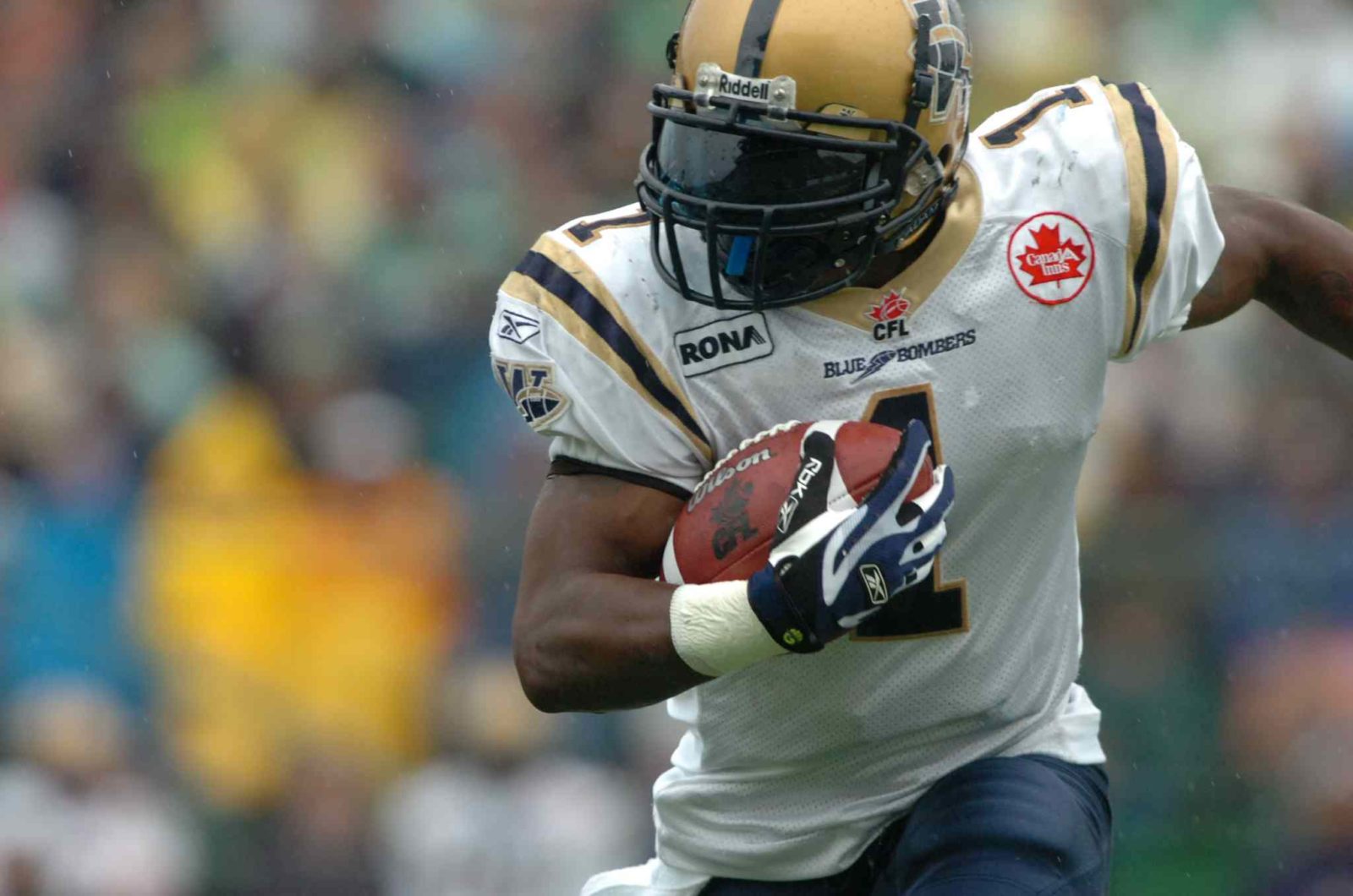 Earlier this week Bombers Senior Director of Player and Public Relations Darren Cameron and I sat down to record a couple of podcasts that will be coming soon, the second of which featured Charles Roberts.

Roberts isn’t just the Bombers’ all-time leading rusher; he’s a member of the Canadian Football Hall of Fame, the Winnipeg Football Club Hall of Fame and both one of the most electrifying and fascinating figures in the franchise’s long history.

And the man nicknamed ‘Blink’ by teammate Milt Stegall – don’t blink or you might miss him – stood all of 5-foot-7. That got us thinking of some of the Little Big Men in franchise history, the diminutive types who were still outstanding on the field. We’ve ranked them here, but after the first couple of names, this list is most definitely subjective…

Ranks atop the Bombers’ rushing list and his 10,285 yards – including a brief stint after he was traded to B.C. midway through 2008 – puts him fifth on the CFL’s all-time chart. Made the spin move a regular part of his repertoire and, as the old saying goes, was as slippery as a wet bar of soap.

The Bombers’ first superstar, he was dominant in the franchise’s first Grey Cup win in 1935, the first by a team based in Western Canada with a 78-yard punt return touchdown. He was just 5-7 and 145, but was concrete proof you can’t hit what you can’t catch.

Another of the Bombers’ early import players, like Hanson, Rebholz came north from Wisconsin and first joined the St. John’s Rugby Club in 1932 before signing with the Winnipegs. Sporting one of the coolest nicknames in club history – ‘The Wisconsin Wraith’ – Rebholz threw two TDs in the Grey Cup victory of ’35. 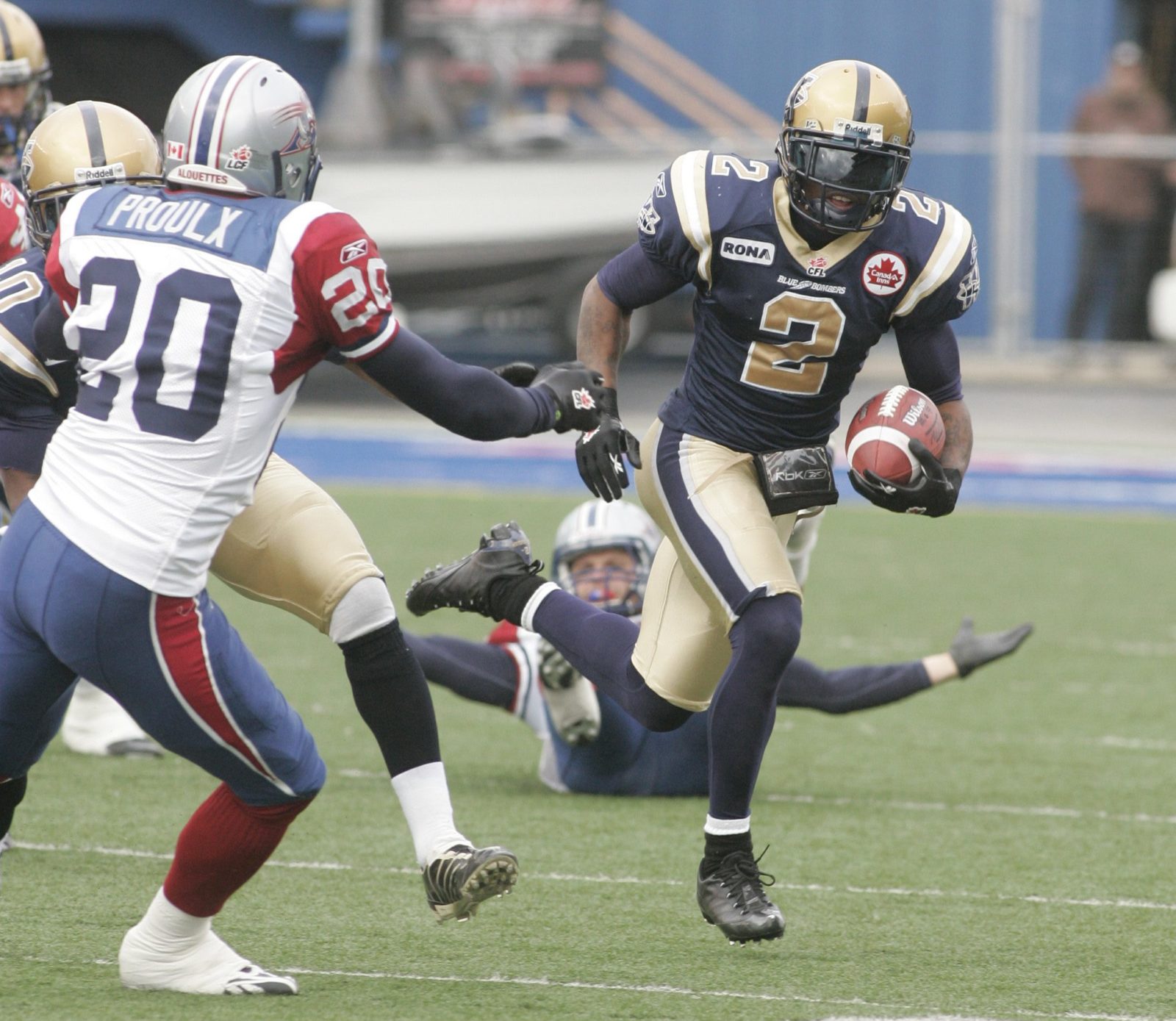 The Bombers signed the University of Alberta product as a free agent and he gave the squad consistent placekicking over his hall of fame career, eclipsing the 100-point mark in 11 of his 12 seasons. He was part of three Grey-Cup teams in 1984, 1988 and 1990 and retired as the club’s all-time leading scorer (later surpassed by Troy Westwood).

The versatile Winnipegger played at St. Paul’s and then the Winnipeg Rods before joining his hometown Blue Bombers. A member of the WFC Hall of Fame, Latourelle was an exceptional punt returner and would fill in occasionally in the offensive backfield and in the secondary.

He took over the starting RB chores not long after the departure of Charles Roberts and gave the Bombers some solid work. Was passed last year by Andrew Harris on the Bombers all-time rushing list, but still ranks seventh behind Robers, Leo Lewis, Willard Reaves, Jim Washington, Gerry James and Harris.

No list like this would be complete without mentioning ‘Mini’ Mack. He didn’t play for long in Winnipeg – he was released after a drug arrest – and later got into further trouble with a number of arrests after playing in the NFL. But he led the West Division in rushing in 1972 and won over thousands of Bombers fans with his dynamic play.

He was the No. 2 QB for a spell with the hallowed Notre Dame Fighting Irish before arriving in Winnipeg in 1932. He played halfback, receiver and linebacker for the Winnipegs and even coached the team. As Free Press sportswriter Vince Leah wrote in his ‘A History of the Blue Bombers’, Cronin was ‘a one-man wrecking crew, doing everything but sell tickets at old Wesley Park.’

He was primarily a kick returner, and a dangerous one at that. His best season with the Bombers was his first, 2004, when he racked up over 2,000 yards in kickoff and punt returns, scoring five times.