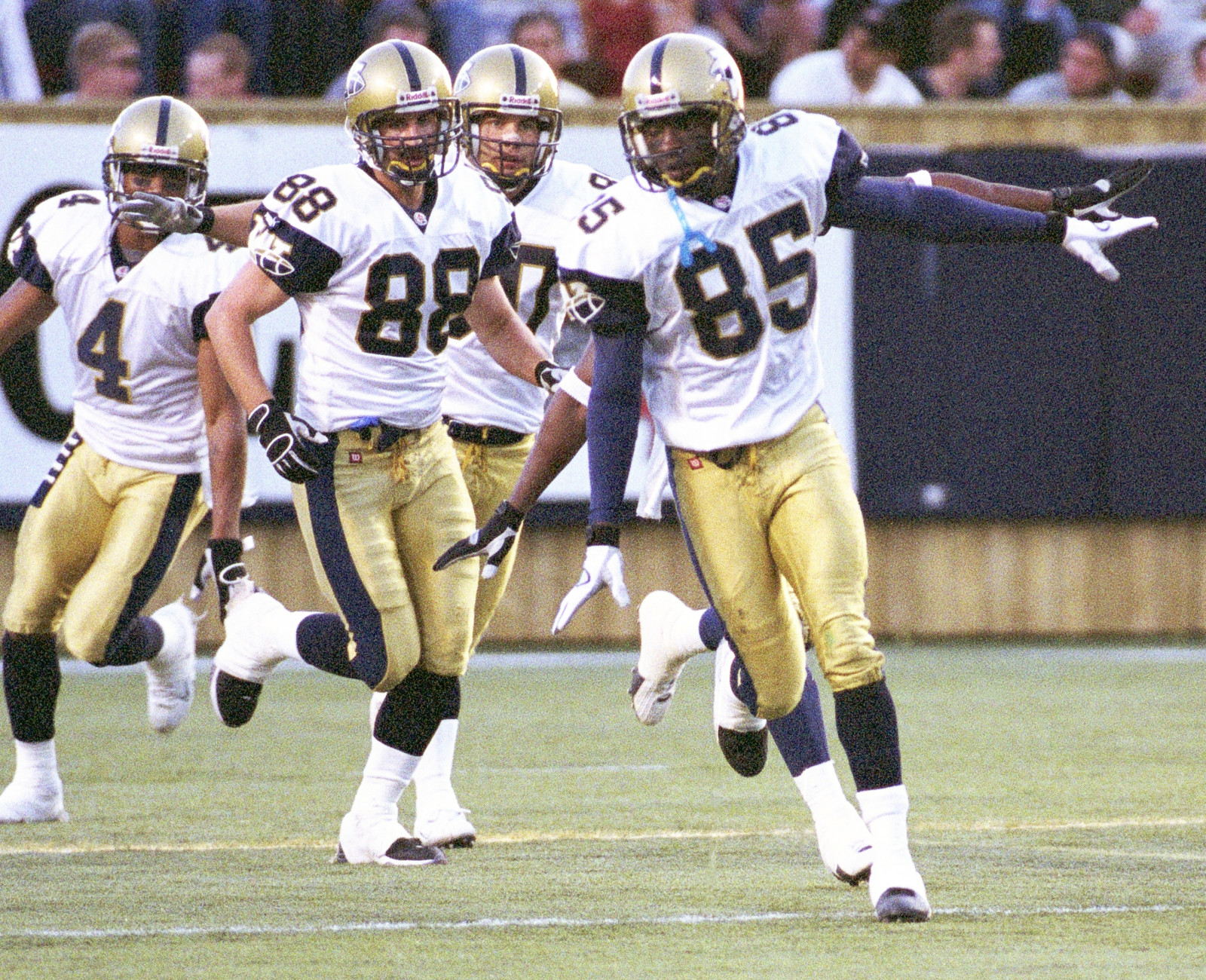 It was the legend himself who made notice of it last weekend with a tweet:

Yes, 25 years ago this past weekend Milt Stegall suited up for his first game with the Winnipeg Blue Bombers. It was the first chapter in what would become a memorable career for the receiver, all played in Blue Bombers colours.

As a tribute to the man and the legend, this week’s Top 10 looks at some of the most-memorable moments in his football career:

Stegall took a one-yard shovel pass from Kevin Glenn in front of a sold-out crowd at Canad Inns Stadium to move past George Reed and Mike Pringle and become the CFL’s all-time touchdown leader with 138. He would score again later in the same game on a 35-yard pass from Glenn for No. 139 and finish his career with 147 – a record that seems destined to stand for eons.

The Winnipeg Football Club didn’t wait long to add Stegall to its’ hall of fame, inducting him in 2009 – just a few months after he had announced his retirement.

The Canadian Football Hall of Fame would follow not long after, inducting him into its shrine in 2012 at a ceremony held in Winnipeg.

Stegall was added to the Bombers Ring of Honour in 2016 as part of the inaugural class that was unveiled during each home game that season.

In August of 2007, not long after breaking the TD record, he was honoured with the Order of the Buffalo Hunt, given a key to the city, and saw Arena Road (which used to lead up to the old Winnipeg Arena), renamed Milt Stegall Drive.

The Bombers dominated the Tiger-Cats in Hamilton, building a 28-0 lead before a late score prevented a shutout. That night also saw Stegall score his 23rd TD of the season, breaking the CFL record of 22 set by Cory Philpot in 1995 when he was with the B.C. Lions.

Stegall also set the Bombers’ single-season receiving yardage record that night, passing James Murphy’s mark of 1,746. He would add on to his total a week later and finish the season with 1,896 yards receiving.

Stegall’s numbers were jaw-dropping in 2002 as he pulled in 106 passes for 1,896 yards and 23 touchdowns. That year he led the league in receptions, receiving yards, yards from scrimmage, touchdowns, receiving touchdowns and 100-yard receiving games.

Stegall was named the CFL’s Most Outstanding Player for his efforts, meaning a Bomber had captured the award in successive seasons after Khari Jones was honoured in 2001.

Alas, the Bombers had fallen 33-30 to Edmonton in the West Final and were not playing in the Grey Cup the night Stegall was presented with the MOP award.

Milt had already eclipsed the CFL’s TD record a year earlier, but in a 39-9 win over the Argonauts in Toronto Stegall tied Allen Pitts’ CFL career receiving-yardage record on a 16-yard TD pass. He then broke it in spectacular fashion, pulling in a 92-yard pass from Kevin Glenn.

Stegall finished with 15,153 career receiving yards and held that record for four years before he was eclipsed by Geroy Simon in 2012. Stegall’s mark still ranks second.

Stegall was having a solid night receiving in a late July game in Edmonton. But the Esks had taken a 22-19 lead with just 15 seconds left and his numbers were going to be viewed as an afterthought in a certain loss.

But on the game’s last play Kevin Glenn found Stegall, who split a couple of defenders and raced 100 yards for the winning score.

He finished the night with 10 catches for 254 yards and the TD. The 254 yards receiving was the single-game best in his career and ranks second on the Bombers’ all-time list, behind only Alfred Jackson’s 308.

The Bombers’ regular-season record for TDs in a single game is six, set by Bob McNamara in 1956. Ernie Pitts almost matched that in 1959 with a five-TD game.

Stegall’s spectacular 2007 season saw him become the all-time TD king and the Bombers did advance to the Grey Cup that year – falling to Saskatchewan.

But during Grey Cup week Stegall was honoured with the Tom Pate Memorial Award, selected annually by the Canadian Football League Players’ Association and given to a player ‘with outstanding sportsmanship and someone who has made significant contribution to his team, his community and Association.’

It is named after Tom Pate, who was a 23-year-old rookie with Hamilton when he was critically injured in a game in 1975 and died three days later.

Stegall’s name isn’t even in the Bombers’ 1995 Media Guide, as he was signed during the season and suited up for the last six games of the ’95 season. In his first-ever CFL game – a 43-28 loss to the Stampeders in Calgary – Stegall finished with six catches for 93 yards and a 14-yard TD pass from Kevin McDougal with 24 seconds remaining. It was, of course, the first of many scores.