Just a few months before the Winnipeg Blue Bombers won a second Grey Cup in 1939 – on September 10, to be exact – Canada entered World War II.

What happened over the next six years before the conflict ended on September 2, 1945 dramatically impacted the planet and trickled all the way down to the local Winnipeg sporting scene and the Blue Bombers.

During that time the Winnipeg Football Club established a three-team city league comprised of the Bombers – a civilian team – the RCAF Flyers featuring military personnel and players from the University of Manitoba. At the end of the season an all-star team was comprised and played as the Winnipeg RCAF Bombers, falling to the Toronto RCAF Hurricanes 8-6 in the 1942 Grey Cup.

Several Bombers players were part of the armed services during World War II. One of the best players during that era was Jeff Nicklin, a halfback, flying wing and end who had been on the Grey Cup teams that won in 1935 and 1939. Nicklin joined the service in 1940 as a paratrooper, was one of the first Canadians to jump on D-Dy in 1944 and led his division in the Battle of the Bulge. Tragically, he was killed in Germany during Operation Varsity in March of 1945.

After the war the Blue Bombes reorganized and was comprised mostly of local Canadians. That cobbled together crew played a regular season against North Dakota State, Minto State Teachers College, the University of North Dakota, Bemidji State Teachers College, Concordia College and Regina before knocking off Calgary in the Western Final. The Bombers were no match against the Toronto Argonauts in the 1945 Grey Cup, falling 35-0.

The times were changing, however, and the 1950s would mark a turnaround for the franchise and the start of the Glory Years. 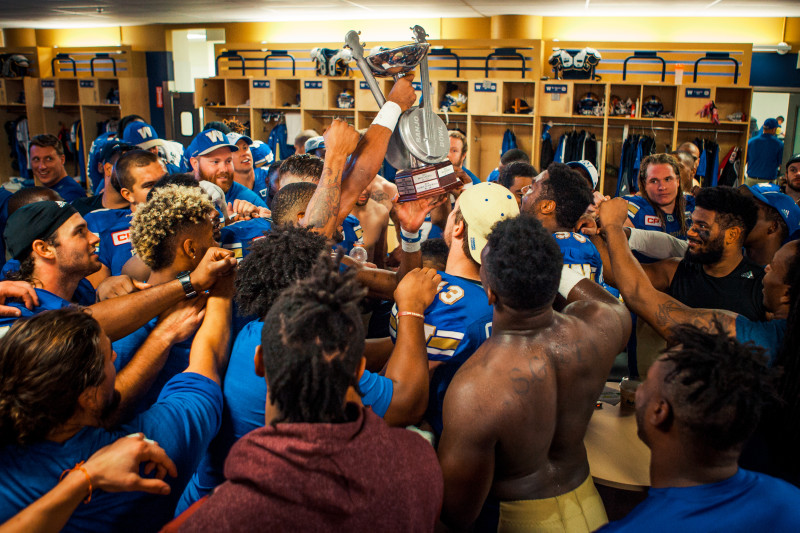 An oral history of the Banjo Bowl