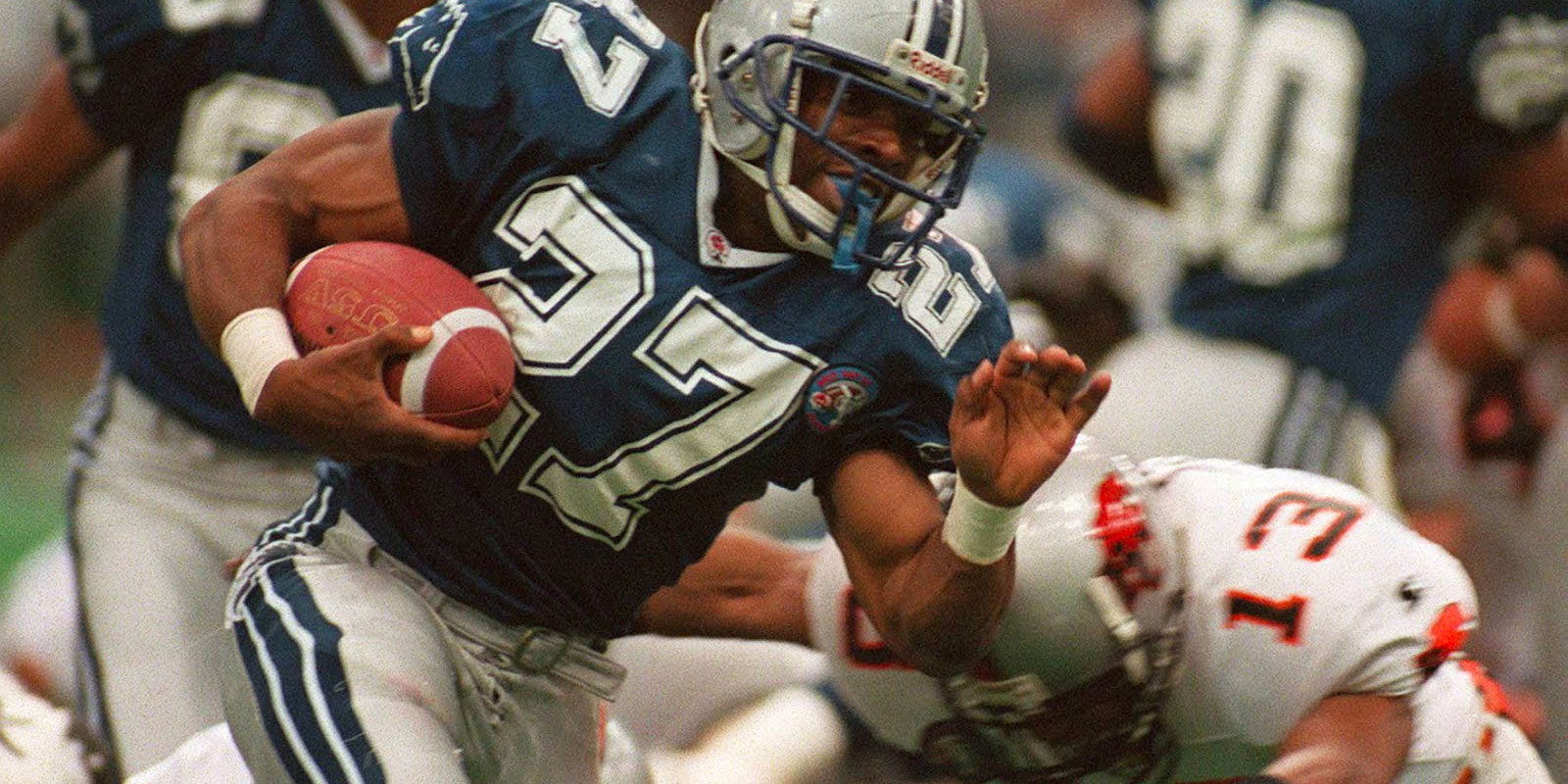 There have been many weeks where I’ve hunkered down to tap out this weekly collection of thoughts on the Winnipeg Blue Bombers and the Canadian Football League and wondered about its shelf life on bluebombers.com.

After all, it seems like one ‘drop-dead’ deadline after another has come and gone for a go/no-go decision on a 2020 season – including, apparently, this week – with no further clarity.

And as the week reaches Friday and a deadline approaches for this week’s First & 10 column, it comes with an understanding that each new edition could become moot if news suddenly breaks on a thumbs up or thumbs down on 2020.

Everything we’ve heard is that both the CFL and the CFL Players’ Association, along with the federal and provincial governments and the health authorities, are still in conversation in an attempt to make the hub city concept here in Winnipeg work.

I do not expect there to be a resolution to the @CFL season today. It appears the wait is heading into the third week of August. Woulda bet the farm against that a few weeks ago … but here we are. #CFL

Those ongoing efforts aside, I’m hearing from more and more fans of this league who have already thrown up the white flag on a 2020 campaign. That’s more than a little concerning, both in the short term and possibly the long term.

Meanwhile, those of us who are still optimistic have adopted a hope-for-the-best-but-expect-the-worst approach to all this. Clearly there are many who have it much, much worse thanks to this awful virus, but the daily uncertainty for those who love the league can be, frankly, exhausting at times.

The down time – this excruciating period of wait – has led to many opining about the CFL’s business model and what needs to change for 2021 and beyond. It’s a necessary discussion, but likely not a topic anyone in the league is ready to hash out in full until a decision is made on this year.

Maybe we can debate how the CFL might reinvent itself in 2021 and beyond in a later First & 10, but we should also remember how this league has already survived and rebounded so often during its existence, from franchises disappearing and reappearing on the map to the failed U.S. expansion years in the mid-90s.

And it’s there – the U.S. expansion days – that we’d like to revisit a bit as we continue this week’s column… 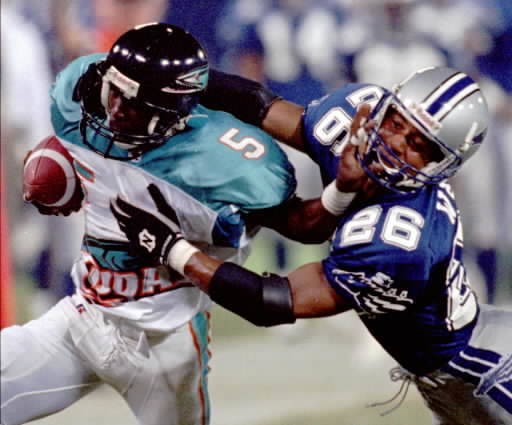 1. A few weeks ago, yours truly reached out to CFL head statistician and numbers guru Steve Daniel for details on a specific game – the Bombers’ visit to historic Legion Field in Birmingham for a showdown with the Barracudas on August 12, 1995.

As always, Steve was accommodating with the information but he added this line at the conclusion of our correspondence: ‘Why the fascination with this particular game?’

Here’s why: that game is of quasi-significance because it marked the last regular season contest the Bombers would play against an American opponent during the CFL’s U.S. expansion days. And it was 25 years ago this week.

Just for the record, the Bombers were squashed 50-24 that day in front of an announced crowd of 17,328 at the 75,000-seat home of the Crimson Tide. Matt Dunigan, who had left the Bombers for Birmingham in free agency that winter, rallied the Barracudas from a 9-3 deficit by throwing for four touchdowns and running for another.

Those seasons, 1993-95, brought the Bombers to places for regular season games that seem unimaginable today – to Birmingham, Sacramento, Baltimore, Shreveport and Las Vegas.

The Bombers’ first-ever foray south was a 30-18 win over the Sacramento Gold Miners at Hornet Field in the California capital on August 21, 1993. Frankly, nothing about that game seems memorable all these years later, but I do remember Chris Walby killing it at the day-before media availability – so much so that a sportswriter from The Sacramento Bee remarked in the moment ‘This guy should be performing at The Comedy Store.’”

The Bombers’ fiercest U.S. rival were the Baltimore Stallions, whom they faced twice in the playoffs – both losses – and all of the excursions south often included a statement from players, coaches and media that ran along ‘Can you believe we’re playing here, where the Crimson Tide play?’ Or, ‘Who would have thought we’d be covering a CFL game in Louisiana?’

Those were bizarre and controversial days, to be sure, as the U.S. teams fielded rosters featuring only Americans – after a fight from the CFLPA – in what led to a distinct U.S. vs. Canada dynamic through the three seasons.

But after Dunigan left for Birmingham, a mediocre ’95 squad went 7-11 – four losses coming against U.S. teams in the regular season and another defeat to Baltimore in the playoffs that November.

And so as we remember this bizarre foray 25 years later, here are the results and announced crowds from the games against U.S. teams. 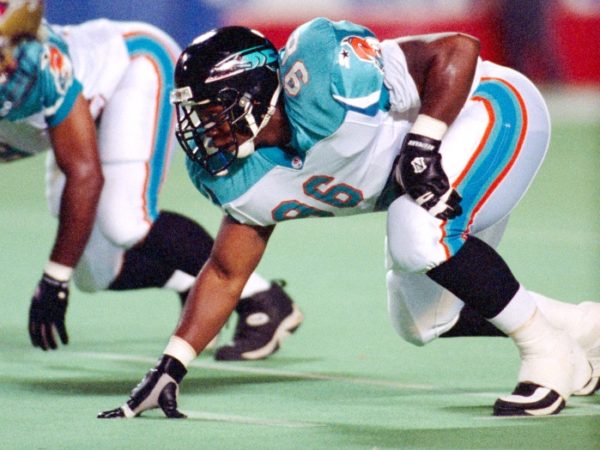 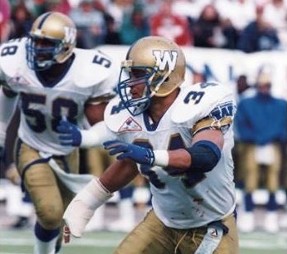 2. That crowd total for the Bombers’ lone trip to Vegas in October of ’94 by the way – a whopping 2,350 – is not a misprint. What’s interesting is it was estimated at the time that 800 of that crowd might have been from Winnipeg as fans flocked from Manitoba to Sin City.

In fact, the attendance became so horrible in Vegas that the last-ever game in their history – a November 6 date against Edmonton – was moved to Commonwealth Stadium. If you love the throwback stuff as much as I do, the Bombers-Posse game can be seen here in its entirety.

3. One more, if you will indulge me, before we move on from the U.S. expansion years. As the crowds dwindled in every locale but Baltimore, everyone who followed the league knew the experiment was on borrowed time.

I started to hit the concession stands at a few of these spots to grab some merchandise, thinking they would be unique CFL collector’s items. Those items are still gathering dust in my office on Chancellor Matheson. 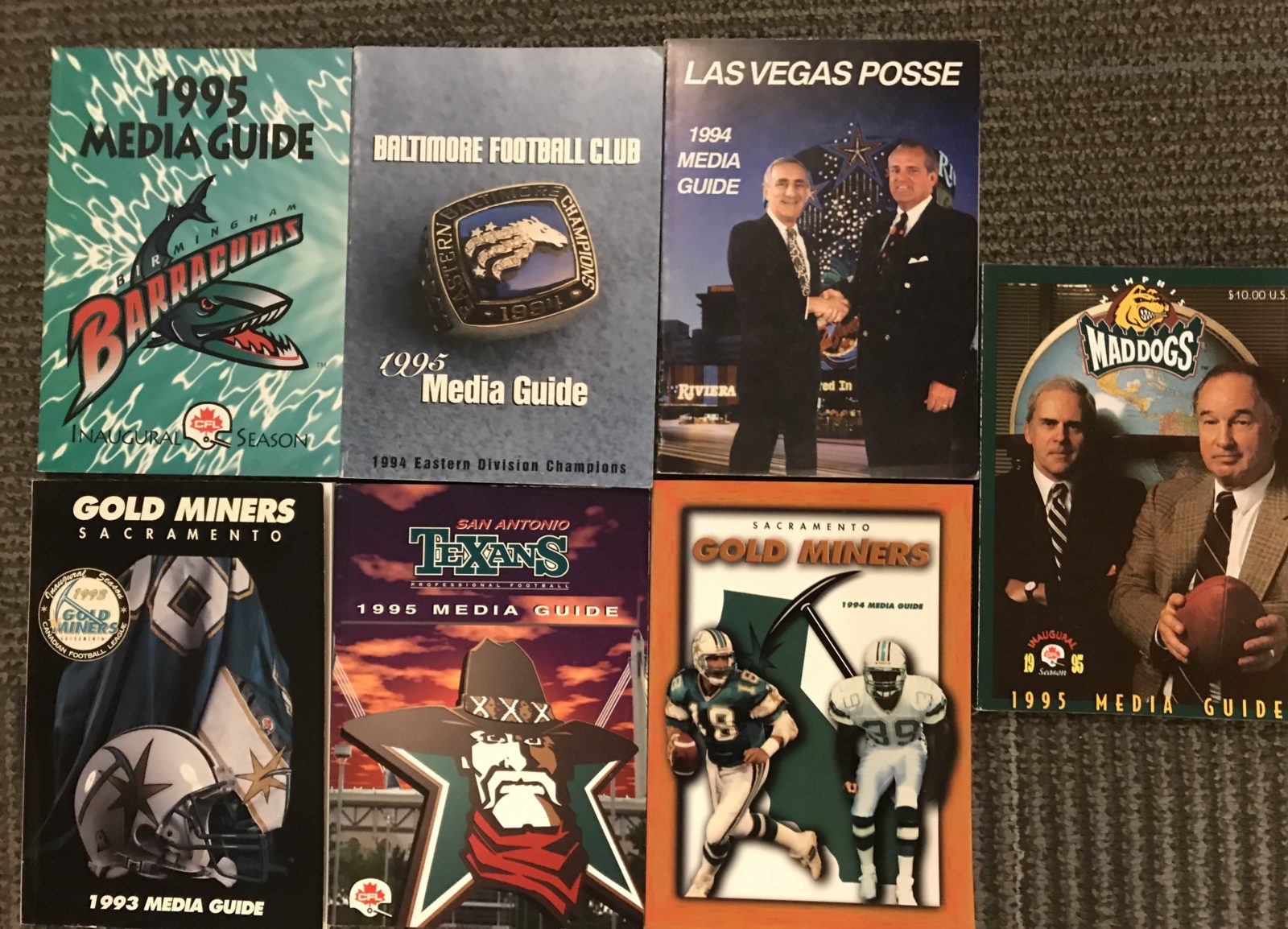 4. Waiting on a resolution of a potential CFL season reminds me of the line from The Clash hit ‘Should I Stay or Should I G0? “This indecision’s bugging me…”

CFL fans are living that right now, but imagine being in a team’s football operations department? It’s not just about potentially managing a roster for a condensed training camp, but also the logistics behind moving an entire operation into a bubble.

Former Bombers GM Brendan Taman, now with the Alouettes, touched on that in the ‘Growing The Game’ podcast this week.

5. CFL.ca has been posting a ‘Best in the League’ series on its website and it’s been a cool vehicle to allow players to weigh in on the various categories.

The latest – Best Playmaker – can be found here.

There was also a suggestion, rightfully so, that B.C. receiver Bryan Burnham was overlooked.

Here’s a question for fans – what would constitute your definition of a ‘playmaker?’ If it’s the consistent ability to make highlight-of-the-night plays, then the men listed above absolutely crush it.

But let’s throw this in there for debate – doesn’t Andrew Harris qualify as a playmaker? He’s captured the rushing title three consecutive seasons with 3,805 yards total and 18 rushing TDs, and added 233 receptions and another eight TDs over that same span. He may not be as flashy as Banks, Adams, Jr. and Evans, but that’s a dude making a whole pile of plays.

6. From the Department of Shameless Plugs: join Canadian Football/Winnipeg Football Club Hall of Famer James West and I this Sunday at 3 p.m. on the Bombers’ Facebook page for the second of our Virtual Alumni Reunions with members of the 1990 Grey Cup team.

We are back this Sunday with another edition of our virtual alumni reunion!

It’s a good collection of guests and, I’ll trot this out again as an unheralded-yet-amazing stat: that 1990 Bombers defence set a CFL record that still stands with 48 interceptions. Just by comparison, Calgary led that category last year with 26 with the Bombers second at 24.

7. An update from a story we brought you a few weeks ago about former Bombers defensive tackle Tyrone Rodgers and his own personal battle with Covid-19.

I texted with Tyrone this week for an update and he said “I’m doing a lot better now. Thanks for checking in.”

8. Condolences to former Montreal running back William Stanback – now in camp with the Los Angeles Raiders – after he lost both of his parents in a 10-day span. His father William, Sr. died from bladder cancer on July 21 and his mother Patricia on July 30 from a heart attack.

9. This week’s good read is another entry from Rob Vanstone of The Regina Leader-Post, who offers this reasoned take on the CFL’s current predicament.

10. And, finally, we mentioned that throwback video to the Bombers-Las Vegas Posse game from 1994 above. Thanks to the fans at CFL reddit for providing a link to the 1973 Grey Cup game between Edmonton and Ottawa.

Just watch the pre-game show for a sense of what the CFL once meant – and still does – to millions in this country.