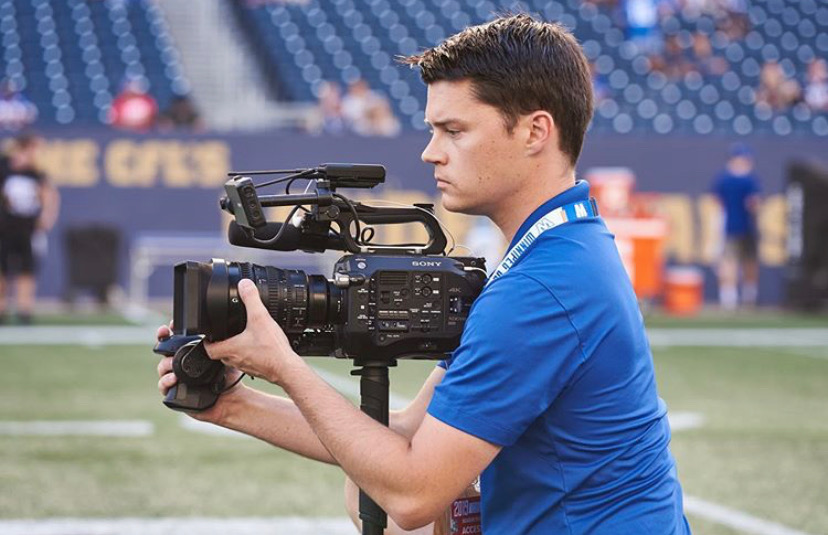 The Winnipeg Blue Bombers acquiring Zach Collaros, Cody Fajardo’s pass hitting the upright in the Western Final, and the Bombers raising the Grey Cup — you can relive it all in big thanks to Riley Marra.

Marra spent the first six weeks of working from home during the COVID-19 pandemic producing Road to the Grey Cup, a 49-minute video feature highlighting the Bombers’ run to end their 29-year championship draught.

“Probably the last three or four nights of working on it, I stayed up until two in the morning,” said Marra.

“There were definitely nights where my girlfriend said, ‘there’s literally nothing going on tomorrow, you can just work on it in the morning.’ But I was feeling it, so just kept working.”

The video was originally supposed to have player interviews, like Andrew Harris talking about a specific play, but that changed when Marra and the Bombers’ staff were forced to start working from home.

Marra is the Digital Media Manager for the Blue and Gold and is the fifth subject in our Unsung Heroes series where we profile some of the staff who work behind the scenes with the football club.

The Guelph, Ontario native and now ‘honourary Manitoban’ first studied videography at the College of Sports Media in Toronto. He started freelancing with the CFL after he graduated in 2014 and at the same time, started his first full-time sports media job with TSN as a story editor.

“I was one of those guys in the background when you watch SportsCentre that’s running around,” Marra said with a laugh. “Depending on what the producer wanted, I made highlight videos, wrote scripts and the anchors like Kate Beirness or Dutchy (Darren Dutchyshen) would read them on-air.”

Marra worked for TSN for three years before he literally hopped into the Bombers’ office in 2017 – he was on crutches for the first day on the job. Prior to making the move to the Manitoba capital, he was playing touch football with friends from work and tore his ACL. That’s when Marra knew he needed a job with more stability and stumbled on the Bombers’ job posting online.

The youngest of seven siblings, Marra joins five of his brothers and sisters who have since moved away from their childhood home in Guelph. 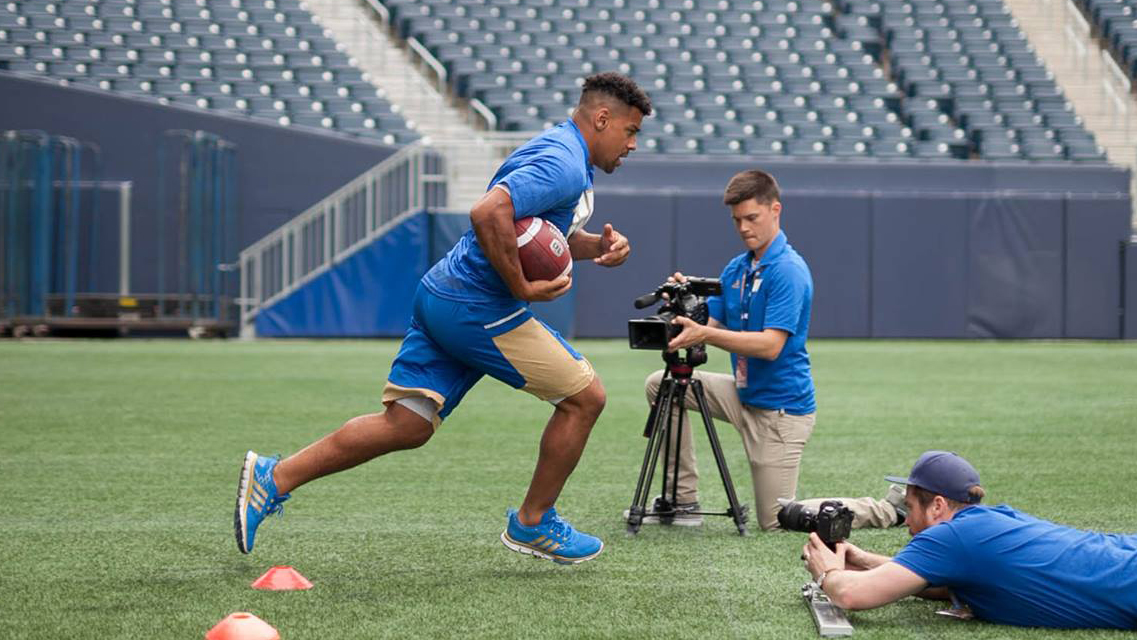 “I have a brother in Japan who moved for work, two sisters in Vancouver. Maybe I kind of saw them lead by example,” said Marra. “Moving to Winnipeg I wasn’t sure how long it would be for. I thought it was an opportunity and if it didn’t work out, I’d move back home.”

Moving away from home for the first time, Marra underestimated how hard it would be to make friends right away, but the transition at work went smoothly and he now considers himself an adopted Winnipegger.

“Everyone in the Bombers organization is super friendly and helpful,” said Marra. “They knew I was kind of here by myself, so they were all kind of looking out for me, which was nice.”

As Digital Media Manager, Marra does a lot of video editing, runs the team’s social media accounts, produces content for the video board during games, helps with commercial spots for TV, films from the sideline on game days and edits his footage into video features.

However, he admits coming up with the perfect Tweet is one of the hardest parts of the job.

“I think I’m a funny person,” Marra said with a laugh. “But it’s hard to type it out and then look at it, because then you start thinking of better ideas. Sometimes I’ll be sitting at my desk for a long time thinking of a perfect reply to a Roughriders’ Tweet.” 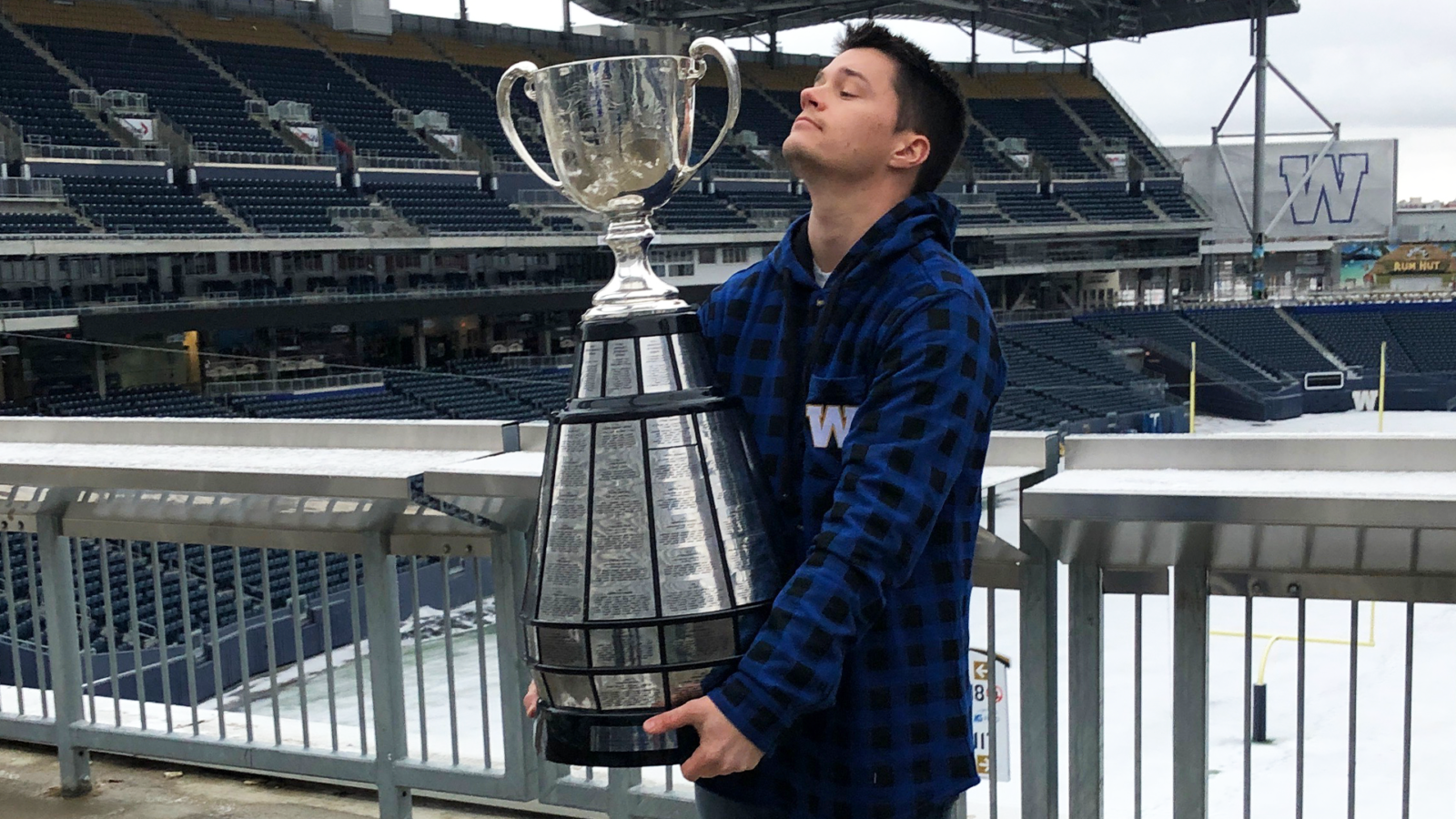 When it comes to social media, Marra will bounce ideas around with Rhéanne Marcoux, the team’s Director of Creative and Content, or with Sam Calvert, who runs Valour FC’s social accounts.

Marra’s favourite part of the job is editing videos and putting together content like Road to the Grey Cup.

“I really enjoy social, but without video I would be pretty heartbroken,” said Marra. “You get to create something that you’re proud of and you can rewatch it. You can only look at a tweet so often.”

Marra’s job during the pandemic started with work on the Grey Cup video, but now he spends the majority of his time working on social media. Virtual huddles and Instagram Lives with players have become a regular weekly staple for the team.

Though he’s now in his fourth year with the organization, working closely with players and seeing the fans around the city, Marra fully didn’t realize how much the Grey Cup win meant to the players and city until last November.

He was working the Grey Cup parade when he saw something that still sticks with him today.

“There was a moment I remember looking up and seeing construction workers working on buildings 15 floors up,” said Marra. “They stopped working and began cheering as the parade went by and that was pretty crazy to see. I don’t know when that experience will happen again, but it was really cool.”