A Mother’s Day Tradition Carried on 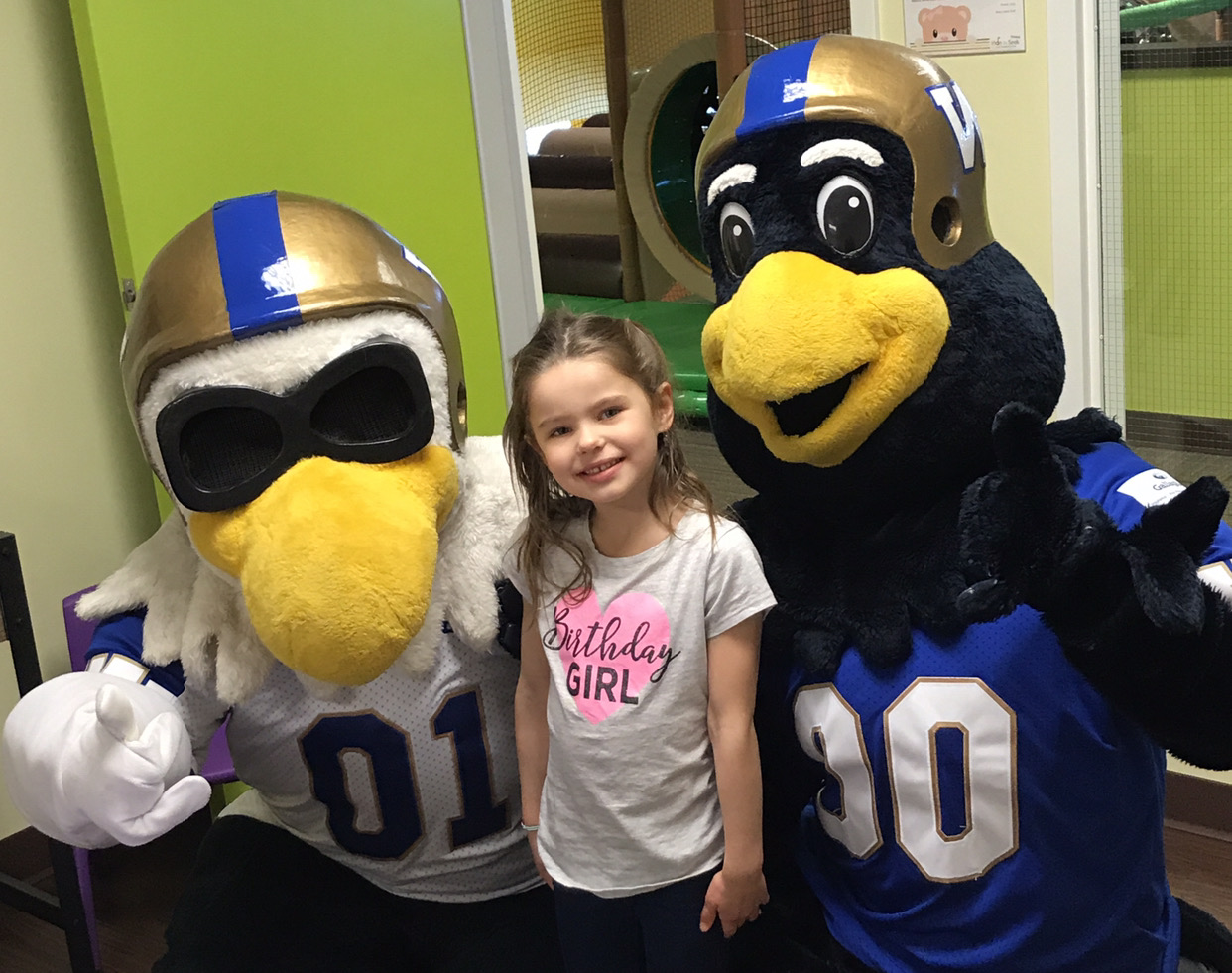 A Mother’s Day Tradition Carried on

A photo of six-year-old Kylyn Molinski Sereda and Winnipeg Blue Bombers’ mascot Buzz walking down the street outside Kylyn’s home with a big Blue Bombers ‘W’ flag between them marks a six-year tradition.

The Molinski family attends the Winnipeg Blue Bombers’ Mother’s Day brunch every year, but the event is one on a long list of cancellations due to COVID-19. Each year, the family takes a picture of Kylyn leaving IG Field hand-in-hand with Buzz and they wanted their tradition to continue while respecting social distancing guidelines.

“The photo was the only thing that would have completed my mom’s Mother’s Day, and mine too,” said Kylyn’s mom, Marla. “There was no present in the world we could give her, it was all about getting that photo.”

This year’s photo was important to Darlene, Kylyn’s grandma, because her health recently took a turn for the worse. She was diagnosed with cancer in March and in April, it was identified as Metastatic Colorectal Cancer, which has spread to her abdominal lining. The cancer has spread fast and aggressively and can’t be operated on, but Darlene has started chemotherapy.

“We were all disappointed the brunch was cancelled. I guess we’d have to wait until next year to get our picture,” said Darlene. 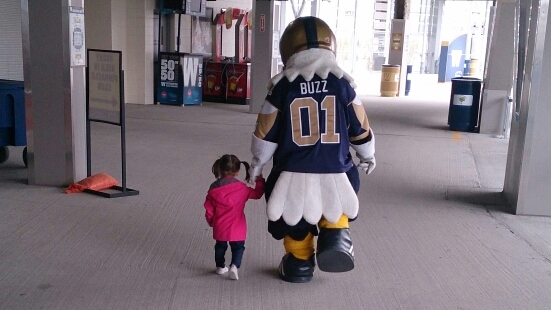 “I’m going through cancer again, so in the back of my mind I was thinking ‘is this going to be the last year?’ So, I’m really thankful to Marla, Buzz, and the organization for this experience this year,” Darlene added through tears.

An old photo of Buzz and Kylyn is the wallpaper on Marla’s phone and a few weeks before Mother’s Day, Darlene saw the picture and said, “I guess we’re not doing that this year.” This moment pushed Marla to reach out to the Bombers to make sure their tradition continued.

“[the Bombers] made us feel like it was just as important to them, which makes it that much more special for us,” said Marla.

“We’ve been long-time Bombers fans and it just feels like family. They pushed that feeling to us through the Mother’s Day brunch,” Darlene added.

Darlene and her husband were season ticket holders in 1979 and are big Blue and Gold fans, so the family took her to their first Mother’s Day Brunch at IG Field in 2015, where the first photo of Buzz and Kylyn was taken.

“My daughter was just over one and started the brunch terrified of Buzz and Boomer,” said Marla with a laugh. “Buzz really dedicated himself to warm my daughter up to him.

“Probably an hour and a half into brunch, my daughter would finally touch Buzz and as soon as she made first contact, she wouldn’t let go. She walked around the brunch with Buzz… it was pretty adorable.” 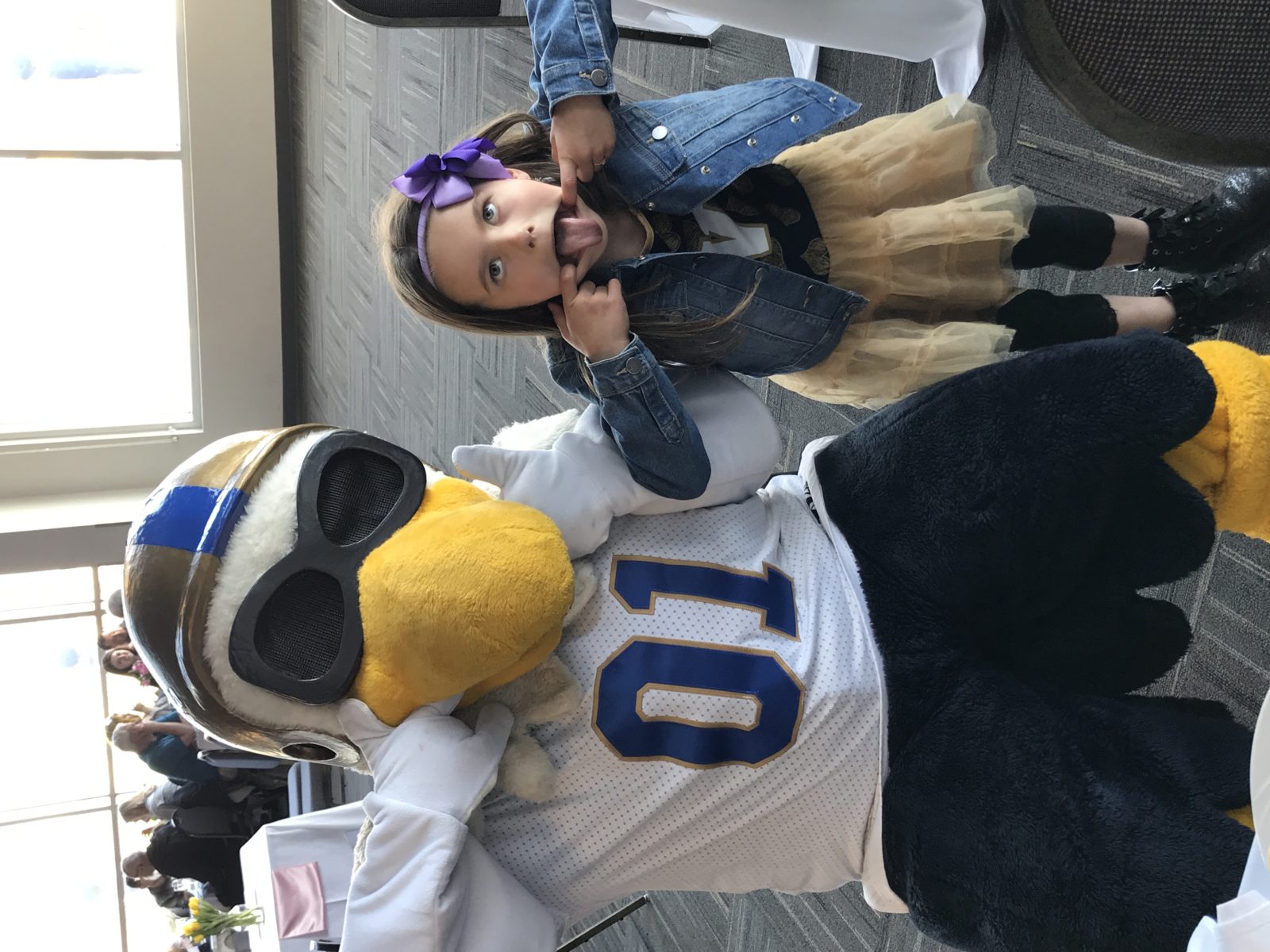 Buzz and Kylyn picked up right where they left off when the brunch came around the next year.

“Buzz was waiting for us to come,” said Darlene. “I remember my husband and I were there before the rest of the family and Buzz indicated to us ‘where’s the little one’, and I said, ‘she’s coming, she’s coming.’ Kylyn saw, and just ran to Buzz — a definite connection there.”

Marla is in awe of how strong of a connection her daughter has built with Buzz, especially since they communicate without words.

Year after year Marla would take the photo of Kylyn and Buzz walking through the concourse holding hands after the brunch. The bond between the two was so strong that Buzz came to Kylyn’s fourth birthday party. Buzz and Boomer walked in with her birthday cake to surprise her.

After the first brunch, Kylyn saw Buzz as a friend. So, whenever they were at a Bombers game or an event and Buzz was there, Kylyn was confused as to why Buzz wasn’t coming to see her.

“I just tell her that there’s too many kids here for him to give a personal hello to each and every one of you and he doesn’t want to make the other kids jealous by giving you attention,” said Marla with a laugh.

Marla said it’s nice to eat at the Bombers brunch, but it’s more important that they keep the photo tradition going, which is what they did when Buzz dropped by their house this Mother’s Day. After Buzz left, Marla and her brother, Trevor, cooked the family their own home cooked brunch.

Marla and Darlene see this tradition continuing as long as Buzz is around.

“We’re kind of suckers for tradition,” said Marla. “We’re going to have to start bribing Kylyn in her teens, so that she’ll keep holding the mascot’s hand while we walk out that door.”