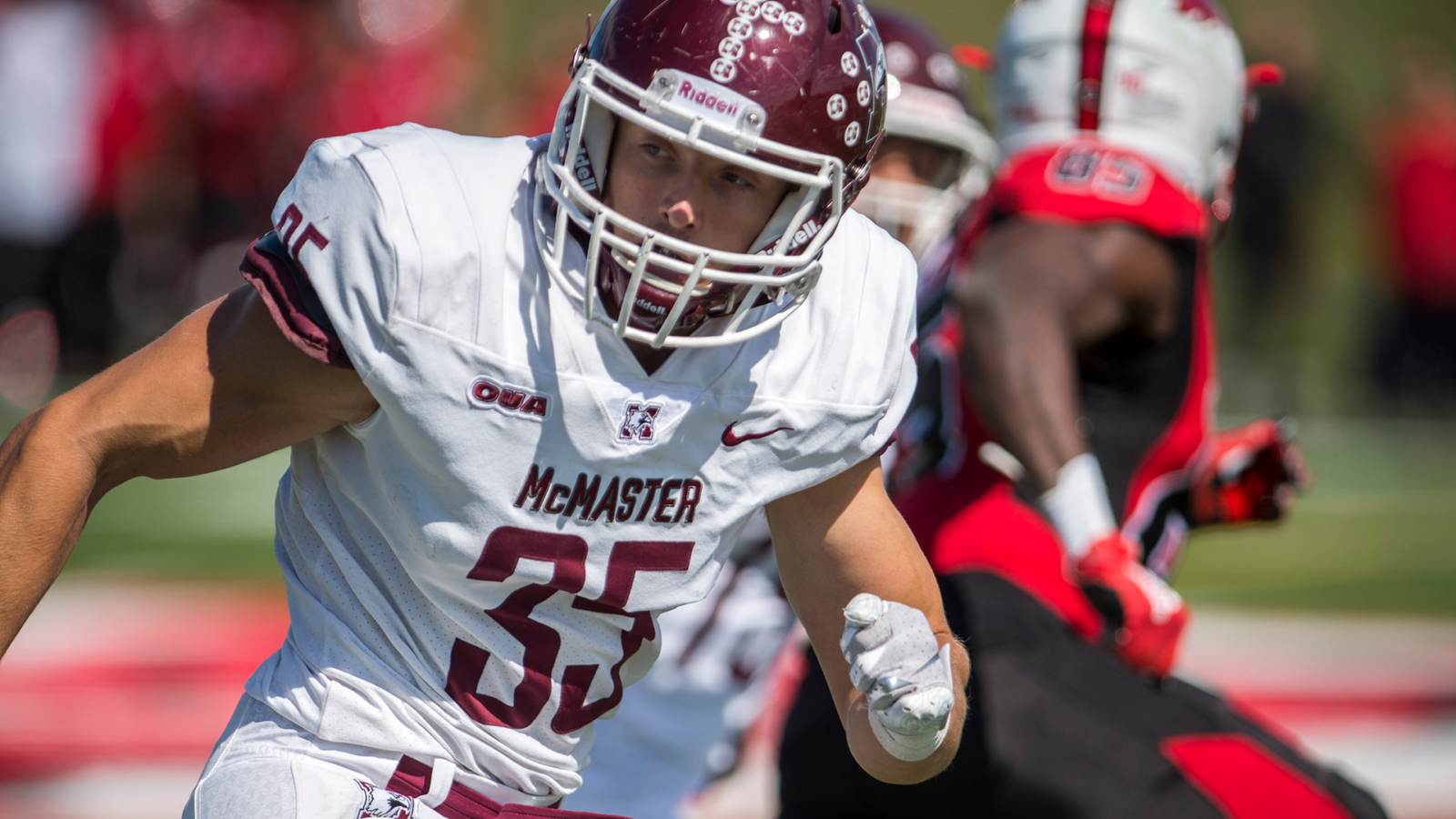 The Winnipeg Blue Bombers, like all their Canadian Football League rivals, are always sleuthing for some inside-intel on a draft prospect’s strengths, weaknesses and, perhaps, even their deepest, darkest secrets.

And who better to provide a true take on all that than a prospect’s older brother?

The Bombers used their first choice in the 2020 CFL Draft, 18th overall, to select McMaster defensive back Noah Hallett. And if that name sounds familiar, it should – his older brother Nick was a seventh-round pick by the club last year and an instant contributor on special teams.

Hallett, along with Bombers GM Kyle Walters, will speak to the media in a pair of conference calls Friday. Earlier this spring, not long after the CFL’s National Combine was cancelled because of COVID-19, Hallett did speak to CFL.ca and offered this self-scout:

“I’m definitely a gritty player. I really like hitting a lot. I really enjoy the game, and like studying film, studying opponents and getting to know their tendencies. It’s like a big chess game, but there’s a physical aspect to it.

“I’m pretty fast and it’s a bigger field so I think at free safety I can cover a lot of ground and make big hits when I need to.” 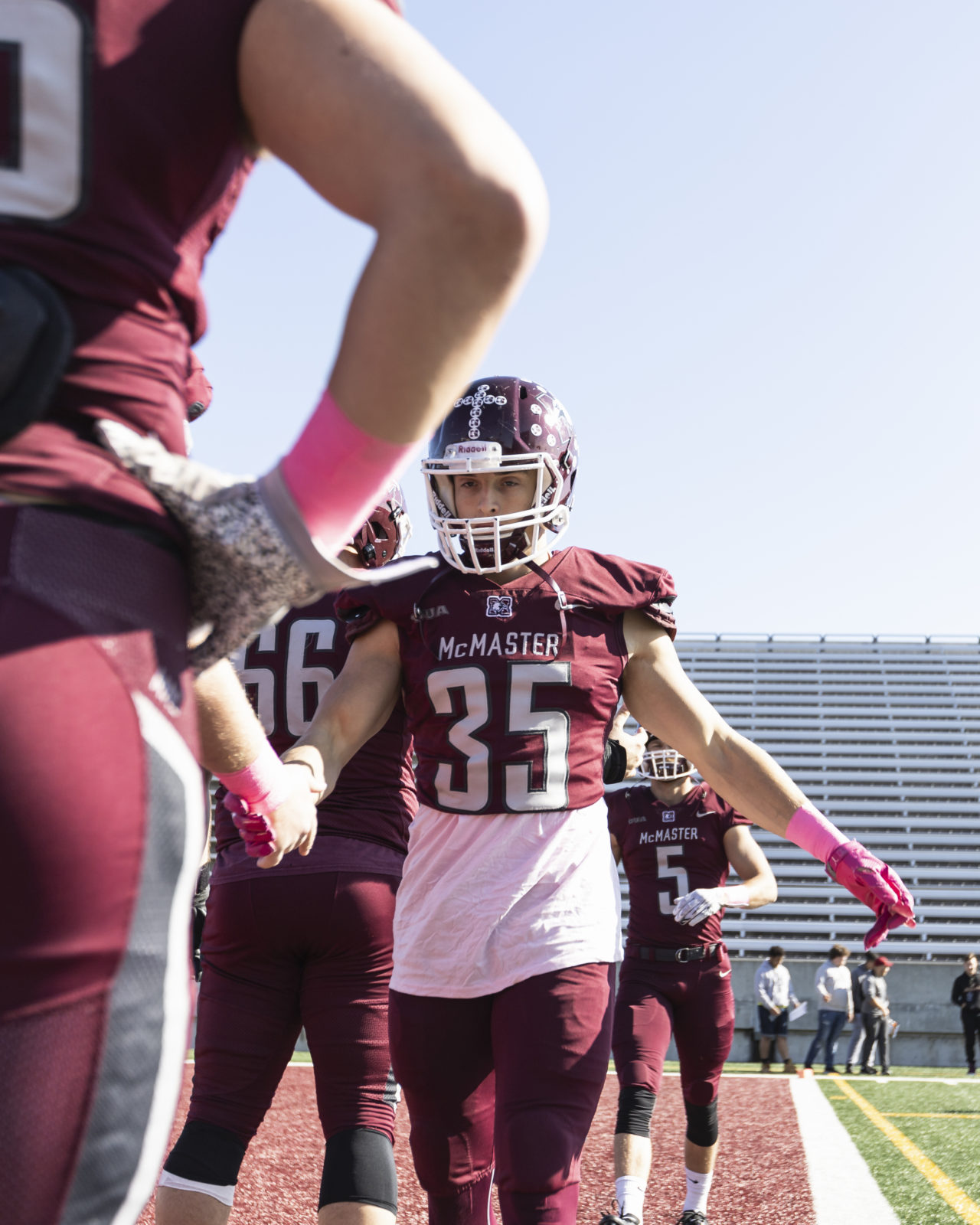 That’s an assessment that is spelled out in his stats, too, as Hallett registered 23 tackles, 13 assisted tackles, one sack, one tackle for a loss and four interceptions — second in the OUA conference and third in U Sports last season – while being named a U Sports 2nd-Team All-Canadian and OUA 1st-Team All-Star.

The Bombers second selection in the draft, Nevada receiver Brendan O’Leary-Orange, also has familial ties to the CFL. His father is former Toronto Argonaut/Hamilton Tiger-Cats running back Doyle Orange, who came north to Canada from Georgia in 1974 after being drafted in the sixth round by the Atlanta Falcons.

“The consensus on O’Leary-Orange is two things,” said CFL.ca draft analyst Marshall Ferguson. “Big body, can run very well. Extremely talented. Catches pretty much everything you can throw at him.

“And he got dinged at Nevada and that hurt his chances to really excel and cement himself at the top end of the draft.”

Both Hallett and O’Leary-Orange provide important Canadian depth pieces for the Grey Cup champion Bombers and the team’s final five picks in the draft did much the same. 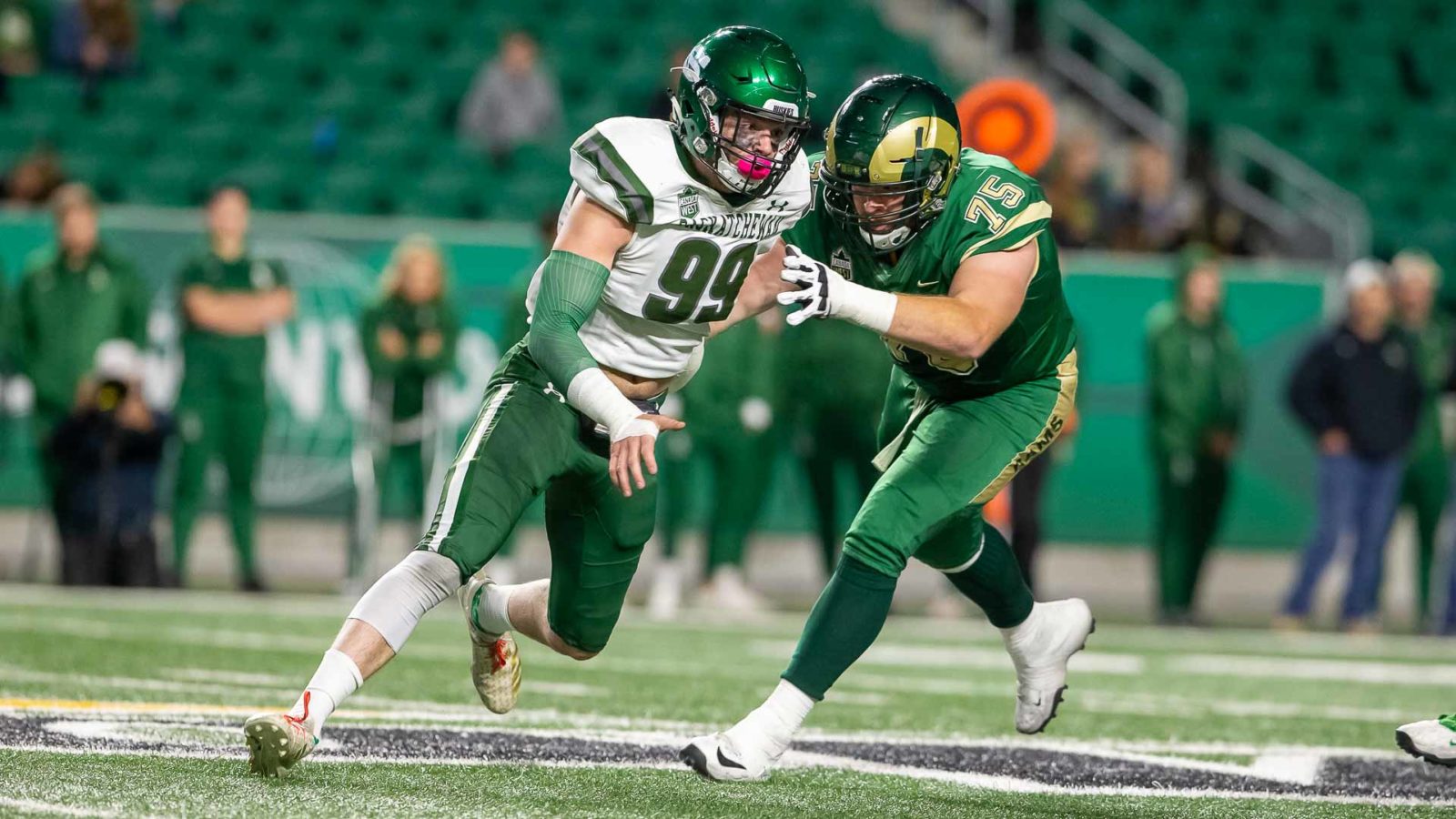 Walters will provide more detail on each pick on Friday, but in the meantime, here’s a look at the newest Bombers:

Notable: The younger brother of Nick Hallett, selected in the seventh round by the Bombers a year ago… Was a U Sports 2nd-Team All-Canadian and a OUA Sports 1st-Team All-Star in 2019… Picked up 23 tackles, 13 assisted tackles, one sack, one tackle for a loss and four interceptions, which was second in the conference and third in U Sports… Trained with Mike Daly, currently with the Ticats, whom he credits for inspiring him to become a professional athlete.

Why he’s a good fit for the Bombers: It’s cool that his older brother is on the squad, but the club needed to boost its Canadian talent on defence and Hallett also helps an area of need after the departure of Derek Jones to B.C. and with the team moving on from Jeff Hecht, Dondre Wright and Dexter Janke – all Canadian defensive backs.

Notable: Injuries limited him to seven games last year with the Wolf Pack and he finished the year with eight catches for 109 yards… Had seven starts for Nevada in 2018 and nine starts in 2017… His father is former Argo and Ticat RB Doyle Orange… Ran a 4.45 40 this spring.

Why he’s a good fit for the Bombers: The offence features two Canadian starters at receiver in Nic Demski and Drew Wolitarsky, and has Daniel Petermann and veteran Julian Feoli-Gudino behind them for depth. He’s got the body type to be a threat as a receiver but also provide the blocking aspect that is so valued in the Winnipeg offence from its pass catchers. 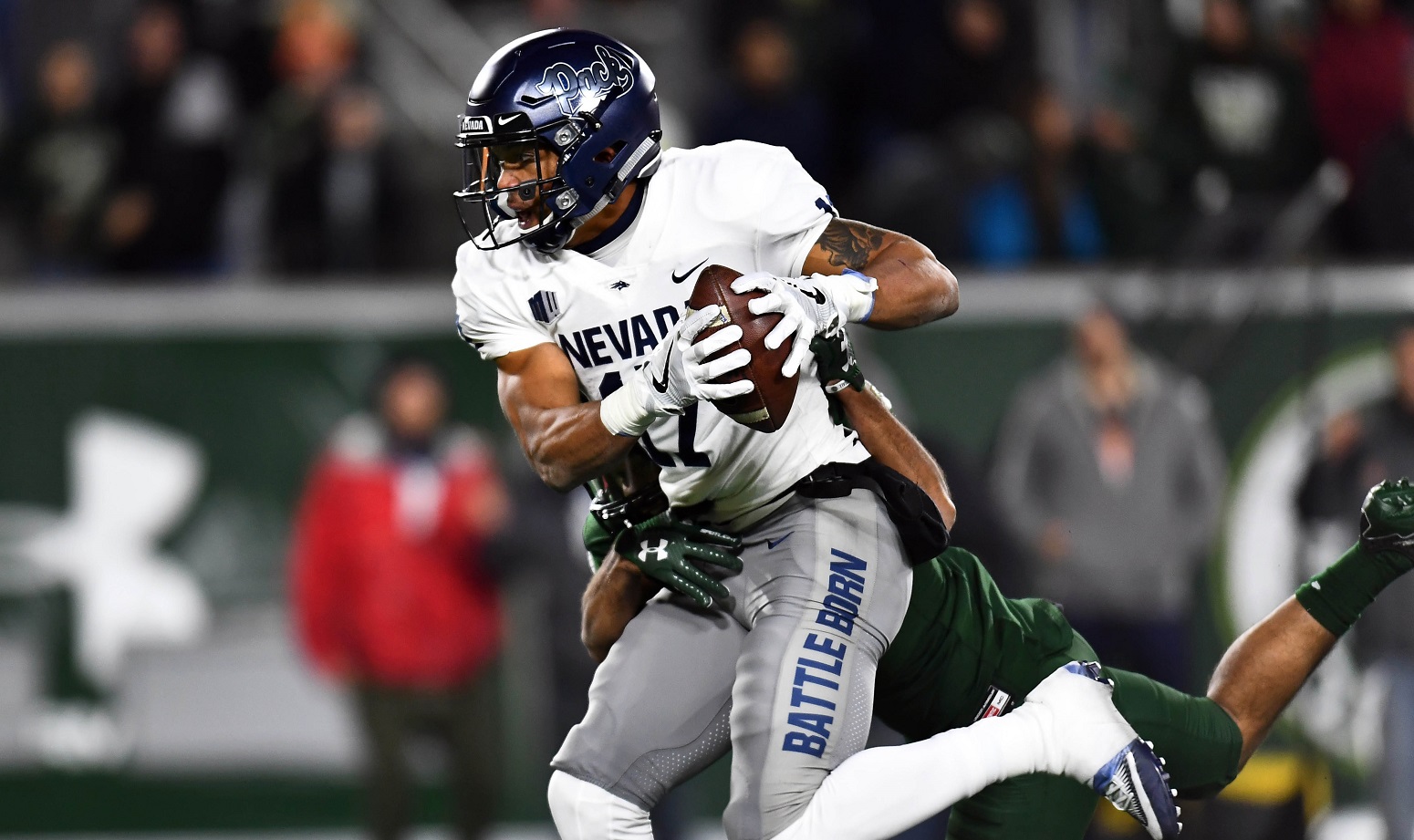 Notable: Connected on 92% of his field goals last year (22 of 24) with the Mustangs and averaged 47.5 yards per punt… Was a U Sports 1st-Team All-Canadian… An OUA All-Star in 2018 and a U Sports 2nd-Team All-Canadian as a punter. Ditto in 2017… He holds the U Sports record for most career field goals… Trained with Lirim Hajrullahu and Hank Ilesic.

Why he’s a good fit for the Bombers: It’s hard to imagine anyone unseating Justin Medlock any time soon, seeing as he is coming off a sensational season, including some fantastic work in the Grey Cup run. But Medlock is 36 and Liegghio has a chance to learn from one of the league’s all-time greats.

Notable: Began his U Sports career at Regina, in 2016, then spent 2018 with the Okanagan Sun before spending last year with the Huskies… Had 16 tackles, five sacks – second in Canada West – and 9.5 tackles for a loss, first in the conference, last year… Was a Canada West All-Star.

Why he’s a good fit for the Bombers: The Bombers lost DE Jonathan Kongbo to the San Francisco 49ers this offseason and Dheilly adds some depth behind Jake Thomas and Connor Griffiths, drafted last year by the club. 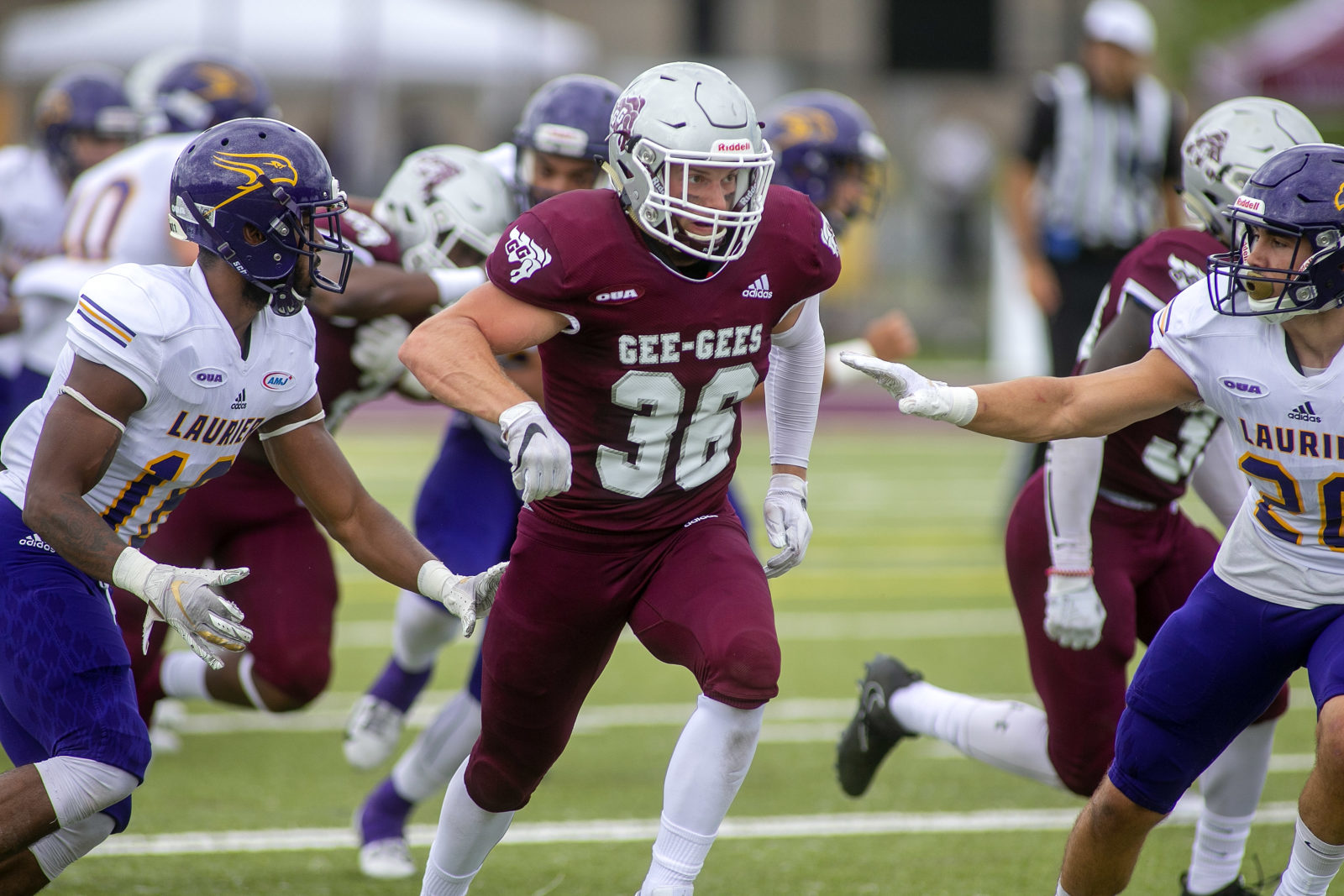 Notable: A OUA 2nd-Team All-Star in 2019 after appearing in eight games for the Gee-Gees… Finished with 28 tackles, one sack, 4.5 tackles for a loss, two forced fumbles an interception and three pass break-ups.

Why he’s a good fit for the Bombers: The Bombers like to stockpile their special teams with athletic Canadian linebackers and Rodger will be added to a crew that already features Shayne Gauthier, Jesse Briggs, Thomas Miles and Brandon Calver. Briggs is 30, Gauthier is 28 while Miles and Calver are 27. That provides an opportunity for younger blood.

Notable: Spent last year with the London Beefeaters of the Ontario Football Conference and was a CJFL all-star… Spent 2016-18 with the Wilfrid Laurier Golden Hawks.

Why he’s a good fit for the Bombers: See Rodger, above.

Why he’s a good fit for the Bombers: The scouting staff found gold at the back end of the 2019 draft, selecting both Nick Hallett and Kerfalla Exumé in the seventh and eighth rounds, respectively. Kambamba would be asked to find a similar role on special teams.