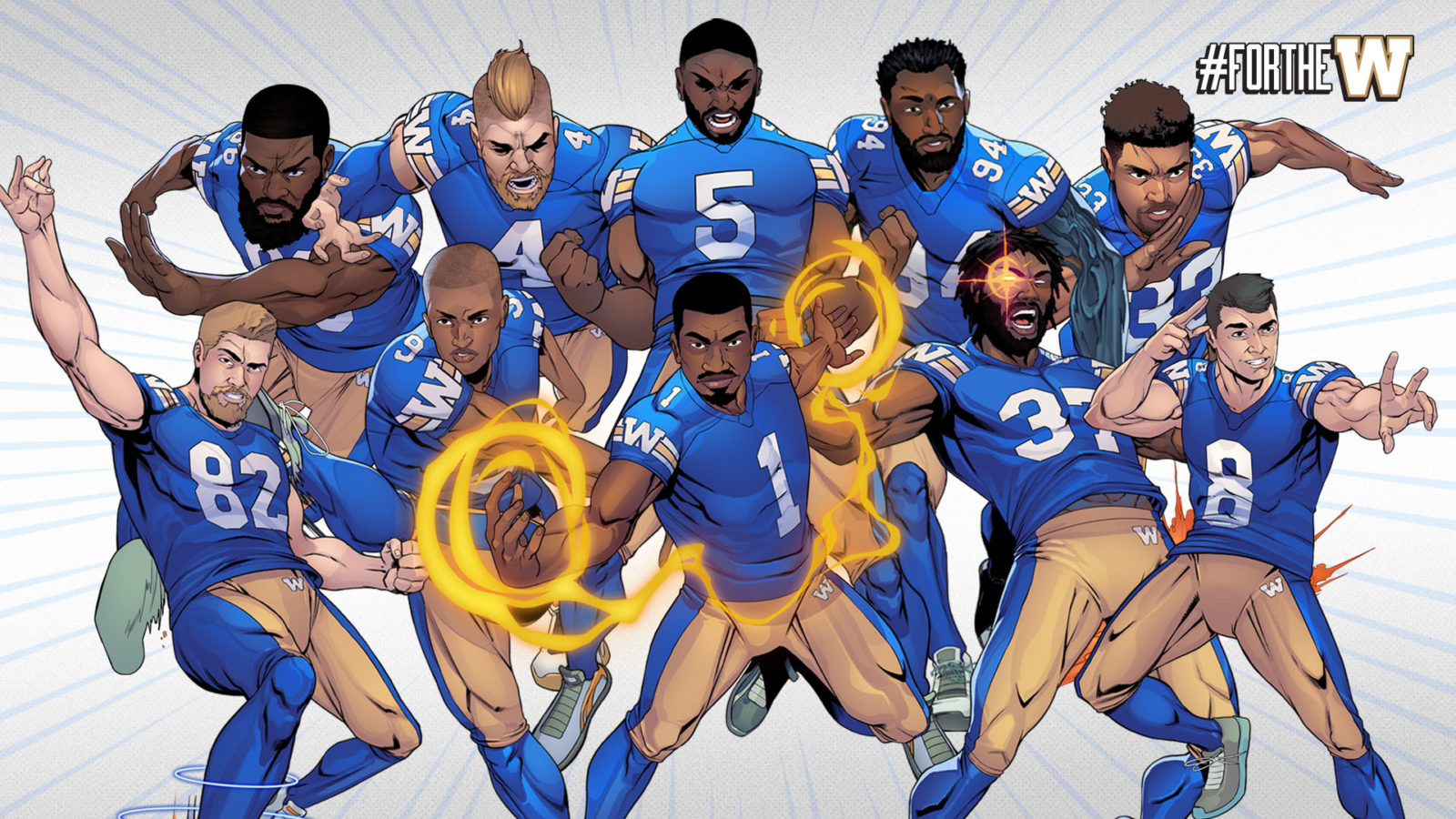 The scene: The Winnipeg Blue Bombers are engaged in another epic battle at IG Field, with their dastardly nemesis threatening to steal away a home victory.

In a pivotal moment, Adam Bighill enters his ‘Savage Mode’ to force a fumble, leading to Andrew Harris using his ability of ‘Kinetic Command’ to absorb hits and use that force to plow through tacklers for a go-ahead touchdown.

Seconds later and with the game still hanging in the balance, Brandon Alexander showcases his ‘Insight’ ability and steps in front of a pass – the throw rushed by Willie Jefferson’s ‘Menacing Aura’ – and the Bombers have once again thrilled their fans in another stellar adventure.

Yes, let it be said – there is staid and there is boring, vanilla and straightforward when it comes to the marketing campaigns used by professional sports teams. And then there is what the Blue Bombers unveiled today for their 2020 campaign – a bold, innovative celebration of the club’s 90 years morphed with comic book-styled superheroes named ‘Heroes of Champions Way.’

Partnering with Chicago-based Athlitacomics – the brainchild of former University of Manitoba Bison star and National Football League veteran Israel Idonije – the Bombers launched a creative and inspirational campaign that is unique to the Canadian Football League. 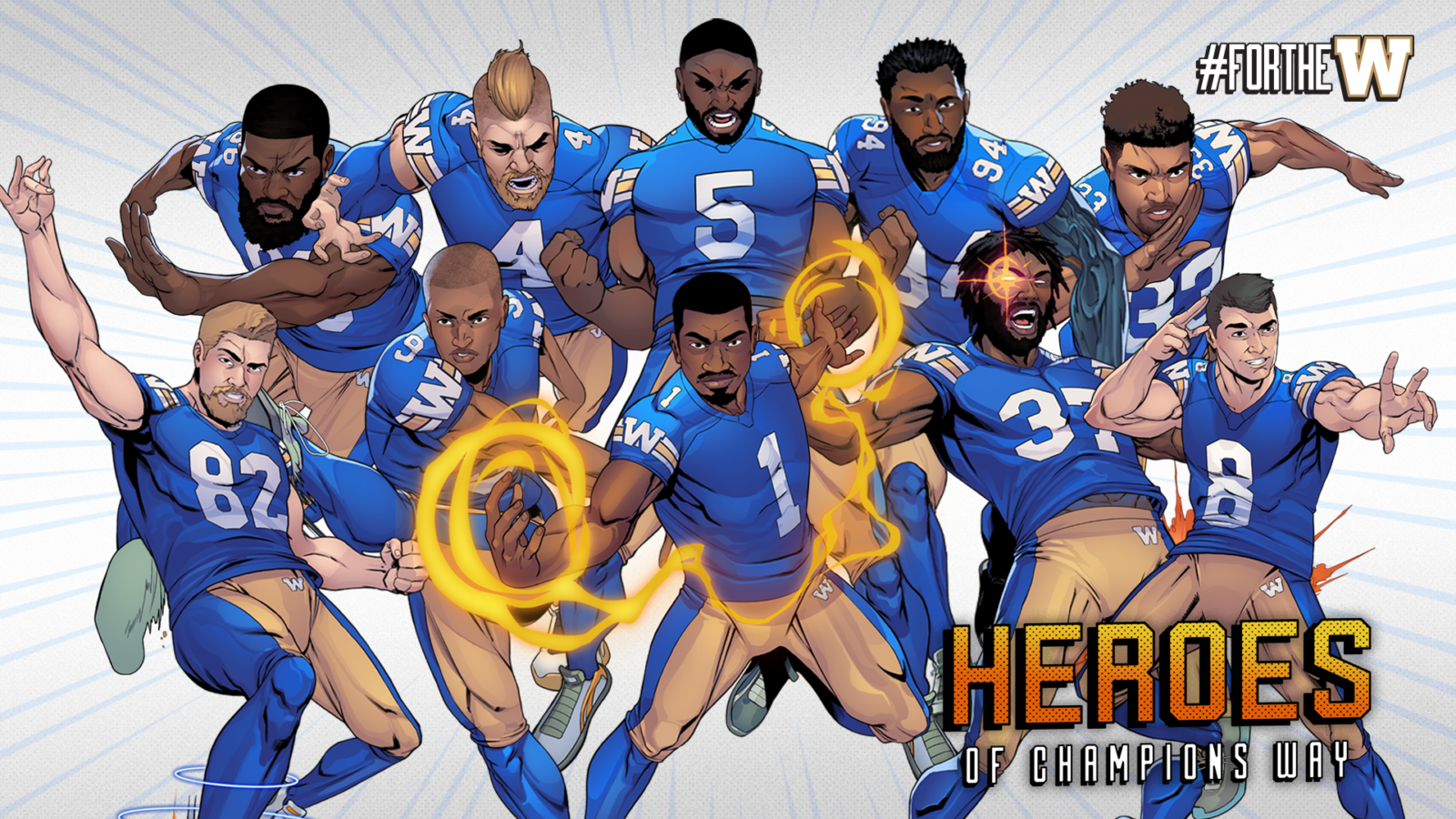 “We began talking last fall about what we wanted to do for this year’s campaign,” explained Rhéanne Marcoux, the Bombers’ Director of Creative & Content. “We were trying to find a way to find something different. Often what sports teams tend to do in anniversary seasons is pull out throwback photos and grainy old footage and reinforce the history of the franchise. That is important, but we really wanted to find something to connect with our younger audience who doesn’t have a connection with something that happened 90 years ago.

“This was a way for us to tie everything together and then when we won the Grey Cup in November, the concept became that much more perfect because we could tie that into our story. The plan is to celebrate our Grey Cup win this year at the same time we celebrate our 90th.”

The idea was first implemented by the Idonije’s Chicago Bears in their 2017 ‘Monsters of the Midway’ highly successful marketing campaign and builds on the comic-book theme. The premise sees the team’s superhero players get transported back in time upon touching the Grey Cup to battle foes over the team’s nine decades of existence dating back to 1930. As the season unfolds, the superheroes advance through each of the decades using their various superpowers in their quest to repeat as Grey Cup champions.

Each home game will focus on a specific player and decade with commemorative posters, billboards, digital advertisements and wallpapers all part of the marketing package. There will be a retail component as well, with T-shirts of the superheroes available in The Bomber Store.

“We brainstormed what would really make you stop in your tracks if you saw something on a billboard?” said Marcoux, who was also the creator of the Bombers’ highly-popular ‘For the ‘W’’ campaign. “This is going to be everywhere – on our videoboards in our stadium, on billboards, on all of our digital marketing and any of our marketing material.

“When you saw the ‘Monsters of the Midway’ campaign from the Bears, it really had a ‘Wow, that’s really cool!’ factor. And as the artists started sending us the renderings of our players, it just reinforced that four our ‘Heroes of Champions Way.’” 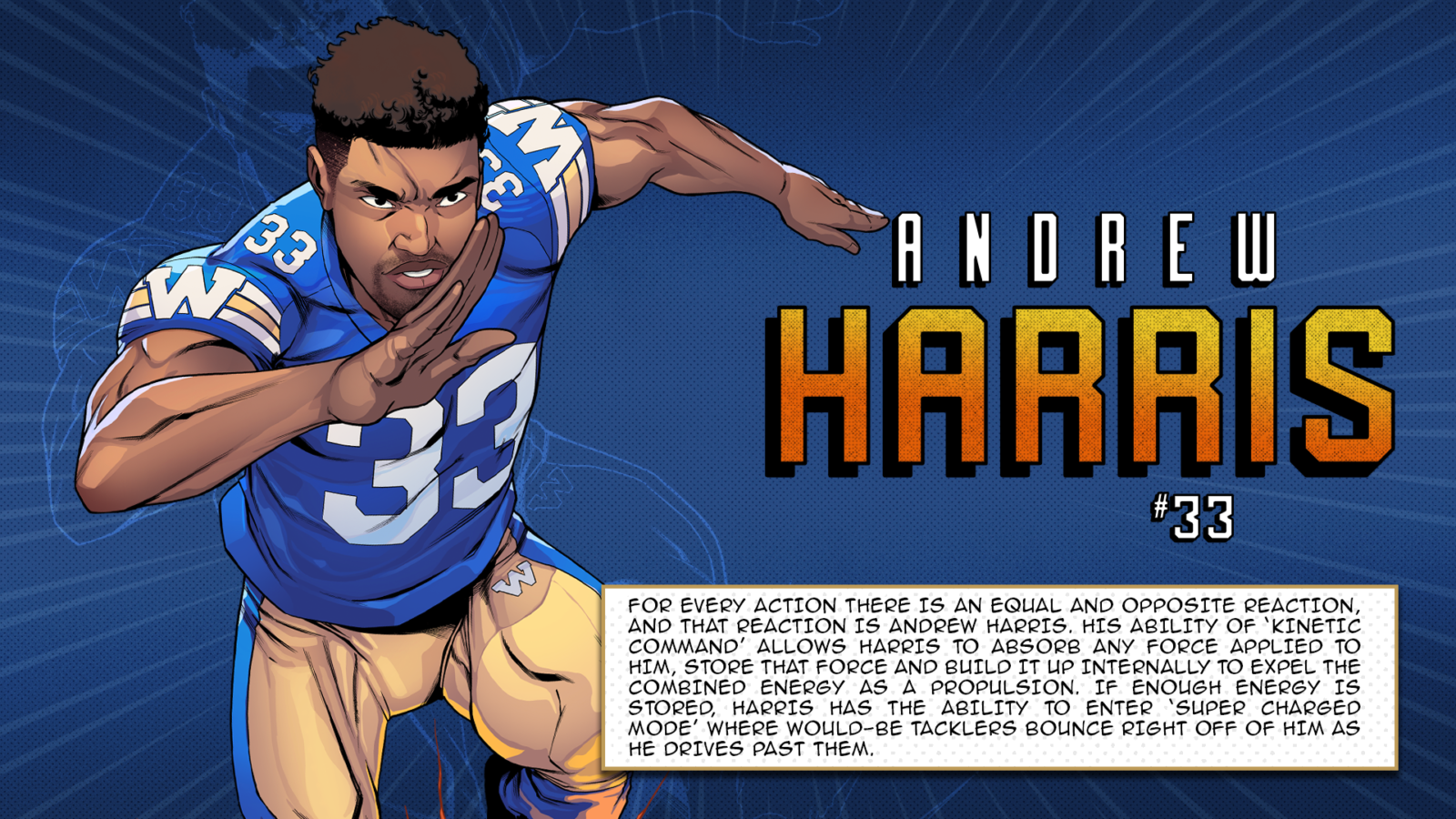 The 10 players and their superpowers, as detailed by the Bombers and the creators at Athlitacomics:

For every action there is an equal and opposite reaction, and that reaction is Andrew Harris. His ability of ‘Kinetic Command’ allows Harris to absorb any force applied to him, store that force and build it up internally to expel the combined energy as a propulsion. If enough energy is stored, Harris has the ability to enter ‘Super Charged Mode’ where would-be tacklers bounce right off of him as he drives past them.

In tune at all times, Drew Wolitarsky has the ability to disorient his opponents with his Vibrational Steps and shake his defenders. Every time his feet make contact with the ground, he emits a vibrational pitch. When he unlocks his maximum frequency, he can use the vibrations from his steps to increase his vertical leap, allowing him to make highlight reel catches.

Zach Collaros knows exactly what any defence is going to do at all times thanks to his ability to remember anything he sees once, giving him the ultimate edge in the film room before games. What makes Collaros’ power so exceptional is that as a true leader of the offence, he has the ability to telepathically link to his receivers and mentally show them where he needs them to be.

Always one to be in the right place at the right time, Brandon Alexander gains the upper hand via his ‘Insight’ ability. When Alexander locks eyes with an opponent, he can see what they’re going to do in the next 30 seconds. In extreme cases, Alexander can gain telekinetic control over the football after it is touched by whomever he is currently locked with.

There’s no moment too big for Adam Bighill. With the ability to increase his strength and speed as the pressure rises, he is able to lay critical hits and make plays when tensions are at their highest. At its peak, when the fans are cheering and the game is reaching a critical moment, Bighill will enter ‘Savage Mode’. Feeding off the energy generated by the moment and the fans, he becomes the ultimate super athlete with his strength reaching unmatchable levels. 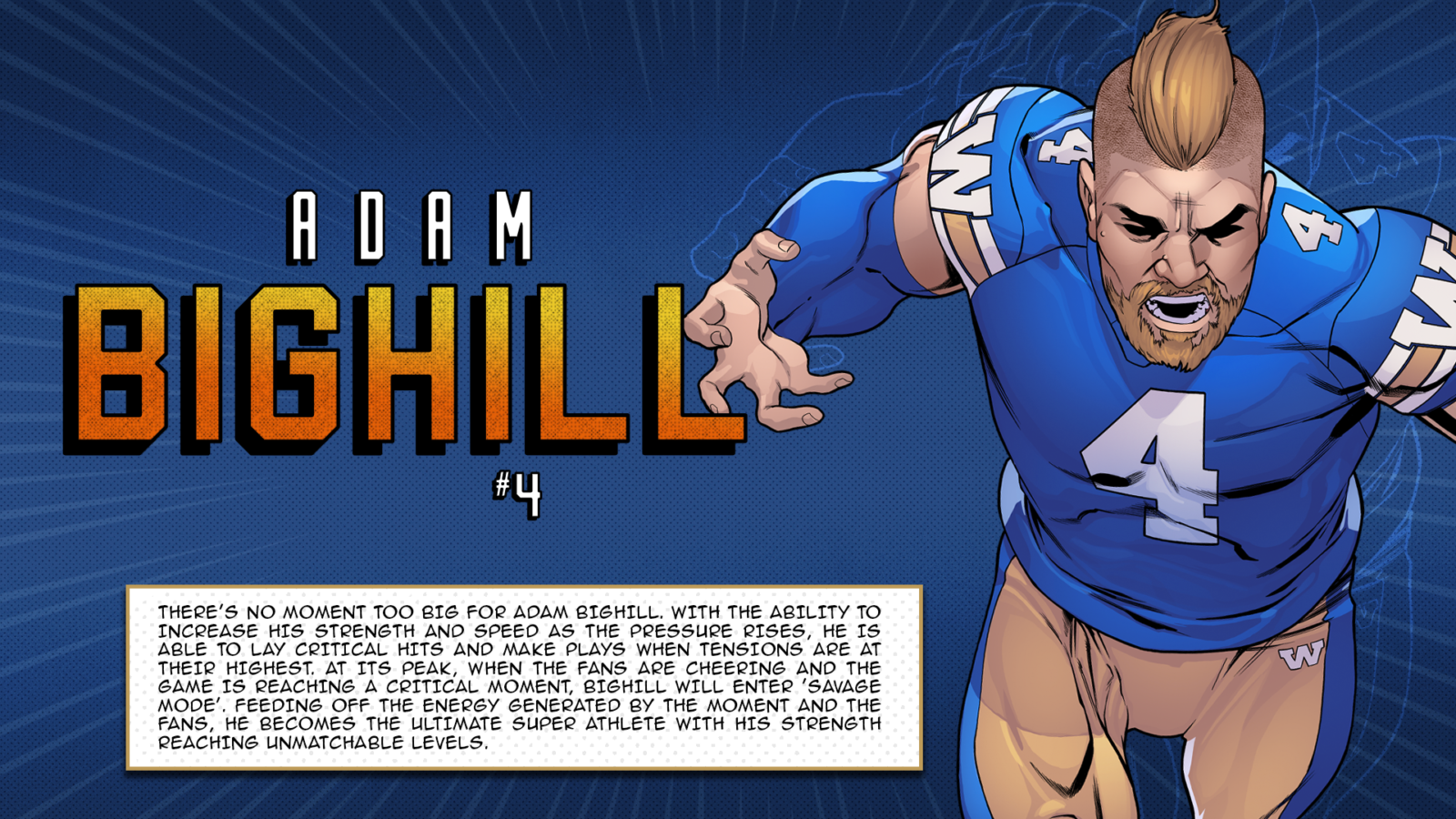 Known for making spectacular catches, Darvin Adams leaves fans breathless with his incredible hands. His ability, ‘Slight Hands’, is a combination of mystic arts and illusions, allowing him to apply misdirection and trickery to his route running and catching. Adams leaves defenders scratching their heads as he is often able to pull the ball in on a catch out of thin air.

Willie Jefferson’s ability to make his opponents fear him comes from his ‘Menacing Aura’ ability that allows him to regulate his power level to unfathomable heights, so that opponents who face him are crushed under mounting pressure. At full capacity, Jefferson has the ability to syphon his intimidation factor to the other members of the defensive line, making them a devastating force.

When he’s dialled-in, Justin Medlock often looks like he can’t miss — and with his ability ‘Locked On’, Medlock doesn’t. When he enters his ‘Locked On’ mode, he can focus on a singular point and drown out all surrounding noise, allowing him to hit field goals with uncanny precision. When he enters ‘Money Mode’, Medlock can calculate factors like wind, barometric pressure, and drag at incredible speeds to increase the probability of success.

Jackson Jeffcoat has the ability to manipulate parts of his body and turn his skin into carbon fibre, one of the strongest materials in the world. Ten times stronger than steel and lighter than aluminum, this makes Jeffcoat the perfect combination of agility and strength. When Jeffcoat enters ‘Full Carbon Mode’, his entire body takes on an elite durability, becoming virtually unstoppable.

As an O-lineman, Stanley Bryant has to protect the QB. His ability to control the density of his body without sacrificing his ability to move helps him do just that. By controlling his body at a cellular level, Bryant can turn himself into an immovable force and can manipulate his cells to heal at a rapid pace, ensuring he is always healthy when it’s game time. At max dominance, Bryant can increase his perceived weight to 1,000 tons and increase his physical size to make him an imposing immovable object. 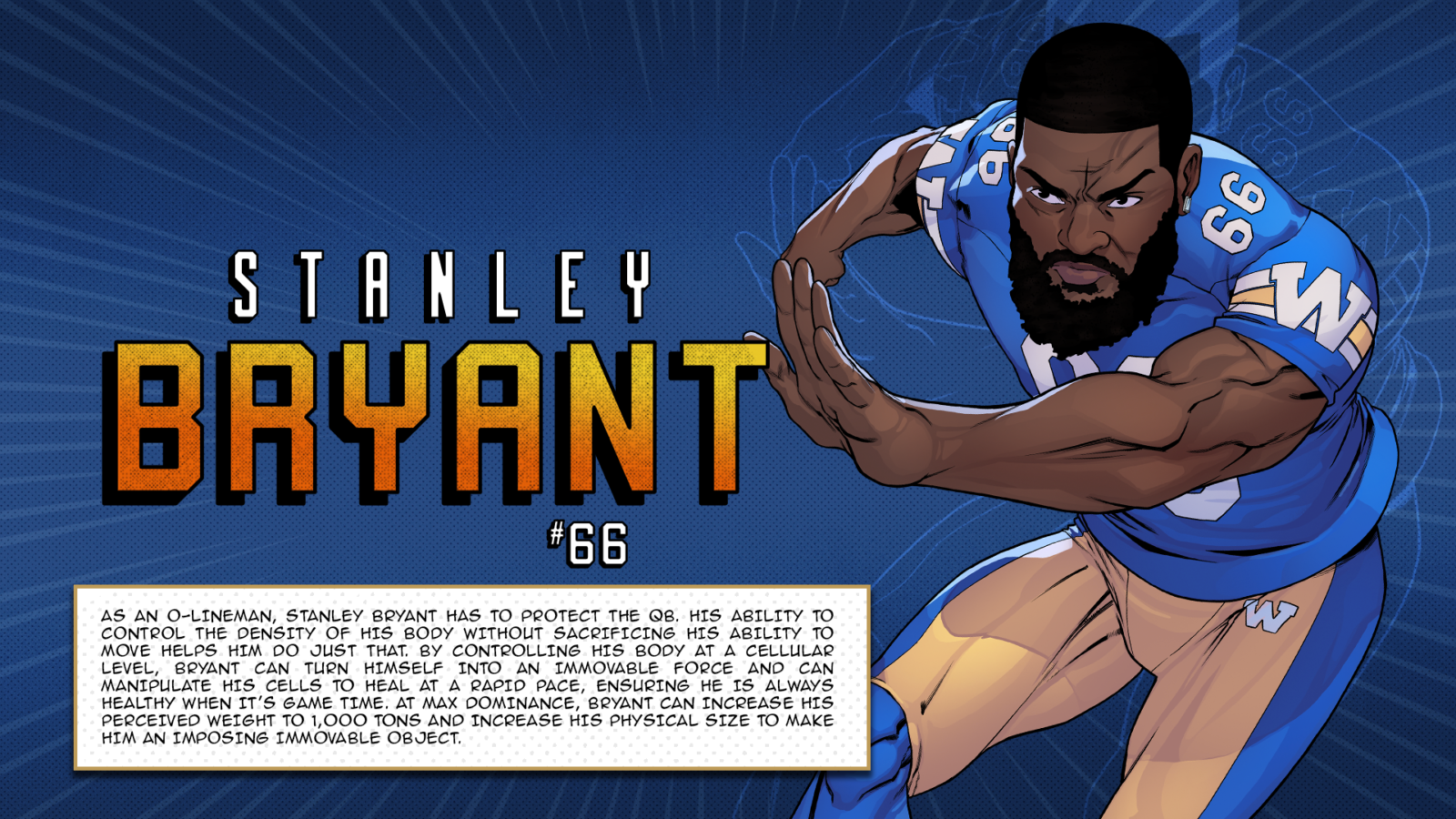 Idonije had hoped to be in Winnipeg for the launch of the campaign, but that was postponed due to the Coronavirus pandemic.

“The minute I can be there,” he said, “I will be on the first plane. It’s been a privilege to be partnered with the Bombers.”

Interestingly, the Bears’ ‘Monsters of the Midway’ campaign has been so successful the club is still using it in much of their marketing. The Bombers believe that their campaign will have that kind of lasting power as well, and the story can evolve in the years ahead.

“We really wanted to do something different that could stand out and this is something that hasn’t been done in the CFL yet, or many leagues for that matter,” said Marcoux. “It’s fun. It’s distinctive, and the more we discussed this it became clear that our players are our modern-day heroes.

“So many of our players are returning after the Grey Cup win and this gives us the chance to celebrate our current heroes on the field while also giving a nod to our past superheroes that came before.”

There’s a little superhero in all of us and the Bombers, in partnership with Athlitacomics, want to hear your story.

We’re asking our fans to submit the uplifting stories of the everyday heroes who are stepping up during this critical time, from doctors, nurses and healthcare workers, to first responders, police, firefighters and grocery-store workers – anyone who is working on the frontlines so diligently during the COVID-19 pandemic to help us all. We want to hear all about our real-life heroes, and we’re asking fans to use the hashtag #HeroesForTheW on social media.

We’ll then select three stories to be transformed into superheroes as part of the Heroes of Champions Way campaign. 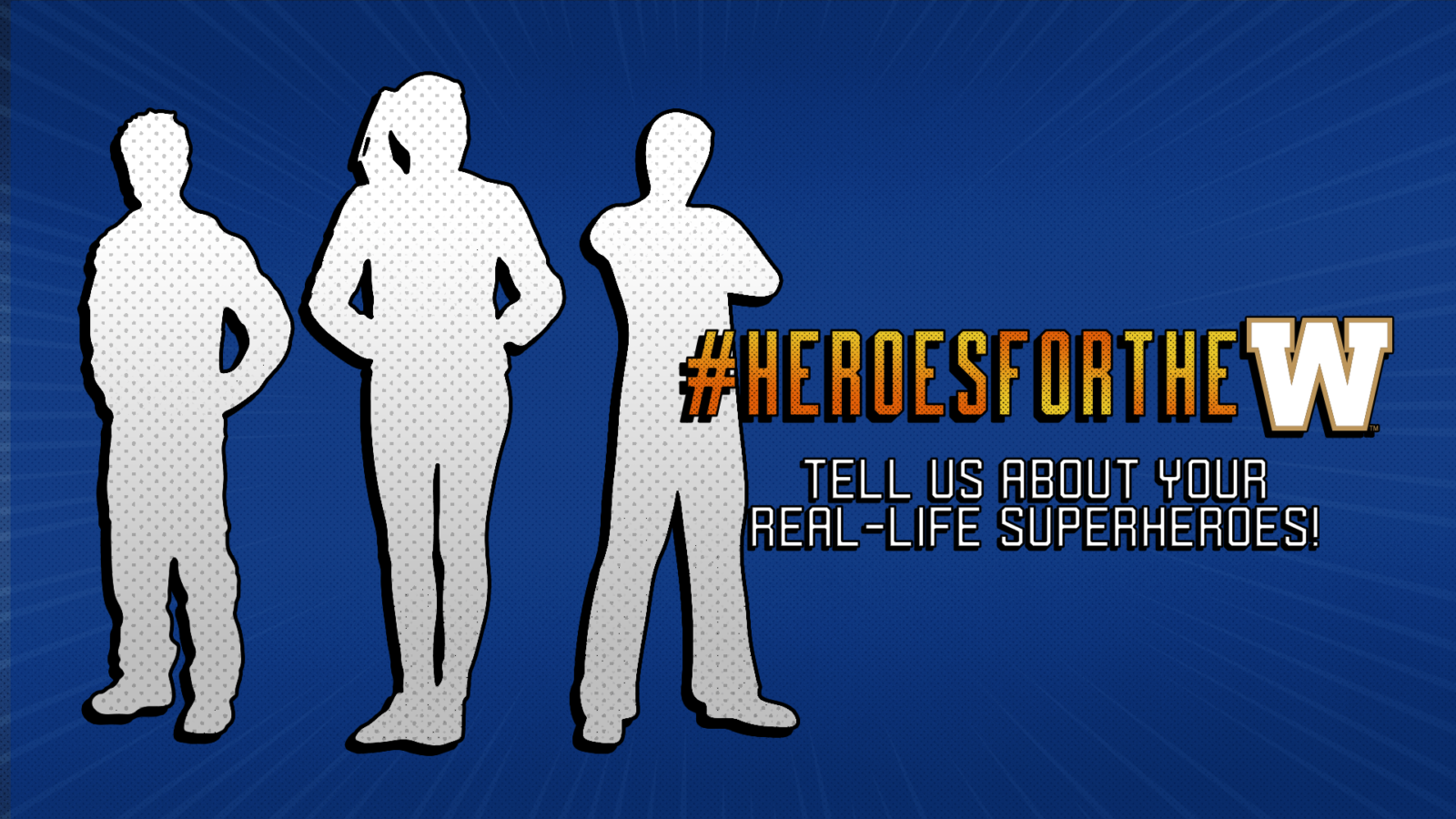