Year in Review | Getting Into the Big Dance 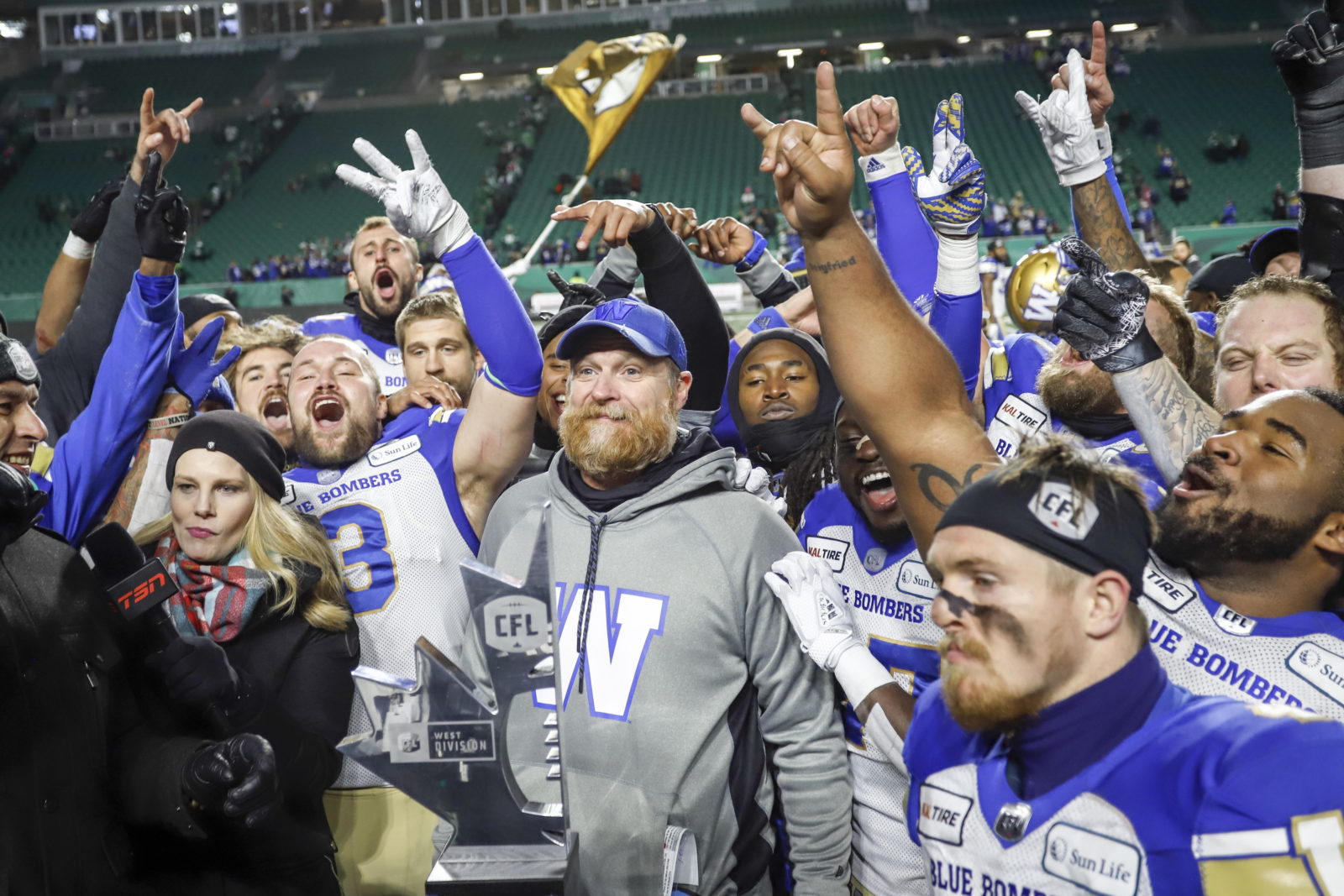 Year in Review | Getting Into the Big Dance

There will be arguments, no doubt, from the folks in Edmonton and Calgary. And a case could certainly be made in Hamilton and Toronto for the battles over time between those two iconic franchises.

But it says right here no rivalry in the Canadian Football League is more crazed, features more intensity, and has more fans paying attention than the Winnipeg Blue Bombers vs. the Saskatchewan Roughriders.

It’s absolutely nuts even in the preseason, it’s positively crazy on Labour Day weekend and beyond bonkers at the Banjo Bowl.

So, line these two prairie rivals up across from each other with a berth in the Grey Cup at stake and, well, it’s the Labour Day Classic and the Banjo Bowl times a zillion.

That 2019 Western Final matchup – and all the juicy subplots and storylines that came along with it – slots in at #2 on our Top 10 list of Bombers stories of the year.

The Bombers, fresh from their Western Semi-Final victory over the Calgary Stampeders, had certainly built some momentum heading into the division final. But the Riders had also taken two of three meetings between the clubs during the regular season, were 13-5 overall and a solid 8-1 at Mosaic Stadium. 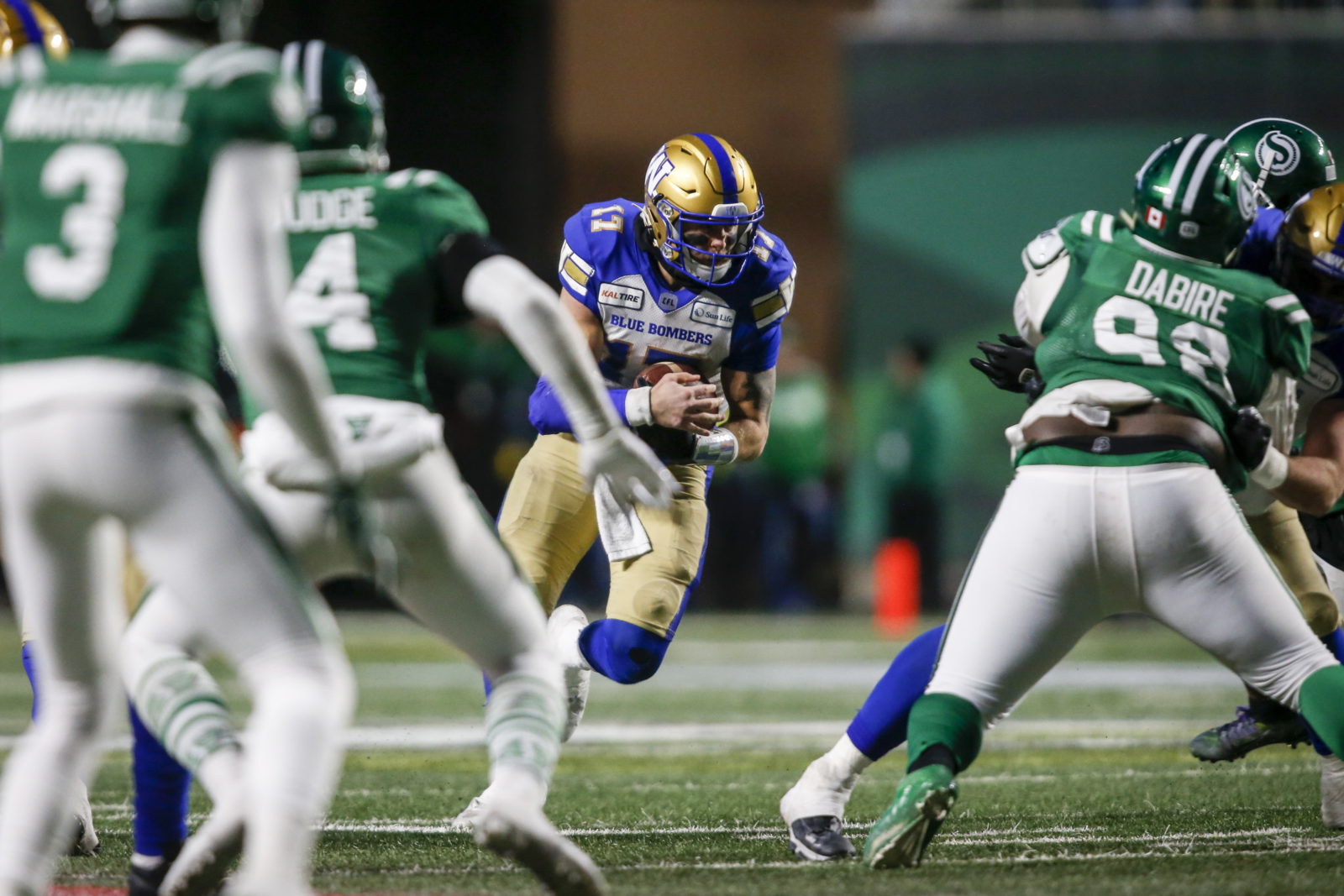 Winnipeg’s 20-13 victory became an instant CFL playoff classic, courtesy of some spectacular offensive plays, a moment or two on special teams and some dynamic work by the Bombers defence in a what was a perfect advertisement for everything that makes the three-down game so spectacular.

First and foremost, the victory sent the Bombers to the Grey Cup for the first time since 2011 and led to the blue and gold bandwagon being swamped by supporters.

“We’re going to the Cup and it’s a great feeling,” said Andrew Harris inside a raucous Bombers dressing room at Mosaic Stadium after the game. “We can’t get too high, though. We’ve got to stay locked in because we’ve got a great team we’ve got to go out and beat next week.

The Bombers had built a 20-10 lead halfway through the fourth quarter, courtesy of four Justin Medlock field goals and a Zach Collaros-to-Kenny Lawler TD. But the Riders, led by quarterback Cody Fajardo – who was bravely playing through an oblique injury that affected his every moment – simply would not surrender.

Winnipeg’s defence twice made goal-line stands in the final minutes, and still needed a Fajardo pass attempt on the last play to clang off the crossbar to seal the victory. 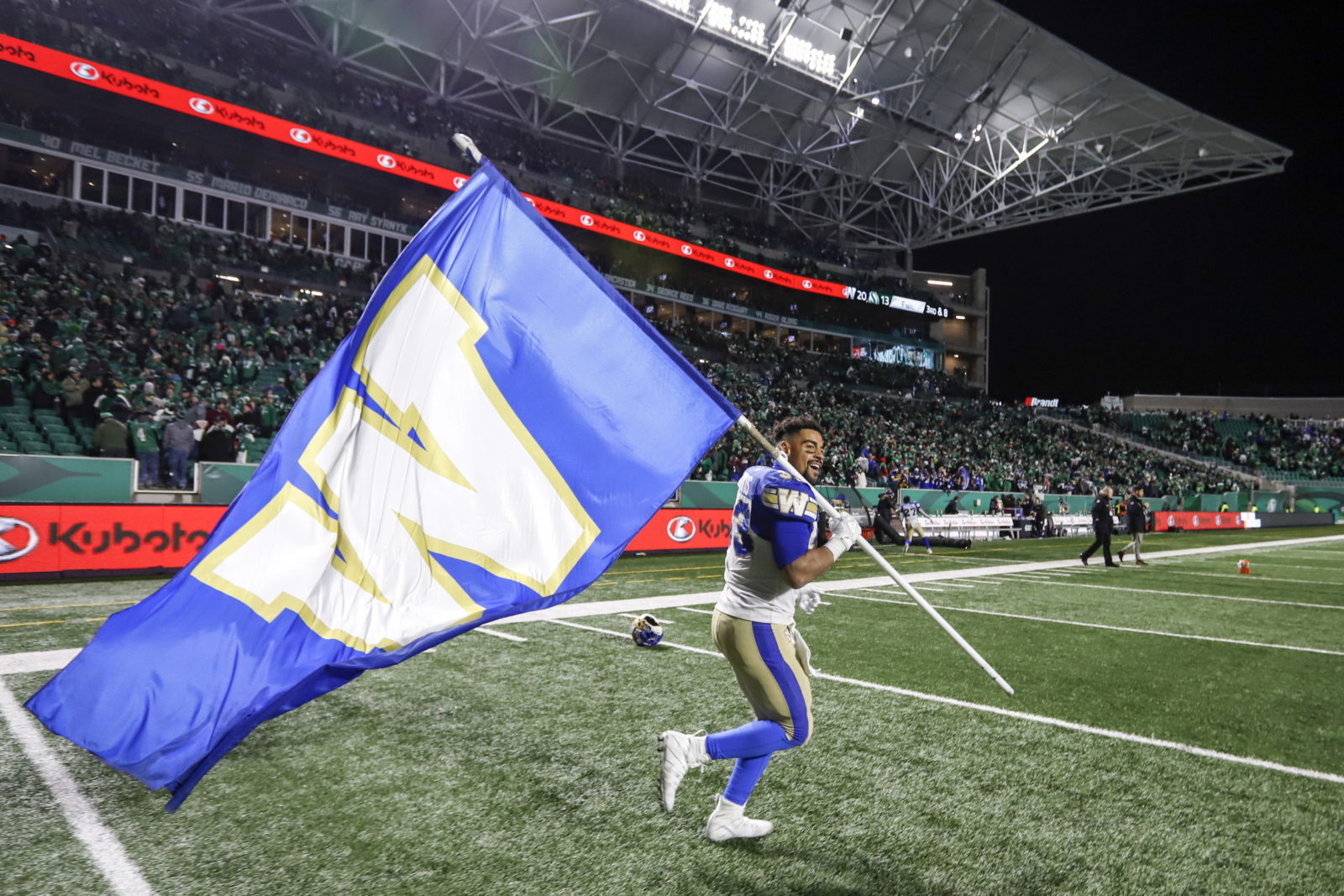 “I was playing peek-a-boo for that last three minutes,” said Nic Demski. “I kept putting my hands over my eyes. That was probably the longest three minutes of my life, man. Our defence came up big and I just can’t say enough good things about them.”

It was a game in which the Bombers got big-play work from all over their roster. There was Jonathan Kongbo stuffing Riders short-yardage specialist Bryan Bennett near the goal line. There was Justin Medlock, ho-hum, connecting on another four field goals.

And then there was a foot soldier like Shayne Gauthier tracking down Nick Marshall on a brilliant piece of deception on a punt return to save a potential touchdown late in the game.

And in a season filled with dramatic highs and lows it seemed only fitting that Collaros – traded by the Riders to Toronto, who then moved him to Winnipeg at the deadline – would then come back to Regina to haunt his old squad.

“Coach said something early in the week that really struck me… As a rookie I was fortunate enough to be on a team he was coaching in Toronto that won the Grey Cup,” Collaros said after the game. “Two years later I was able to play in one in Hamilton, so my first three years I was like, ‘Oh, I’m going to be able to do this every other year.’

“Not everybody gets to do that. It’s a precious thing.”

Collaros and the Bombers, as we all know, would have one more riveting chapter to write a week later – back in Calgary – in the 107th Grey Cup.

This is the ninth in a series recapping the Top 10 Bomber stories of 2019.
Next: #1 – THE GREY CUP VICTORY AND CELEBRATION

Previously:
#3 – SLAYING A DRAGON IN CALGARY
#4 – ANDREW HARRIS: DISAPPOINTMENT AND GLORY
#5 – C’MON DOWN TO WINNIPEG, WILLIE
#6 – THE COLLAROS TRADE: UNEARTHING GOLD AT THE DEADLINE
#7 – STABILITY… AND CHANGE
#8 – ADVERSITY HITS
#9 – BURSTING OUT OF THE STARTING BLOCKS
#10 – RELOADING AFTER 2018