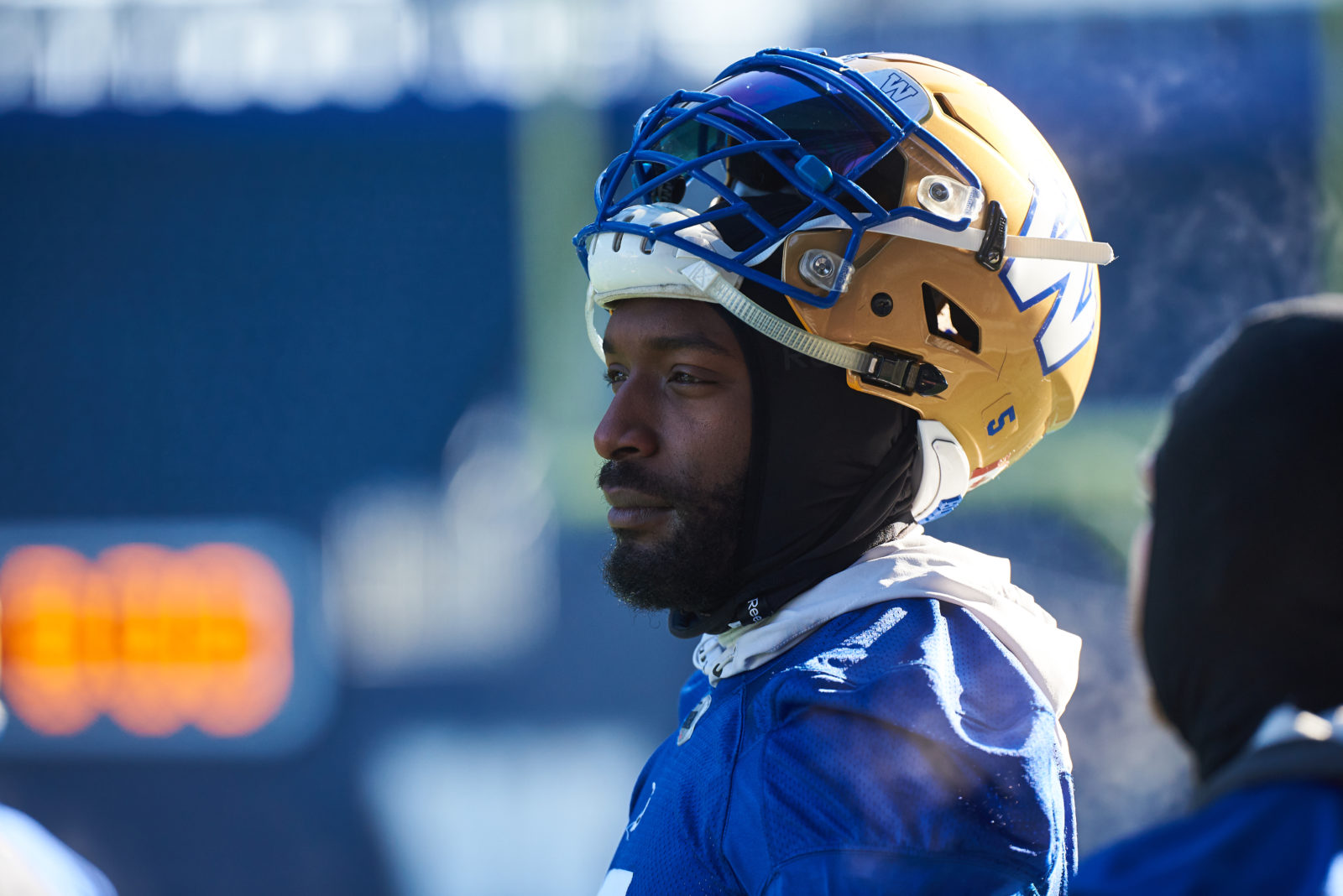 Brandon Alexander took a moment to survey the scene inside the Winnipeg Blue Bombers locker room. Equipment bags were being stuffed with gear in preparation for Sunday’s Western Semi-Final in Calgary against the Stampeders and voices had to be raised to be heard above the sounds of playoff excitement.

Asked to take the temperature of the Bombers’ room and offer a sense of the vibe with this squad, the Bombers safety shrugged and then offered an honest and straightforward answer.

“It’s win or go home now. There’s no sense sugar-coating it or coming up with another answer,” began Alexander. “You win, or you go home. And everybody in here is ready to go.”

The Bombers and Stamps met three times this season – back-to-back to end Winnipeg’s regular season – with the guys in blue and gold winning twice. The matchups featured five different starting quarterbacks in Matt Nichols, Chris Streveler and Zach Collaros for the Bombers, and Nick Arbuckle and Bo Levi Mitchell for the Stamps. 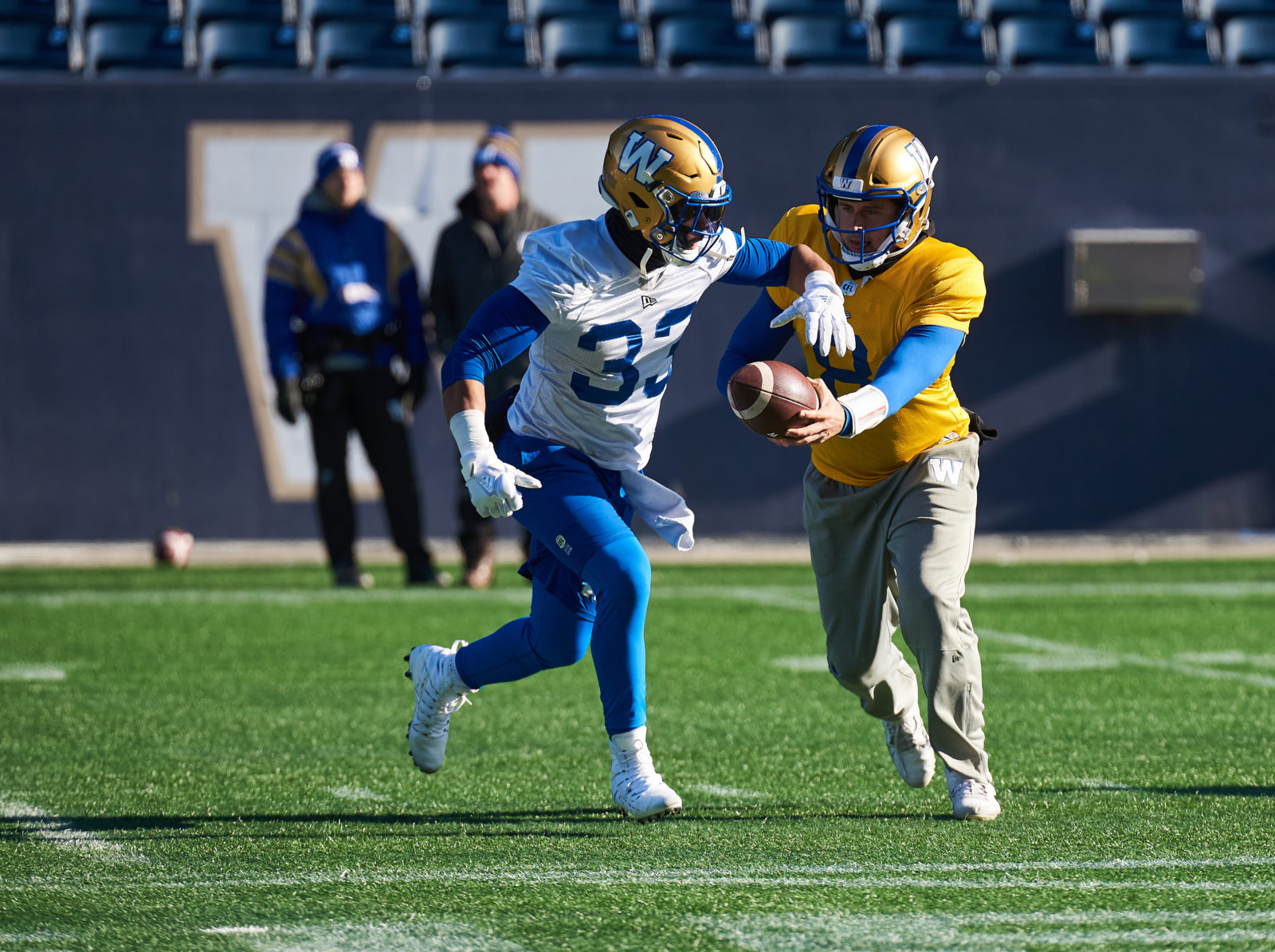 And those three games were decided by a grand total of eight points, teasing everyone at the possibilities for Sunday’s sudden victory/sudden death semi-final.

“It’s two really, really good teams playing each other,” said Alexander. “But now the mistakes are more heightened, there’s more awareness going on out there, your body feels different and you know any given play at any time could be the play where you go home or continue on to the next round.

“We still take it the same as one game at a time, but now you don’t have a second chance. If you go out and mess up that play, that play you can’t get back and that play can determine whether you win or not. There are five or six plays a game that could go either way and could determine the outcome. We don’t know when those five plays could come… they could be five in a row, they could be in the middle, they could be at the beginning.

“We just have to go out there and play Bombers football. Play our game and everything will be fine.”

The Bombers rocketed out to a 5-0 start and were 9-3 at the two-thirds mark of the season before slumping in a 2-4 finish. But it was the regular season finale victory over the Stampeders – with Collaros at the controls – that seems to have sparked this bunch at just the right time.

“When he walked into the huddle, walked into the stadium, you could just tell he was a pro right away before he even hit the field,” said slotback Nic Demski. “And when he hit the field he was making reads and giving his two cents of what he sees out there. That goes a long way. Having Matt (Nichols) around here with his veteran status, having Zach, another guy who has had a lot of success in this league and his veteran status… you can just tell they’re both smart quarterbacks, they’re both very high I.Q. football players. He’s added a lot of good things to our locker room.” 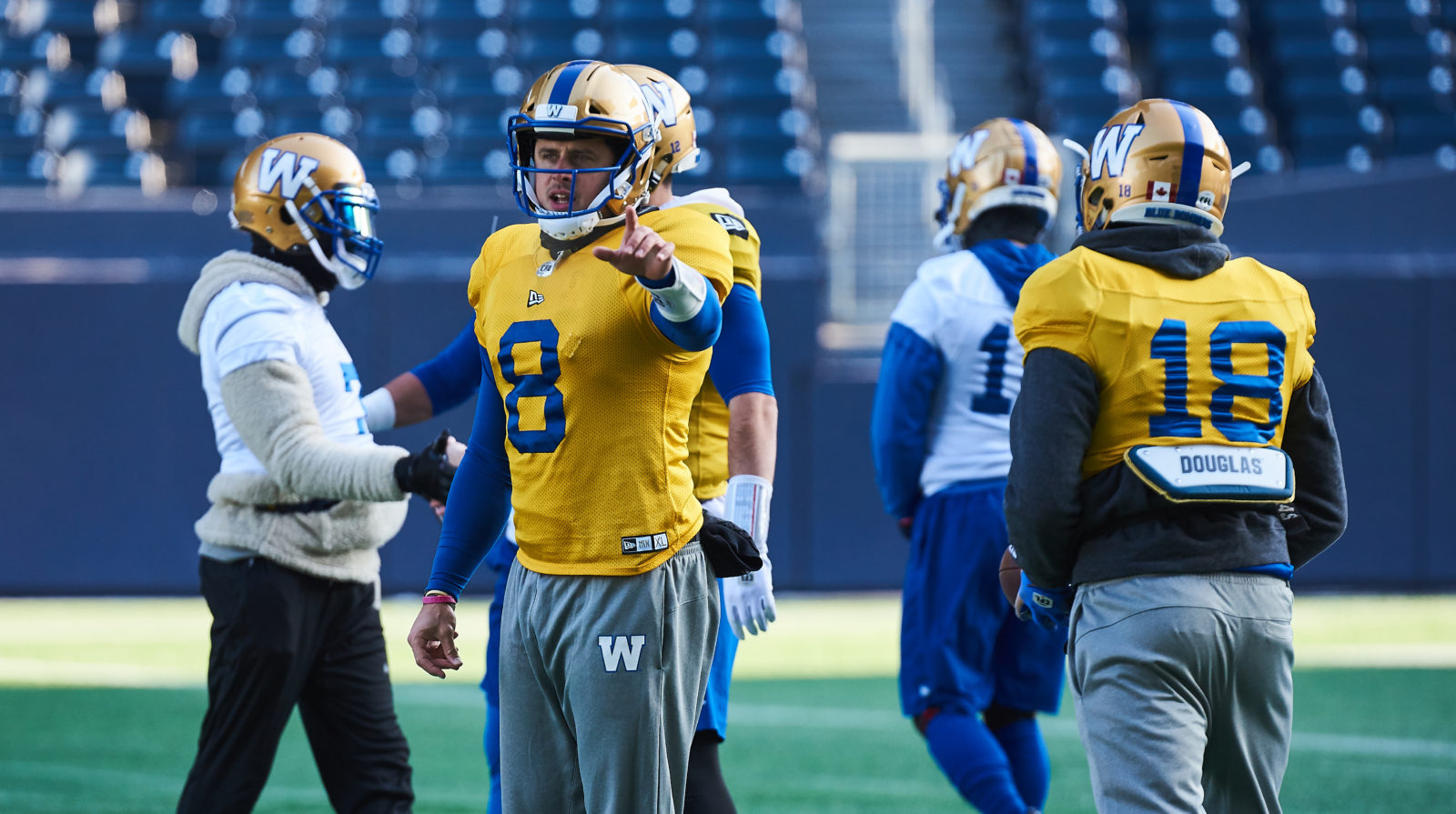 “I think we’re a confident bunch,” added Collaros after practice Friday. “I don’ think you make it to this point and have the record these guys have had this season, the previous seasons, without being a confident group.

“That confidence comes from preparation and they take that stuff very seriously, the players and coaches. We feel prepared. It’s going to be an exciting one.”

Now, change is inevitable with every team in every offseason. The Bombers are no different with quarterbacks Collaros, Nichols and Chris Streveler all pending free agents. Ditto for Willie Jefferson, Stanley Bryant and others. And head coach Mike O’Shea is also working on an expiring contract.

That subject was broached during O’Shea’s media session on Friday.

“These guys understand that there’s nothing about tomorrow that’s guaranteed,” said the Bombers boss. “So, part of the beauty of this is being able to live in the moment and harness that idea and harness those facts and, even for the guys who can’t play, contribute as best you can because they still want to win.

“And for the guys that are out there, once again, honour your teammates by your play – especially for the ones who can’t play.” 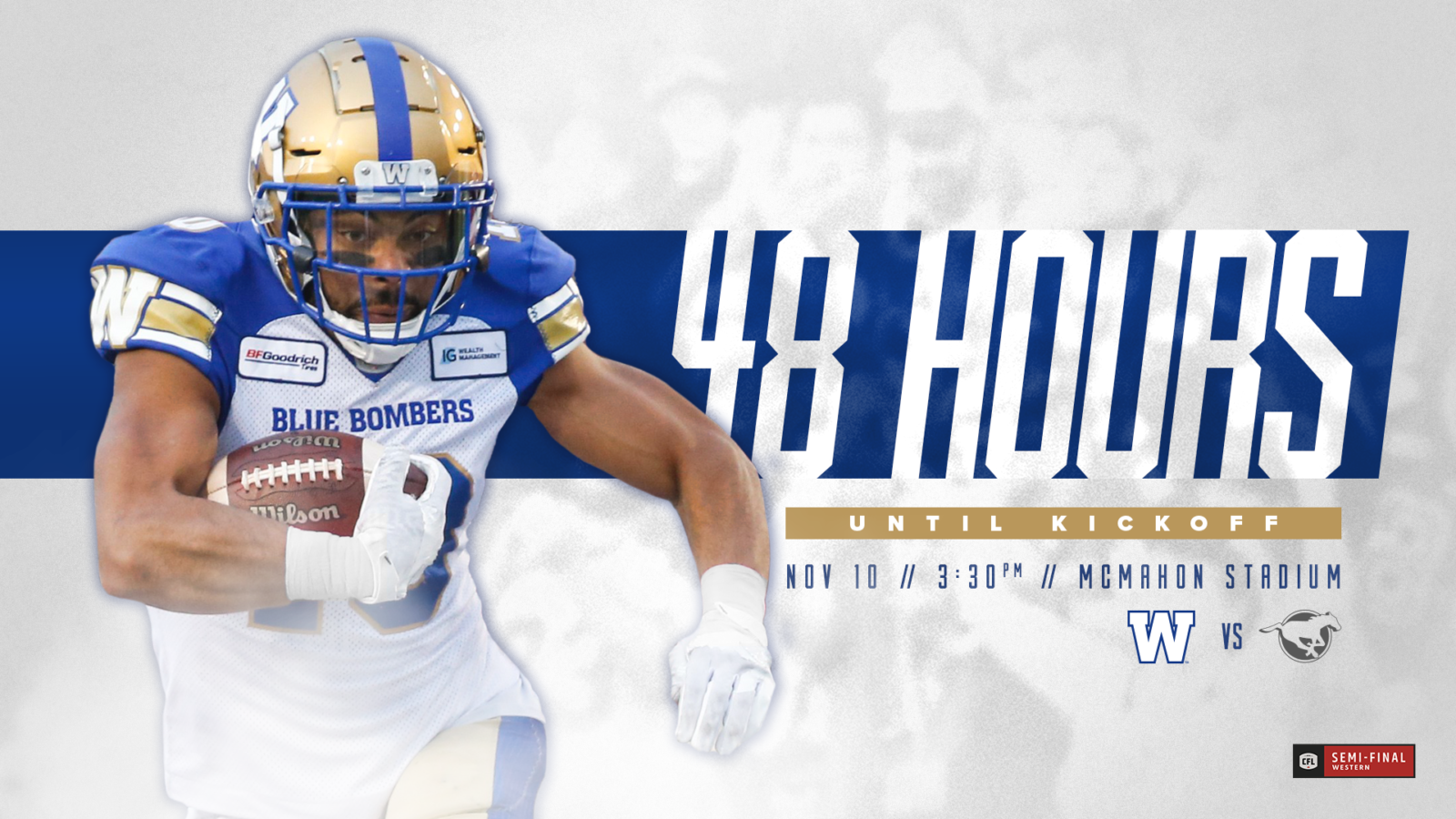 The Bombers completed their final full practice Friday in preparation for Sunday’s Western Semi-Final in Calgary behind closed doors. Here are some of the other notes and quotes from the day’s media availability in this week’s 48-Hour Primer…

The closed practice meant no real updates on the status of QB Chris Streveler or centre Michael Couture. An update on the statuses of Streveler, who did not dress for the final regular season game, and Couture, who was injured in that game, won’t be further updated until the release of the depth chart Saturday and the club’s media availability in Calgary later in the day.

The CFL announced Friday the nine players nominated for the 2019 Jake Gaudaur Veterans’s Award, which ‘recognizes a Canadian CFL player who demonstrates the attributes of Canada’s veterans: strength, perseverance, courage, comradeship and contribution to Canadian communities.’

Presented annually since 2010, the award is named after Jake Gaudaur, a World War II veteran and the longest-serving commissioner in CFL history. Each team nominates a player, with the award being presented during Grey Cup week.

The Bombers nominee is Mike Miller, who was also named a West Division All-Star for the first time, the West Division’s Most Outstanding Special-Teams Player and the team’s top Canadian.

There are a lot of Bomber players who have experienced CFL playoff football before. But for a player like receiver Rasheed Bailey, Sunday will be special. Bailey, you may remember, has had to fight and scrap just to get another opportunity in football, let alone get into the starting lineup for a playoff tilt.

“I’m just so excited. I’m happy for this opportunity. We’ve had a great week of practice, the flow is there and we feel like we can win,” he said. “For me, this is what I’ve been waiting for my whole life and to be part of it and to work my tail off to get to this point… God is so good and I’m super grateful and I can’t wait until Sunday.

“I can’t wait to go out there and just have fun and enjoy my teammates and enjoy the moment. We’re all blessed at the end of the day. Just having that conversation… I was taking notes while I was on the phone with them because I didn’t want to miss any piece of advice they might offer. This game is probably one of the biggest of my career as a professional athlete, but it’s not going to be too big of a moment for me because I’ve been prepared all my life for this.”