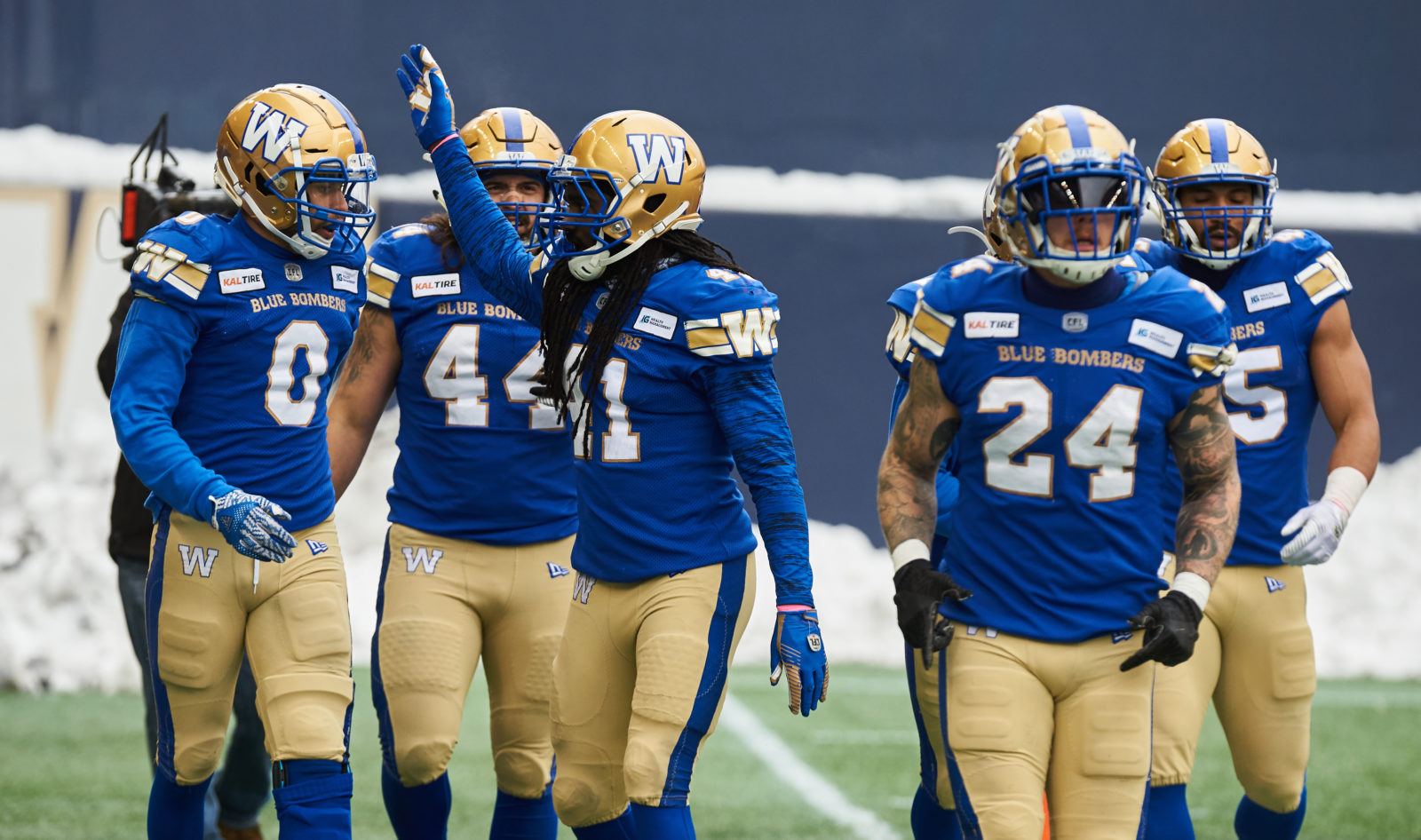 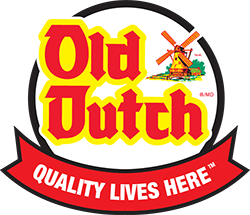 This wasn’t just about applying a tourniquet to temporarily stop the bleeding from a gaping wound. This was about the Winnipeg Blue Bombers rediscovering their identity. And just as important, it was about becoming relevant again at a moment in which so many across the Canadian Football League were ready to begin penning their obituary.

Winnipeg’s 35-24 win over the Montreal Alouettes at IG Field Saturday afternoon wasn’t without its warts, but the mistakes are much more digestible when a team reaffirms what it does best.

And smash-mouth football is what the Bombers do better than any team in the country.

The Bombers owned both sides of the line of scrimmage; defensively sacking the elusive Vernon Adams, Jr. twice and forcing him to throw four interceptions while limiting the Als to just 69 yards rushing, and then offensively pounding the ball with 34 carries for 240 yards and an average of 7.1 yards per rush.

As we pointed out in our game recap, that 240 yards rushing total was the highest since 245 yards against the Als in June of last year – a span of 31 regular season games – and, including the 201-yard effort in the West Semi-Final win over the Saskatchewan Roughriders last November, the third time they’ve eclipsed 200 yards rushing along the ground since the start of 2018. 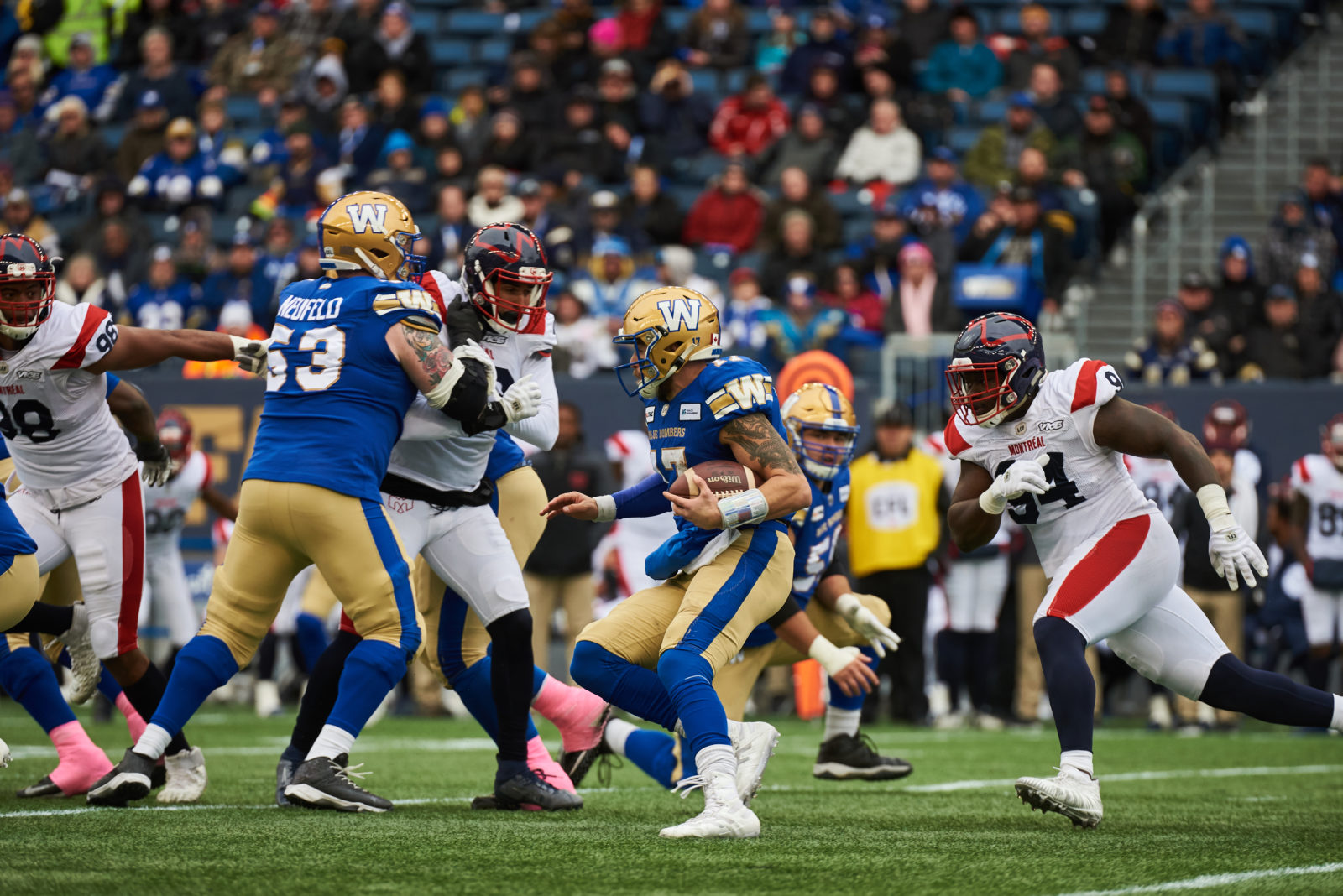 “We feel like that’s our identity. We’re a physical football team up front,” began guard Pat Neufeld after the win Saturday night. “It’s just something we’re comfortable with… it’s not like we can’t win in other ways, it’s just something we like to do.

“We were hoping for a little snow on the field, to be honest, but we had a group mentality that we really wanted to run the ball today and effectively do that. We finally got back to that bully ball that we’ve done before.”

Andrew Harris finished with a season-high 24 carries for a season-high 166 yards as the Bombers averaged a whopping 7.6 yards on first down. Chris Streveler did his thing as well, with 64 yards on just nine carries, while fullback Mike Miller carried once for 10 yards.

“Besides some of the runs that he broke clean through — and the holes were huge through there — just the times he gets caught up and the offensive line joins in, the receivers join in, Strev joins in and the pile just keeps moving and he keeps churning his legs, those things, what they do for a bench, what they do for a team, is something to behold on the sideline,” said Bombers head coach Mike O’Shea.

“Guys are just so fired up when it gets to be one of those rugby scrums, where he gets stopped at four yards and ends up nine yards down field and we’re getting a first down. That happened three or four times this game.”

The victory improved the Bombers to 10-6 and in a bunch atop the West Division that includes the Roughriders and Calgary Stampeders at 10-5. The Bombers have two games left in the regular season – a home-and-home series with the Stamps – and would essentially need to win both and get some help to still finish first. Winnipeg is up 1-0 in it season series with Calgary after a win in August, but lost the season series to Saskatchewan 2-1. The Stamps, meanwhile, have the upper hand in a possible tiebreaker with Saskatchewan, having captured that season series. 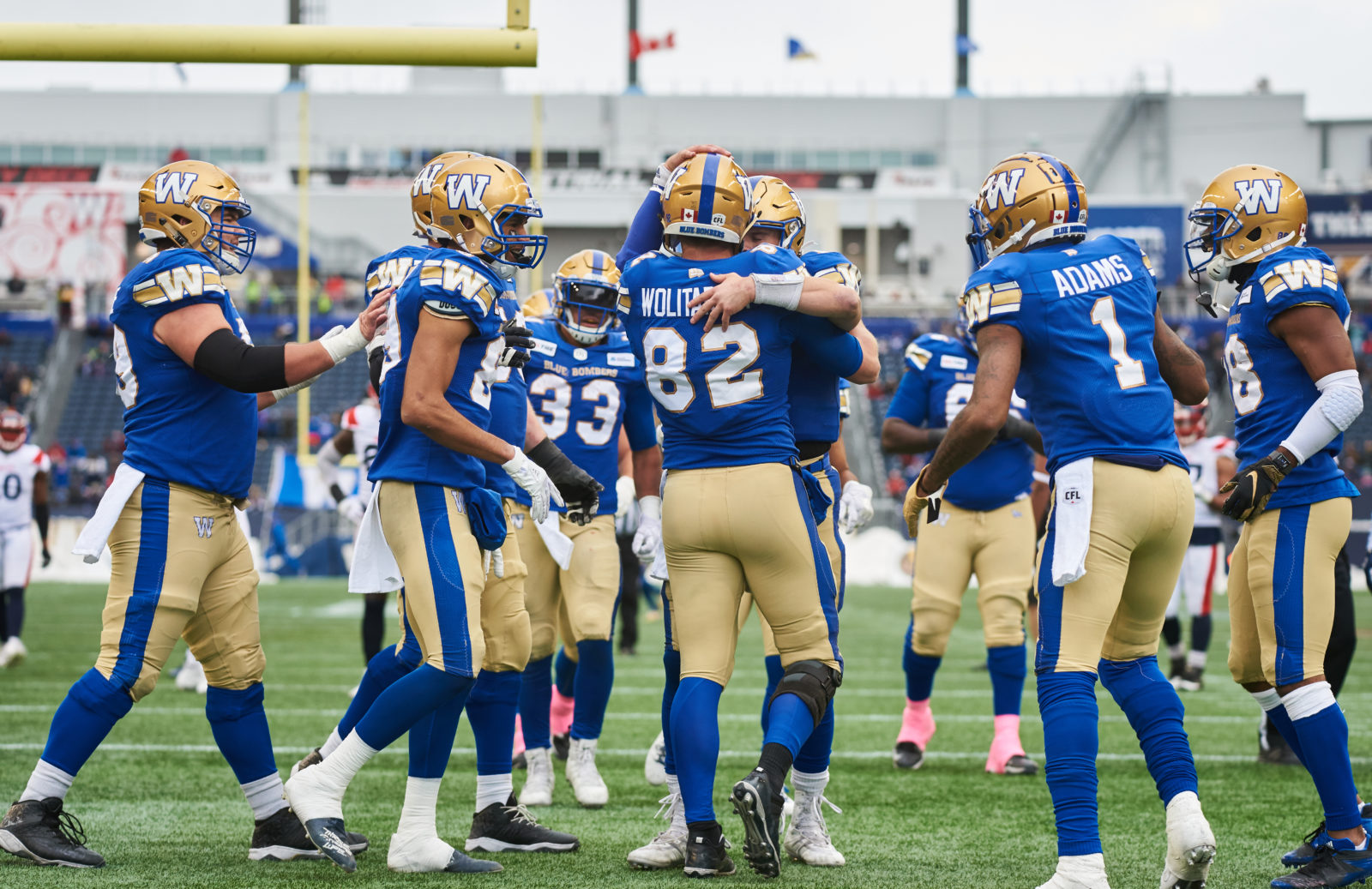 Perhaps it was knowing what is ahead that created a somewhat subdued post-game vibe in the Bombers dressing room Saturday night. The victory was important, no question, but there’s so much heavy lifting left.

“We’ll watch the film and see the corrections, but we know we’re still going to have to be better,” said safety Brandon Alexander. “We know the team we’re playing next week has been there before, they’ve been there every single year for the past four-five years now. We understand what’s at stake. We know we’ve got to go in there and play Bomber football.” 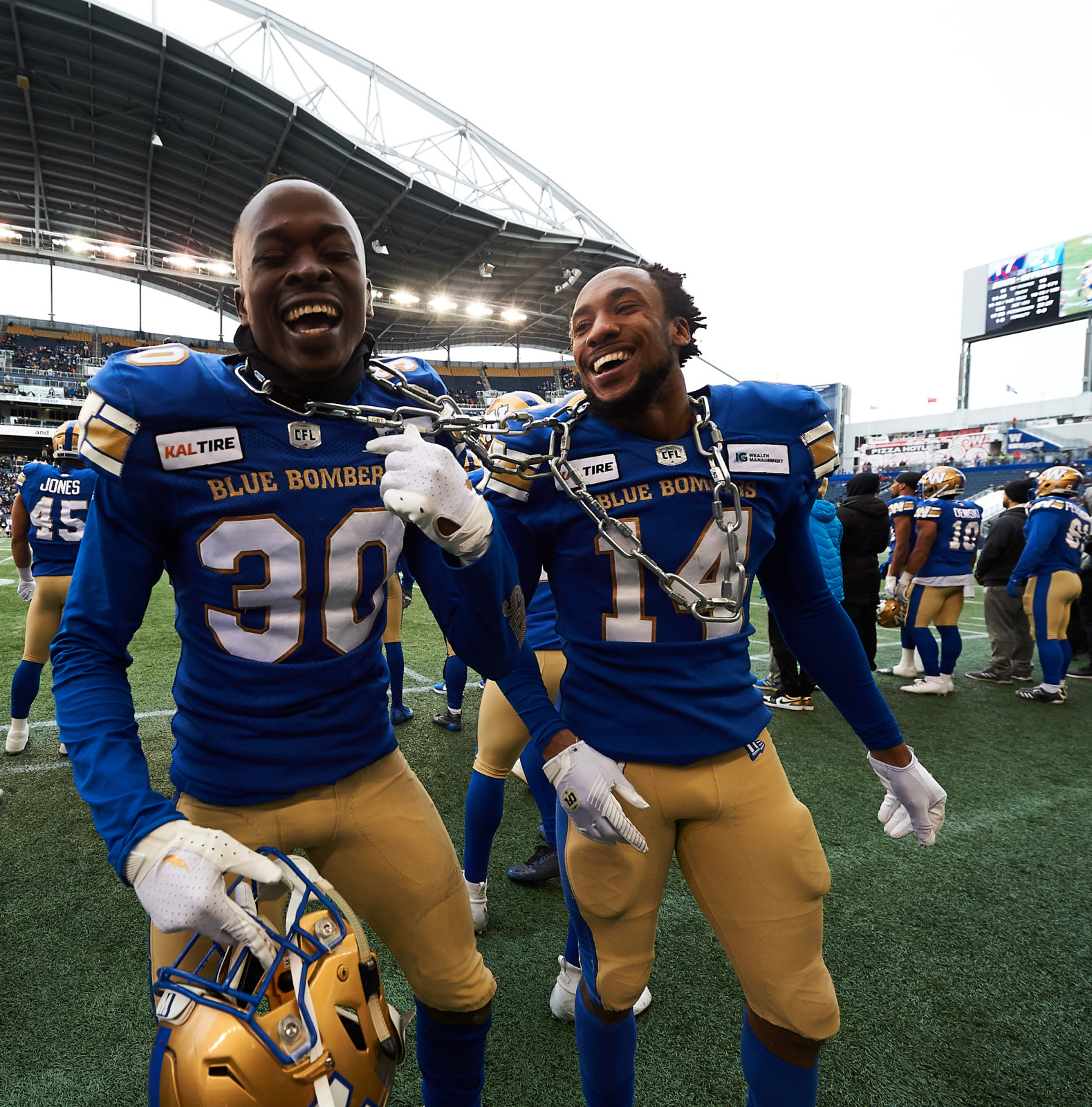 SO MANY EYES WERE ON CHRIS STREVELER… heading into the game, what with his struggles in the loss to Saskatchewan and the arrival of veteran quarterback Zach Collaros from Toronto at the trade deadline last week.

Streveler did his thing along the ground and threw for a touchdown to Drew Wolitarsky, but also had two passes intercepted. He finished 15-of-25 for 174 yards. Still, a win is a win is a win.

“I had two interceptions and that’s never good,” Streveler said afterward. “I felt like the reads were right, the throws were just not good enough. One I threw it a little too high and the safety tipped it. Not a great throw. The one before half, it was man-to-man coverage and I threw it up to Darvin (Adams) and the corner made a nice play. I wish I would have put it a little more outside.

“Other than that, I thought I was seeing the field well, I felt like we really did a good job of mixing up play calls and getting good looks. Guys were doing a good job getting open, and making plays. As any game, there are always plays you wish you had back and could do better, but we won and that’s the biggest thing to me.”

Asked about his concern about the two interceptions O’Shea, naturally, defended his QB.

“I’m sure Strev wants to put the ball a little further for Darv there,” he said of the first interception, which came just before halftime and the Bombers leading 15-10. “There are other things we can do on that play to make a difference so that the outcome’s not bad.

“The (other) one, he just overthrew. We took a holding penalty that put us in a (first and 20) situation. It’s probably more mechanical when the ball sails a little bit. But he’s on the right guy, so that’s what you want.”

The Bombers are now 3-4 in games in which Streveler starts this year, including the Labour Day Classic where they held a late lead and could close and the meltdown in Montreal in which they surrendered a 20-point fourth quarter lead.

Collaros, FYI, is expected to practice when the Bombers return to the field on Tuesday. 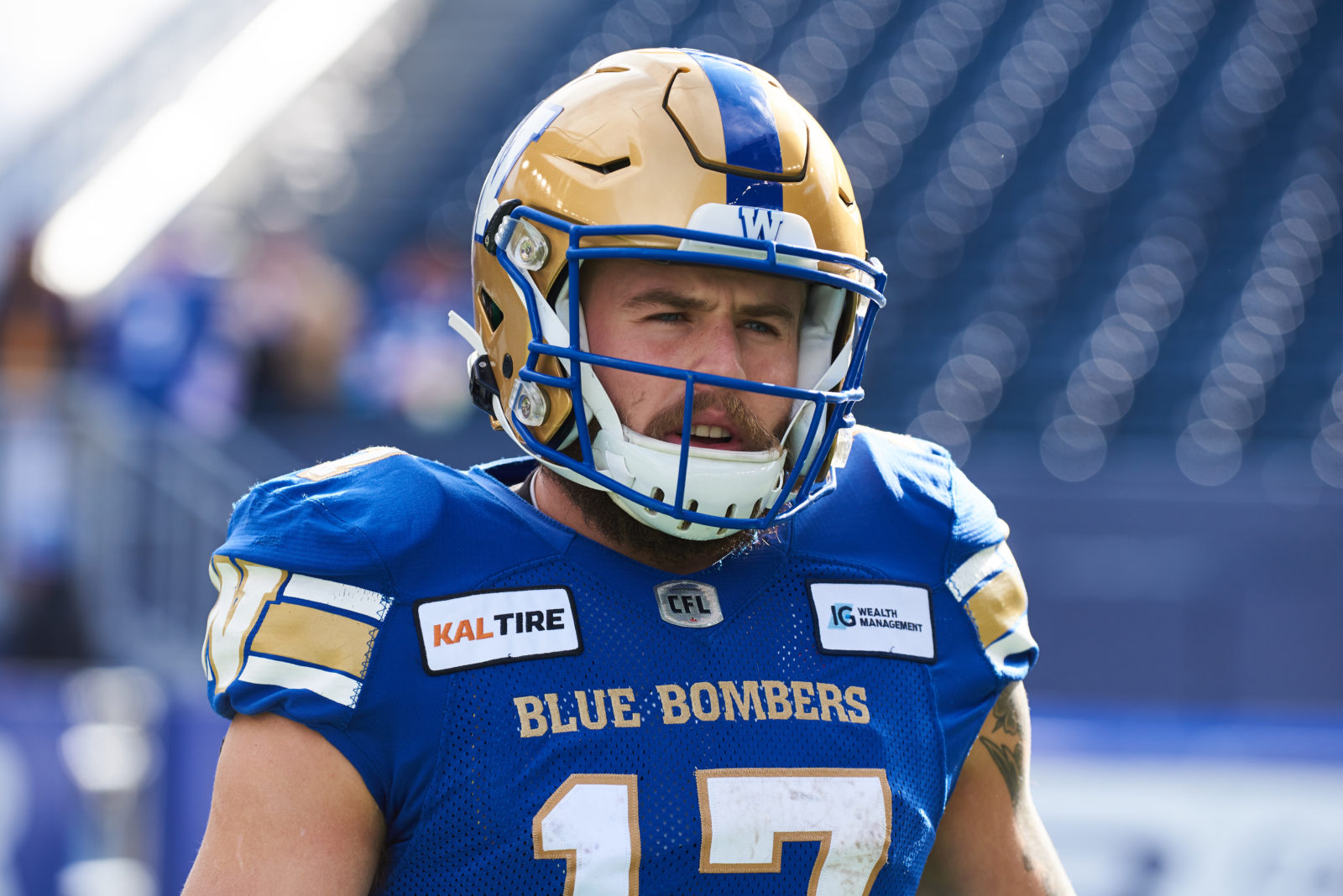 IT’S BECOMING MORE AND MORE… evident the voters for the CFL’s Most Outstanding Player Awards will pass on Bombers running back Andrew Harris when it comes time to scratching names on their ballots following his two-game suspension after a random drug test revealed traces of a banned substance.

Harris does lead the CFL with 1,261 yards and four touchdowns and has added 61 receptions for 487 yards and another four TDs in 14 games.

The two men chasing Harris in an attempt to prevent him from winning his third-straight rushing title – Edmonton’s C.J. Gable and William Stanback of Montreal – did not play this weekend. Harris’ lead atop the rushing chart has now grown to 264 yards over Gable, who is in second spot.

So if not Harris for CFL MOP or even the Bombers or West Division nomination, who? Discuss among yourselves.

IT WAS A BIT OF AN EYEBROW RAISER… when the Bombers announced before kickoff on Saturday that receiver Lucky Whitehead would be scratched from the lineup. Both Rasheed Bailey and Janarion Grant took the offensive reps in Whitehead’s place, with Bailey leading the team with five catches for 86 yards.

Here’s O’Shea in explaining the decision:

“Just trying to put a different guy in the lineup and see what it does. The way our roster is right now it’s almost like we’ve been holding Rasheed back. If you come out to practice and watch, he’s 100 miles per hour every practice and he catches everything and goes up and high-points it and makes the tough catches. So, we just thought we’d give him another shot.

Bailey has now dressed for three games – two of which he took offensive snaps – and has 10 catches for 119 yards.

“It just feels good to make those plays, to be a part of the win and to celebrate with your teammates. That’s a good feeling,” said Bailey. “You guys are getting a glimpse of what I can do. I’ve still got to work on a few things and get back in the lab. But I’m slowly coming along and we’re winning. It felt good to get that ‘W’, that’s the most important thing.” 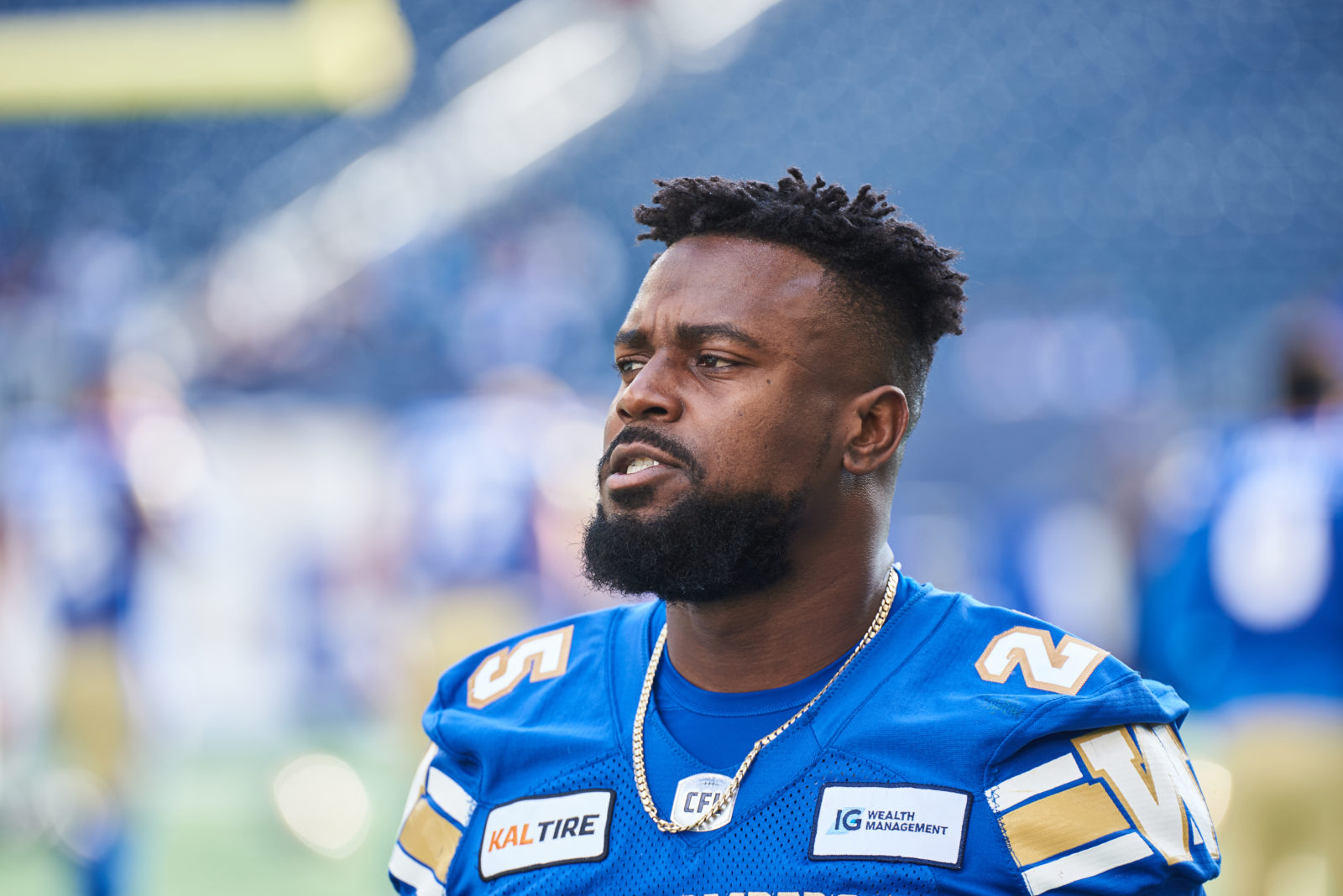 ANOTHER ‘NEWCOMER’ WHO MADE AN IMPACT… on Saturday was defensive back Nick Taylor, who made a critical Pick-6 in what was the game’s pivotal moment.

The Bombers held a 24-17 lead early in the fourth quarter when Taylor stepped in front of an Adams, Jr. pass and then promptly returned it 37-yard for a TD.

“That’s just film study, man,” Taylor explained. “We knew that sometimes when they were in that concept and when the play got strung out I was on top of the route already and once he threw it I thought I could get underneath it and hopefully steal it. The ball was there, I got it, I was able to stay in bounds – I don’t know how – and then take it down the field into the end zone.”

The Bombers signed Taylor in mid-August in what was essentially a depth move, adding the 31-year-old vet who had experience with Ottawa and Edmonton. But when Anthony Gaitor was injured, Marcus Rios moved into his position, leaving a starting halfback spot open. Taylor has started the last two games, after getting cut by the Eskimos in camp this year, before being re-signed and then suiting up for three games prior to his release.

“It’s been a real weird year,” said Taylor. “I came back to Edmonton figuring I was going to play and contribute, but things didn’t work out that way. Things got a little weird and I ended up leaving.

“The Winnipeg opportunity came up and I was just ready for it. I didn’t know if I was going to play or not this year, but I was ready to come in and be a great teammate anyway and do what I can. And if the opportunity came I knew I could help out because I’m a veteran who has been around the league for a while and seen a lot of routes and a lot of concepts.” 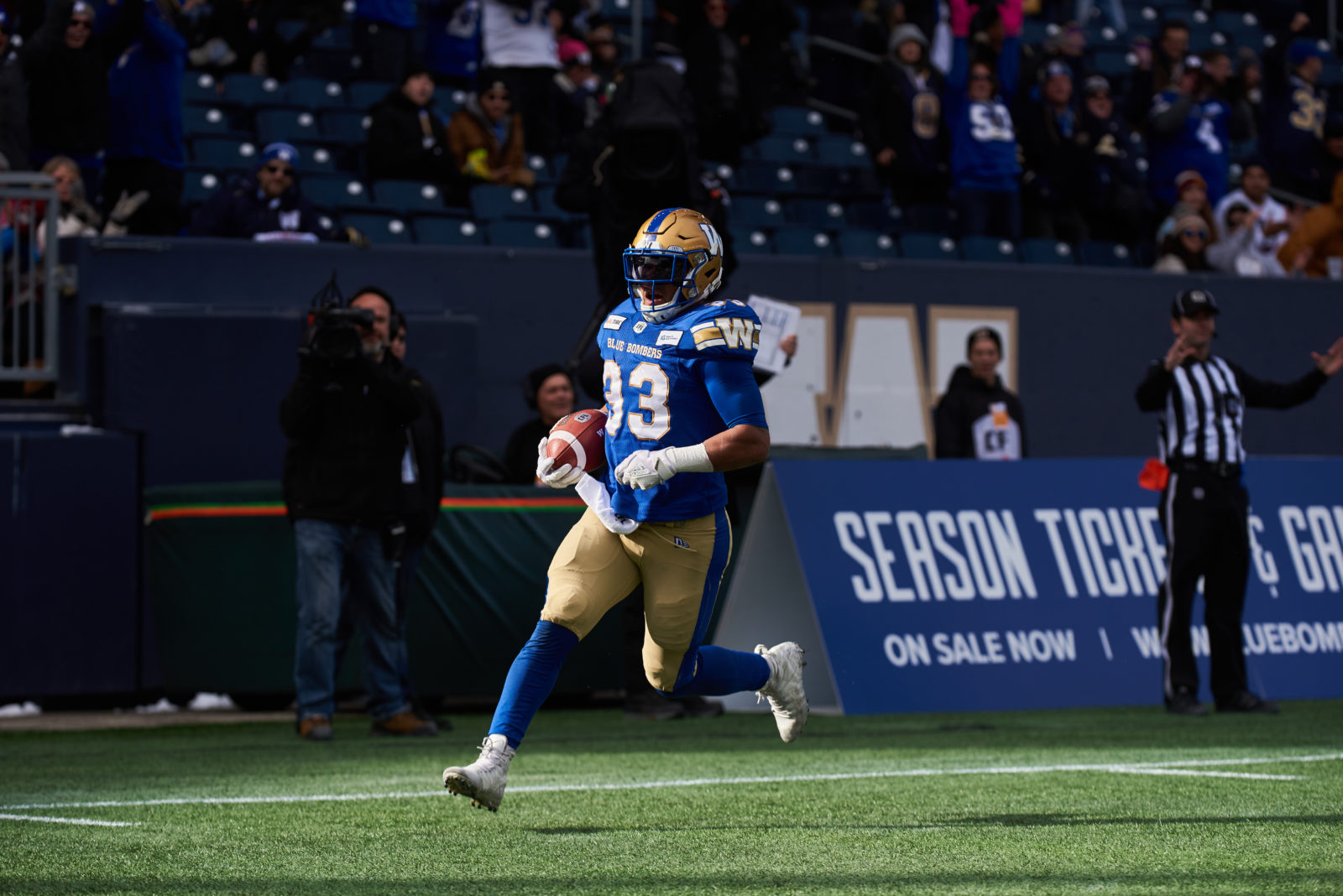 A LOT OF BOMBERS FANS WERE WONDERING… about a scoring play in the third quarter in which Adams, Jr. connected with Jake Wieneke for a 30-yard TD, but the quarterback appeared to be over the line of scrimmage when he threw.

Here’s the best explanation, courtesy the CFL Football Operations department when the question was put to them on Twitter during the game.

AND, FINALLY… the last word in this week’s Upon Further Review goes to defensive back Marcus Sayles, who had two interceptions and forced another turnover when he tackled Montreal punter Boris Bede when he opted not to kick as Jeff Hecht stormed in for a block.

Sayles offers a sense of the mood in the locker room after the Bombers ended their three-game skid.

“It was almost a whole month that we didn’t win a game,” said Sayles. “It’s great for us to be able to get that momentum back and get back on track and get that feeling that we can still win this.

“With Sask., losing to Calgary (on Friday night), it makes the race a lot more tight. We just hope we can go into these next two weeks, playing Calgary, and take care of business.”