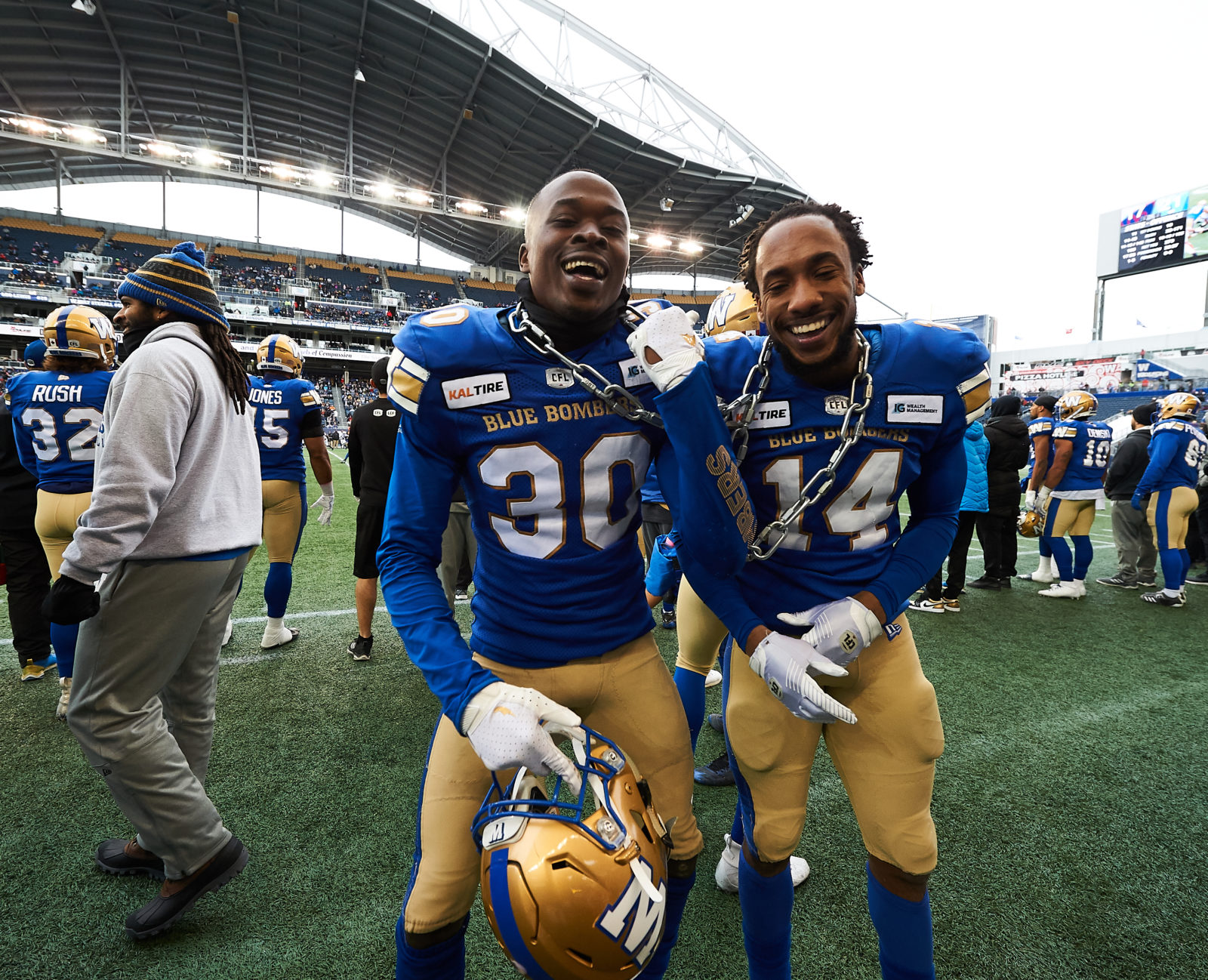 The Winnipeg Blue Bombers’ formula for winning isn’t as simplistic as A+B=C, nor is it a calculation that is carved in stone as an absolute.

That said, when the Bombers control the line of scrimmage and take the ball away – just as they did in Saturday afternoon’s 35-24 win over the Montreal Alouettes in front of 20,907 at IG Field – it does look so very familiar to so many of the franchise’s other wins this year.

The Bombers pounded the line of scrimmage offensively, finishing with 240 yards rushing while not surrendering a sack, and then created two QB-kills of their own and forced five turnovers, including a Pick-6.

In the process they stopped a three-game losing streak, improved to 10-6 on the season and found a little of their mojo again.

“We were able to control the line of scrimmage for pretty much the whole game and it starts with those five-six O-linemen up front,” said Andrew Harris, who was sensational with 24 carries for 166 yards, including a 16-yard touchdown. “We were able to carry that out for the most part and when the defence creates turnovers and scores points on those turnovers it’s always a plus. And they were able to keep their offence at bay for most of the second half.

“If you look at the game as a whole the physicality was there, the attention to detail was there. We got back to being ourselves again. It was a great game, but we’ve got to keep building off this and keep taking that next step every game as we go forward.” 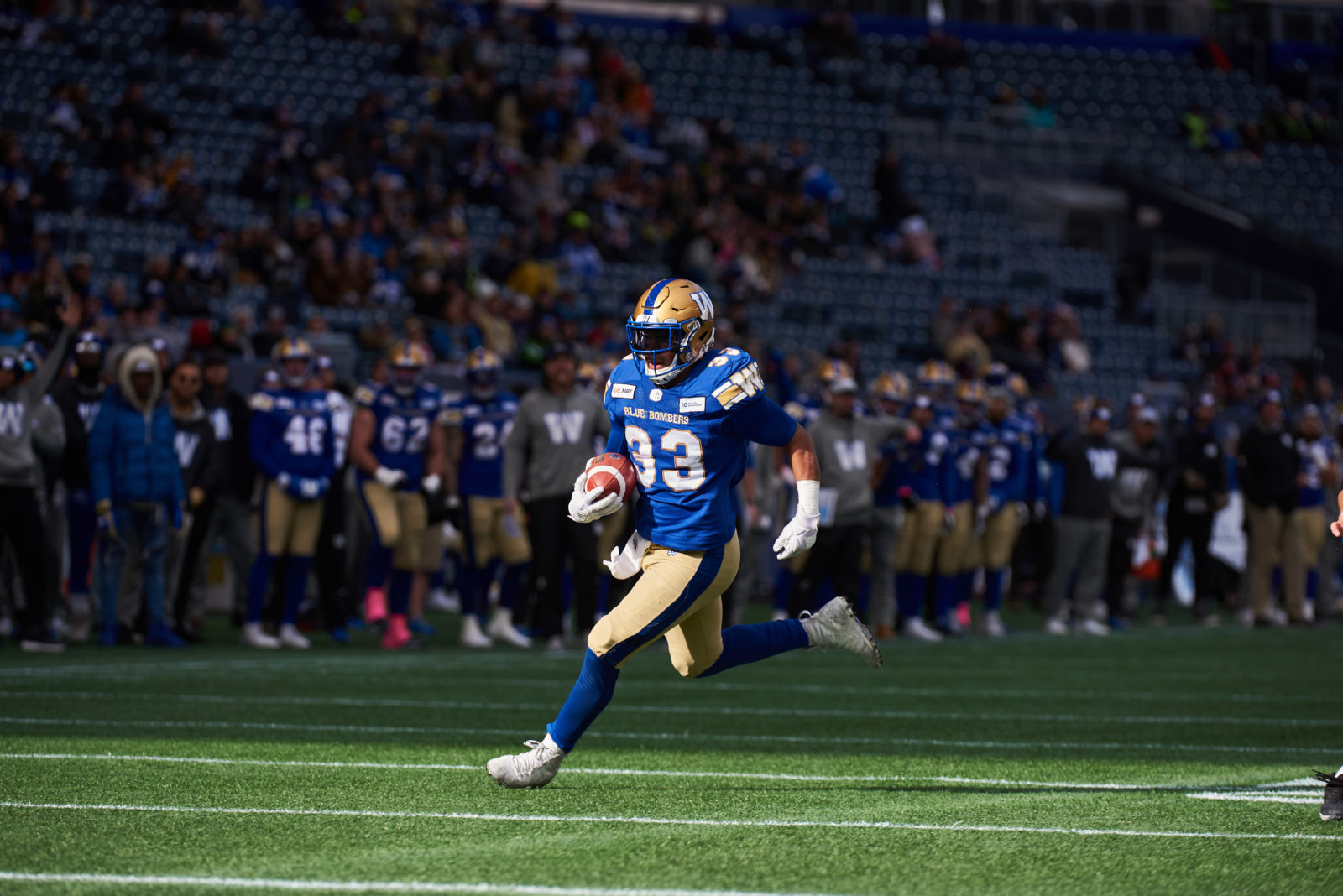 The result puts the Bombers right back in the conversation in the sprint to a home playoff game in the West Division. The Saskatchewan Roughriders and Calgary Stampeders are both 10-5, but the Bombers’ two remaining games are against the Stamps and they are up 1-0 on that season series after a 26-24 win back in August.

Worth noting here is the Bombers have now reached double digits in wins for the fourth straight year, a feat not accomplished in these parts in 32 years dating back to 1984-87.

The 166 yards rushing by Harris was complemented by 64 yards from Chris Streveler and 10 from fullback Mike Miller to give the Bombers their highest rushing total of the season and the most since cranking out 245 yards along the ground in a win over the Alouettes back in June of last year.

“When you take the ball away five times it’s unreal. That’s awesome,” said Streveler, who finished 15-of-25 passing for 174 yards with a TD strike to Drew Wolitarsky but two interceptions. “We had two giveaways, one in the end zone and it’s tough to win sometimes when you give the ball away in the end zone.

“The defence did a great job of just picking us back up, picking us back up. And the offensive line… blocking so hard and moving piles. There were times when I thought Andrew was going to get three yards and he got nine.” 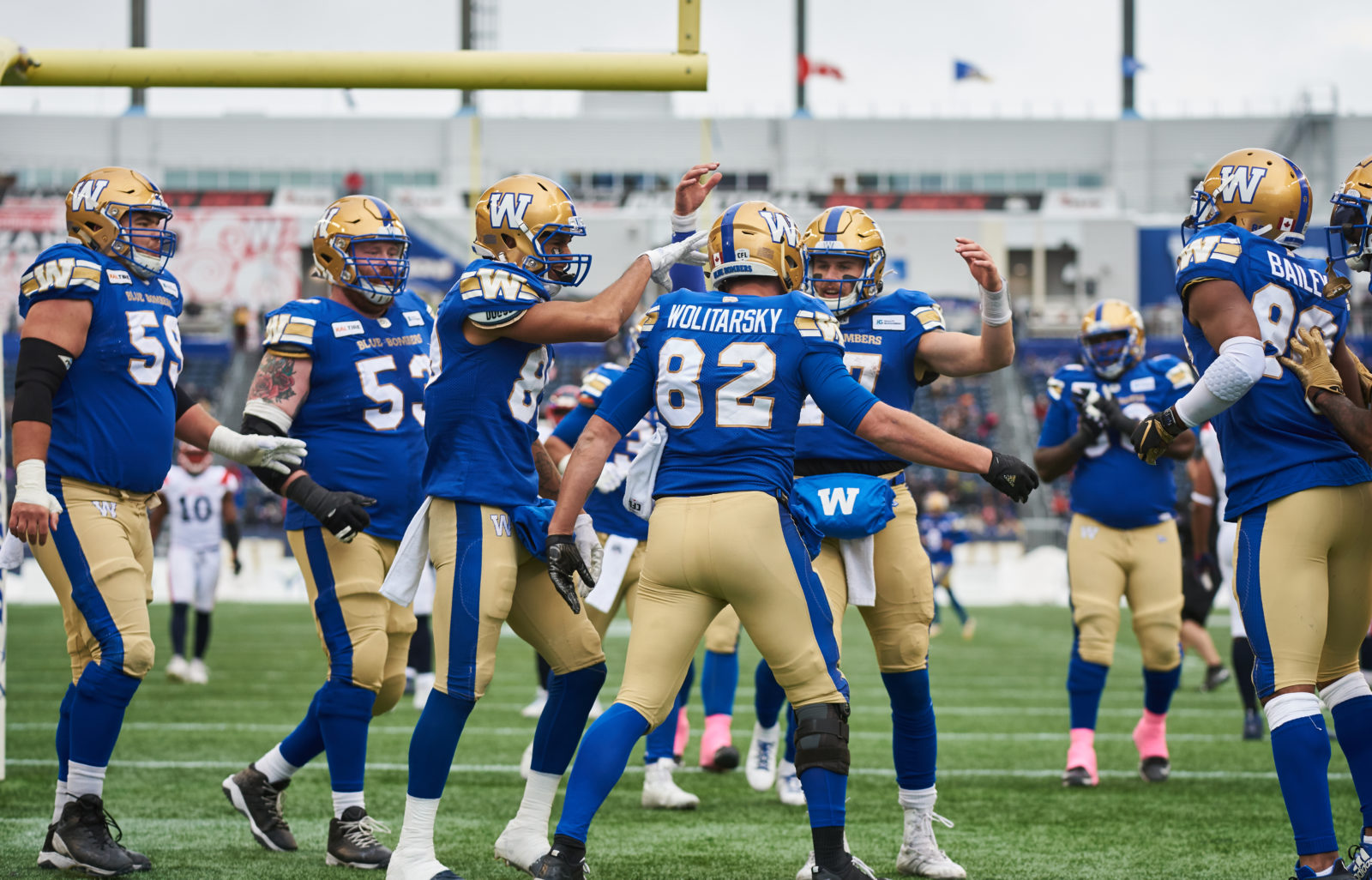 “Those guys played so hard tonight. I’m just so proud of this team and the way the defence played. And everyone just picked everyone up. It’s just an awesome team win.”

Critical in the victory were the four interceptions forced by the defence – two by Marcus Sayles, with one from Chandler Fenner in the end zone and a fourth returned 37 yards by Nick Taylor, making just his second start, for a TD.

Sayles didn’t just pick two Vernon Adams Jr. pass attempts, he was also at the centre for another turnover when he forced Alouettes punter Boris Bede to pull the ball down rather than have a punt blocked.

Takeaways by the Bombers – four interceptions and a turnover on downs when Montreal punter Boris Bede had to pull up before kicking in the face of a swarm of would-be blockers. The Bombers had none in last week’s loss to Saskatchewan, the first time this year they had been shut out in that department. 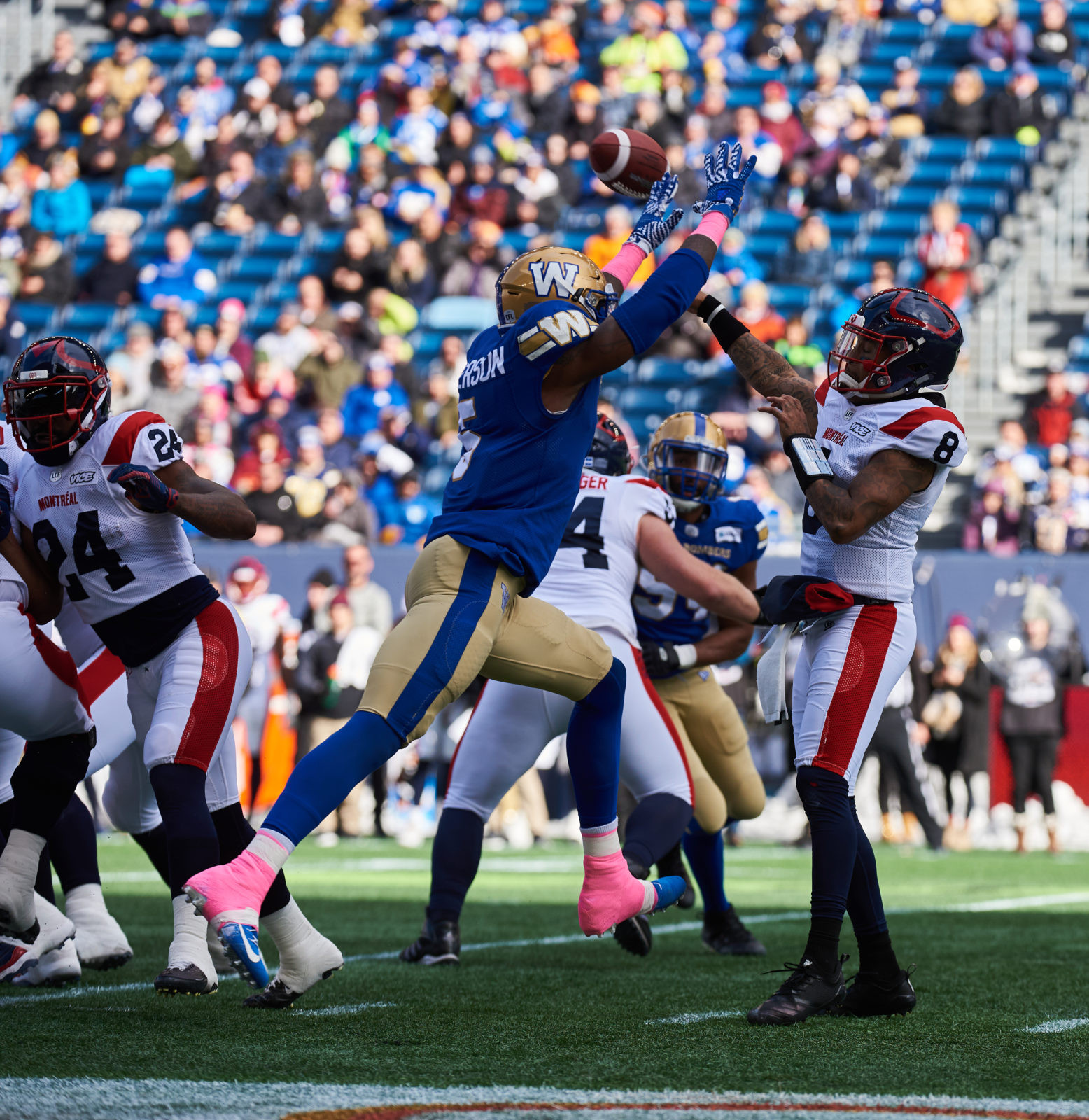 The Bombers’ scratch was WR Lucky Whitehead. Rasheed Bailey and Janarion Grant shared the spot and combined for six receptions for 92 yards, with Bailey having five catches for 86… LS Chad Rempel was injured in the first half and did not return. Thomas Miles handled those chores in the second half… The Bombers honoured 2019 Hall of Fame inductees Less Browne and Dr. Bert Longstaffe at halftime… New QB Zach Collaros did not dress on Saturday. He was moved to the one-game injured list.

1,500: Bombers kicker Justin Medlock finished 4-of-4 on field-goal attempts and in the process became the 14th player in CFL history to hit reach 1,500 points scored in his career.

12:  Willie Jefferson picked up his 12th sack of the season, three back of CFL leader Charleston Hughes of the Riders, who has 15. Jefferson also had three pass knockdowns, increasing his CFL lead to 15