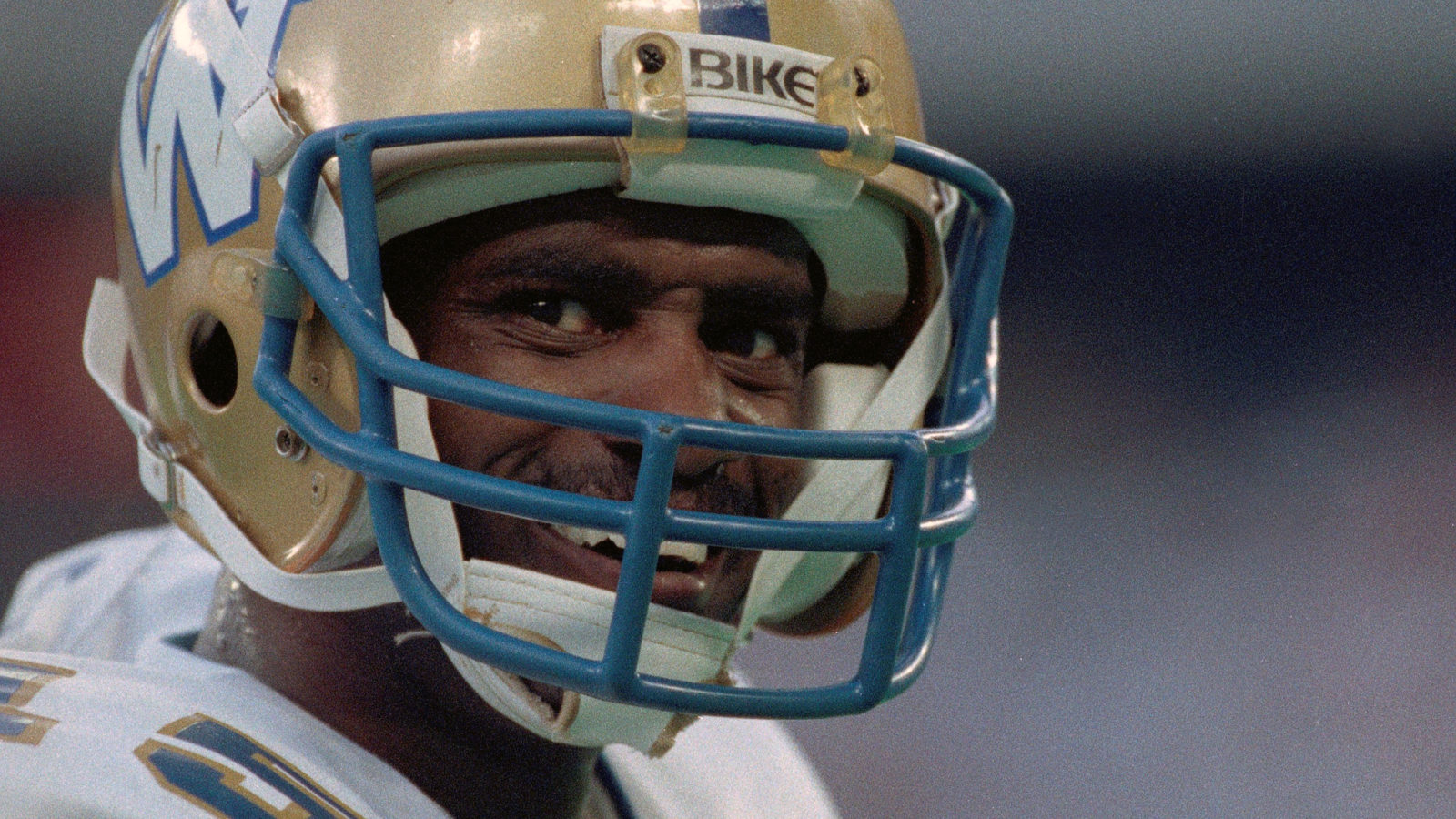 The Winnipeg Football Club will officially welcome two new members to its Hall of Fame this weekend: Less Browne, who played for the Bombers from 1989-91 and served as an assistant coach from 1999-2004, and Dr. Bert Longstaffe, a team physician for 45 years. This is the second of our two profiles on the new inductees.

Maybe it was simply fate or, perhaps, divine intervention. Whatever the case, Less Browne certainly doesn’t sweat the details all these years later.

Rewind to 1989 and Browne, despite already having established himself as an elite shutdown corner in the Canadian Football League, was suddenly out of work – again. He had been released by the Hamilton Tiger-Cats with three games remaining in the 1988 season even though he was a two-time CFL All-Star, was cut by the Edmonton Eskimos in June of 1989 after pulling his hamstring in training camp.

Yet, before he had even left Alberta the Winnipeg Blue Bombers were on the line with an open invitation.

“I went to talk to the general manager in Edmonton he told me, ‘Well, you’re not headed home. Mike Riley (then the Bombers head coach) wants you in Winnipeg,’” Browne told bluebombers.com 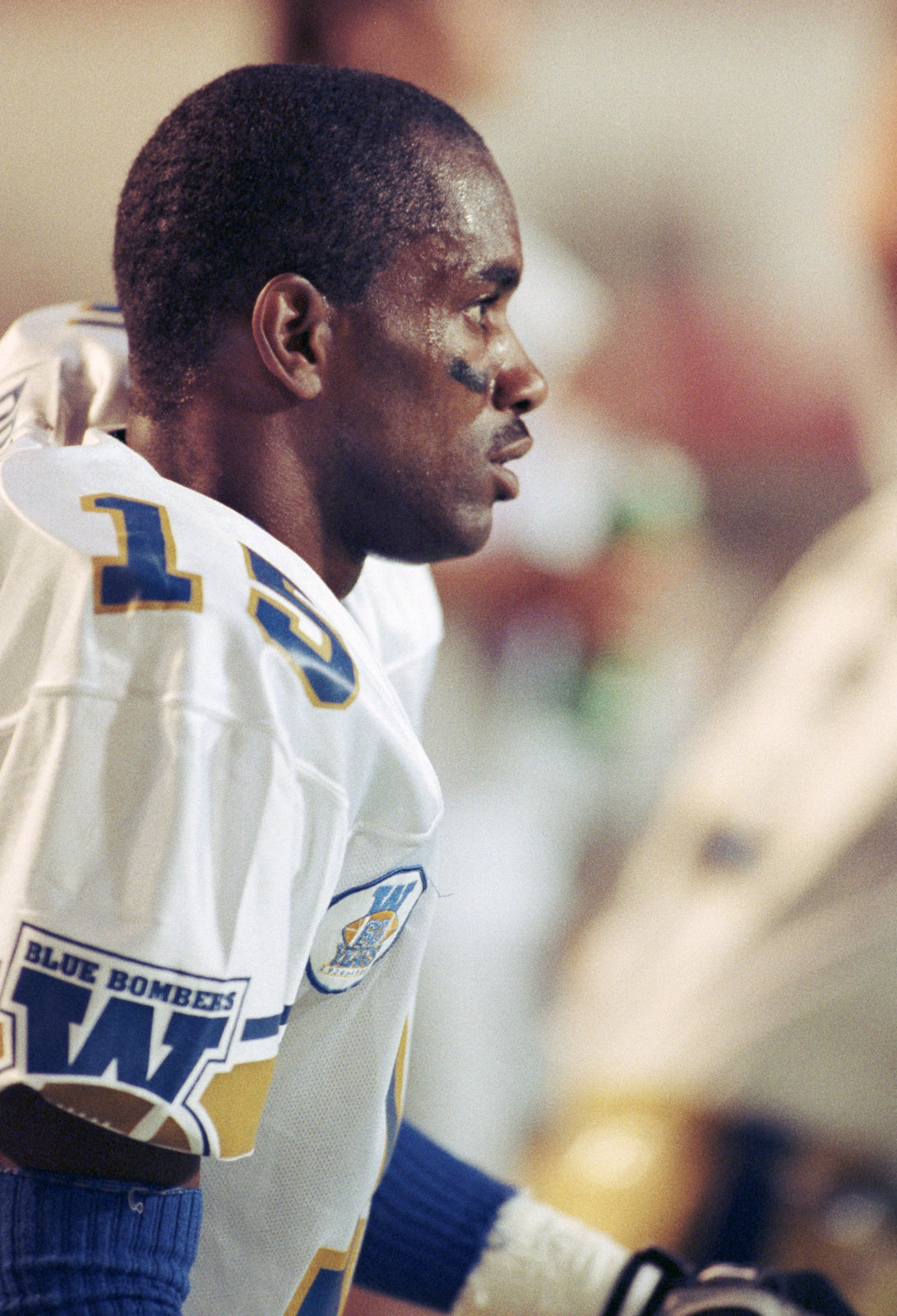 That is a colossal understatement, as Browne’s three seasons in Winnipeg were arguably the best in his 11-year CFL career. He had three interceptions in 1989, and then set a team record that still stands with 14 in 1990 before adding 10 more in 1991.

More importantly, his addition solidified an already imposing secondary and added that much more bravado to a defensive dozen that oozed it.

“Man, we had a lot of fun,” said Browne with a chuckle of his days with the Bombers. “They used to say I was a loudmouth. Well, I was the quiet one on that defence in Winnipeg. You had to talk to James West and Tyrone (Jones) and Rod (Hill) first before you even thought about me.

“And that defence… wow. We had a linebacking corps that stayed stable. Greg Battle, James West, Tyrone Jones, Paul Randolph… those guys were steady and the guys we put in front of them (on the D-line), they would teach them where to be, where to line up, how to help, what gap to go to.

“And then with the secondary we had… a quarterback would be looking at his first receiver, his second receiver and then often his third and by then he was going to go down. There was me and Rod on the corners, Ken Pettway, Ken Hailey, Darryl Sampson on the inside and Dave Bovell as a safety would knock anybody out who came over the middle.

“So, every time we stepped on the field we were challenging offences. It was, ‘Beat us, if you can’ and we were pretty damn good. Mike Riley knew what he had and he and Cal Murphy wanted to keep that together. Then they worked on the offence.

This is what perfect looked like: the ’90 Bombers surrendered just 398 points – Edmonton was second best at 510 – set CFL records for most turnovers forced (89) and most interceptions forced (48) that still stand, all en route to a 50-11 spanking of the Eskimos in the Grey Cup. 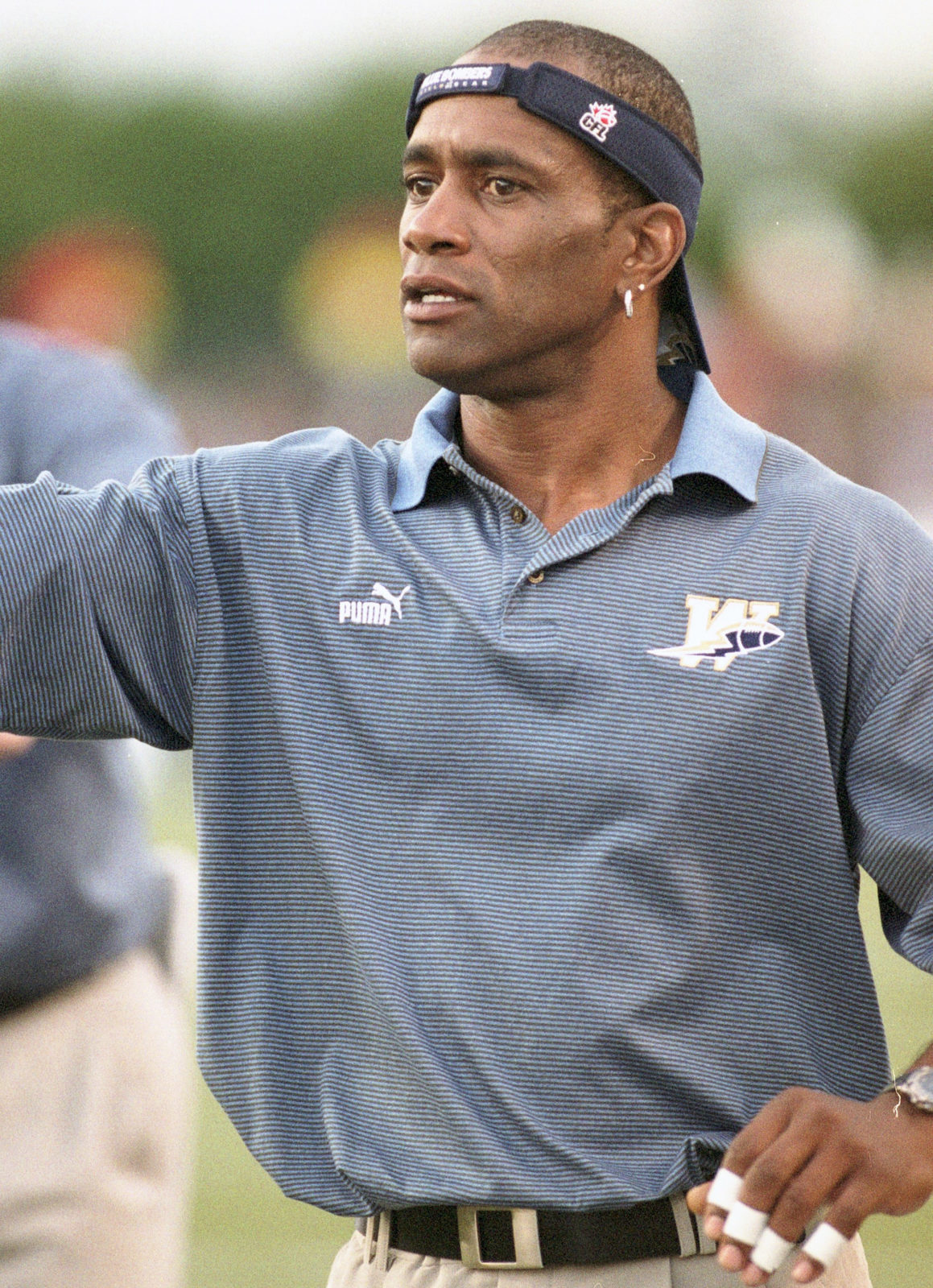 Browne’s 14 interceptions was augmented by Hill’s 12, giving the two Bomber cornerbacks a whopping 26 picks between the two of them.

“That’s pretty damn good, isn’t it?” said Browne. “That season, Mike Riley had a lot to do with it because after getting cut twice in one year my confidence was low, really low. Mike pulled me into the office one day and said, ‘You’re right there. You’re covering everybody like a blanket, just start making the plays now.’ Most times coaches will tell you they don’t want you looking for the interceptions because you might mess up and they might make a touchdown.

Browne was traded to the Ottawa Rough Riders before the 1992 season for Gerald Wilcox, following Dave Ritchie – who had been an assistant with the Bombers – to the nation’s capital, and then to B.C. in 1993, with Ritchie again when he became the Lions head coach before retiring.

It wasn’t too long after that, when Ritchie landed the head-coaching job in Winnipeg in 1999, that Browne returned to the Bombers, first as their linebacker coach and then as defensive back coach.

“I was doing the TSN thing (as an analyst) and Coach Ritchie gave me a call and said, ‘Hey, do you still want to keep doing that TV stuff or do you want to come coach?’” said Browne. “I said I’d think about it, and then he convinced me to come out there and coach with him.

“I believe in God and the path he chooses for me. I always prayed, even though people thought I was a little crazy, and the path he picked out for me was perfect and awesome because when I was in Winnipeg I ran into the pied piper, Coach Ritchie, and I seemed to then follow him wherever he went. When he left Winnipeg and went to Ottawa, I went to Ottawa. When he went to B.C., I went to B.C. That’s why I call him the pied piper because it wasn’t just me, it was a few others that seemed to follow him around. 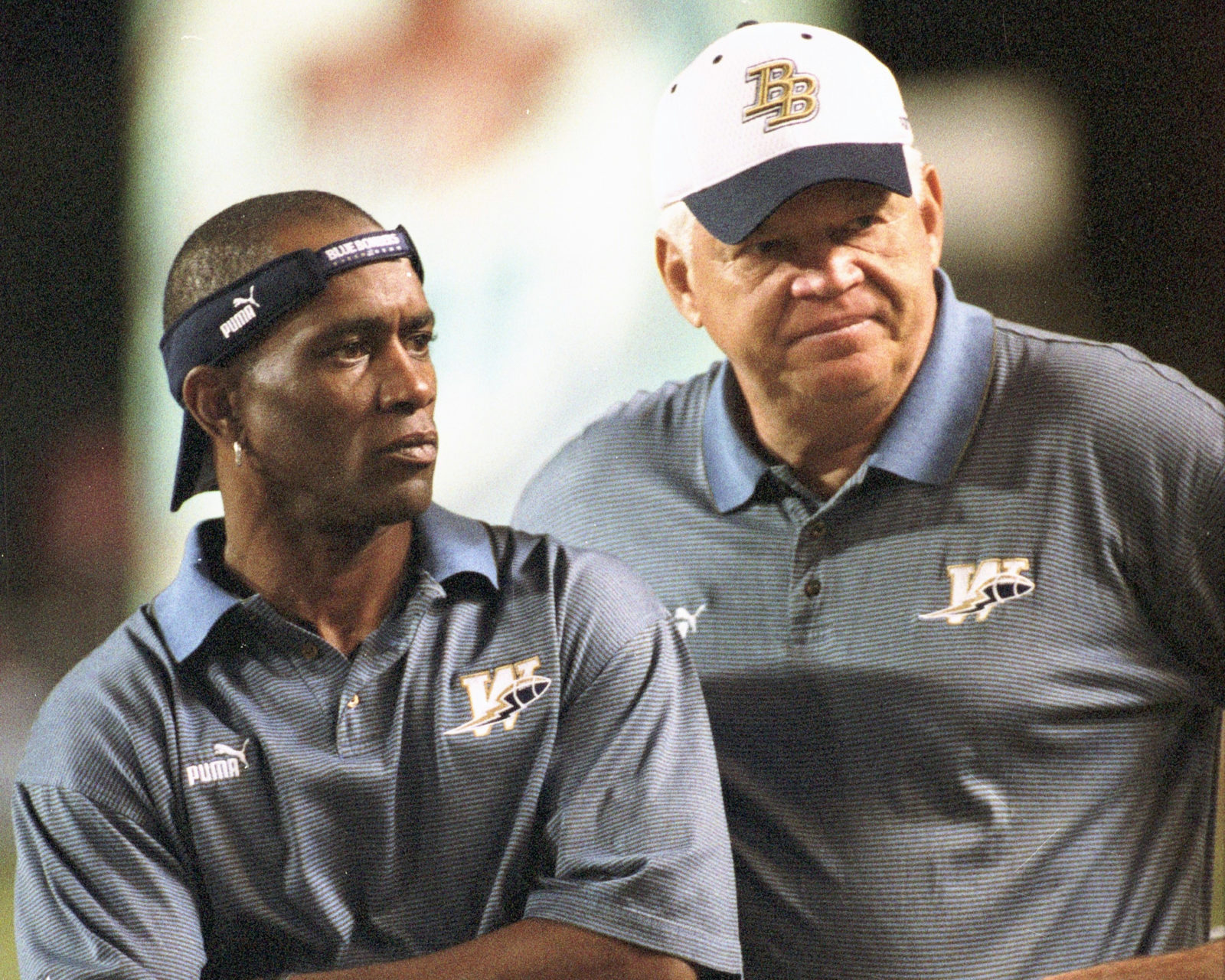 Another example of the fate that somehow brought him to a career and then a life in Canada, as Browne and his family live in Hamilton where he is a supervisor for the Hamilton Roads Department: he left Colorado State before his eligibility was done to return home to Pittsburgh to work.

“I was working at The Gap selling clothes,” Browne recalled. “And that’s when the USFL started up and the Pittsburgh Maulers were having an open tryout.

“So I go to the tryout and 800 people show up. I remember, because I was No. 801 and of those 800 people – and after saying my family prayer – I was one of the six they asked to stick around.

“They told me they were going to draft me and I said I didn’t give a crap what round, I just wanted to play ball after working at The Gap and selling clothes for two years.”

Browne played a season with the Maulers when he got a call from an assistant coach with the Tiger-Cats who had also been at Colorado State – Rich Stubler, who all these years later is still in the league as the B.C. Lions defensive coordinator.

And with that began his Canadian journey.

“I am so very proud of my career,” Browne said. “And I’m so excited to get inducted into the hall of fame there with the Bombers because that city has always appreciated defence and how important it was in the 1990 championship.

“This is such an honour.”