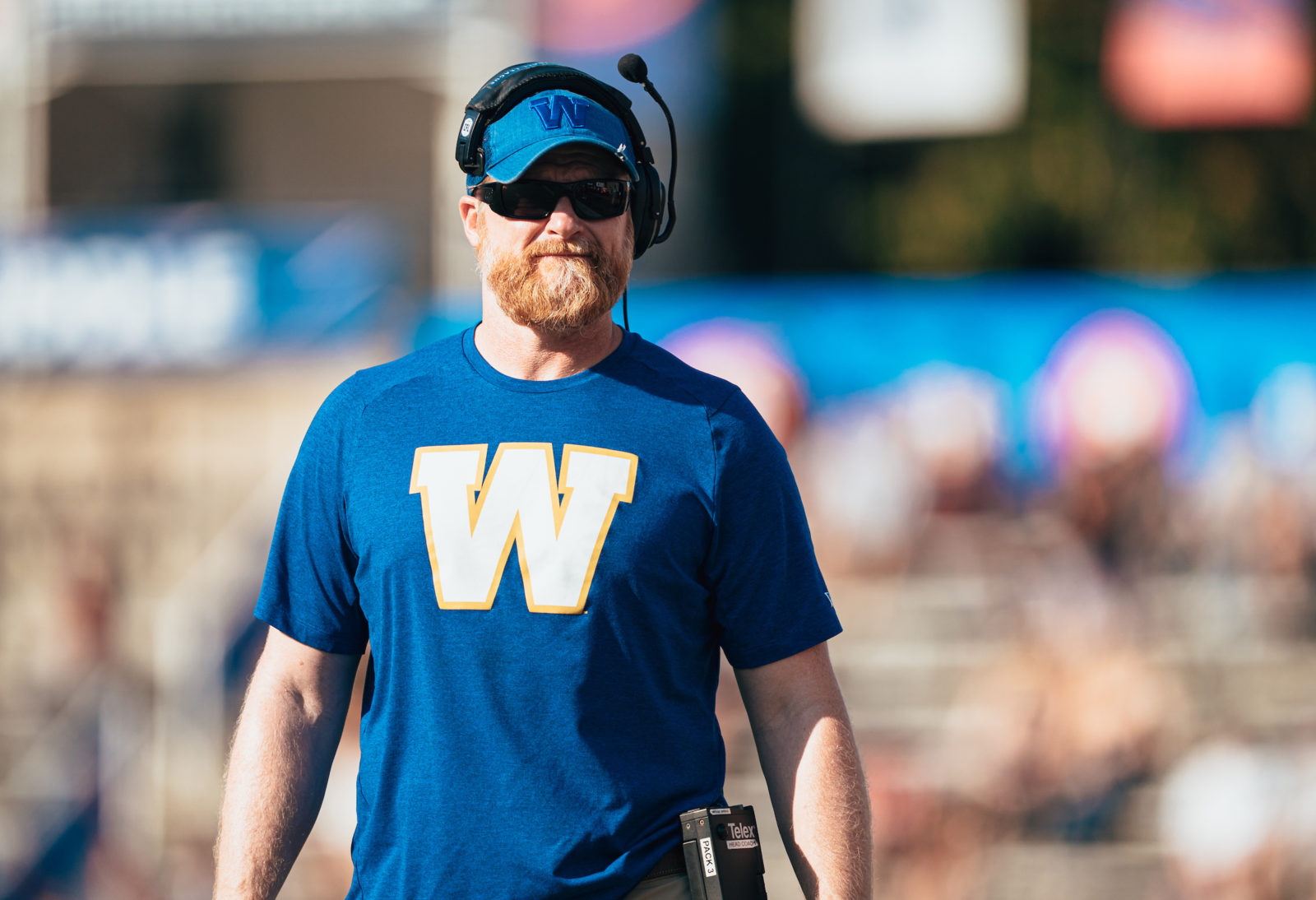 It’s a commandment at the Winnipeg Blue Bombers clubhouse on 315 Chancellor Matheson Road: thou shall flush wins and losses within the span of one rotation of the earth.

Celebrate the wins, absolutely. Learn from the losses, most definitely. Then move on ASAP.

Still, some results – and always the defeats – tend to linger and can’t be easily flushed. And when a team is part of largest blown lead in franchise history – a franchise that has been in existence since 1930 – well, there is more than a little residue.

It was against that backdrop that the Bombers returned to work on Tuesday in preparation for Friday’s home date against the Hamilton Tiger-Cats. Let’s just say the last few days have seen enough soul-searching to keep a team of psychiatrists busy for the rest of the calendar year.

“I’ve been in the league 20 years,” said Bombers offensive coordinator Paul LaPolice. “There are tough losses… Yes, that was a tough loss.” 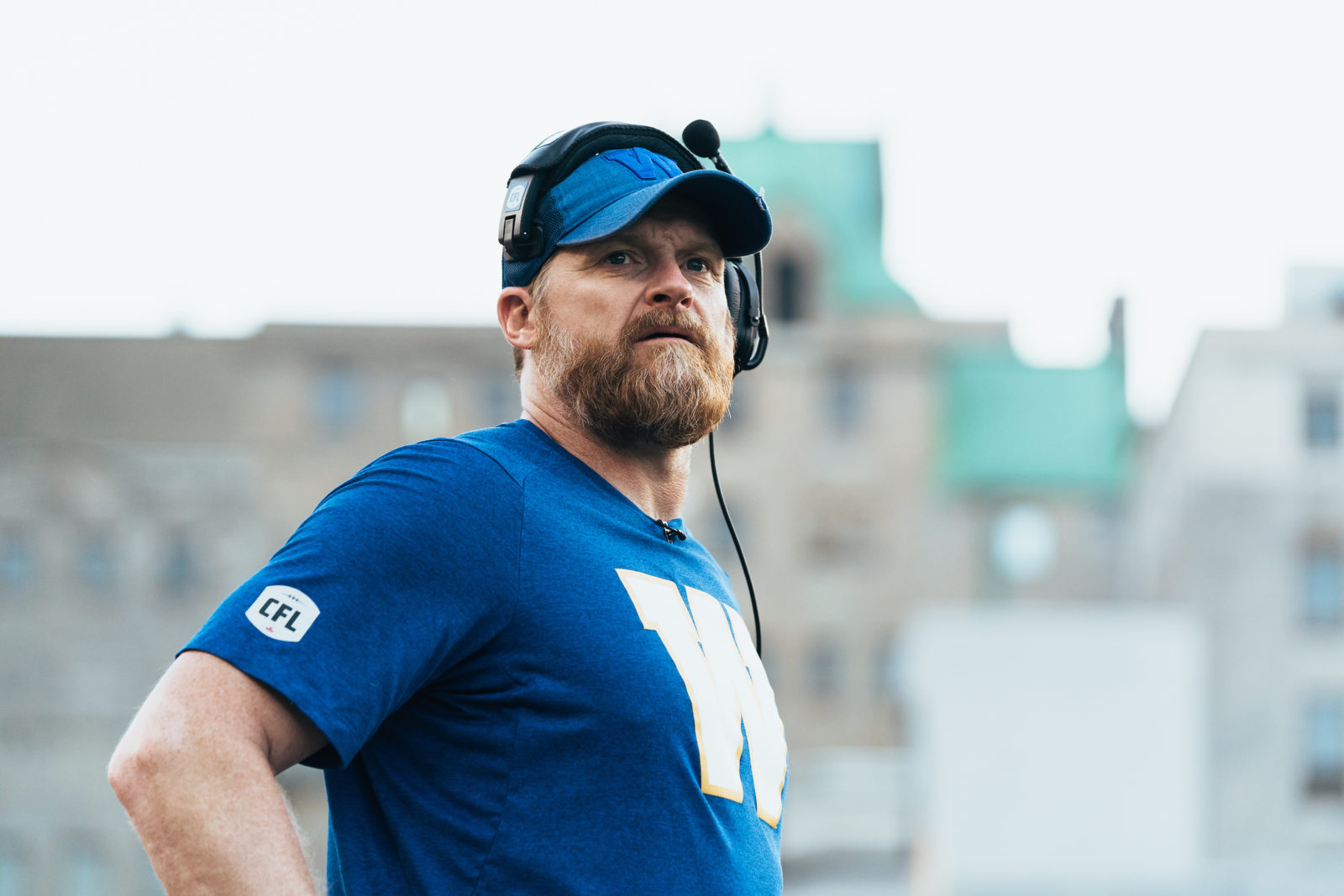 And asked if his thoughts had changed on the Montreal Meltdown after watching film, Bombers head coach Mike O’Shea was succinct:

“No, I still didn’t feel very good the next couple of days, still this morning. But we’ve got to move on from it. As difficult as it is, as I’m having trouble moving on from it, the players HAVE to because they’re the ones who have to play this next game and get it right.

“It’s not just about letting it go. It’s about recognizing it, learning from it, applying the corrections on the field and moving on from the emotion, which I think they have done.”

The meltdown was across the board on Saturday, from offence to defence to special teams as the Als rallied from a 37-17 fourth-quarter deficit for the longest comeback in their franchise history.

All that led to the subdued group that practised on Tuesday, knowing they’ve got little time to fix a problem that has cost this team wins against Toronto – in which they blew a 20-point lead, tying what was then the club record – cost them a game in Regina on Labour Day and almost hurt them in a win over Edmonton.

“If we take care of business like we did for the first 45 minutes it wouldn’t have happened, what happened in the fourth quarter.

“We dropped some balls. We missed some situations and in order for us to get where we want to be we can’t have those kinds of mistakes and we can’t have that kind of meltdown.” 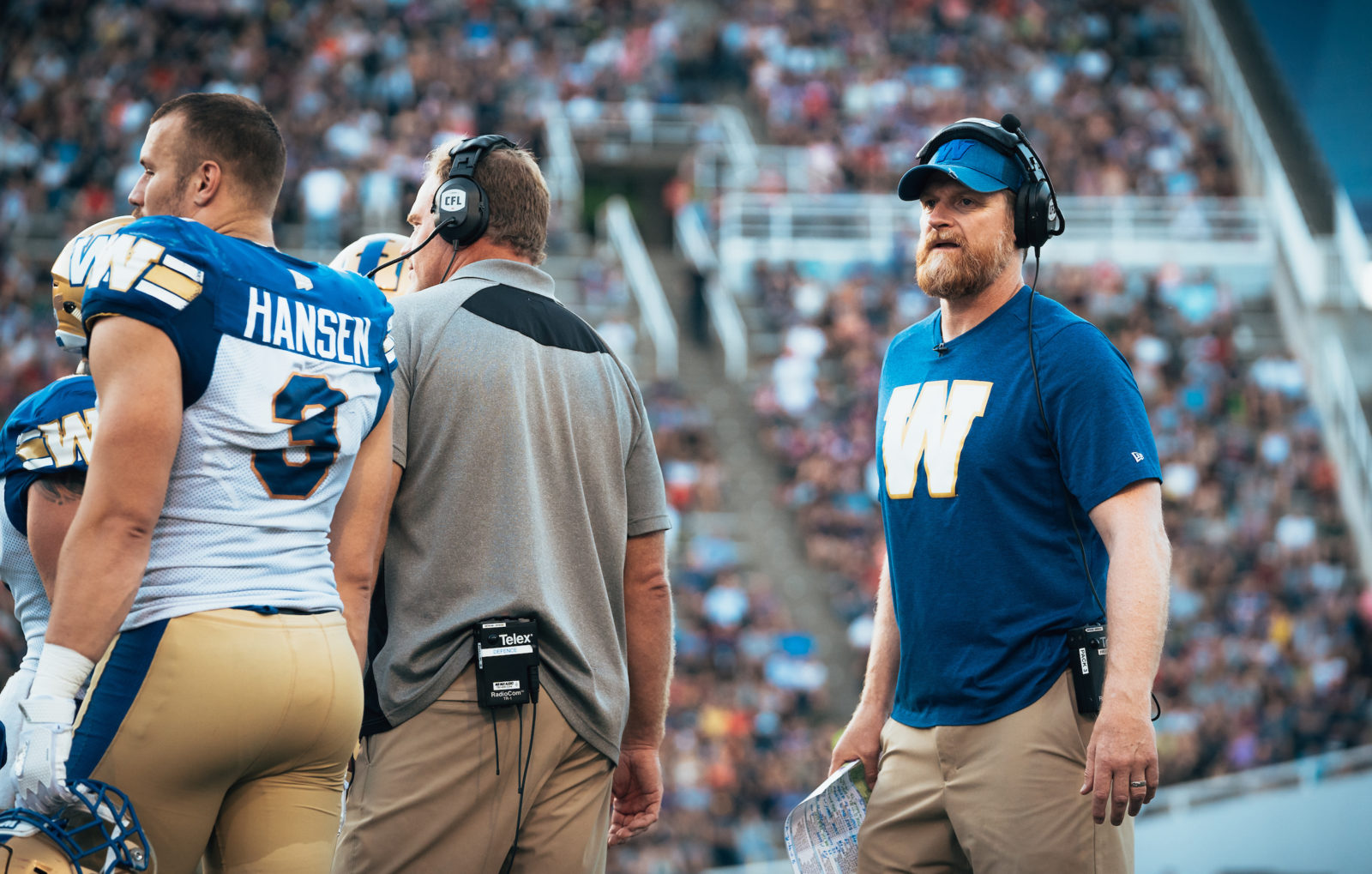 “That’s what makes it linger a little longer than it should.”

The Bombers still have their hand on the joystick here as they head into the final five games of their schedule. Friday’s game against Hamilton is followed by a visit to Saskatchewan – with the season series against the Roughriders tied 1-1 – a home date with the Als, followed by a home-and-home with the Stamps and the Bombers up 1-0 in that set.

“You’ve got to move on. It’s a quick turnaround and you have to have a thick skin in this business” said Bombers running back Andrew Harris. “You’ve got to take the lessons from that loss and just try and move forward.

“That was a tough one to be a part of, but the timing of it now… it’s not the best time to have it happen, but not the worst, either. We’ve still got five games left in the season and we can still build towards peaking at the right time and that’s at the end of the season. There’s definitely room for improvement all across the board and we’ve got to strive for that.” 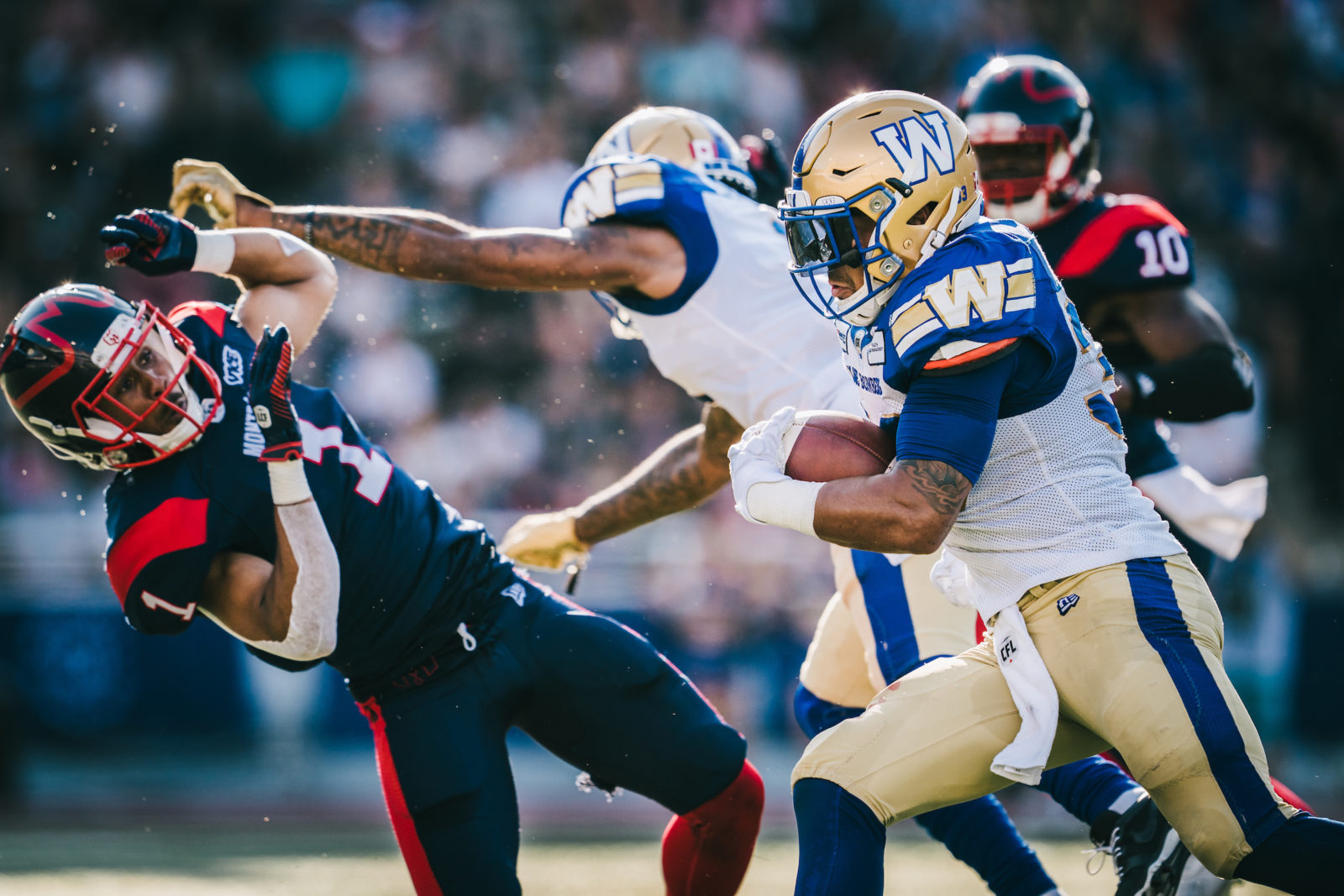 With the Bombers returning to practice Tuesday after last Saturday’s loss in Montreal, here are some other items to help get you up to speed in this week’s NEED TO KNOW…

The CFL announced Monday night that Alouettes QB Vernon Adams Jr. – who played the lead role in Montreal’s comeback – has been suspended for one game for the incident that saw him pull Adam Bighill’s helmet off after an interception while pulling him to the ground and then swinging the helmet at the linebacker’s head.

Adams Jr. was penalized on the play, but the suspension comes after the league determined the act ‘to be reckless and dangerous.’ Adams Jr. will miss this week’s game in Vancouver against the B.C. Lions.

“He reached out and apologized to me on social media, which I respect, privately,” Bighill said Tuesday. “I think that was important. At the end of the day, emotions run high in this game and obviously he would take it back if he was in that moment again. To me it’s really water under the bridge and that’s really all it can be because there’s no reason being upset about it now. It is what it is.”

Bighill admitted there was frustration that Adams Jr. hadn’t been ejected from the game – the league conceded he should have been ejected to Ted Wyman of the Winnipeg Sun –  but insisted the incident is in the rearview mirror and he and the Bombers have to be fixated on this week’s game against the Ticats.

“I stood over there and looked right at the ref who looked right at the incident and saw it,” said Bighill. “Immediately I know that’s an ejectable offence… the fact that it isn’t taken care of right away is frustrating, right? But at the end of the day it is what it is and you can’t change things.

“He came back and played a great game. He earned that win. You’ve got to live with it. You can’t complain about those things.”

And as much as Bighill and the Bombers defenders are lamenting the plays they missed on the field, particularly in the fourth quarter, they are also tipping their hat to the Montreal QB.

“He was making some under pressure throws in some great spots against man coverage,” said Bighill. “You’ve got to give a quarterback props for doing that, standing in there and making tough throws and taking shots while doing it.

“We know we’d do some things differently coverage-wise if we were to do it again and fix a few things technique and assignment-wise, but at the end of the day you’ve just got to give a guy credit who can make those throws. He obviously did a great job.”

Bombers DE Jackson Jeffcoat has finished his stint on the six-game injured list and is cleared to return to action. Asked if he’ll suit up Friday, O’Shea said ‘We’ll see.’ Jeffcoat was working with the starting defence on Tuesday as Craig Roh was a spectator.

Bombers RB Andrew Harris was named one of the CFL’s Top Performers for his work in the Week 15 loss to Als. Harris rushed 12 times for 76 yards and added five catches for 112 yards – the fifth time in his career he has eclipsed the century mark as a receiver in a game and second as a Bomber.

It was the third time Harris has been recognized this season, as he was also honoured for his work in Week 1 and Week 5.

The Bombers released RB Larry Rose III and DB Chris Humes on Tuesday and also added six players as part of the CFL’s practice roster expansion that allows teams to look at talent during a month-long window.