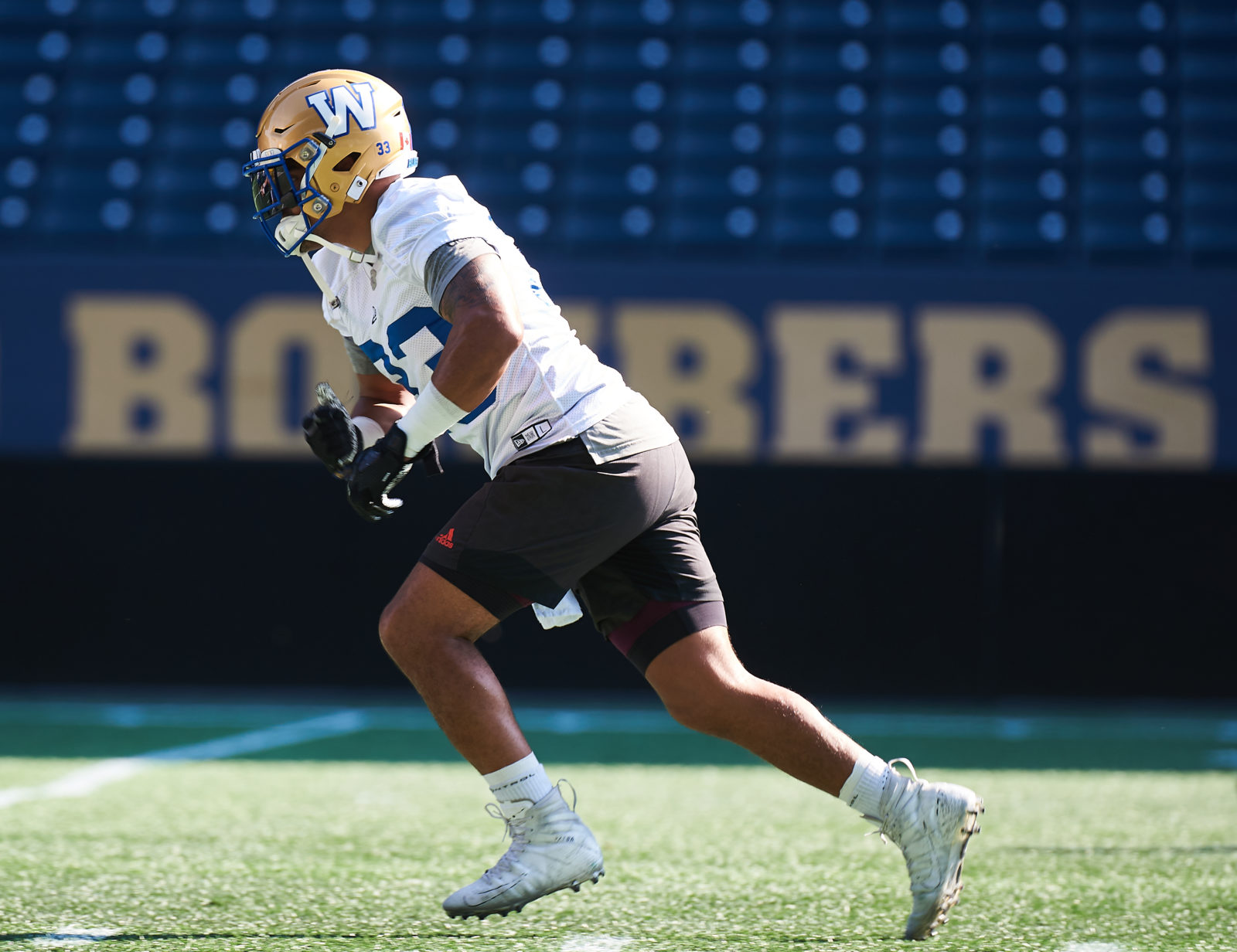 There’s never been any real scientific method available to quantify the heat emanating from the inferno raging in the belly of Andrew Harris or, for that matter, the size of the proverbial chip he carries on his shoulder.

Let’s just say the Winnipeg Blue Bombers running back has never had difficulty finding any number of motivational sources during a 10-year Canadian Football League career that has taken him from long-shot kid from the junior ranks to an all-star homegrown starting tailback.

All that said, the Harris that returned to practice this week following a two-game suspension for using a banned substance has been noticeably different. The occasional smiles and laughter were gone and replaced by something else that might be simply described as… anger.

“I just feel pissed off,” began Harris in a chat with bluebombers.com on Thursday. “I’m pissed off I had to miss out. I’m pissed off this happened to me. I’m angry with the fact I’m in this situation. This whole experience and the things I’ve seen and heard, it just bugs me.

“Now, even with all the tests I’ve had in the past and the fact it was a small trace found people are thinking this is possible? It’s not like I’m trying to prove myself or I feel the need to prove myself, but it’s like now I just want to shut people up.” 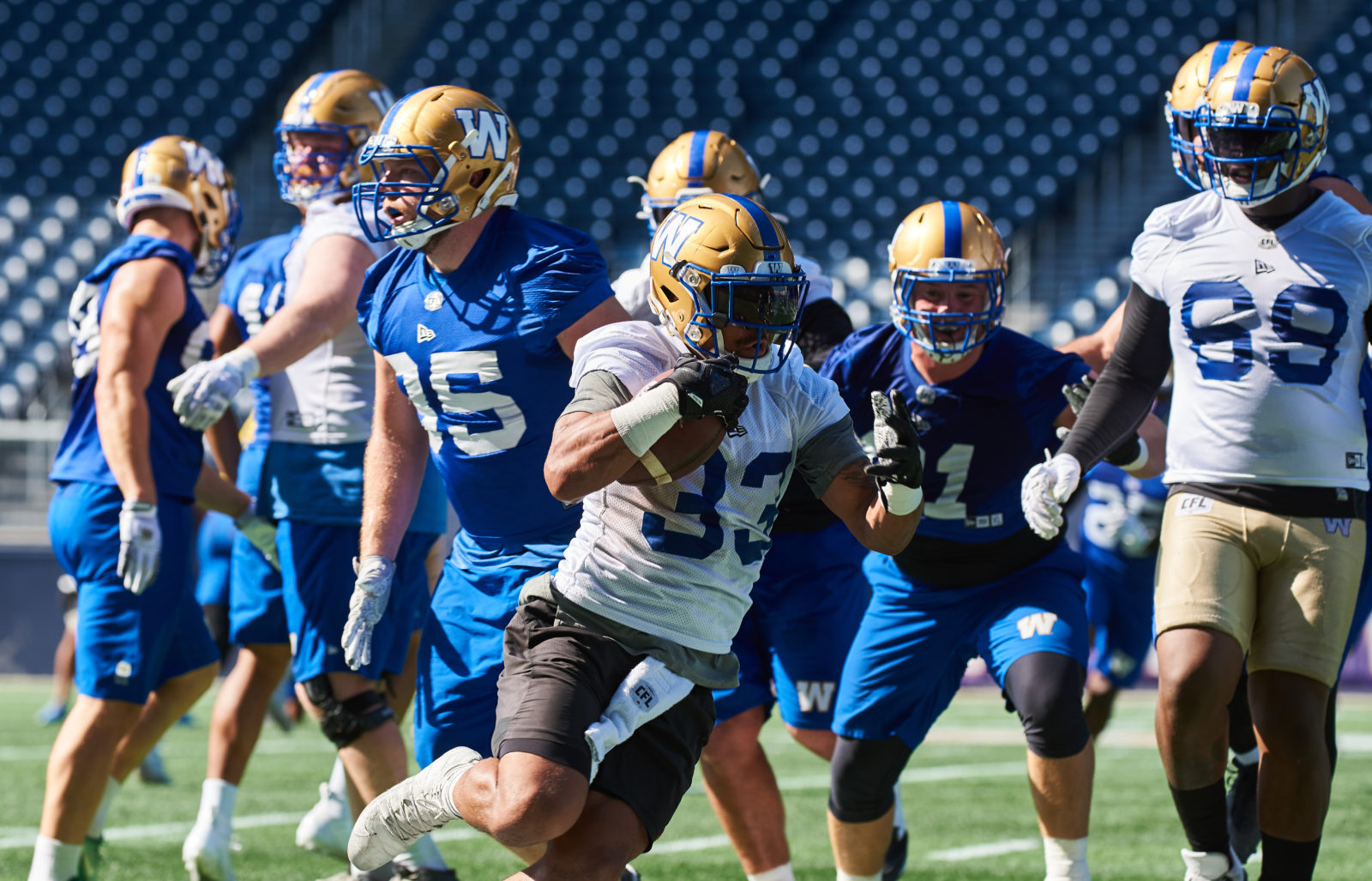 Just to briefly recap, Harris was suspended for two games in late August after a July 12th random drug test revealed trace amounts of a substance called Metandieonone – just 10 days after another test had come back clean.

The whole experience has put Harris through an emotional wringer, from the shock of being told he had tested positive, to disappointment, to embarrassment and frustration. Earlier this week Harris said he had the product, purchased at a local retailer, shipped away to determine if it was contaminated – a swing for the fences he admitted would be like finding a needle in a haystack.

In the meantime, all those emotions – some as exposed as raw nerves, others bottled up – will now be channelled into the final third of the regular season and the playoffs for Harris, beginning with Saturday’s game in Montreal against the Alouettes.

“It’s crazy, because with as much motivation and as much fire I had before, this is just adding to all those things that got me to where I’m at,” Harris said. “This is another kick in the ass that, ‘OK, I still have to prove myself.’ Again, I don’t feel like I need to, but it’s motivating me.

“Before, earlier in my career when I was just trying to make the team or become an impact player it was because I was Canadian. Then it’s because you’re older or you go to a new team and people are saying, ‘Ahh, they didn’t want him because he’s probably done.’ There’s always been something.

“People are still going to talk and say what they want to say but, again, I just want to shut people up now. The trace amount and the number of times I’ve been tested show this wasn’t intentional, but this has happened. I just want people to know I’m all real, this is natural. This is my opportunity for me to show that.” 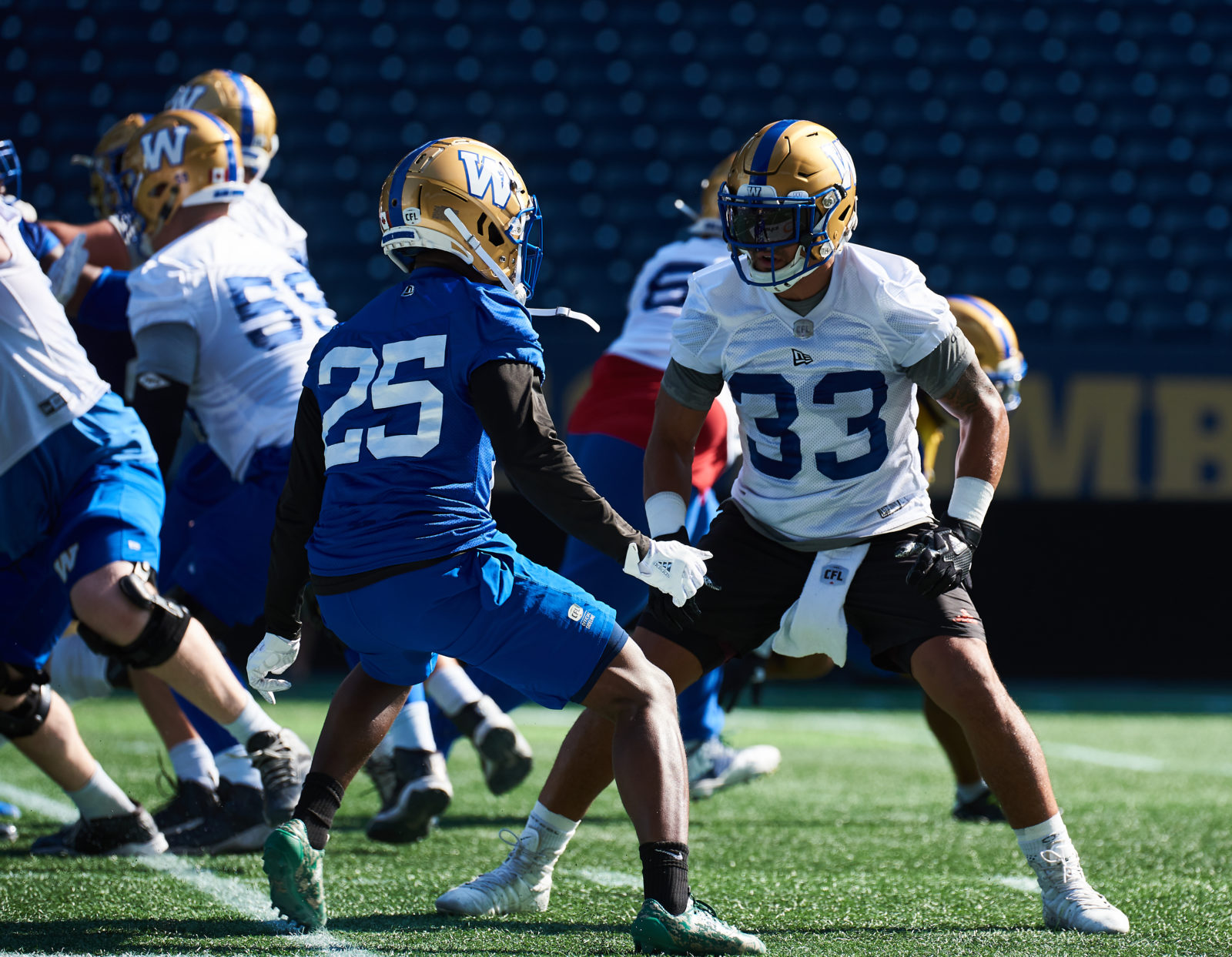 Harris said he has been touched by the number of teammates, fans and friends who quickly lined up in his support once the suspension became public. But he’s also been hardened by the other side of that, too.

“No one really understands what I’ve gone through or how hard I’ve had to work to get to where I’m at,” he said. “That’s the disappointing side of all this that pisses me off the most. This is a serious thing, but there are facts that come along with it that show it’s not intentional and yet people still want to throw you down or put you down.

“Negative news just travels so much faster and people want to comment about that so much more,” added Harris. “It’s the world we live in now and it’s sad. It showed a lot of true colours… people are nice to me or smile to my face and then have an opportunity to comment on something, they took full advantage of it. To me it was a big learning experience and it opened my eyes to this world, to this business and how quickly people will take the opportunity to put someone else down.”

Harris continues to lead the CFL in rushing, even with the two-game suspension. And with a solid final third of the season he could become the first Bomber to win the rushing title for three straight years.

He was very much a Most Outstanding Player candidate and the front-runner for another Most Outstanding Canadian Player award before the suspension, but recent media reports suggests that is in serious jeopardy now, a notion Harris is admittedly having difficulty trying to understand.

“Look at the facts… it wasn’t like the found a massive amount,” he said, when asked about the suspension’s impact on his eligibility for awards. “I got tested earlier in the season and there was nothing and then 10 days later there’s a small trace. I’ll be tested for the rest of the season and there’s not going to be anything.

“It was one game where I had this trace in my system and it was probably my worst game of the year, too. It was the game against Ottawa (14 carries for 63 yards).

“But I’m just going to go forward now and try and play my best football in the next six weeks and help the team win. Hopefully I still have an opportunity to be eligible and a part of that, but ultimately it’s all about helping the team.

“In the grand scheme of things this sucks, it’s motivating, but the most important thing is for me to try and help this team get to the Grey Cup.” 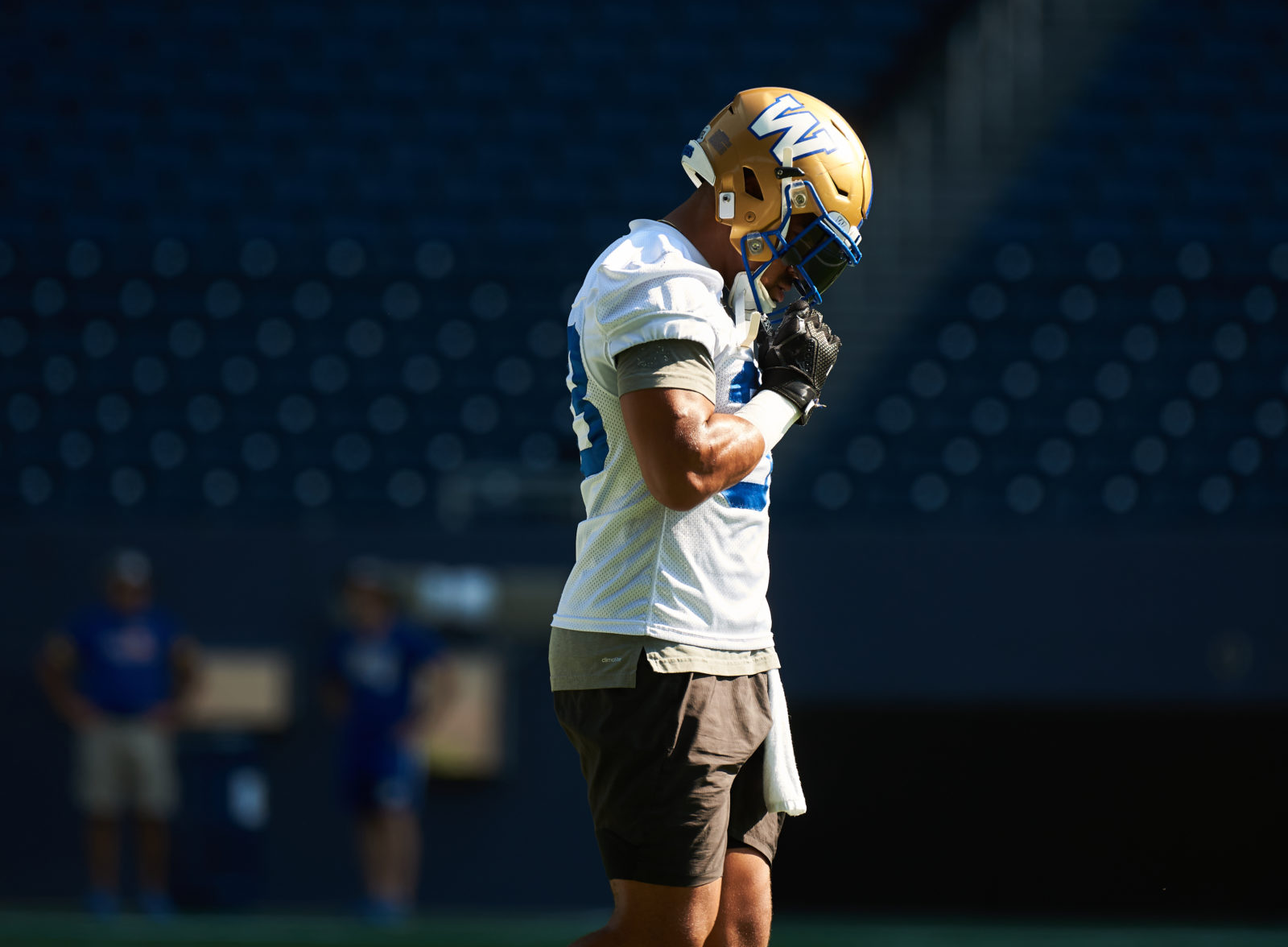 The Bombers completed final preparations for Saturday’s game in Montreal behind closed doors on Thursday. Here are today’s notes and quotes from the post-practice availability…

The Bombers got some stellar play from Johnny Augustine as the replacement for Harris during his suspension.

But welcoming Harris back to the backfield does more than just add some oomph to the ground game and the passing attack.

“Everybody’s got a ton of confidence in him,” said Bombers head coach Mike O’Shea of Harris. “He’s got so much experience. We talked about the fact that Johnny went in there and played really clean football games in terms of his execution and his knowledge of the assignments.

“Andrew, though, has the ability to make everybody right. He knows everything so well he can fix a lot of things. He sees it before it’s happening and he communicates extremely well. (That’s) pre-snap, post-snap… he’s seen and done it all. And then you add the fact he’s such a relentless runner and catches the ball extremely well out of the backfield, he understands how to run routes… these are all good things that come with experience also. Johnny hasn’t had that opportunity to gain that experience, but with that experience, there’s a comfort level guys have around (Harris) because they know he can fix everything.”

The Bombers will welcome back two receivers to their lineup with the return of Lucky Whitehead and Nic Demski. And Demski, for one, can’t wait to get back at it after missing the Banjo Bowl victory over Saskatchewan.

“It was tough,” he said. “I was a little bit banged up in the Labour Day game so it was probably just best for me to sit out the Banjo Bowl game. That was obviously tough – I wanted to be here playing against Saskatchewan in a crucial game at the time, but it’s professional football and sometimes you have to sit out a game to get healthy. I’ve had two weeks of rest, so I’m good to go now.”

The Bombers will have to make some decisions soon along their O-line, with both Pat Neufeld and Cody Speller back practising. Neufeld did take some snaps with the starters this week and O’Shea was asked about having to make those calls on who lines up where.

“Pretty soon,” he said. “We’ll make some later tonight and see where the roster ends up.”

“(Adams, Jr.) is a guy who has got great movement in the pocket and can make throws downfield. They do a lot of different things on second and long – some draws, some screens and he can move around the pocket as well, so we’re going to have a task to keep him in there. (Stanback) is a bit thicker than most CFL running backs. He’s a guy that can come down the field and still cut really well, too.”