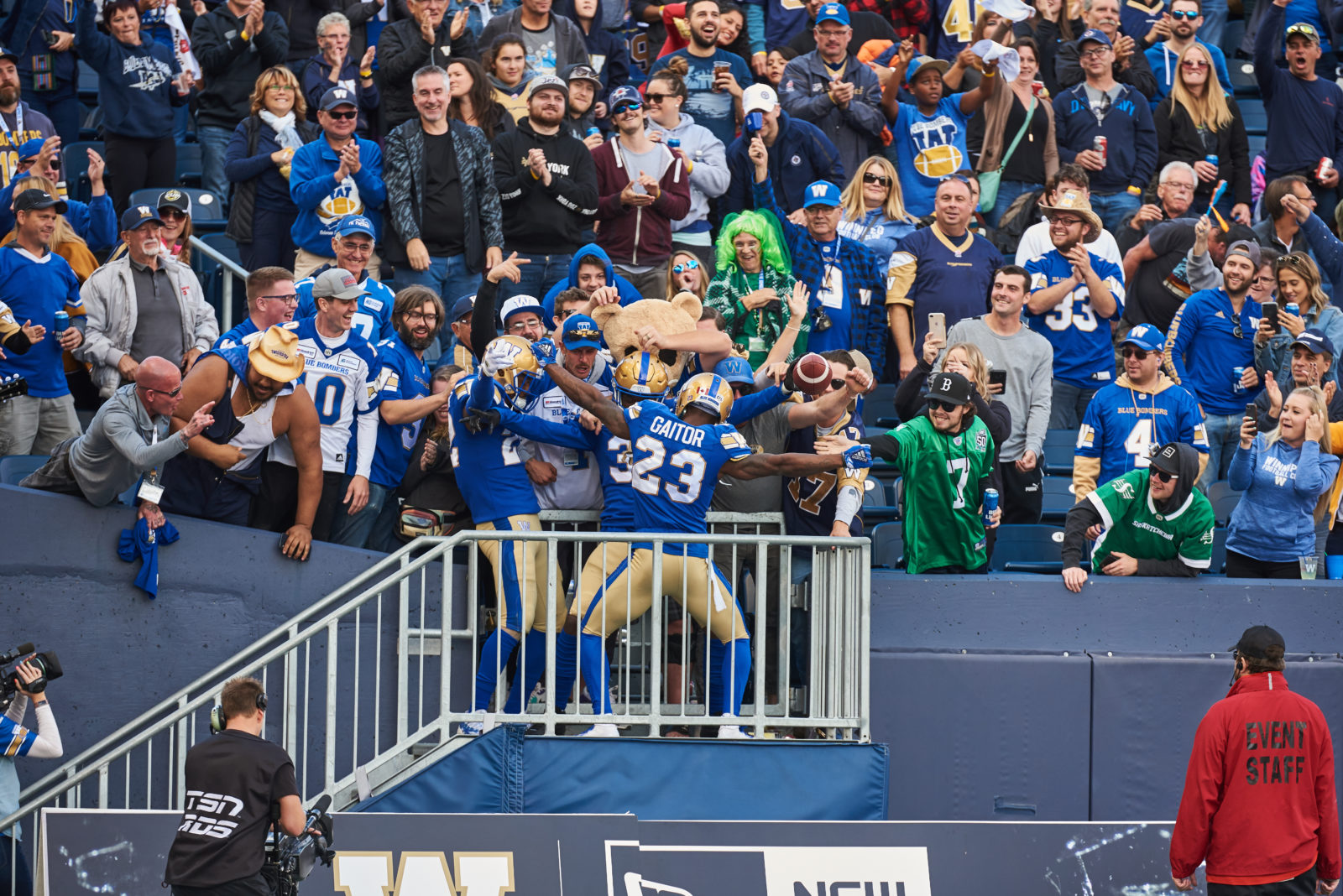 Let’s begin with this admission: What the Winnipeg Blue Bombers have done over the last few weeks is by no means unique to the Canadian Football League, to pro football, or to sports everywhere on this blue planet. It happens every week, as players get hurt and others step in and either tread water until the regulars return or play so well they – as they say in baseball – ‘Wally Pipp’ the starter.

That opening concession aside, let’s also say that if we were to rewind to around early August and suggest the Bombers would be 9-3 and in first place in the West Division following three games without starting quarterback Matt Nichols; with two-time rushing champion Andrew Harris having served a two-game suspension; with the team on its fourth different defensive halfback following injuries to Brandon Alexander, Chris Humes and Mercy Maston; with defensive end Jackson Jeffcoat having missed four games; with starting guard Pat Neufeld not having taken a snap this year and his replacement, Cody Speller, out for three games; without receivers Lucky Whitehead and Nic Demski for the Banjo Bowl, AND with Darvin Adams and Adam Bighill missing time, well – and take a moment to catch a breath here – most would have suggested the world would have spun of its axis. 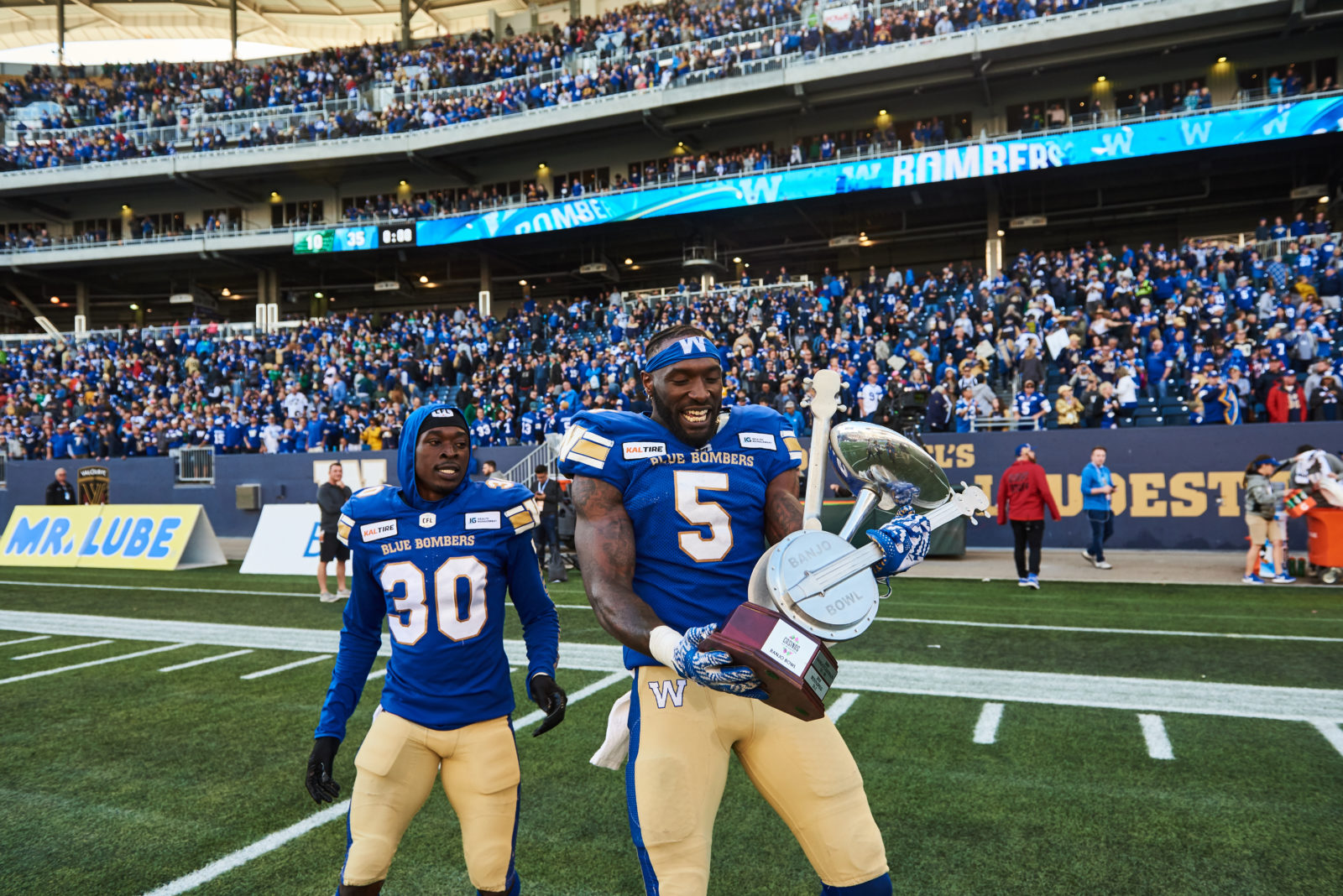 Yet the Bombers’ dominant 35-10 victory over the Saskatchewan Roughriders in the 16th annual Banjo Bowl showcased this ‘Next-Man Up’ mantra the team’s coaches and players have said over and over again to the point where it’s become cliché to those outside the locker room. Still, it fits, it works, and it might just perfectly describe the 2019 season to date.

Consider that in Saturday’s Banjo Bowl win, it was Chris Streveler rushing for two touchdowns and throwing for two more – to Johnny Augustine and Daniel Petermann, no less – it was Rasheed Bailey leading the team in catches in his first start, Marcus Rios leading in tackles, Janarion Grant scoring his third punt-return TD in five games… heck, even Thomas Miles and Maxime Latour stepped in for injured long-snapper Chad Rempel.

“It feels great, especially in a big game like this,” said Petermann, who scored his second career TD – his first coming a year ago in the Banjo Bowl, also on a pass from Streveler. “I know this is a big deal for the city, for the fans. It was good to get out, get a start, contribute and get the win.

“Everyone here, we’ve done a great job with the ‘next-man-up’ mentality. I think with a lot of our guys, with everyone really, we don’t lose a lot. We come in, we make plays. All our guys are ready. We’ve done a good job of that.”

All this isn’t to suggest the Bombers ‘other’ regulars weren’t doing their thing – Willie Jefferson and the D-line were sensational, ditto the linebacking corps and the men in the secondary, the O-line and Justin Medlock and all the foot soldiers on special teams. But what the Bombers did Saturday with their personnel issues was mammoth as the team hit the two-thirds mark of the regular season. 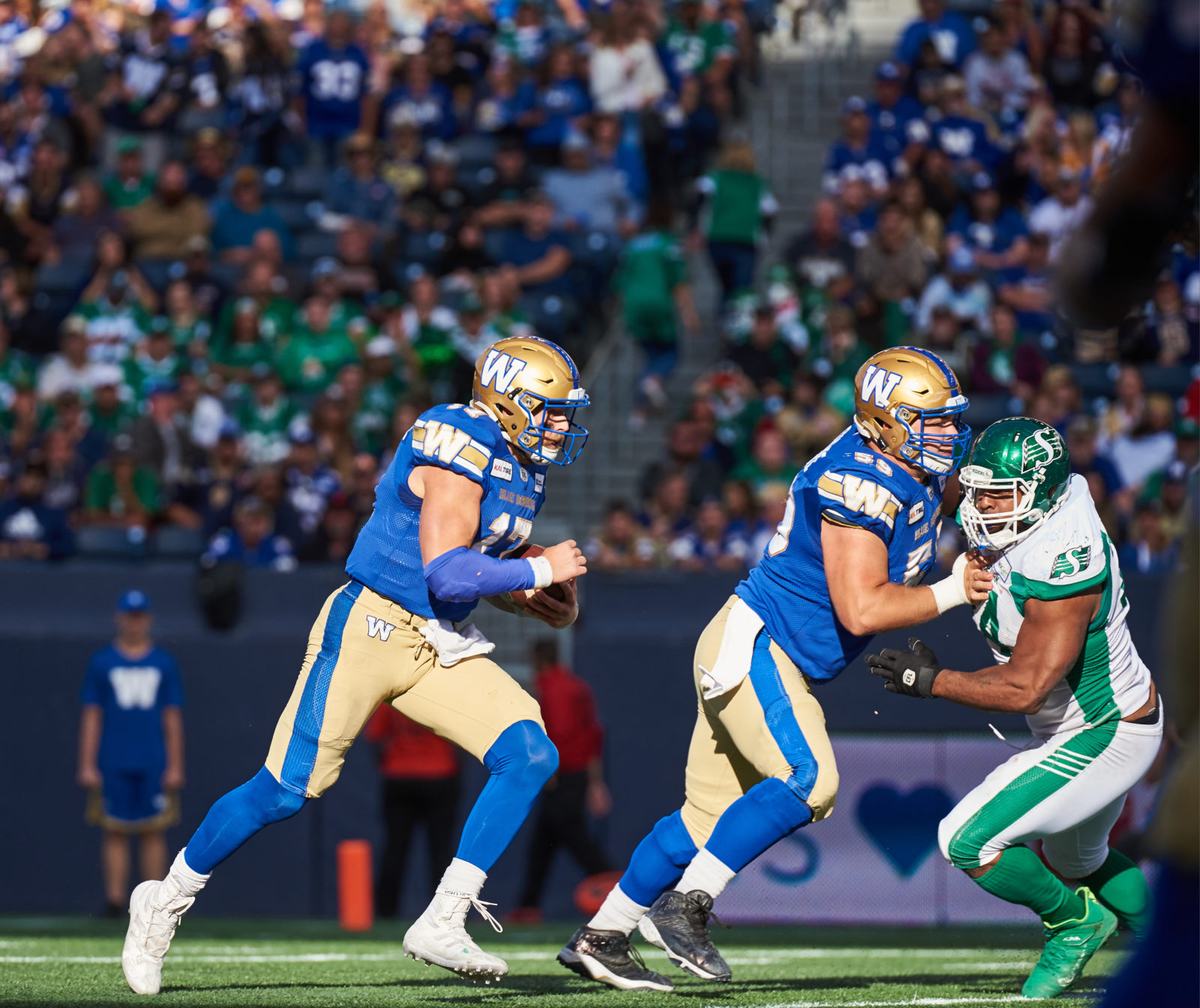 In the ultra-tight West Division, the Bombers now have a four-point cushion on the Riders and Calgary Stampeders – both 7-4 and with a game in hand – but have already captured the season series with the Edmonton Eskimos, now 6-6, are even with the Riders with another matchup coming in early October, and are up 1-0 on the Stamps with a season-ending home-and-home series looming large in the jockeying for playoff spots.

Even more important is the growing belief and evidence in the locker room that this next-man-up notion isn’t some robotic chant, but a mantra with meaning.

“I love coming to work with these guys,” said Bombers tackle Jermarcus Hardrick. “We trust Coach O’Shea. We trust the process and how even when guys aren’t running with the ones (starters) they’re treated like they’re ones when they’re on scout team.

“That’s why when the lights come on there’s no fall off. I can’t tell you how proud I am. You see Rasheed Bailey out there, Petermann, Johnny, I could name guys at every position… Drew (Desjarlais), receivers, quarterbacks… we didn’t have D-linemen, we didn’t have linebackers, DBs, we didn’t even have our long-snapper.

“Yet, here we are going into the bye in first place. There’s a good feeling in here.” 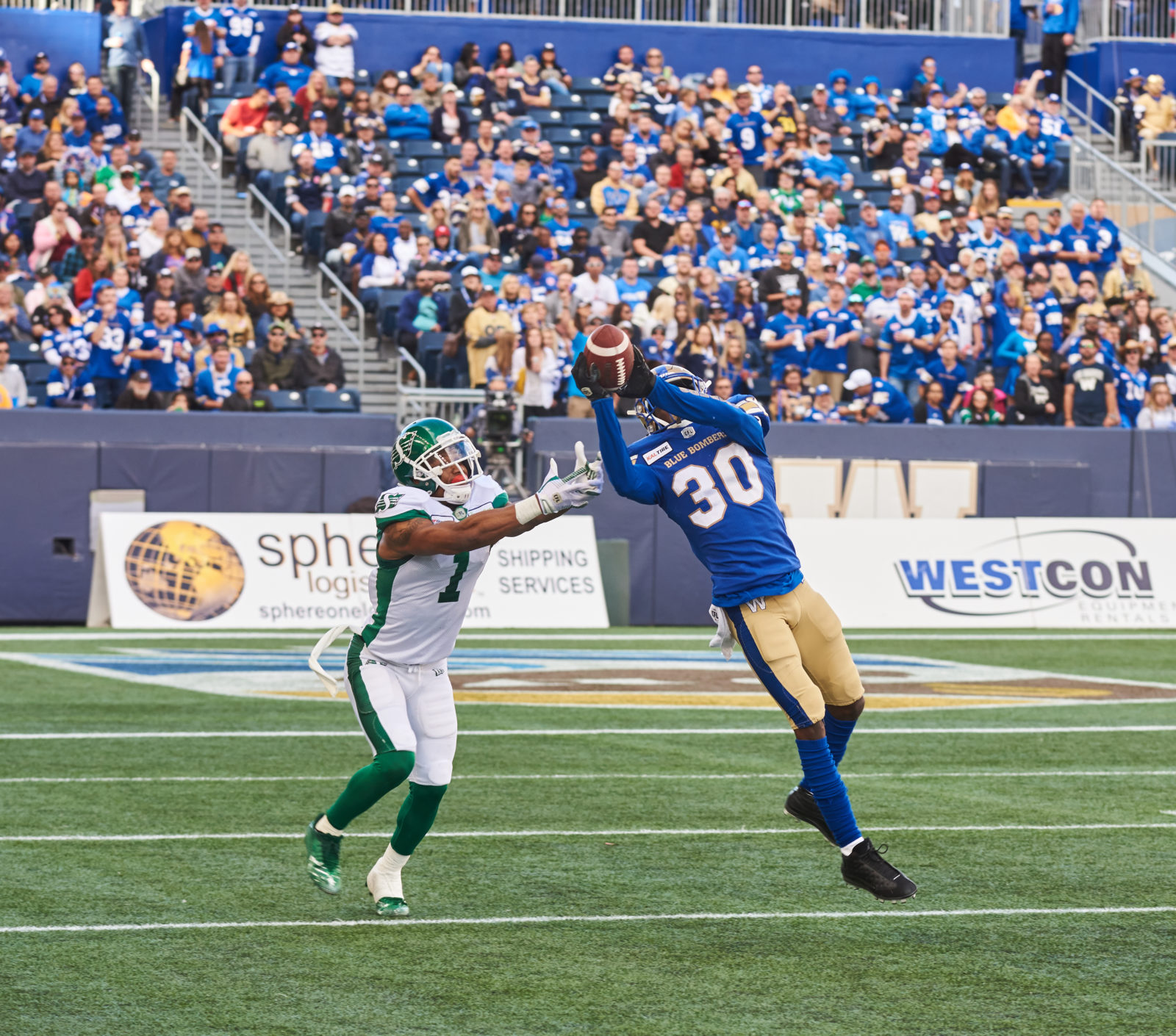 BOMBERS HEAD COACH MIKE O’SHEA ISN’T THE TYPE TO GUSH… but there was an obvious sense of pride in his voice as he addressed the media following Saturday’s win. Little wonder, as the victory over a talented Riders squad was arguably as complete and thorough as any the Bombers have had this season. And, again, it was a testament to the depth of the roster.

“These questions have come up before when we talked about our depth,” began O’Shea, “and I’m not sure if people don’t believe you, or what. I mean, we’ve been on an 11-game schedule here from the bye week in Week 2 and we’ve used damn near our whole roster. So, I’m very proud of our guys. They understand what it means to step in and honour their teammates and they understand their roles… I’ve always said when guys are in a situation where they’re not getting to play on game day, they don’t like their role. That’s fine, I don’t want guys to like that role, I want them to keep working and be ready for their opportunity.

“But they all accept the responsibility that comes with that and it showed out there on the field today.”

THERE MIGHT NOT BE A BETTER EXAMPLE OF THAT RIGHT NOW… than Rasheed Bailey, who had dressed for one game this year, but had spent most of this season on the practice roster. The Banjo Bowl was his first start since college and while he was overwhelmed with emotion before the game, he was the picture of contentment afterward.

“It didn’t even feel real,” said Bailey, while sporting a mammoth grin. “It felt good to finally be out there contributing to the team, getting first downs, feeling the crowd, getting some love. The last time I really felt that was back in college. It just felt so good to touch the rock.

“I’m really just trying to take this whole moment in. I haven’t even looked at my phone yet. We did miss one play out there and so I’m still thinking about that one play. Other than that, I played my heart out out there and I’m happy with it.”

Bailey led the Bombers with five catches for 33 yards and also ran once for 10 yards.

“It’s what I do. That’s the type of receiver I am,” he said. “I’m going to strive for that extra yard to get a first down… it just felt so good to finally do it in a meaningful game, not a preseason game. Listen, this was the real deal. That counted. We’re in first place. We just won the Banjo Bowl and I just took a thousand pictures with it. It just feels so good to know I contributed to that, not just in practice.” 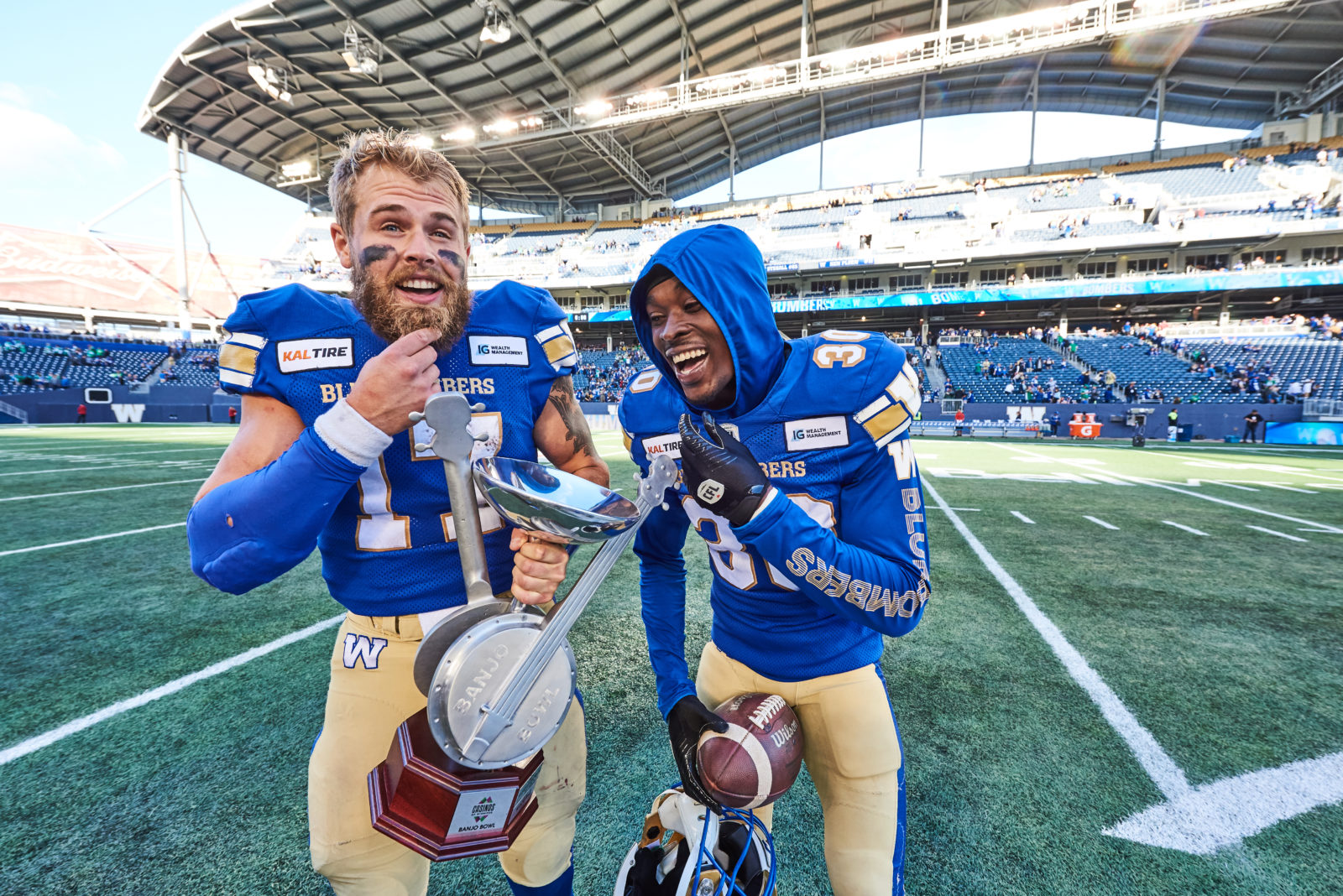 IN A GAME FULL OF HIGHLIGHTS – FOR THE BOMBERS, AT LEAST – ONE OF THE BIGGEST… was Streveler’s 21-yard run on second-and-10 in the second quarter in which he broke tackles from Micah Johnson and Cameron Judge before bouncing off others.

It happened near the Bombers sideline and had the fans at IG Field up out of their seats and hollering at full throat.

“The one play where – I don’t know if the play broke down or whatever – but he runs out of an arm tackle early and then absolute trucks, runs through a guy and just keeps on going right in front of our bench… the excitement it created on our bench was pretty powerful stuff,” said O’Shea. “There are a lot of things he did very well, but that one play where he just refused to go down… his teammates really appreciated that.”

“Any time Streveler is in the game I expect high energy, yards some way – running or passing – and I expect us to get the ball moving,” added Jermarcus Hardrick. “You don’t know what he’s doing when he’s coming in… we can hand it off in Jet (sweep), we can option off that, we can throw it off that. And as you saw today, we can be dangerous when we give him time.”

AND, FINALLY, WE POINTED THIS OUT EARLIER… but the Bombers’ long stretch between bye weeks – covering 11 games – is the longest for any CFL team this year. The club could have some intriguing roster decisions to make when it returns to prep for the next game – September 21 in Montreal against the Alouettes – but that was hardly on O’Shea’s mind in the immediate aftermath of an important win over a divisional opponent.

Asked about what elements go into a complete game like Saturday’s effort – the inquisitor admitted it was a bit of a philosophical question – O’Shea grinned and said: “You know what, I’m almost on the bye week here. I can see my couch. I can see my fridge.”

And when it was suggested there was likely a beer or two in that fridge, the Bomber boss kept grinning and added: