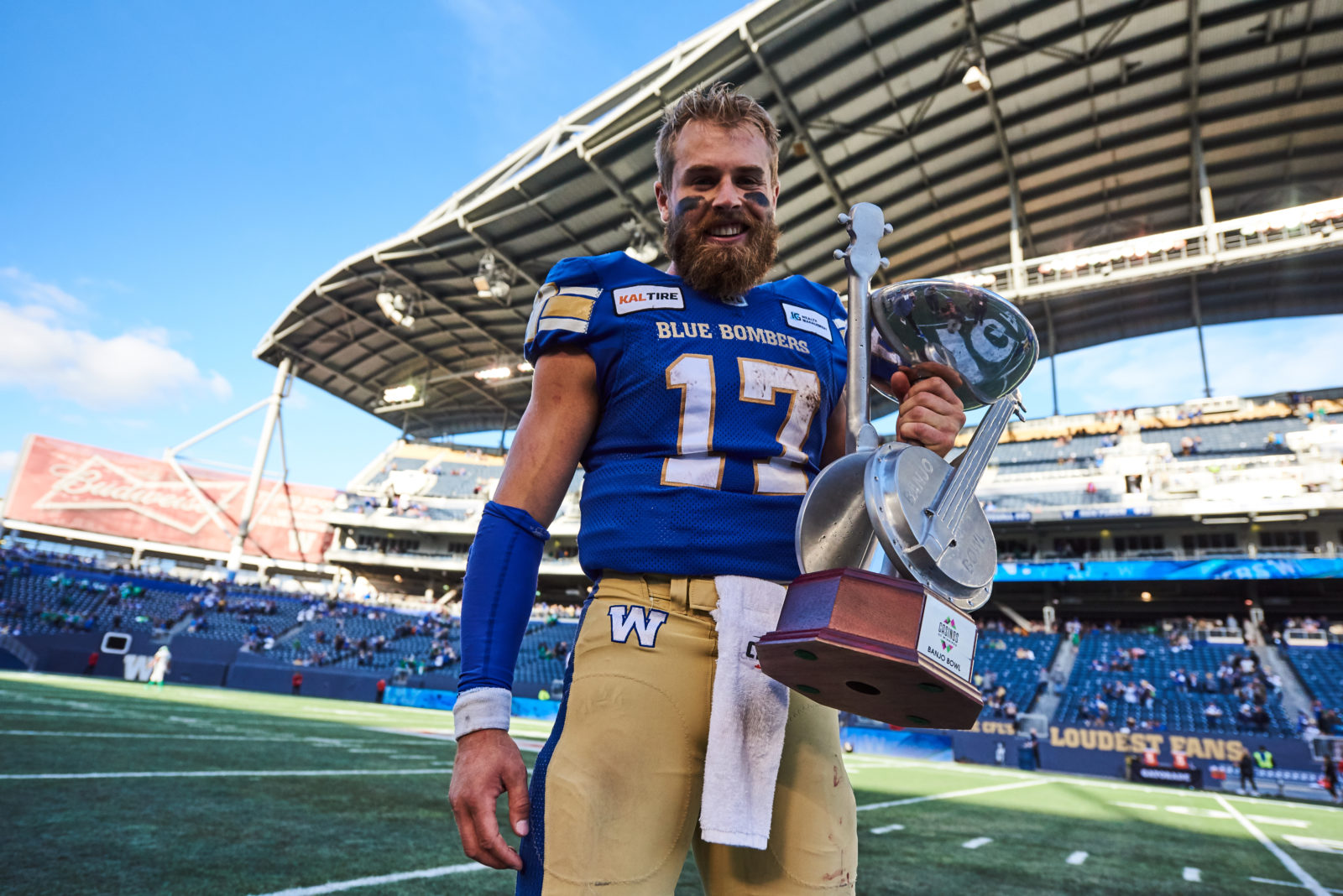 It wasn’t just a bounce back. No, this was getting up off the mat and then absolutely pulverizing an opponent with authority.

It was a beat down with a capital BEAT and a thumpin’ that should raise eyebrows across the rest of the Canadian Football League. Still stinging from last week’s 19-17 loss to the Saskatchewan Roughriders in the Labour Day Classic, the Bombers rebounded in a mammoth way Saturday, pulverizing their rivals 35-10 in front of a sold-out IG Field crowd of 33,134.

The victory not only improves the Bombers to 9-3 and drops the Riders to 7-4, it helps Winnipeg even the season series with Saskatchewan at 1-1. The two clubs meet again on October 5th in Regina. Everybody on the roster had their fingerprints all over the Bombers Banjo Bowl victory, as Chris Streveler ran for two touchdowns and passed for two more, the defence limited the Riders to just 267 yards in net offence while registering five sacks and forcing three turnovers, and Janarion Grant returned a punt 72 yards for a touchdown. 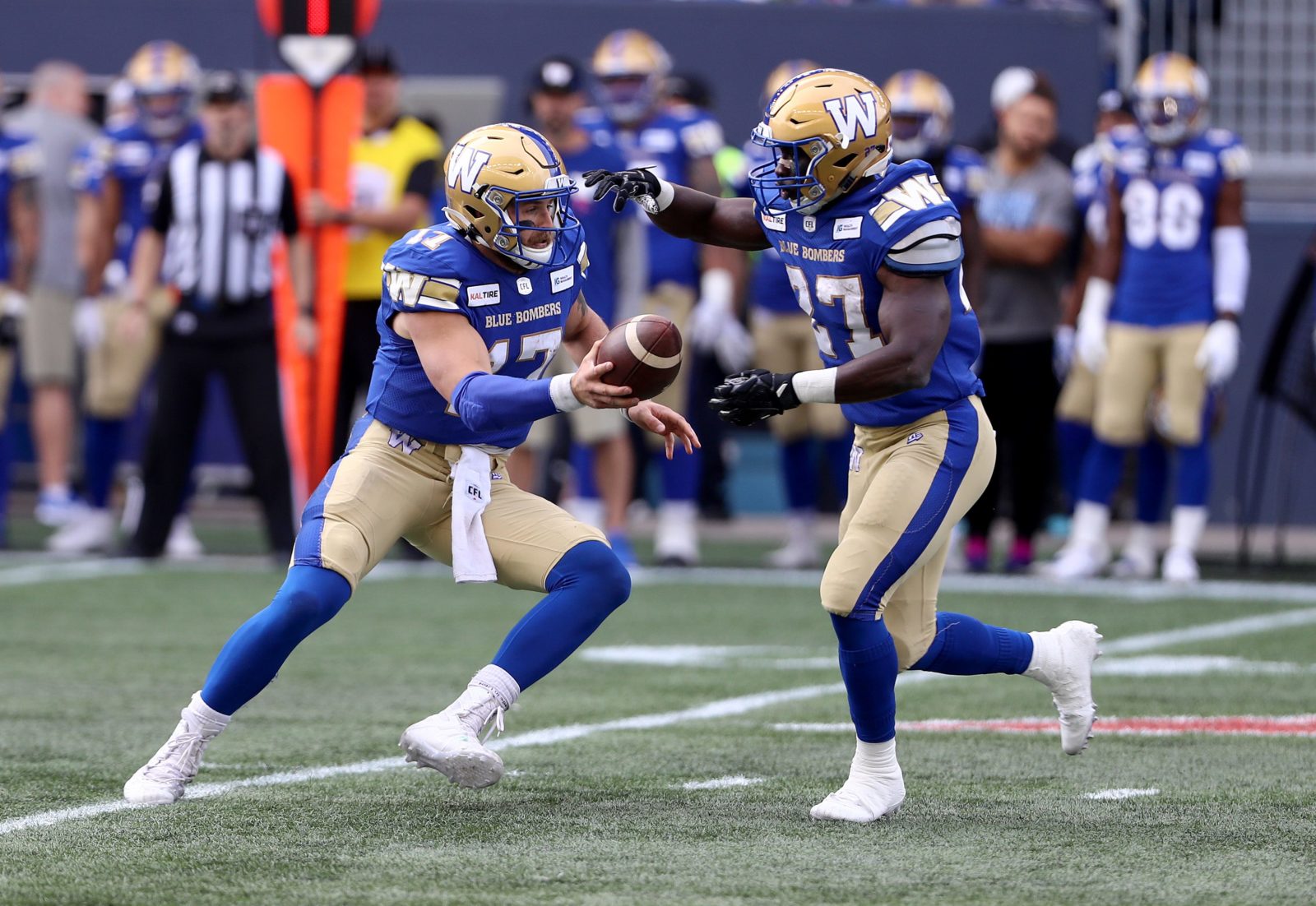 “Offence we put some drives together, defence was getting stops, special teams returns a punt… that’s about as good as it gets,” said Streveler, who was 15-of-21 for 186 yards with TD strikes to Daniel Petermann and Johnny Augustine while rushing 11 times for 70 yards and two QB-sneak TDs.

“We’re super happy with how we executed today. I don’t want to be that guy… I know there were some missed opportunities out there, but extremely happy with getting the win and how all three phases executed.”

The Bombers set the tone early, as Streveler and the offence – facing a second-and-17 from their own three-yard line on their first possession and less than a minute into the game – promptly drove the ball the length of the field for the game’s opening score, Streveler’s first of two. The 15-play drive chewed up eight minutes and 28 seconds and had the Bombers D frothing at the mouth to get out on the field and do their thing.

“We felt that the offence was giving us something and we had to step up and give them something, or the special teams something… it’s complimentary football,” said Bombers cornerback Winston Rose. “Each phase has to do their thing, so the offence getting a touchdown and using up over eight minutes of the clock… that means so much.” 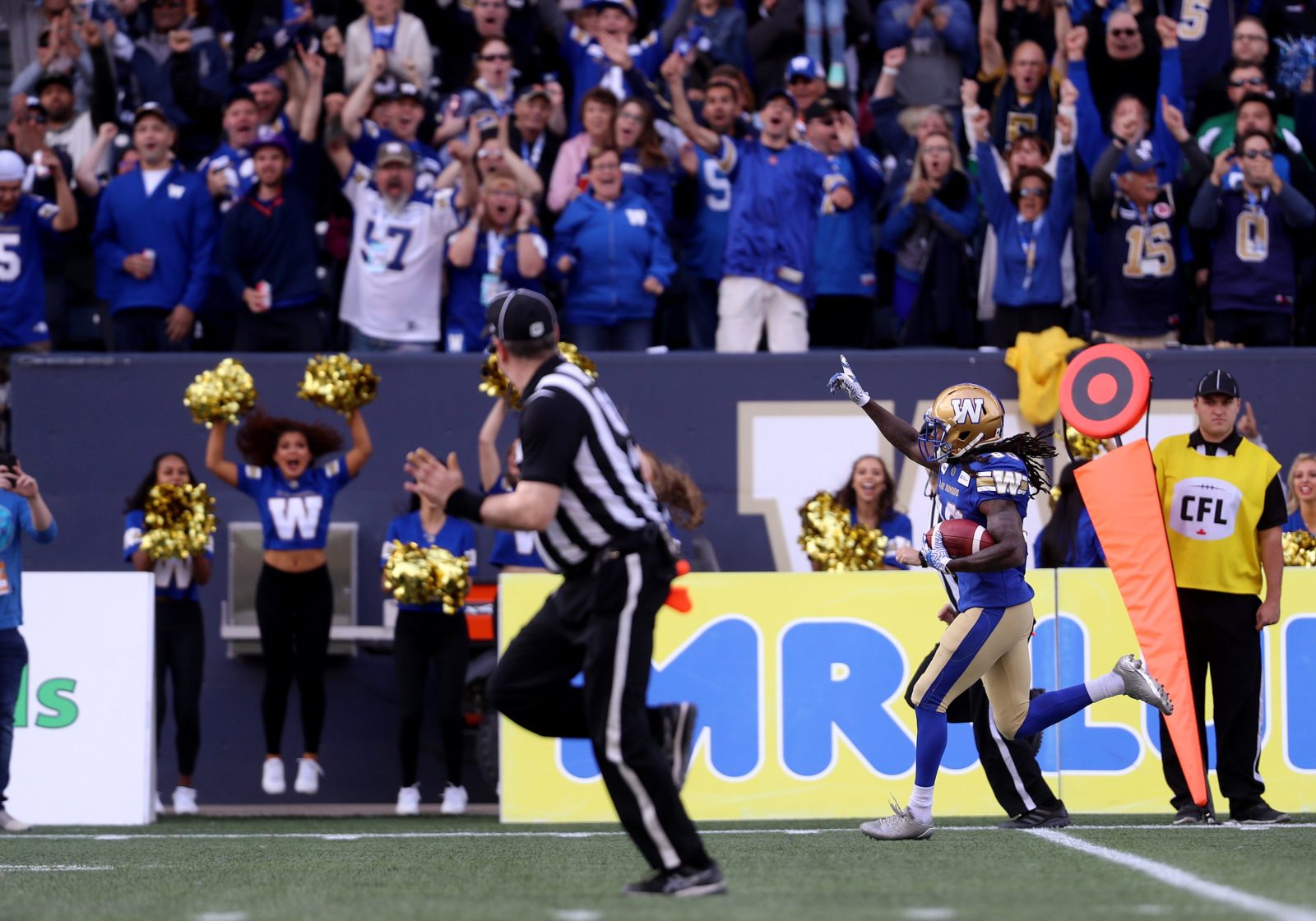 The Bombers victory came minus injured quarterback Matt Nichols, with Andrew Harris serving the second of his two-game suspension and with other regulars like Jackson Jeffcoat, Brandon Alexander, Pat Neufeld and Cody Speller joined on the injured list by Lucky Whitehead and Nic Demski – both missing their first games of the season.

“Like everybody’s been saying, we lost Andrew for two games, we lost Matt for a couple games, guys kept going down and guys kept stepping up,” said Bombers defensive end Willie Jefferson, who authored another Most Outstanding Defensive Player-type performance with three tackles, two sacks and a forced fumble.

Asked what the difference was between the Labour Day Classic loss and the Banjo Bowl win six days later, Jefferson added:

“Just the attitude. Going from Saskatchewan to here in Winnipeg and this being our home, this being our turf and not wanting to let them come in and try and beat up on us like we try to do… we didn’t even want the game to be close here.” 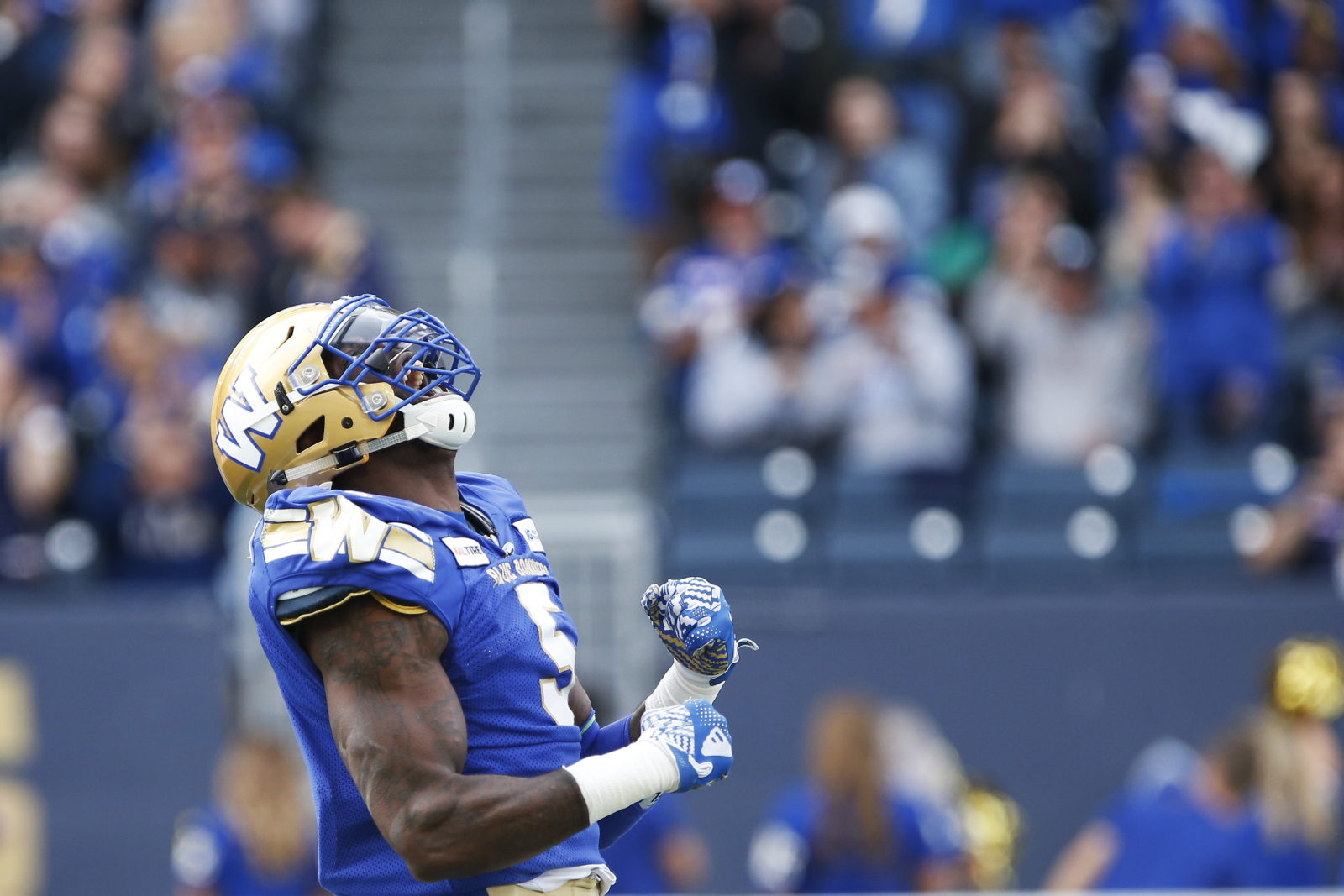 The Banjo Bowl ended a five-game run against the West Division for the Bombers, who went 4-1 with wins over Calgary, B.C, Edmonton and Saskatchewan, countered by the Labour Day Classic loss to the Riders.

The Bombers inactive player was SB Nic Demski. With Demski and SB Lucky Whitehead out, the club started Daniel Petermann at WR and moved Drew Wolitarsky inside to slotback while Rasheed Bailey made his first CFL start. Petermann finished with three catches for 33 yards and a TD; Bailey led the Bombers with five catches for 33 yards, and added a 10-yard run.

9-7:  The Bombers are now 9-7 all-time vs. the Riders in the Banjo Bowl.
9:  The victory was the Bombers ninth straight at home dating back to last year’s Banjo Bowl loss to the Riders – the longest win streak since a 10-game run across 1993-94.
20:57: Winnipeg held the ball for a whopping 20 minutes and 57 seconds in the first half in building a 28-3 lead.
8: Bombers cornerback Winston Rose intercepted his league-leading eight pass on Saturday. That’s the most interceptions by a Bomber defender since Jovon Johnson had eight in 2011. The last Bomber to hit double digits in picks, by the way, was Less Browne with 10 way back in 1991.
3: Janarion Grant’s 72-yard punt return score was his third in just five games.
138: Combined offence for Bombers RB Johnny Augustine, who rushed 16 times for 75 yards and pulled in two passes for 63 yards, including the 58-yard TD reception from Streveler.

The Bombers will now enjoy their second of three bye weeks this season, before returning to face the Alouettes in Montreal on Saturday, September 21st. Winnipeg’s stretch between bye weeks – from Week 2 until now – was the longest in the CFL this season.