“Our energy is high.” | Banjo Bowl on the horizon 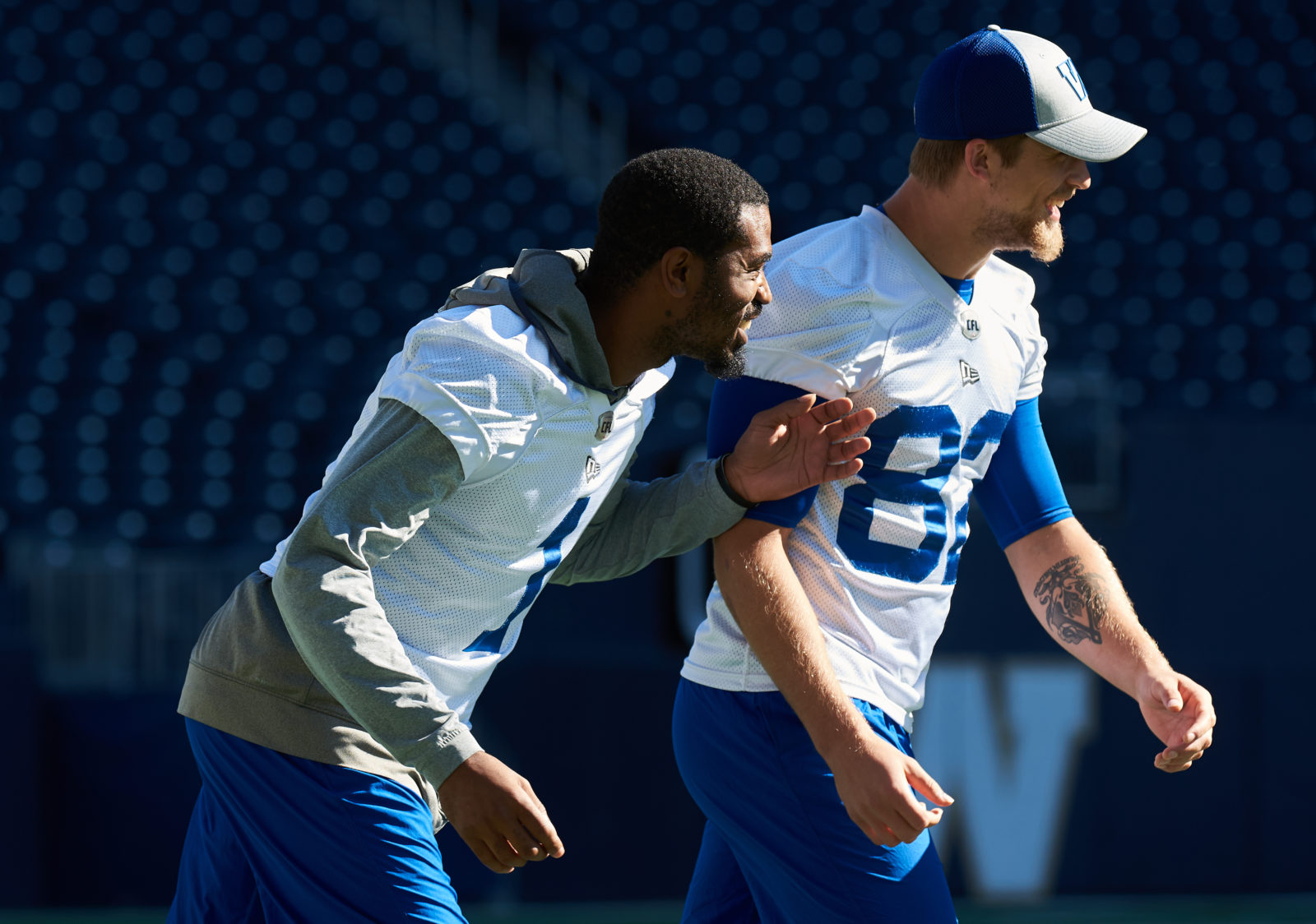 “Our energy is high.” | Banjo Bowl on the horizon

Rasheed Bailey paced back and forth around the south end zone of IG Field early Thursday afternoon in a snapshot of nervous energy meets genuine excitement.

The Winnipeg Blue Bombers slotback then stepped in front of a row of cameras and media and tried to contain his emotions while speaking about his first professional start in what has been a nomadic football career.

“I’m a little emotional,” began Bailey, his eyes welling up. “I’ve waited so long for this. It’s been like four years now, this is my fifth year being a pro, to get my first start. It literally means everything to me.

“Every last one of those guys in there knows how hard I’ve been working. They know my passion, they know my drive. God has put me in this position and I’m ready.”

The Bombers got their first up-close look at Bailey during their free agent camp in Florida this past spring. A product of the mean streets of Philadelphia, Bailey went from tiny Division III Delaware Valley University into two stints with the Philadelphia Eagles and looks from the San Diego Chargers, Cleveland Browns, Jacksonville Jaguars and Carolina Panthers. 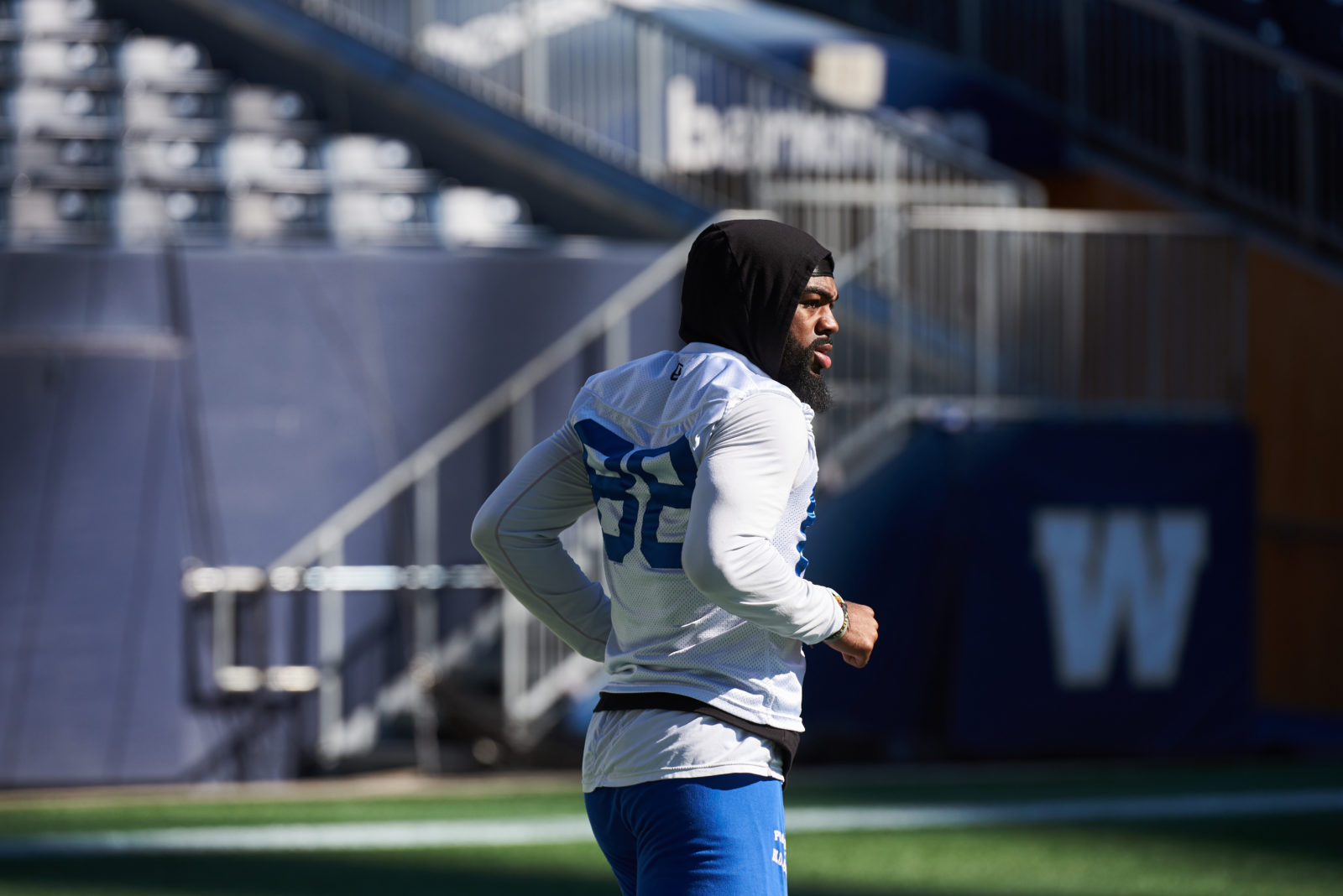 He dressed for one game as a Bomber this season – the loss in Toronto in early August – but the Banjo Bowl will be his first pro start since leaving college after the 2014 season as Delaware Valley’s all-time leading receiver.

But with Lucky Whitehead moved to the one-game injured list, opportunity is now knocking loudly for the 26 year-old.

“You see all the questions, you hear all the buzz around our team… we ready. We’re coming. And they don’t know about this guy, but tomorrow we’re all going to find out what 88 (his number) is about.”

Asked what everyone is going to find out, Bailey added:

“How much of a team guy I am. Even when I’m not playing I’m a fan, I’m a cheerleader… I’m everything. And for me to go out there and put it all out there for display, I couldn’t be more excited.” 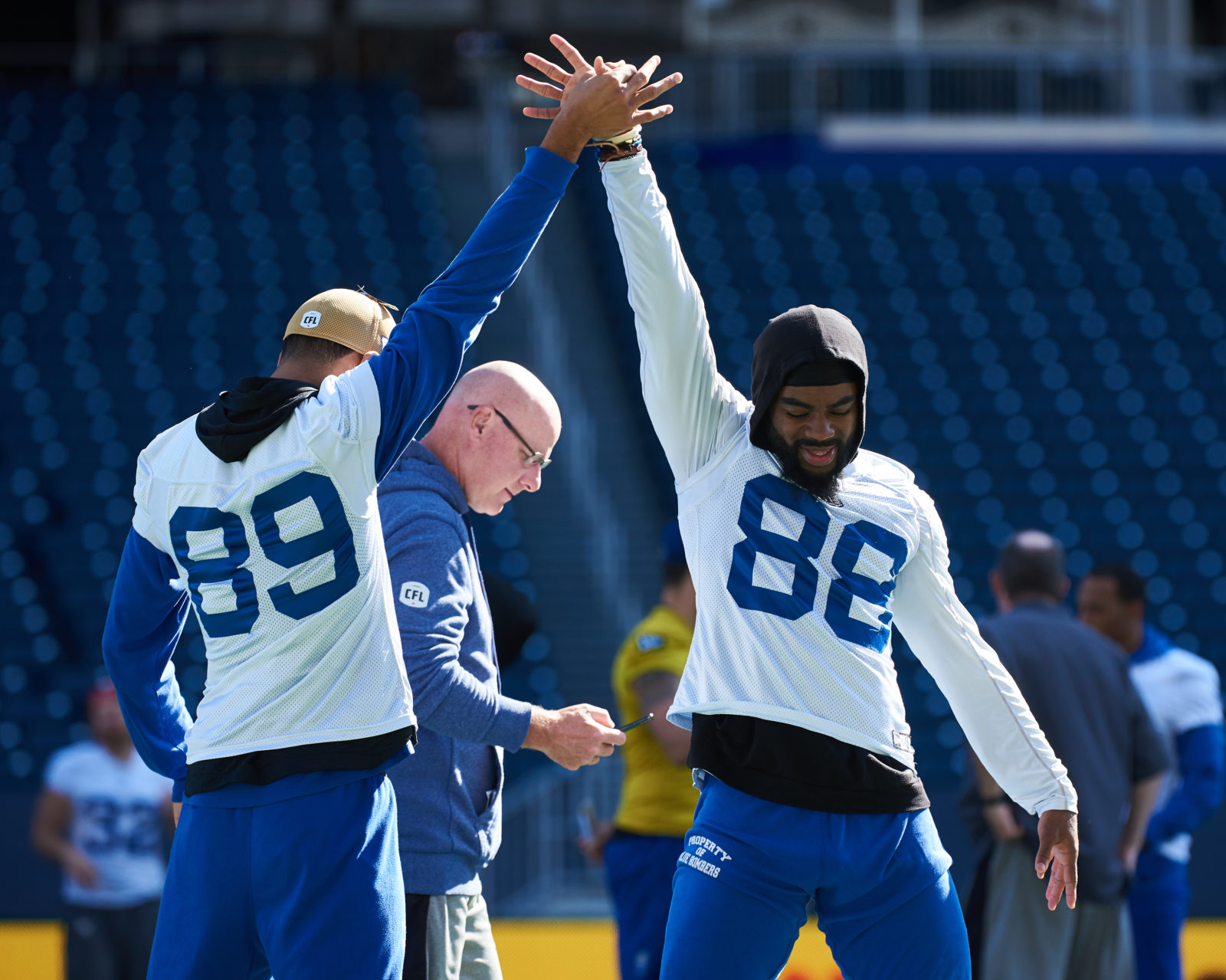 “I’m just a Division III athlete… like, c’mon. Five different NFL teams. Philly, Jacksonville, San Diego… everywhere. I woke up this morning and texted my coach (at Delaware Valley, Duke Greco) and he was the first person I let know that I’m going to be playing tomorrow and after I texted him I just felt all the emotions come to me and shed a few tears because that’s how much this game means to me. Me and him are super, super tight and if there’s anybody I go to to share my emotions with, share my impatience with, it’s him. It felt so good to see his response and all he could say was, ‘Yes!! Yes!!’ And I’m just like, ‘Yes!!’

The Bombers could have potentially two changes to their receiving corps, with Bailey filling in for Whitehead and Nic Demski a game-time decision. If Demski can’t go, expect Daniel Petermann to start at wide receiver with Drew Wolitarsky moving inside to slotback.

“It’s the same thing we’ve been saying every single week: it doesn’t change much for us,” said quarterback Chris Streveler. “We’ve had a next-man-up mentality the entire season and that doesn’t change. Guys have been preparing extremely hard this week and taking mental reps and reps in practice. So, everyone is ready to go.

“Lucky’s a great player and so is Demski… you want to have starters out there, but we’ve got a lot of guys ready to step in if called upon at every position.” 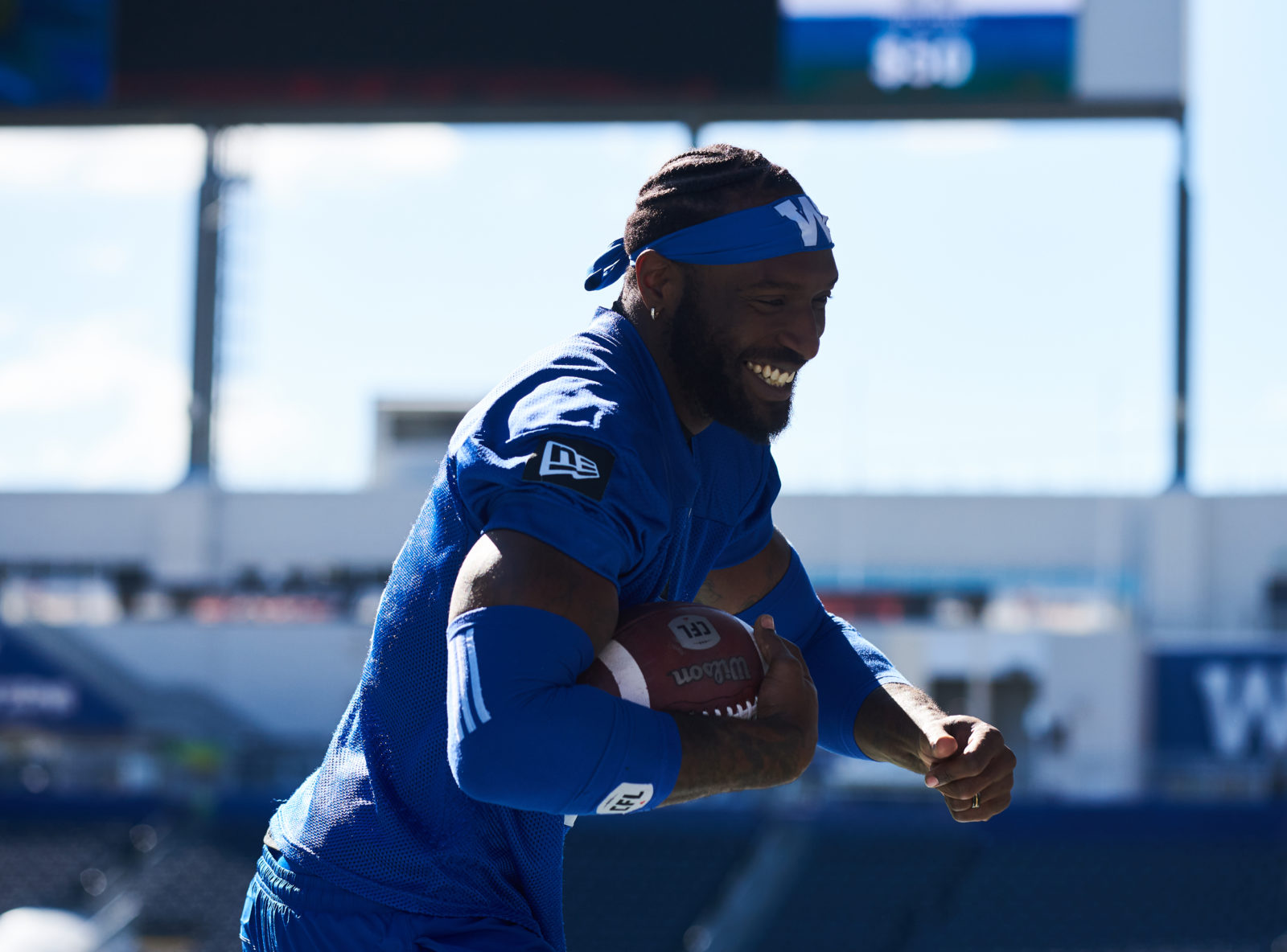 Bombers left tackle Stanley Bryant is appearing in his 150 CFL game, all starts, in Saturday’s Banjo Bowl and so his is a good perspective for what he sees about the current state of the club.

“The mood in here is great,” said Bryant. “We know we’re capable of winning games even without our key guys. Last week we all wanted to win that game, we all thought we were going to win it. But things happen. We’ve got to build off that and improve. Our energy is high. There’s no doubt in this locker room and I’m sure with the coaching staff. So, guys are ready to get rolling.”

Bryant also offered this when asked about the growth he’s seen in Chris Streveler’s game:

“I like that he’s taking control of the huddle. He’s been that leader that he’s supposed to be as the quarterback. He’s a great competitor. He’s been making plays with his legs, but also with his arm and taking advantage of the mistakes the defence makes.”

The Banjo Bowl will mark the second-consecutive start for Johnny Augustine, who rushed for almost 100 yards in last week’s loss.

“I’m approaching it the same way, just like I approached practice the week before and this week,” he said. “I’m watching tons of film and just working on little things that are going to help me with this game. I had the experience of having my first start, now I know what to correct.

“Experiencing last week definitely helped me get the feel and understanding that ‘OK, I can do this.’” 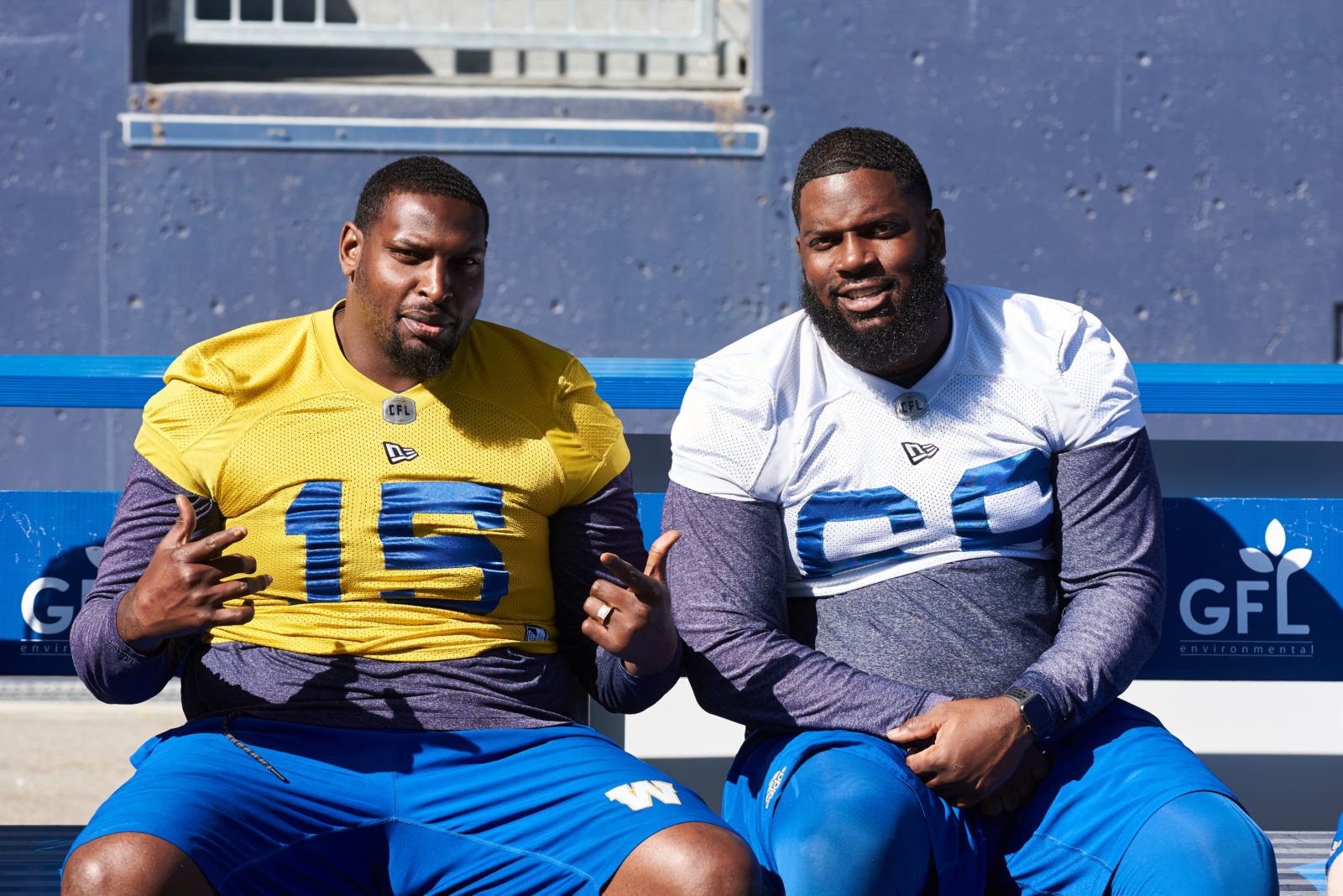 The Bombers have activated RB Larry Rose III as the back-up to Augustine and head coach Mike O’Shea offered this on the import tailback the club had in camp before releasing him:

“We liked him in training camp. The way the (CFL) Draft went (selecting Canadian Brady Oliveira) and with Johnny (Augustine) here also it didn’t play out for him to be on our team at that point.

“These guys stay in shape. He’s athletic, he’s fast, he can catch… he can do all those things you need a tailback to do. One of the things that really impressed me is every time I walked into the building or leaving the building, Larry was plunked in the same spot, the same seat, watching film. Sometimes he was out of his seat and in a very small space walking through his steps, he was taking notes, and was always extremely diligent in his preparation. He was not going to let that be the reason why he was going to miss an opportunity. You get a guy who is that invested so early in terms of making sure he knows what he’s going to do, it’s very easy to bring a guy back because that question is already answered. He already knows what he is supposed to do.”

Here’s Streveler when asked Friday if coaches have suggested he slide when running rather than put his shoulder into people:

“Coaches never really say anything about sliding. They just say to be smart and pick and choose my spots. I’ve had a couple teammates hint at… I did slide once last game and they were a little bit excited about that for me, as was I. Everyone just told me when I was playing to just be me and that’s what I try to do. If I can get out of bounds or slide or whatever, I’m going to do it. But, if not, I’m not going to.”