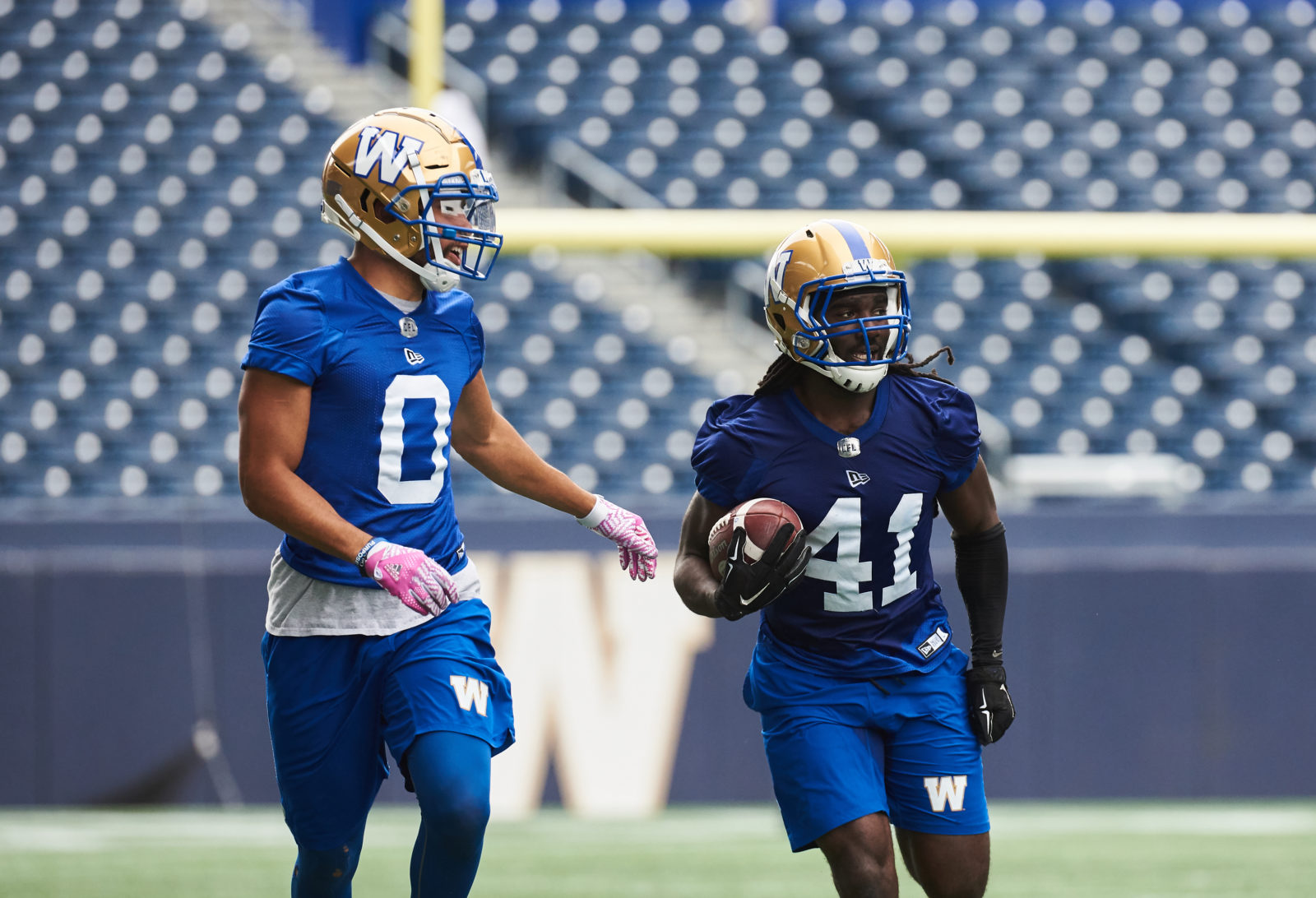 There are no do-overs, no re-serves in football. And so try as they may, a team simply can’t press stop, rewind and then erase the bad parts of a performance.

We bring this up this week as the Winnipeg Blue Bombers continued preparation for Saturday’s rematch with the Saskatchewan Roughriders and with last Sunday’s 19-17 Labour Day Classic loss in Regina still very visible in the rearview mirror.

Yes, as much as it’s constantly drilled into this team to flush the good and the bad, to treat each game as the most important because it’s the next game and so on and so on, the reality is some games – some losses – are like an open wound that just don’t heal over the course of a few days.

And the scenes from the final three minutes of the Labour Day Classic in which Cody Fajardo & Co. drove from their own five-yard line deep into Bomber territory for a last-play game-winning field goal had the Bombers still stinging well into this week.

“I’m looking forward to the rematch just because of the way the game ended,” said defensive end Willie Jefferson inside a raucous Bombers dressing room after practice Thursday. “We’re just ready to get out there and give it another shot. We were close, a little too close, and we felt we should have won at the end of the game.” 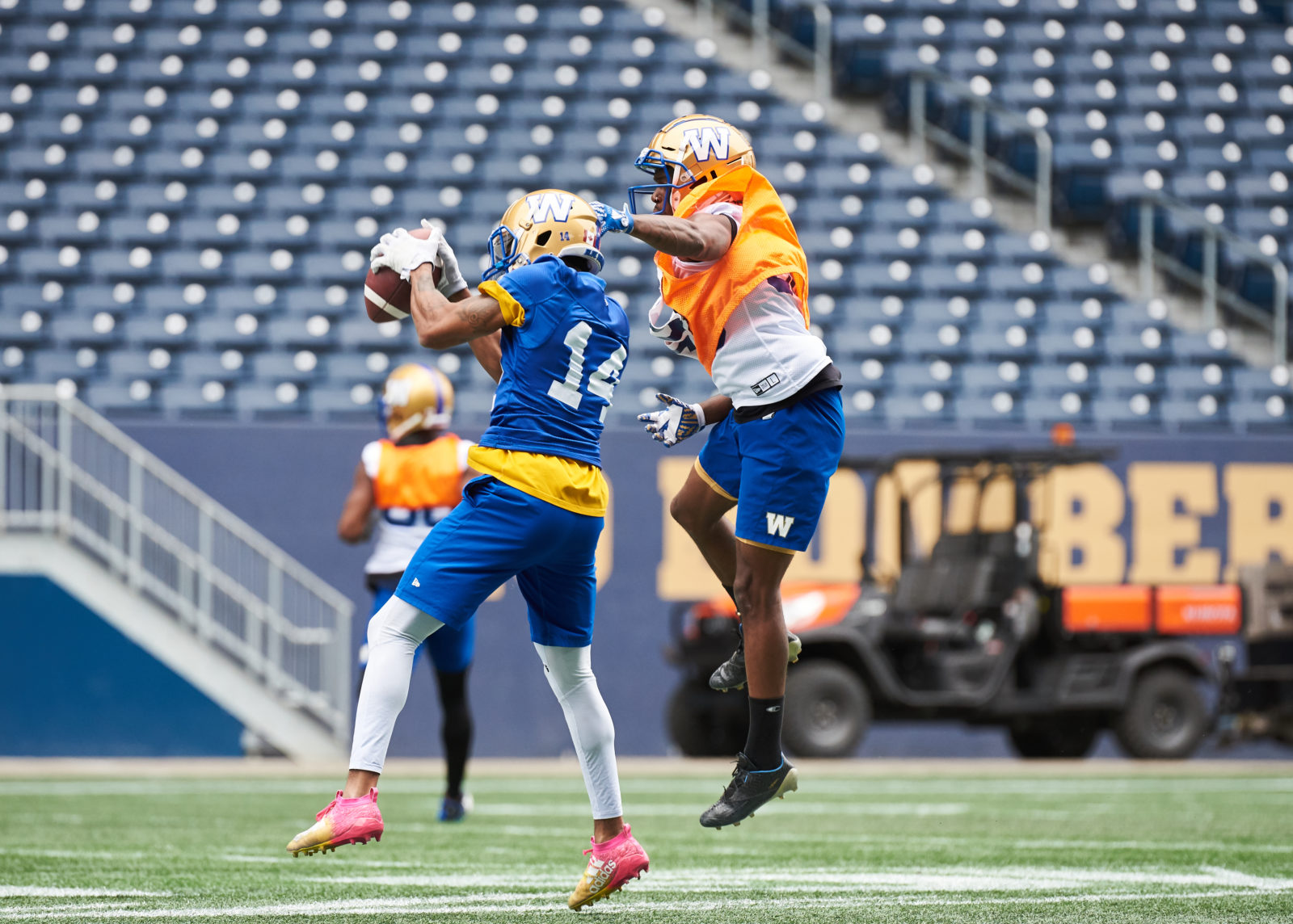 “The last three minutes is pretty much everything that we’ve been talking about since the game was over. Fighting to come back the whole game and then to get the lead and have the opportunity to shut them out at the three-minute mark but to let them drive the field and get the win… that’s one of those things that’s been sticking with everybody that was on the field for those last three minutes.

“If we can get back to that situation we want to end it the way we want to.”

The LDC loss was the latest in a series of body blows this Bombers squad has taken over the last few weeks, from the loss of quarterback Matt Nichols, to the suspension of Andrew Harris, to the surprise release of Chris Matthews. There are a number of starters still in sick bay and yet the club has still managed to tread water with a 3-3 record over the last stretch after a 5-0 start that has them atop the West Division at 8-3.

But a lot of the love that enveloped this club in June and July has disappeared of late. They are no longer atop most power rankings – for whatever that is worth – and now have both the Riders and Calgary Stampeders closing in with the meat of the Canadian Football League schedule still to come.

Funny thing is, even among the angst that came from the loss in Regina there is still a good buzz in the locker room and still a sense of resolve. 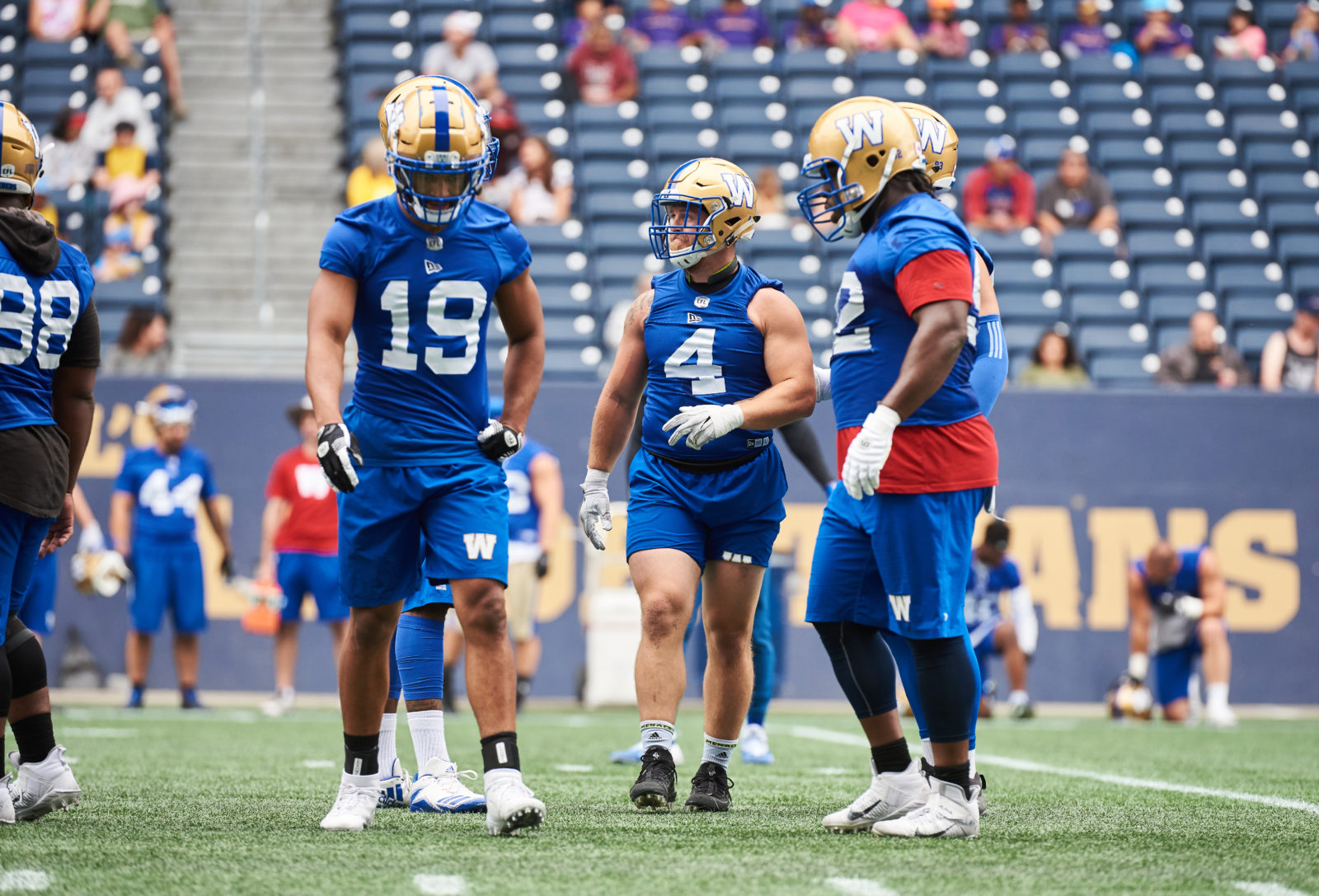 “It’s a band of brothers in here,” said Bombers cornerback Chandler Fenner. “Everybody’s tight. We just don’t let that type of stuff eat our energy. I’ve got a saying that ‘things will eat your energy if you let them.’ We won’t let that negativity get to us or let it eat our energy. We want to stay positive and stay focused.

“We work on continuing to strengthen our bond, making our defence tighter, our secondary tighter, our communication between each other tighter,” added Fenner. “We can’t let the things that really don’t matter to us somehow affect us. We can’t do anything about the stuff outside of our control, so why give that energy?

The Bombers completed their final full practice before Saturday’s Banjo Bowl behind closed doors today. Here are the some of the other items that came out of Thursday’s media availability…

NO NEWS IS… NO NEWS:

Bombers head coach Mike O’Shea never ever tips his hand when it comes to possible roster adjustments. And so it was no surprise when the Bomber boss was asked Thursday about the status of receivers Lucky Whitehead and Nic Demski – both of whom did not practice on Wednesday – that he offered no hints as their availability for the Banjo Bowl.

The Bombers, FYI, will release their depth chart sometime on Friday and that may offer some clues. Asked if Whitehead, who was not available to the media, practised on Thursday, O’Shea said “He was around. As I said before there are lots of guys that are out there running around. Some guys need it and some guys don’t. We’ll see where all those guys are tomorrow.”

For what it’s worth, the Bombers had both Daniel Petermann and Rasheed Bailey working with the starting receiving corps at the last open practice on Wednesday. 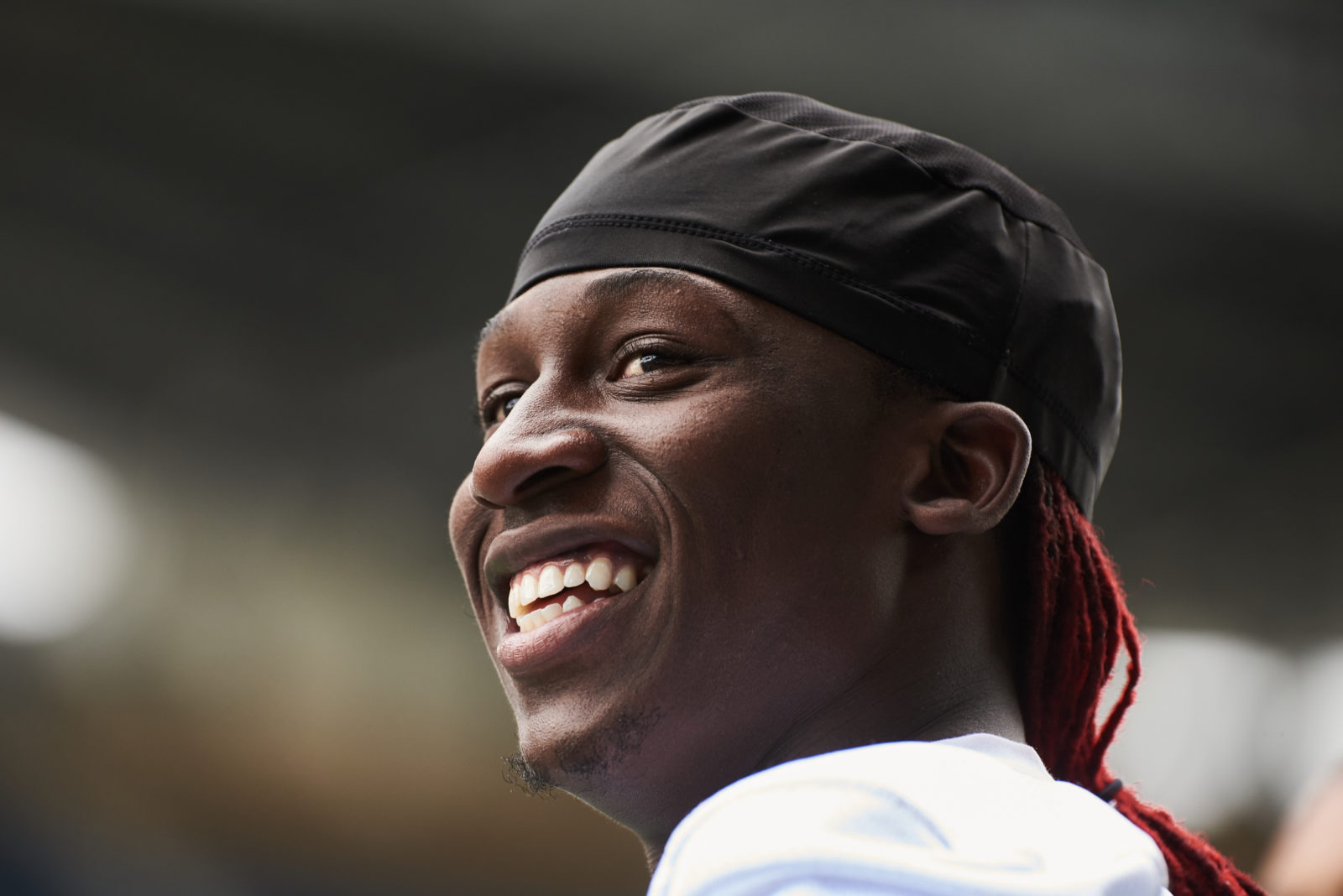 The Bombers continue to be the least-penalized team in the CFL – 84 infractions for 748 yards – but were nailed for 10 last week for 104 yards. Three of those infractions came on special teams, which cost the Bombers field position in a game that was decided on the last play.

“You’re asking if there was a definitive factor that caused that,” said O’Shea “I don’t know what that was. We did take an unusual amount, by three (over the average). And we did take a few more in the return game than we’re used to taking.

“One in the return game was a new penalty that’s just being called in the last couple of weeks, basically a cover guy got tripped from behind inadvertently, but that’s a penalty. It’s a penalty on offence and on defence in terms of the passing game, so it’s now a penalty on special teams.

“We took a couple others that were interesting to look at. They’re penalties and they cost us, that’s for sure.”

HOME IS WHERE THE NOISE IS:

The Bombers (5-0) and Hamilton Tiger-Cats (6-0) remain the CFL’s only unbeaten home teams. And the club is hoping a loud crowd can affect the Riders offence the same way the sold-out building in Regina did last week.

“We’re looking forward to being out there again and having our crowd behind us and our atmosphere,” said Willie Jefferson. “The loudest fans in the CFL, we’re going to try and make it hard for (Fajardo), keep the same pressure, keep the same energy and try and keep him flustered back there in the pocket and have him moving around more than he wants to and make it hard for him to find his targets. Hopefully we can get him on the ground more than we did in the first game.”

“It’s very hard for an offence with that noise,” added Bombers left tackle Stanley Bryant. “In Saskatchewan it gets really, really loud. Communication there is very important, way more important than it is at home because here we can actually hear each other and tell each other what’s going on.

“It’s all being on the same page and being able to see the same thing. Defences can do way more on the silent count.”