“It’s going to be fun.” | Jefferson looking forward to LDC 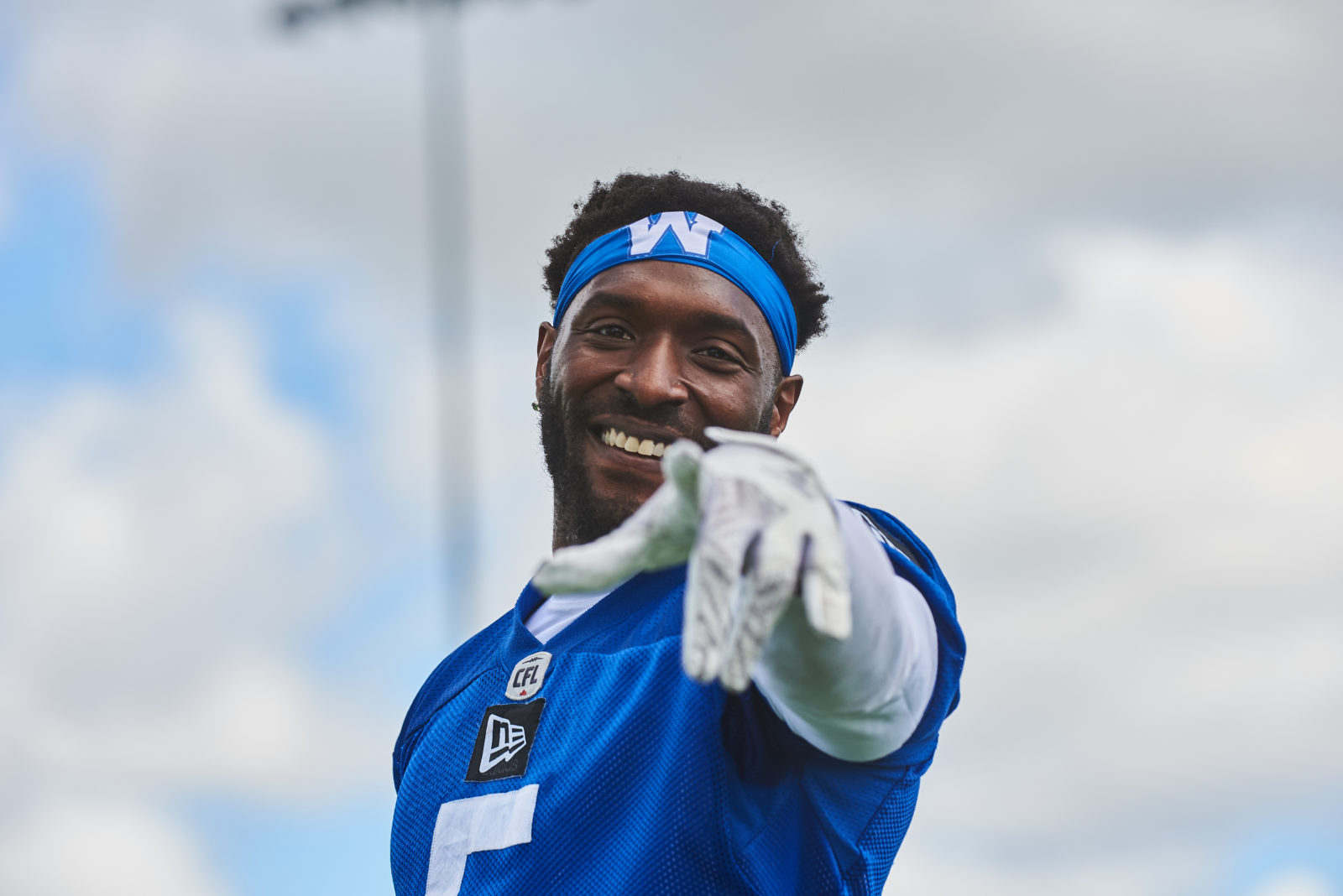 “It’s going to be fun.” | Jefferson looking forward to LDC

Willie Jefferson has been around the Canadian Football League long enough to understand fully and completely how this is going to unfold.

Yes, from the very first moment the veteran defensive end steps onto the Mosaic Stadium turf in Regina on Sunday afternoon in the 55th annual Labour Day Classic – nattily attired in his white Winnipeg Blue Bombers #5 jersey — the boos, catcalls and insults will rain down on him like a month-long monsoon.

Oh, and he’ll be loving absolutely every nanosecond of it all.

“It’s going to be fun. It’s going to be really exciting,” began Jefferson after the Bombers completed another practice on Thursday. “I’m anxious to get out there and see all of my old fans and just be in that stadium and see the atmosphere.

“It’s always a great time of the year, a great facility to be in for the Labour Day game. It’s going to be fun to watch us run around on that field and make plays.”

Jefferson’s first 10 games as a member of the Bombers have been simply superb. He’s been everything as advertised – x10 – as a disruptive, game-changing defensive force. And the fact he is doing all this in blue and gold now will undoubtedly make him a target come Sunday. 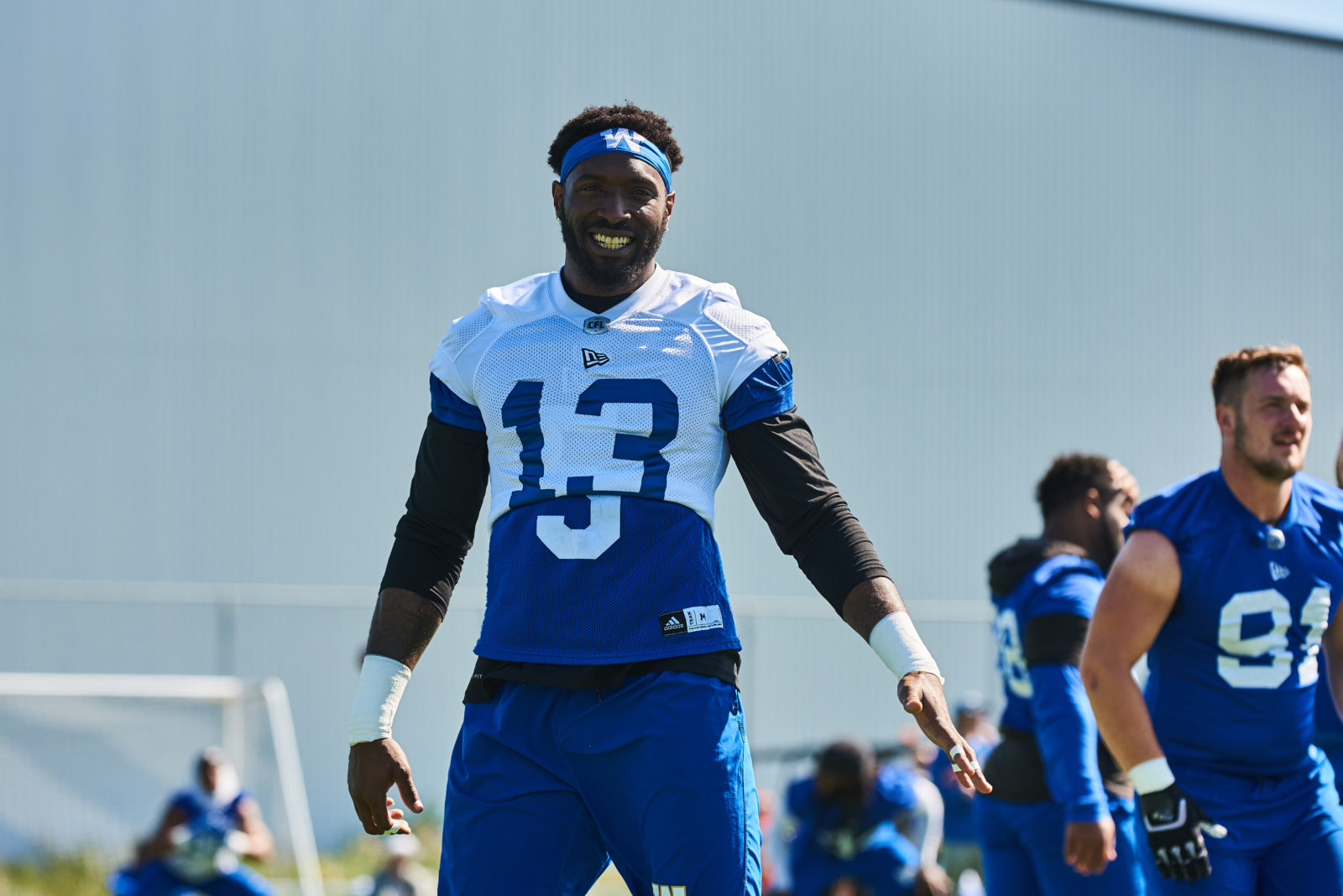 Jefferson reiterated again that his decision to sign with the Bombers during free agency in February was ‘simply business’. He had been a disciple of former Edmonton and Saskatchewan head coach Chris Jones, and when Jones left for the Cleveland Browns, Jefferson opened up his options as to where to sign.

“It’s mostly business,” said Jefferson. “With me being in the CFL for as long as I have been, I’ve always been with Coach Jones and when I left for the NFL and came back the reason I chose Saskatchewan was because of Coach Jones. So, when he left it left me with a decision about how I wanted to pursue the rest of my CFL career. I made the decision to come here and it wasn’t all about the money.”

Jefferson said he has already received calls, videos and texts from former Rider teammates this week and he expects the banter to crank up even further come Sunday. And he won’t be one to shy away from any of it.

“I talk throughout the game,” he said with a grin. “Sometimes it’s aggressive chatter when it’s towards the other team, sometimes it’s just jokes if it’s in between plays when the referees are getting situated or during TV time outs.

“Sometimes it’s friendly and sometimes it’s a lot of chatter. I’ve been playing this game for a while so you have to know how to approach the game. If I’m having fun out there, I’m going to talk and have fun. But if I’m in a serious mode and I want to talk serious, I’ll talk serious. I can go back and forth.”

There’s much more at stake here than just staying atop the West Division and bragging rights between two prairie rivals. Both Jefferson and Riders defensive end Charleston Hughes, you see, are certainly in the discussion for the CFL’s Most Outstanding Defensive Player award.

Hughes tweeted earlier this month that if he wasn’t the league’s top defender that the voting was rigged – he did include a laughing emoji with the tweet – and then earlier this week, days after Jefferson’s incredible work in the win over Edmonton, commented on how his lead for the quarterback sack title had shrunk.

If I’m not DPOY this year @CFL rigged 😂

And Jefferson makes no secret he’s not just following along with this top defensive player discussion, he’s actively working to chase the thing.

“Right now, if it came down to the Most Outstanding Defensive Player it would be either him or me. He has 10 sacks, I have eight. He doesn’t have any picks, I have two picks. We’ve both got a lot of forced fumbles and he has more tackles than me, but at the end of the day it’s about who puts the most plays out there, who puts the most effort out there and what decision the CFL makes. 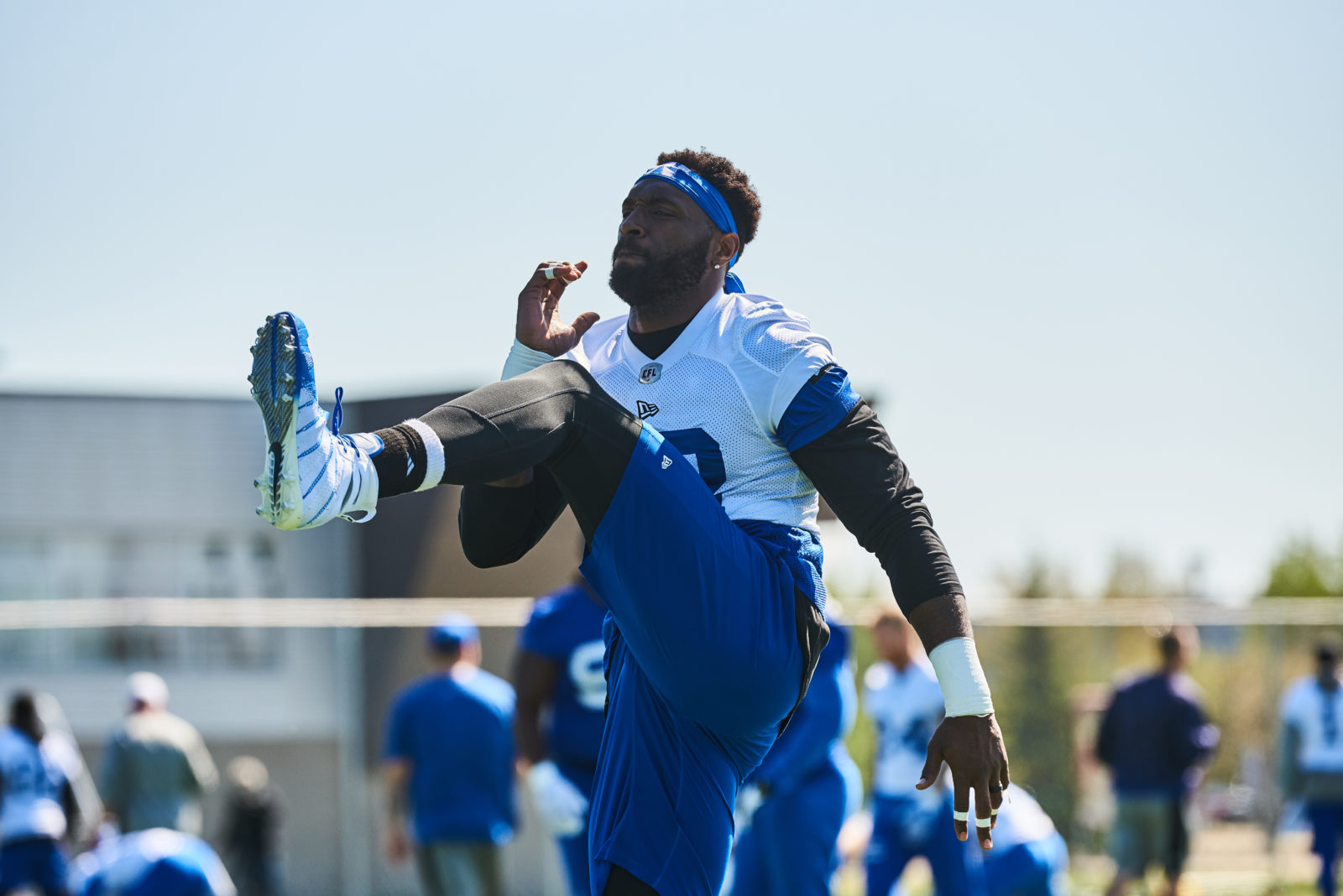 There was a bit of a murmur during Thursday’s practice when WR Lucky Whitehead appeared to pull up lame. He did not finish the session and was replaced by Kenny Walker – but did not leave the field and was available for interviews afterward. Head coach Mike O’Shea did confirm that everything was OK with Whitehead.

The Bombers also had RT Jermarcus Hardrick back at his spot with the starting offence at practice and O’Shea offered this when asked about the status of left guard Cody Speller, who has missed the last two games:

“He’s coming along. He’s certainly not as grumpy as he was, if that’s any indicator. Most guys are (grumpy) when they’re on the sideline for an injury. He’s a man of few words anyway, but I think I saw him smile today.”

Bombers QB Chris Streveler was reminded Thursday of a comment he made in training camp about wanting to improve the passing aspect of his skillset.

“I hate that I made that quote earlier in camp because I think it just got blown up into something I didn’t mean for it to be,” he said. “It’s just continuing to improve as a quarterback in general – seeing defences, seeing coverages and getting through my reads quickly.

“To me it’s not about any stats or passing the ball or running the ball. It’s just about moving the ball, creating first downs and trying to score points.” 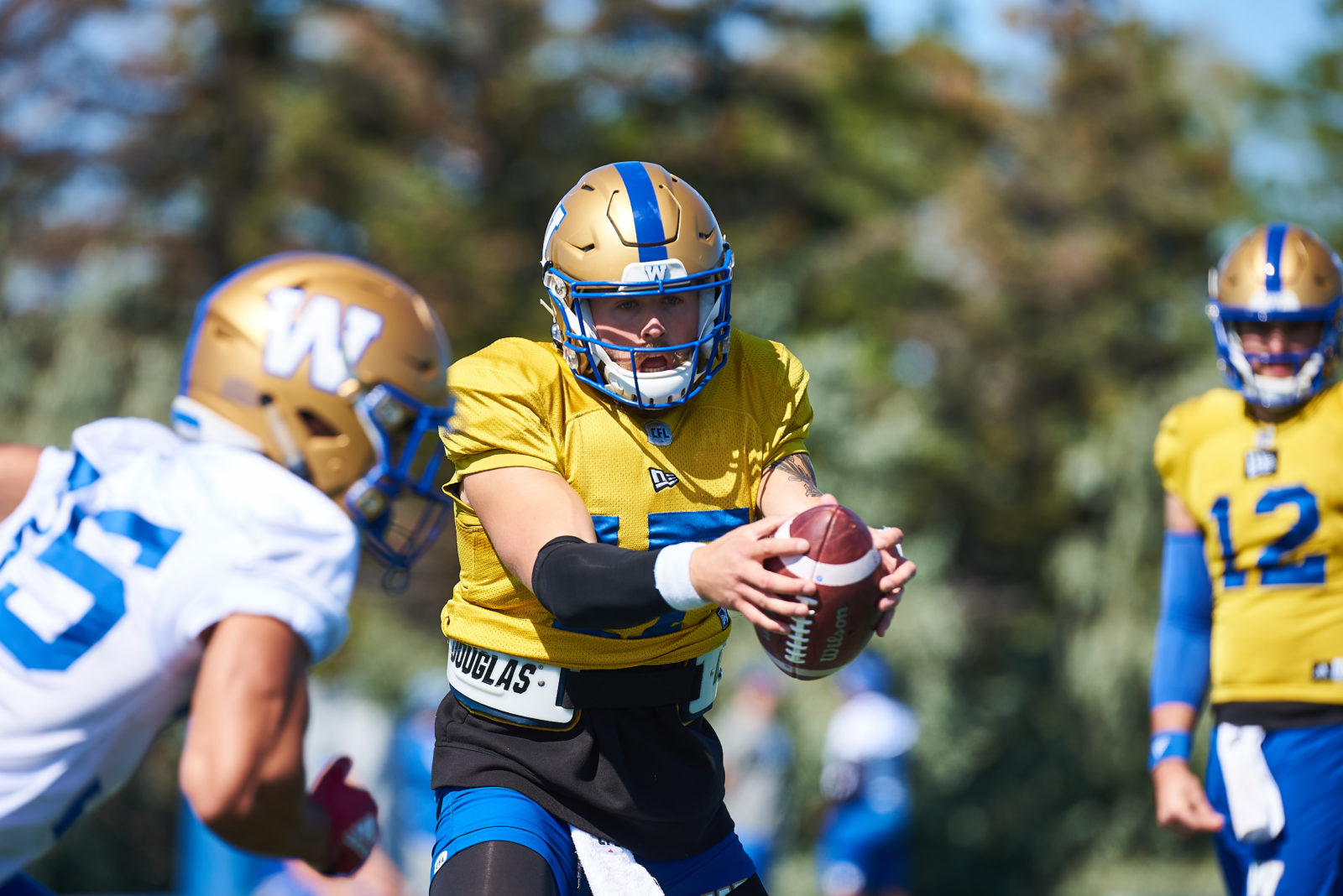 The Bombers have spent the last two days, as they do before every Labour Day Classic, practising with simulated crowd noise being blared on speakers as the offence breaks the huddle to mimic what they expect to hear on Sunday in Regina.

“You know it’s going to be loud and their fans are very supportive,” said O’Shea. “Like our fans, they have a good understanding of when to cheer and why to cheer. We’ve put in the crowd noise behind the offence and it’s just something to heighten the awareness of how important communication is in all three phases because there are times it will be loud when maybe you don’t expect it. But certainly when our offence is out on the field you know they’re going to be trying to disrupt it.

“We’ve been at it long enough with this process that we’re fairly comfortable with it.”

Bombers offensive coordinator Paul LaPolice made his weekly visit with the media on Thursday and offered up his take on variety of topics.

On Wednesday’s release of receiver Chris Matthews he credited the work of Kenny Lawler and Lucky Whitehead and also spoke of the return of Darvin Adams from injury:

“Those young players have performed well and that’s what happens in this game of football. Hats off to the young guys who did a nice job, but with Darvin coming back on that’s kinda what happened.”

“He’ll get better as we go. It was his (fifth) start. He did great things against a good defence, a team that doesn’t allow you to run the ball and we were able to run the football. We took three sacks – one of them was when he fumbled the ball to start the game – but we didn’t give up a lot of sacks against a very good defence and we didn’t turn the ball over.

“We’ll work on throwing the ball better and all those other things, but he went into a difficult place and got a win and when you watch some of the teams we’ve been facing with their starting guys… Edmonton’s done a great job defensively all year.”

And on the suggestion the Bombers need to up their passing yardage totals:

“Each week is different. Our yardage is not going to be as much when I run the ball that much. I don’t know, we might have to throw it 42 times… it all depends on the flow of the games so I hate trying to say, “I have to do this more’ or ‘I have to do that more.’ The game usually dictates whether you’re throwing it deep, short… all those things.

“But, certainly, we didn’t execute well enough. We could have had way more yards… we had three drops, we got other things we missed in some of the routes. We’ll get better.”

For those fans asking about a couple of fumble situations involving the Bombers in last week’s win in Edmonton, here’s a video clip courtesy CFL Senior Director of Officiating Darren Hackwood that offers the explanation:

During game 49 in Edmonton, there were two unique loose ball plays. Senior Director of Officiating Darren Hackwood explains below! pic.twitter.com/DfO9vCs1n0