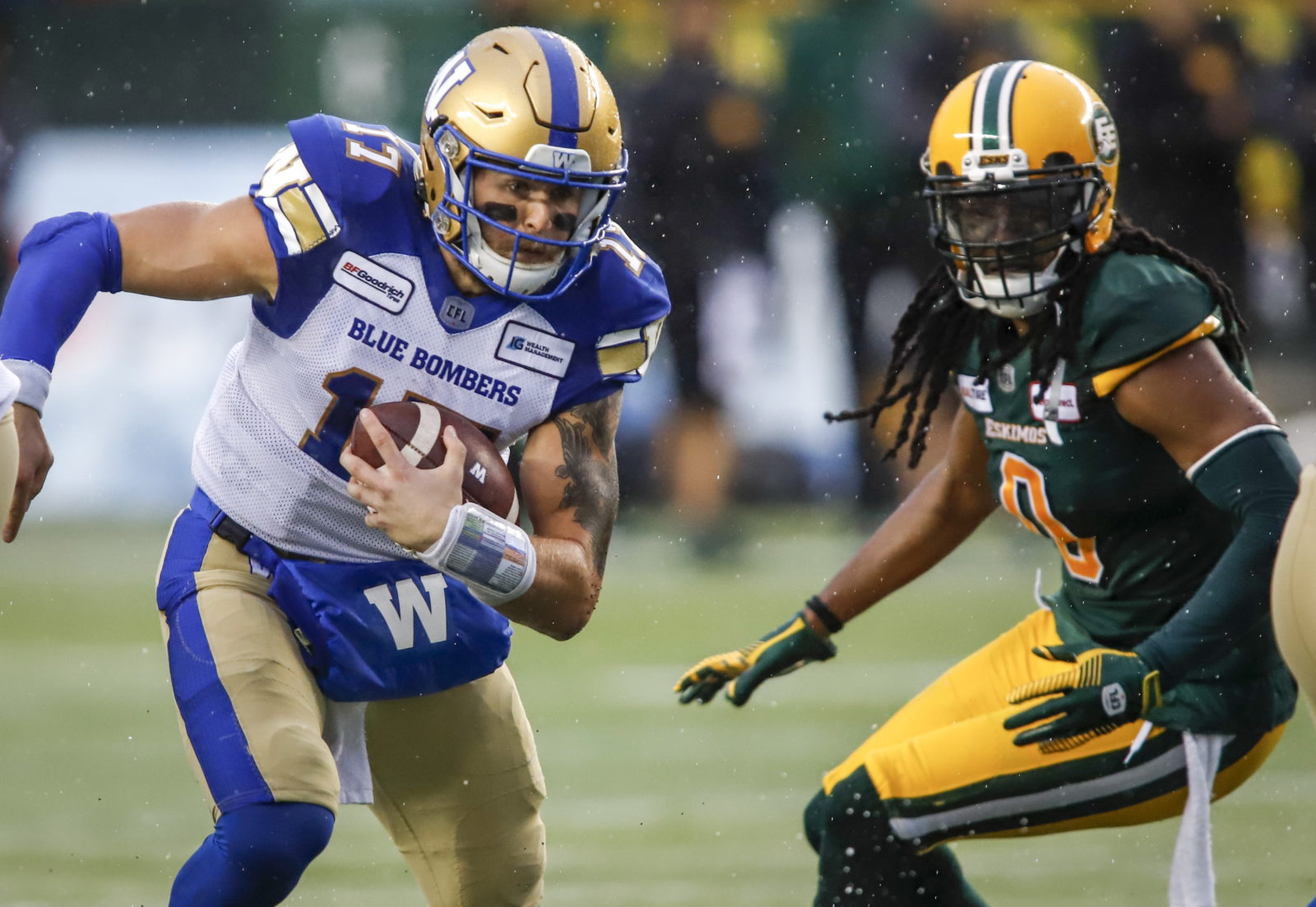 He is a master of disaster, a raging bull who can bring the thunder and the lightning on every snap.

It’s not like the Winnipeg Blue Bombers didn’t know what they were getting when they went free-agent shopping this winter and bagged veteran defensive end Willie Jefferson. After all, he was already a two-time Canadian Football League All-Star and was not only the Saskatchewan Roughriders’ Most Outstanding Defensive Player last year, but also named the club’s Most Outstanding Player.

And while the mental scars may still be healing, it’s also worth remembering – even for just a moment – that the Bombers also had a too-up-close-and-personal view of his skillset in last year’s Banjo Bowl, when he returned an interception 97 yards for a touchdown.

But the perspective is different when a player is wearing the same colours, as Jefferson is now in blue and gold after five years in the CFL with both the Riders and Edmonton Eskimos. And when Jefferson authors the kind of virtuoso defensive performance he did in Friday’s 34-28 win in Edmonton, well, the appreciation of his skills grows dramatically. 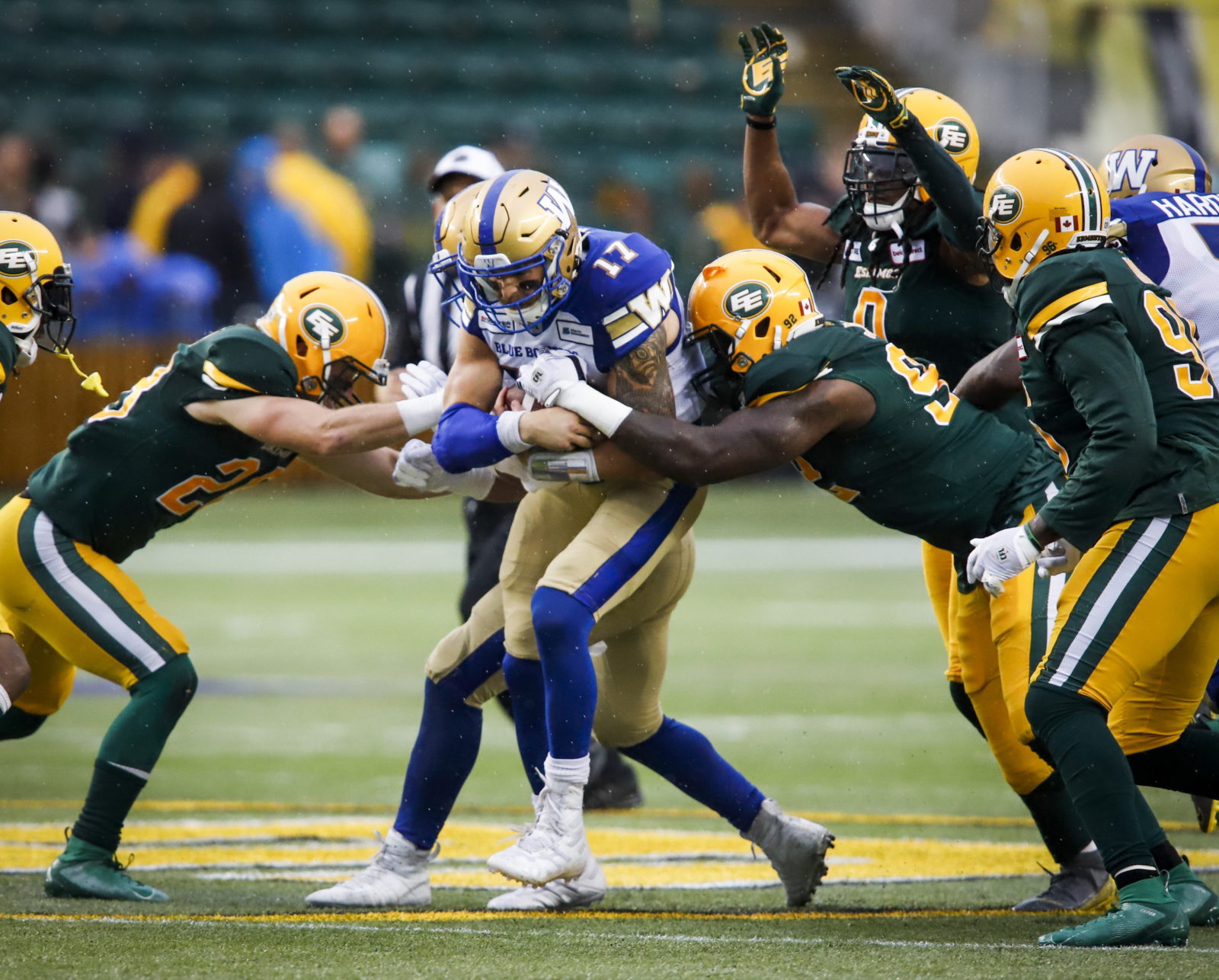 We also heard the words ‘incredible’, ‘dominant’ and ‘beast’ in our visits with players in a celebratory Bombers locker room afterward.

“He was spectacular,” said Bombers right tackle Jermarcus Hardrick. “You know, I have to go against Willie every day in practice and was lining up against him in the four-five years before that. I know how tough he is.

“But just think of next week’s game (the annual Labour Day Classic in Regina). We go in there and have to use a silent-count (because of the noise) on offence. And if I’m against Willie again in that situation? Man, I thank the football gods he’s here now.”

What Jefferson did Friday didn’t just help the Bombers stay atop the West Division and move to 8-2 for the first time since 2001, it helped the club overcome the absence of a number of starters, including Matt Nichols, Darvin Adams, Cody Speller, Jackson Jeffcoat, Craig Roh and Brandon Alexander.

There was the ground-and-pound rushing game spearheaded by Chris Streveler and Andrew Harris, some superb work from the special teams, particularly kicker Justin Medlock, and an overall solid defensive performance that also included a pick-6 by Marcus Rios.

Still, it was Jefferson who made one highlight play after another. Fittingly, that included his work on the Eskimos’ onside kick late in the game which he batted out of bounds to give the Bombers possession with 1:08 remaining. 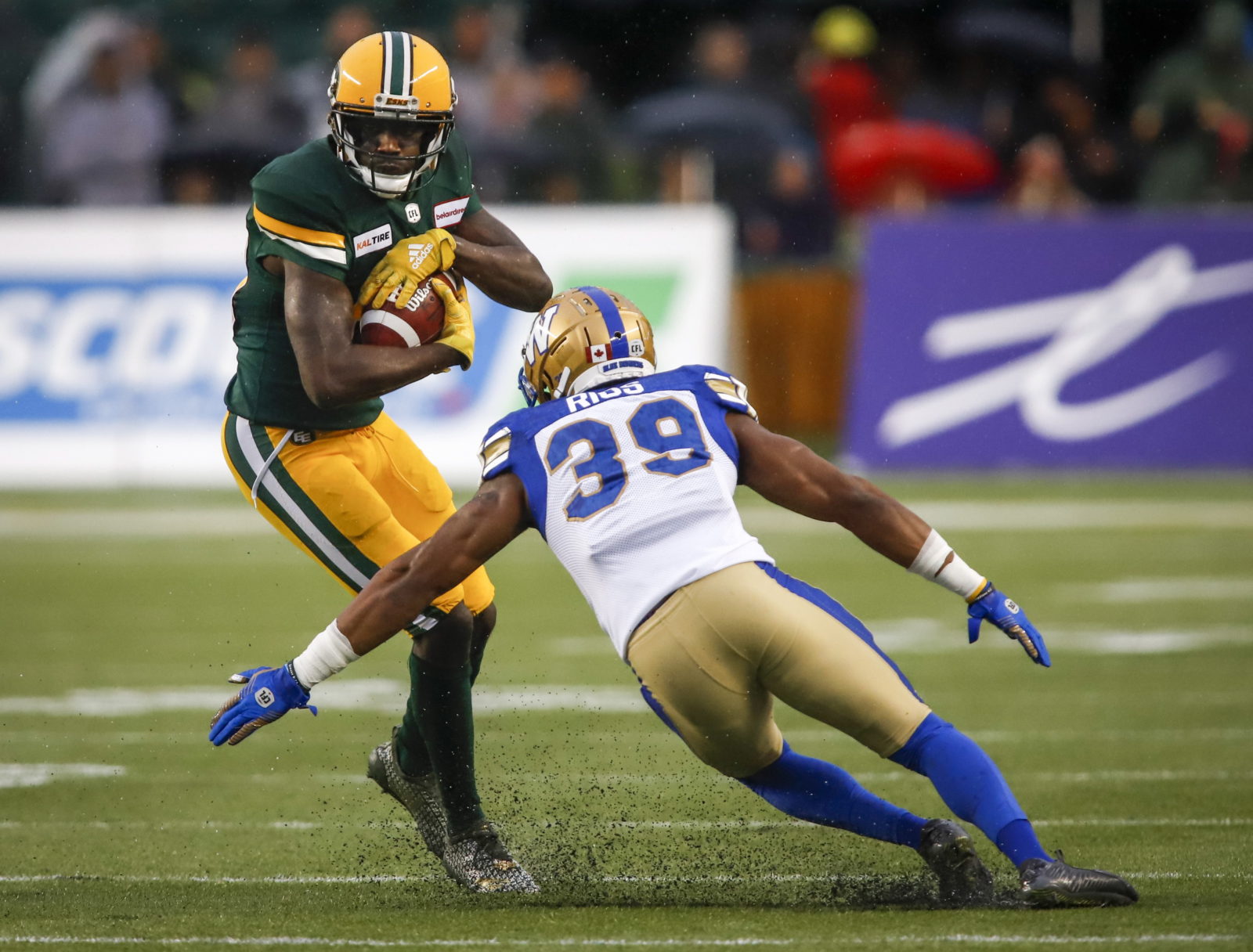 “All I can say is I’m happy Willie is on our team this year,” said Bombers quarterback Chris Steveler with a grin. “He’s a big-time player who makes a lot of big plays in big-time moments. The whole defence made great plays tonight.”

“This was just another 1-0 week for us,” added Jefferson, not long after hugging a security guard outside the Bombers locker room. “We just want to keep going 1-0 every week. This was a big game just because it was a Western opponent. We’re trying to get ready for going to Sask next week, trying to get ready for these back-to-back games and keep this momentum going.

“Offence, defence and special teams, we’re all clicking. And when we’re clicking like this it’s a good feeling.” 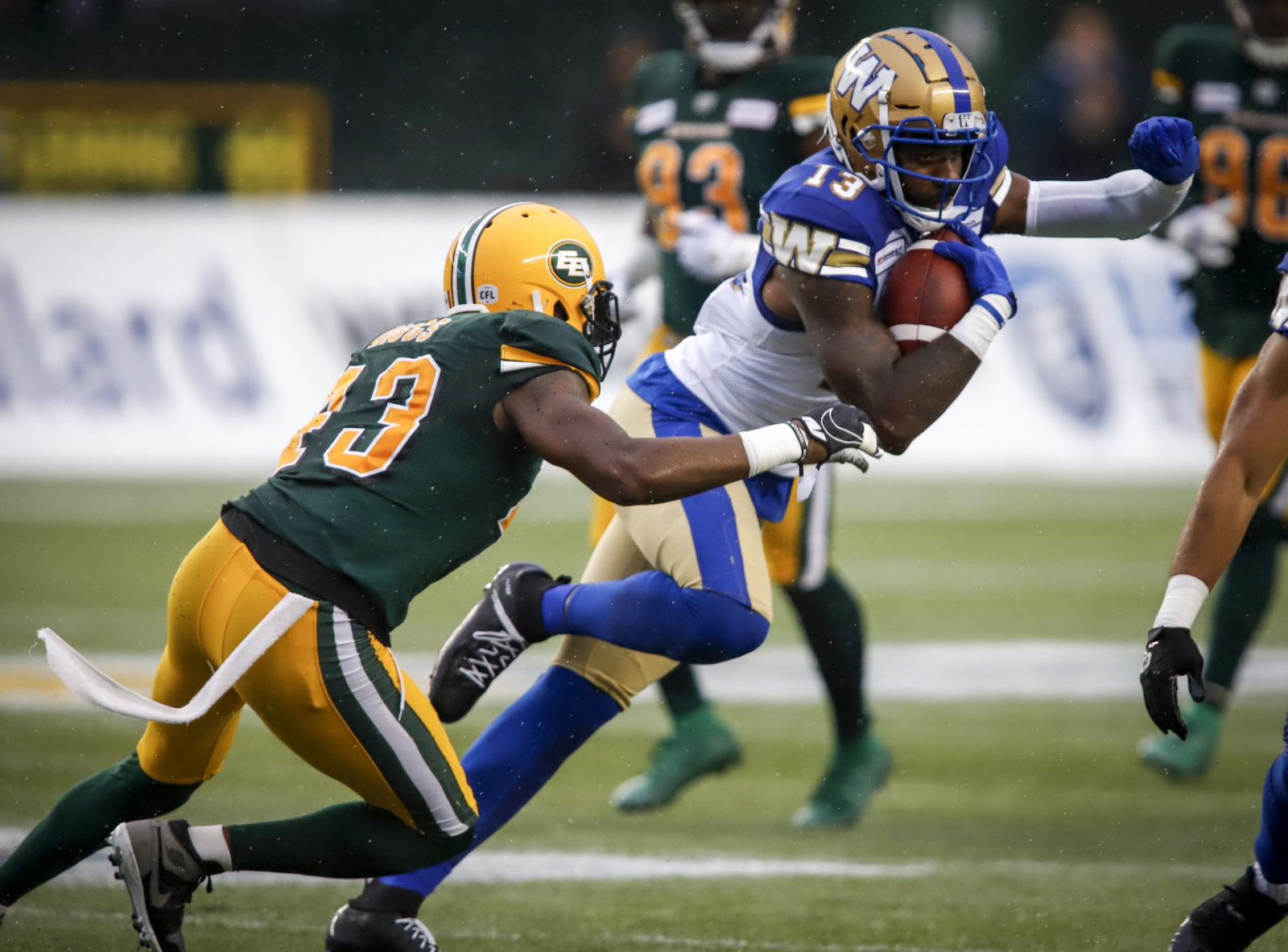 THERE IS A WHOLE LOT TO STILL DIGEST… about the Bombers work in Edmonton in addition to the Jefferson performance, including what Streveler was able to do at the controls of the offence in the first game without Nichols this year.

Making just his fifth career start in rainy conditions, Streveler was just 7-of-17 passing for 89 yards. But he didn’t turn the ball over, and of his seven completions, five were able to convert second downs – critical in the Bombers goal of staying on the field longer offensively to keep the ball out of the hands of Trevor Harris.

Streveler also rushed 14 times for 95 yards and a TD as the Bombers cranked out 189 yards along the ground against a stout Eskimo front which had been averaging just 88.3 yards rushing against through their first nine games.

“There were a couple of situations where they knew we were going to run the ball and we were still able to sustain the drive and keep it going,” said Bombers centre Michael Couture.

“When you have two threats like that… I mean, Andrew is a big enough problem for defences himself and then when you have a quarterback with his speed and power, it’s always great to have.”

Just for those who are asking, you don’t have to go too far back in the Bombers annals to find a game in which they passed for under 100 yards and still won. Back on November 3, 2018 Winnipeg passed for just 91 yards in a 23-5 win over Calgary. Of course, there were some extenuating circumstances – Calgary was resting a number of regulars for the playoffs, including quarterback Bo Levi Mitchell, while the Bombers started Dan LeFevour for an injured Nichols and he went 13 of 17 for 91 yards in a decision that was also dominated by the defence, who scored twice on a fumble recovery and a Pick-6.

“It felt like playoff football out there,” said Hardrick. “We won and obviously there are things people are going to point out stats-wise, but a win is a win, man. If we can keep winning like this it doesn’t matter what the stats say. If we win and you love us, you should be happy.” 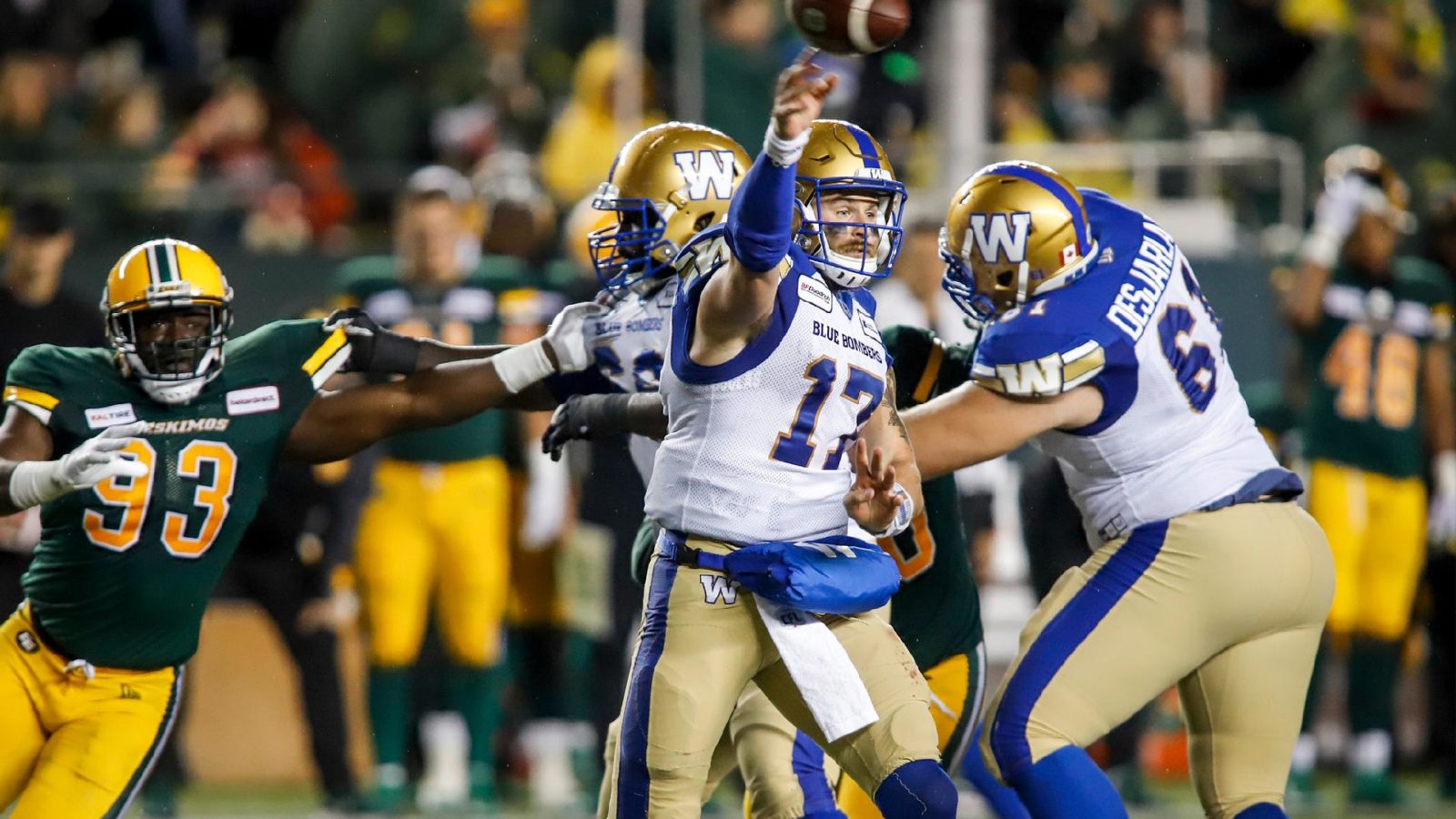 ONE MORE FROM HARDRICK… who was asked to take us into the huddle for evidence of Streveler’s ‘It Factor’ which O’Shea and Harris spoke about on the eve of the game.

“He was definitely in charge, especially at the end,” said Hardrick. “We had a lot going on and we probably basically won the game off those two late penalties (Edmonton was nailed for roughing and objectionable conduct penalties with 3:06 remaining that helped set up Streveler’s rushing TD). And Strev, that whole time, is telling us, ‘Keep your composure, do it for your team and make them take the penalties.’ Every play he was telling that to us and you could see at the end of the game with those penalties how important that was.

THE STREVELER STORYLINE, NATURALLY… dominated the days leading up to Friday’s game. So many were quick to shovel dirt on the Bombers after the injury to Nichols, but while the passing numbers were hardly jaw-dropping, there’s no question his teammates are convinced he can help carry this team into September and October.

“We’ve all got faith. This whole locker room has got faith in Chris,” said receiver Lucky Whitehead. “We know what he can do. We know he can extend plays. He’s an athlete. But he’s also our leader right now and we’re going to listen to him and trust him. I told him before the game, ‘We need you. So if you have the chance, slide.’ At one point he told me, no, and then later it was ‘I got you.’”

“Man, Streveler was amazing,” said Jefferson. “His passing was amazing, his running was amazing, the pocket poise he had… Everything. Hats off to Strev. First game as a starter this year and he had a zone. Brave, is a good word for Strev. He’s a warrior man.” 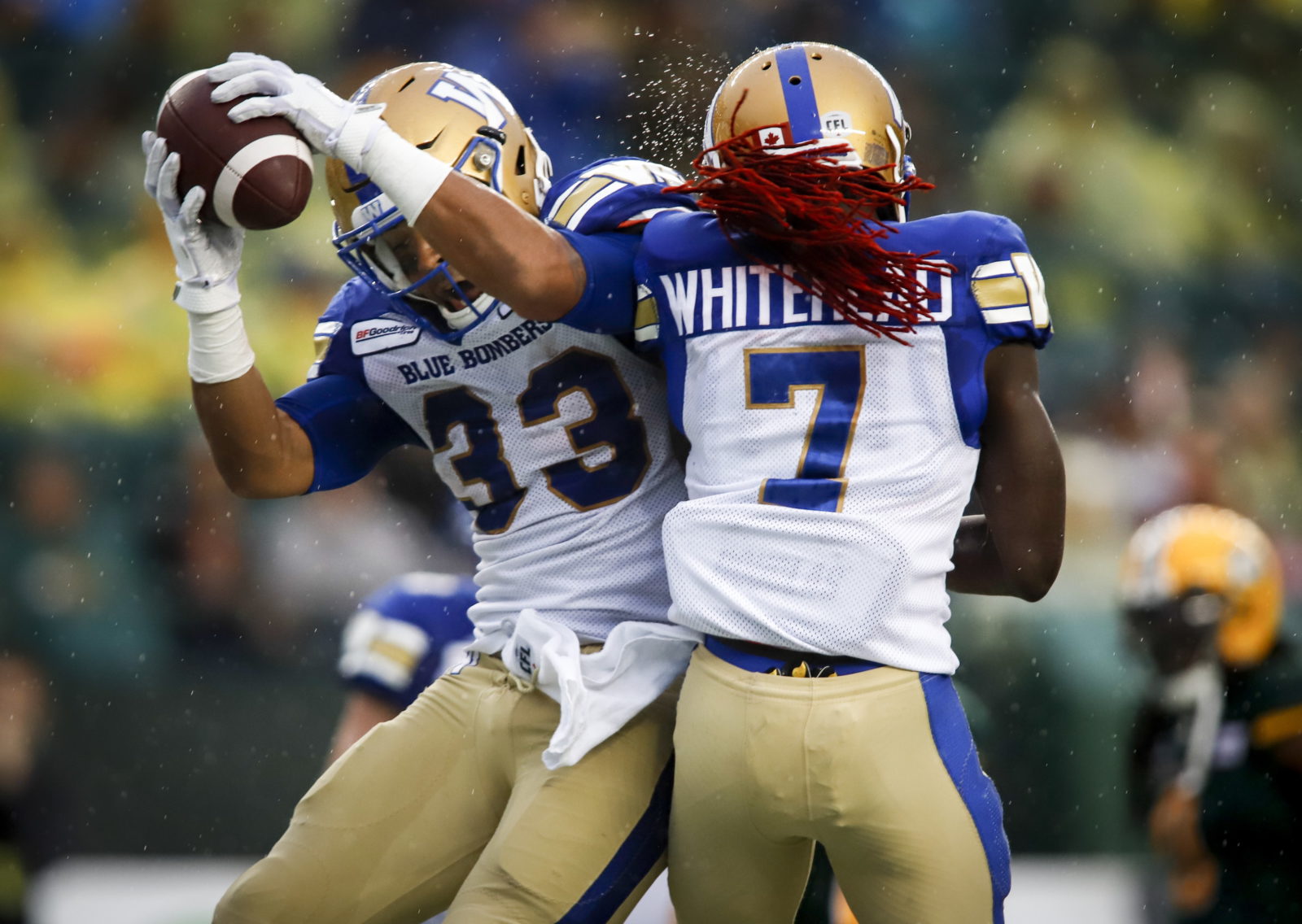 WORTH NOTING… are the two long-bomb kicks Medlock nailed in the win, a 51-yarder at the end of the first half and a 50-yarder with 50 seconds remaining. ‘Money’ Medlock – as his teammates call him – is now six of seven on field-goals from 50 yards or longer this year.

AND, FINALLY… the Bombers have been insisting all year that their roster depth would serve them well at various points during the season. Rookie defensive back Marcos Rios is just one of the latest examples of that depth.

Rios had a Pick-6 in his first start at the field halfback spot  – a position that has been held by Brandon Alexander, Chris Humes, Mike Jones and Mercy Maston this year – after being activated from the six-game injured list.

“It felt good. It all started Day 1 this week of practice and I didn’t miss a beat,” said Rios. “My coaches are on me, my teammates are on me and that’s what they expect: when your name is called you’ve got to step in there and you’ve got to be a playmaker.”

Consider this: the Bombers dressed five members of their 2019 draft class Friday, with Drew Desjarlais and Jonathan Kongbo both starting, Tui Eli the sixth O-lineman and Kerfalla Exumé and Nick Hallett continuing to do their thing on special teams.

Global player Thiadric Hansen had two tackles in a rotation at defensive end, and Alex McCalister, who just returned to the club after being released, hit the arm of Trevor Harris as he was throwing that led to the Rios interception return.

“One thing coach always preaches is react to the ball that’s thrown and get there, even if it’s not intended for you you’ve got to get to the ball, “ said Rios. “When you run to the ball, good things happen and that’s exactly what happened.

“We’re real competitive,” added Rios of his defensive teammates. “We’re real close and we all continue to push each other and they continue to help me understand the game more because it is my first year. I’ve still got a lot of work to do, but it’s coming.”