“It’s been business as usual” | Streveler ready to step in 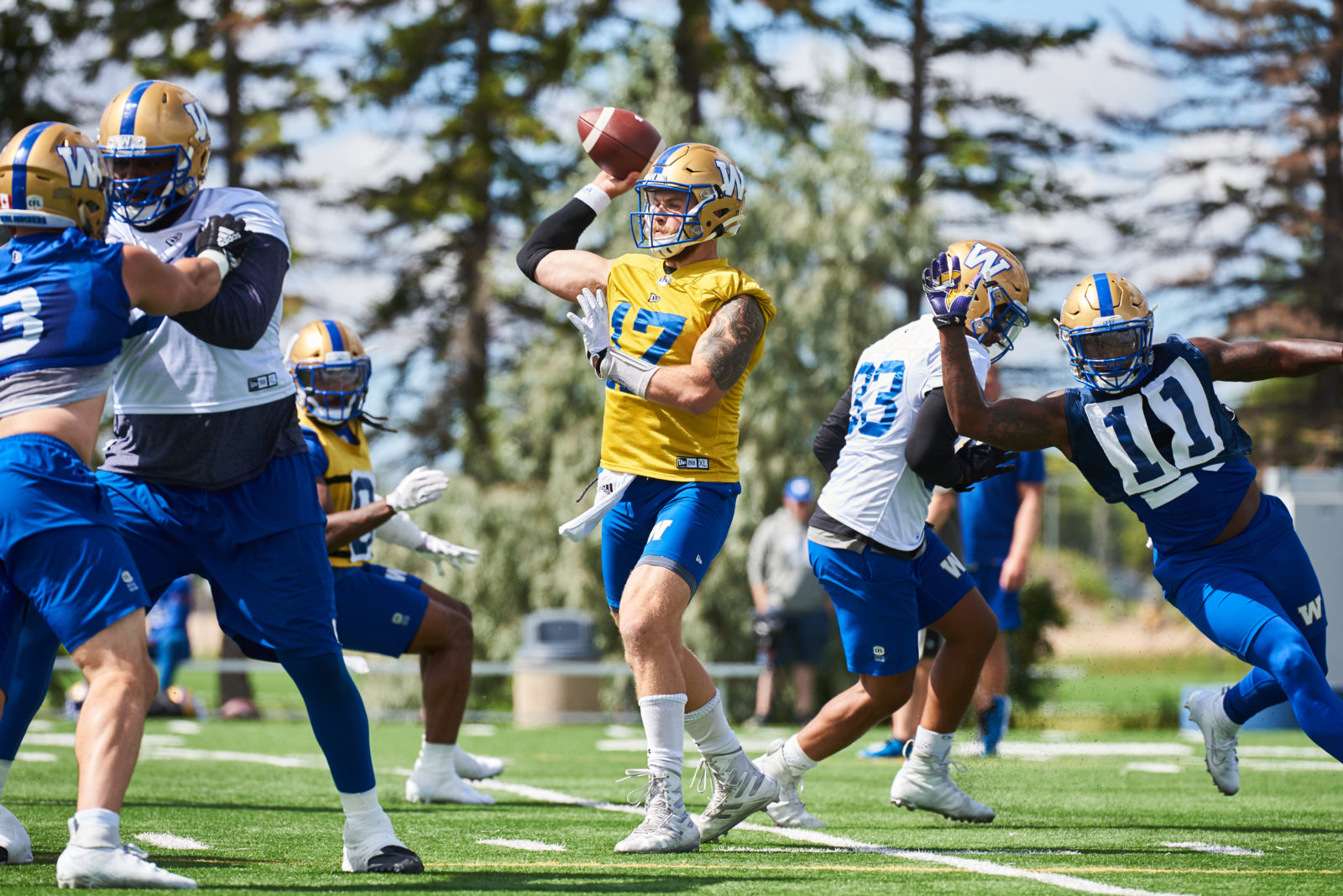 “It’s been business as usual” | Streveler ready to step in

It’s Day 2 of Winnipeg Blue Bombers practice – and this week that means it’s Tuesday – and there is quarterback Chris Streveler a good half hour after the session has ended, playing pitch and catch with anyone willing to run a pass route.

It’s Janarion Grant on one attempt, followed by a long shot down the sidelines to Malcolm Williams. Sean McGuire was doing the same, with Daniel Petermann and others latching on to passes.

All of this is not an uncommon scene at the end of any practice, as players who don’t particularly get a lot of work during the main proceedings try to work on their craft afterward.

But there’s also much more to it all now for Streveler, of course, as he wrapped up the second day of prep for Friday’s game in Edmonton against the Eskimos as the Bombers starting QB for the next six weeks, perhaps longer, with Matt Nichols on the shelf.

That’s the perspective from all those on the outside, at least; that this is his big moment, his time to shine. And on Friday, he could join a collection of new QB faces who have already stepped up through the first half of the Canadian Football League season, from Nick Arbuckle in Calgary, to Cody Fajardo in Saskatchewan, Dane Evans in Hamilton and Vernon Adams, Jr. in Montreal. 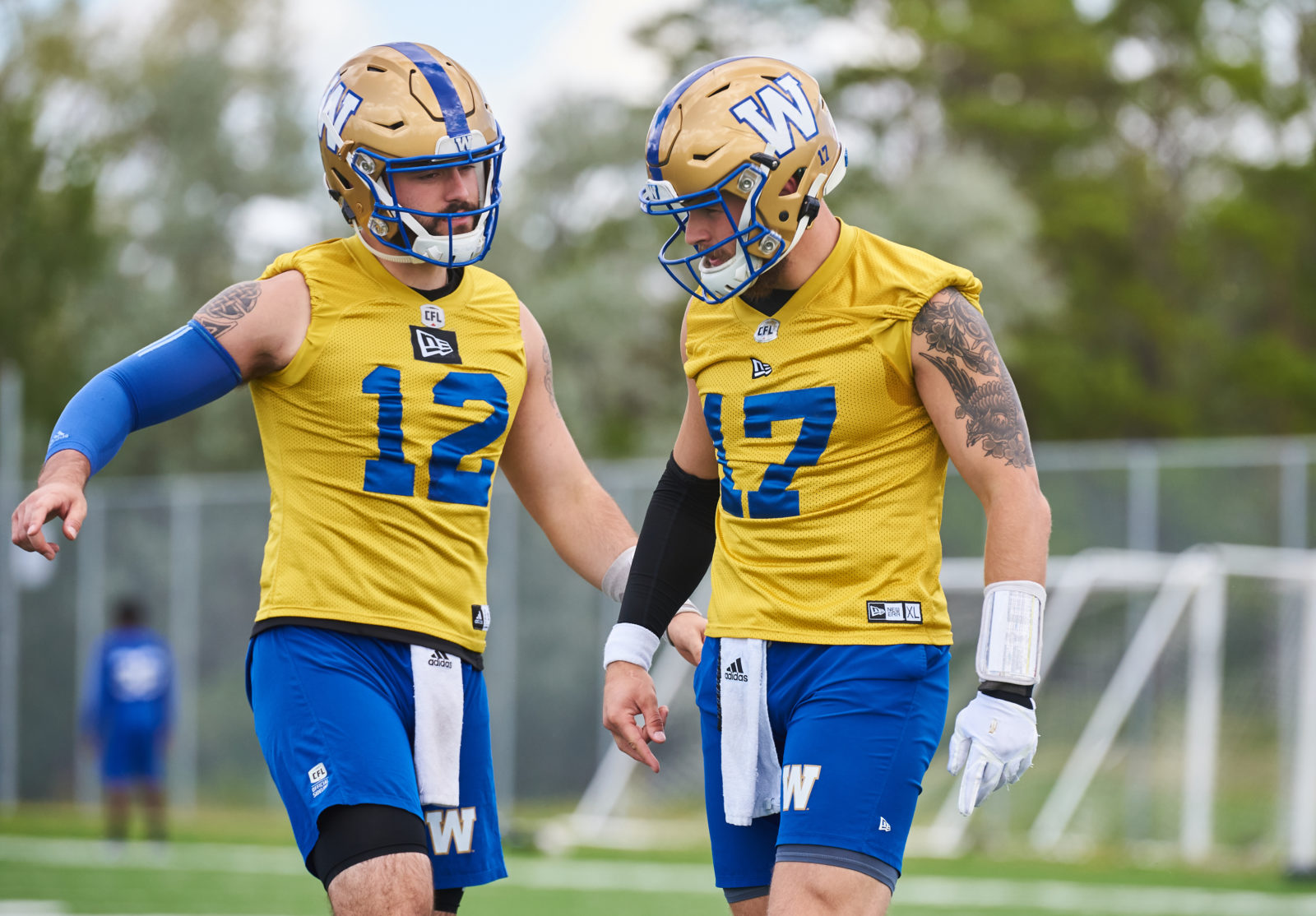 Streveler doesn’t think in those terms, it should be noted. He’s big on the idea of ‘process’ – a combination of his mental preparation like film study, the extra work that includes throwing to receivers after practice. That’s his foundation and as long as he punches the clock every day, the results should follow.

“Honestly, it’s been business as usual for me,” began Streveler in a chat with bluebombers.com after practice. “Part of that is because as a team we emphasize the ‘next-man-up’ mentality. I mean, it’s obviously unfortunate with Matt going down, but having the experience of having to start so early last year, it really made me emphasize my own process on a day-to-day basis and I’ve been able to keep that process when I played and as a back-up. So I’ve just stuck with that. Having that process for any player is important. It’s what gives you confidence and helps you progress as a player.

“That’s been the biggest thing for me this week and getting reps with those first-team guys and building up some timing with them.”

If that seems like a very technical, almost robotic answer from Streveler, it’s important to revisit his background a bit here. He has a kinesiology degree and a Master’s in sports management, as well as being just a few credits shy of a second Master’s in inter-disciplinary studies.

So, yeah, the importance of study and process is not lost on the 24-year-old pivot. But just as important were all the experiences he gained last year in making four starts and taking snaps in every game. That, and all those around him who he could lean on for support. 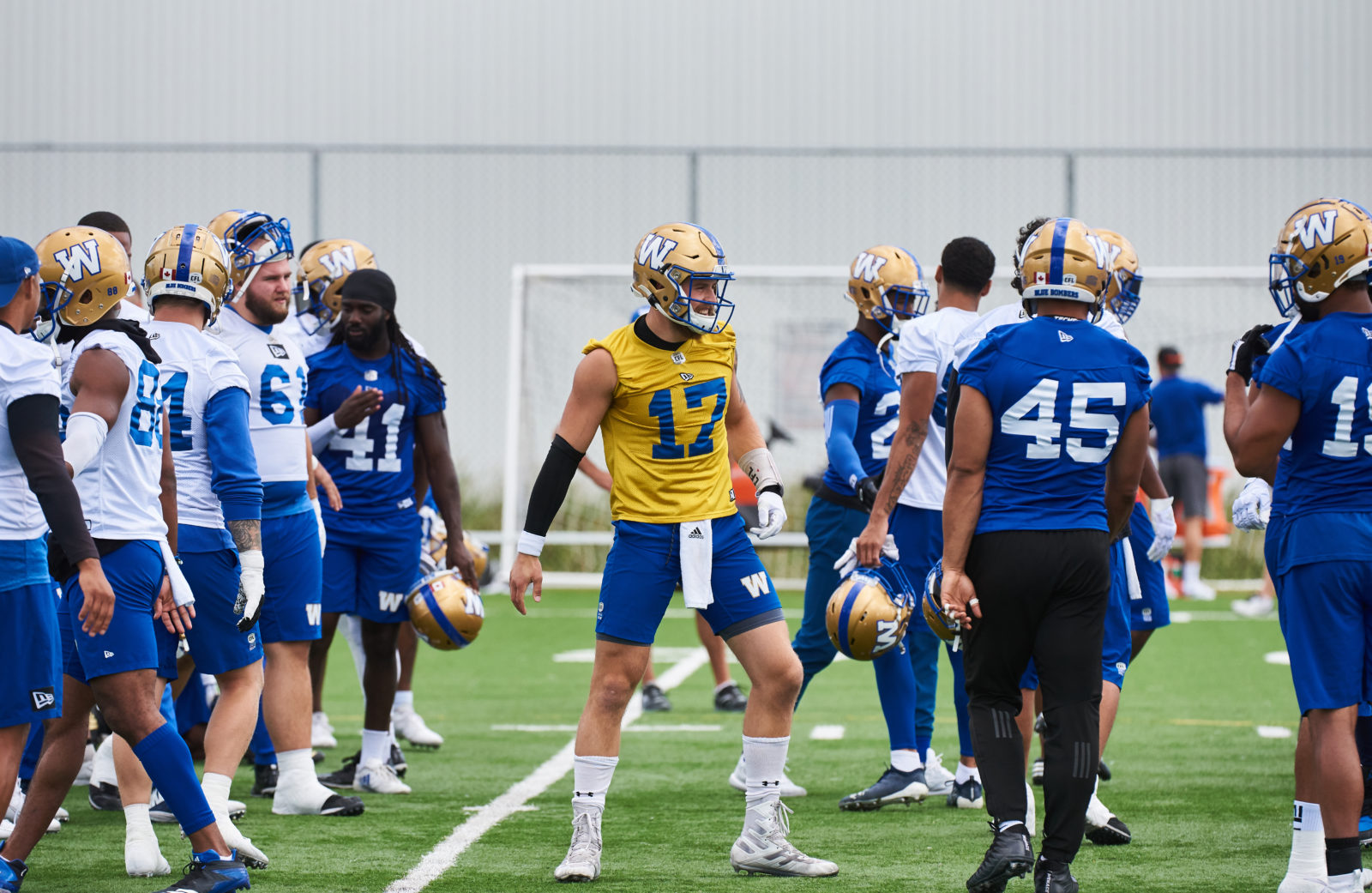 “My process has always been important to me,” he said. “I have my Master’s degrees, but they were all online. That was by design. All day I would go the facility and work out and then watch film with my coaches. That’s always been something that has been important to me. And then it’s been taken to a whole new level up here while working with Matt and seeing how he prepares.

“It’s well documented how much I credit Matt for helping me learn to be a pro and be prepared. It’s not only Matt, but last year we also had guys like (Weston) Dressler, Darvin (Adams), the offensive line – so many players – and seeing the level they bring on a daily basis forces everyone else around them to elevate. It’s like, I don’t want to go into these blitz meetings and not know what’s going on if they call on me. It’s not wanting to let my teammates down and being ready for them.

“Your process and your preparation is something you can totally control. If you prepare as hard as you can and something doesn’t make sense in the meeting, you ask a question. You can control the amount of film you watch, the amount of questions you ask in meetings and getting work with guys afterwards.”

That’s what makes this opportunity so much different for Streveler than the one he got last June. He was a raw rookie back then, still trying to wrap his head around the nuances of the CFL game, let alone develop any kind of chemistry with his teammates. And so if last year he was abruptly pushed into the spotlight for his first-ever CFL start, this year he’ll confidently stride onto the centre of the stage and the bright lights.

“I think the difference is last year I didn’t really know anything about the CFL,” Streveler said. “That first week, I had never even seen Matt go through his weekly process to get ready for a game because it was Week 1. So it was just going off what I felt was best and what I had gathered from the guys around me. I was just going with the flow.

“But this year I have a whole year and a half of not only the things I’ve gained from Matt, but the things I felt have been helpful for me that I can stick with. There’s that, but also just having another year with this team – same coaches, a lot of the same guys and just having that level of comfort with them.

“I’ve been working with LaPo (Bombers offensive coordinator Paul LaPolice) for a year and a half and I think I have a good feel for the way he thinks about play-calling and moving the ball. ‘Comfort’ is a good word for all this.” 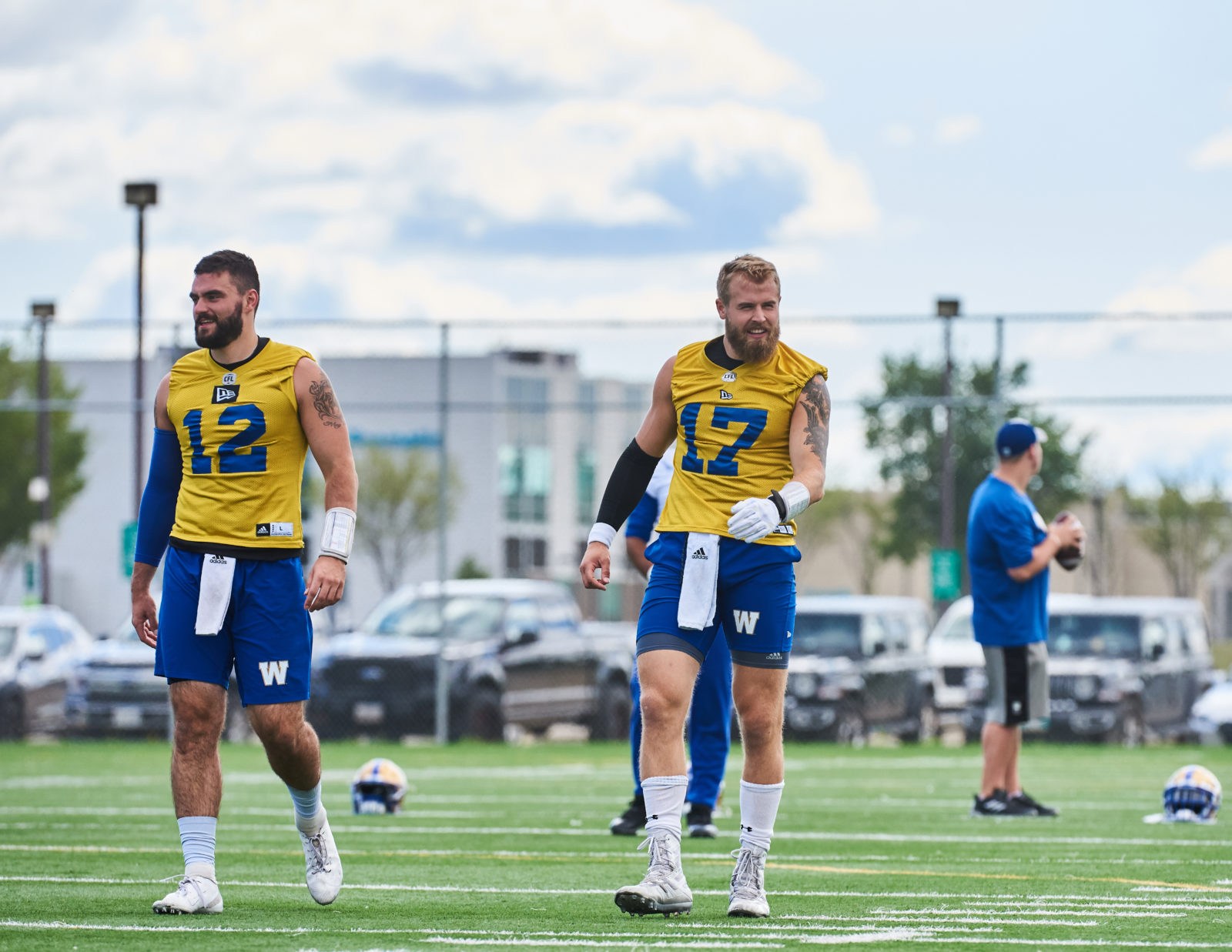 The injuries to DE Jackson Jeffcoat and Craig Roh, who did not finish last week’s win over B.C., has led to the Bombers looking for more help along their defensive line. On Tuesday the club announced they had re-signed import end Alex McCalister, who was one of the team’s final cuts out of training camp.

McCalister (6-6, 240, Florida) played three seasons for the Gators, tallying 52 total tackles, 18.5 tackles for a loss, 12.5 sacks and two forced fumbles in 27 games. McCalister was selected in the seventh round of the 2016 NFL Draft by the Philadelphia Eagles and spent time on the practice squads with the Eagles and Washington Redskins during the 2017 season.

“We thought he was really close to making (the team),” said O’Shea of McCalister. “Look at his physical stature – he’s kinda built like Willie (Jefferson). He’s long and he’s athletic. I thought he fit personality-wise, he fit in with the group really well. So, it’s nice to have him back. We’ll see how that all fits because we like what Thiadric Hansen is doing, too. We need to make sure we always keep guys around.”

O’Shea mentioned the work of Hansen, who had a sack and forced fumble last week and continues to improve by the second. Just FYI, the CFL tracks the snaps of its ‘Global’ players and Hansen has had 108 snaps on special teams and defence, registering three tackles, the sack and forced fumble. He has contributed more than any other global player statistically, although Edmonton linebacker Maxime Rouyer – who hails from France, but played at McGill – has had more snaps at 147.

RB Andrew Harris banged up his elbow early in Tuesday’s practice and the decision was made to have him back off from continuing.

“He’s fine. It just gives somebody else a chance to get the reps,” said O’Shea. “He’s a bit of a rep hog when he’s out here, so this will give him a chance to have a day. I don’t think it made him too happy, but he’s fine.”

Meanwhile, RT Jermarcus Hardrick was back at his post along the Bombers O-line on Tuesday.