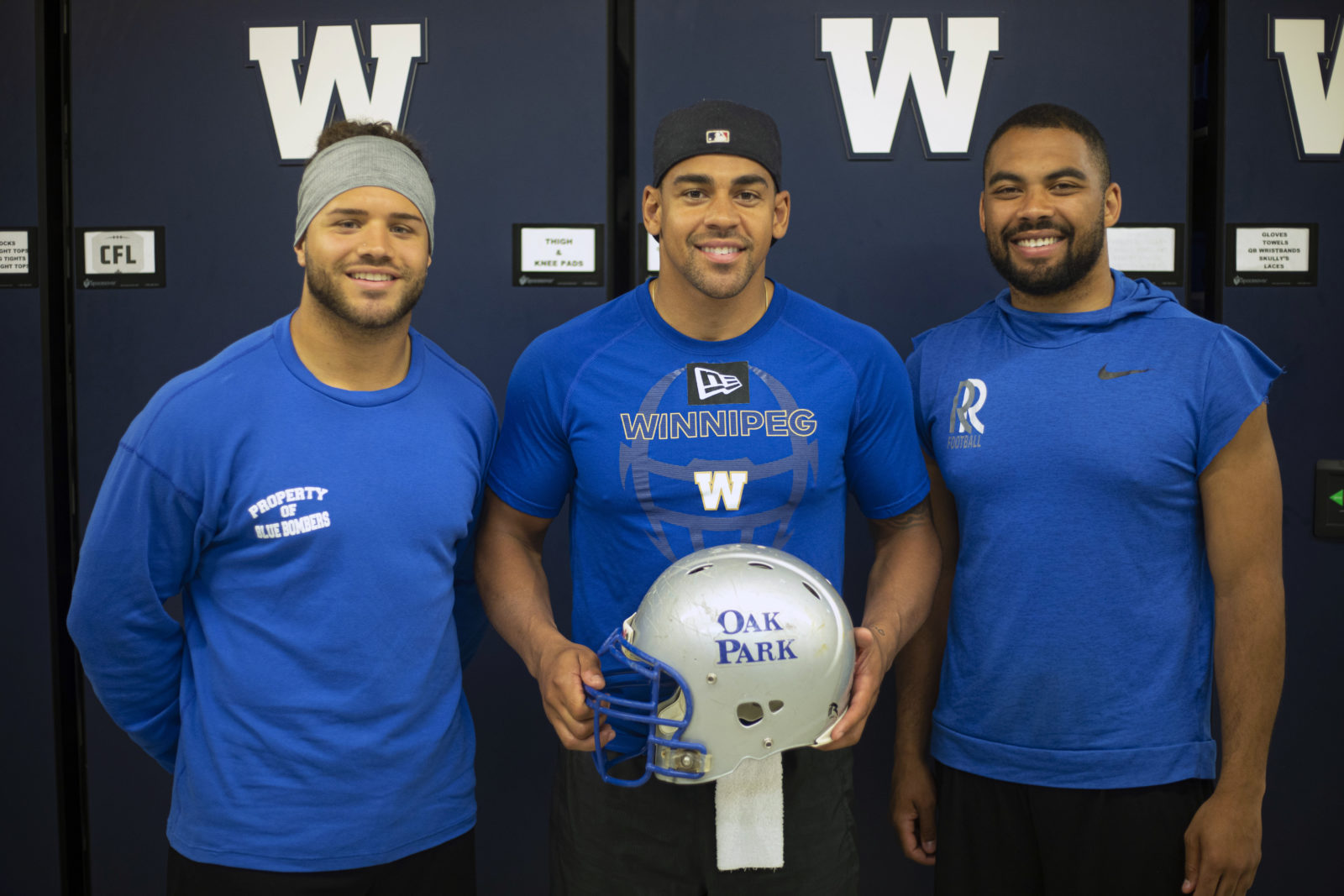 The doors to the Winnipeg Blue Bombers locker room swung open after practice Tuesday afternoon and immediately spotted sitting around a small table having lunch were Andrew Harris, Nic Demski and Brady Oliveira.

It’s just happenstance that the three Winnipeggers were sharing a meal together, but the scene does help represent what will be a significant moment in Blue Bombers history when the club takes to the field for Thursday’s home opener at IG Field against the Edmonton Eskimos.

Yes, when Harris, Demski and Oliveira run out of the tunnel Thursday, it will mark the first time in 73 years a Bombers team will take to the field with three players from the same high school on the roster.

All three are products of the Oak Park Raiders in Charleswood, marking the first time since 1946 that one high school has been so well represented in Bombers colours (credit: CFL historical expert @Stats_Junkie). That year, four members of the Kelvin Clippers – Doug Gauthier, Harry Hood, Bud Irving  and Don Smith – all suited up for the Bombers.

“It’s pretty cool,” began Harris. “We all came from a great program. You’ve got to tip your hat to Stu (Nixon, at Oak Park). He definitely had an intense atmosphere in high school with the way he ran that program and that translates to what guys do at the post-secondary or junior level. There has to be something said about that, that he got us ready for the next level, but when we were at Oak Park he had a certain expectation for us and we all tried to play to that standard. 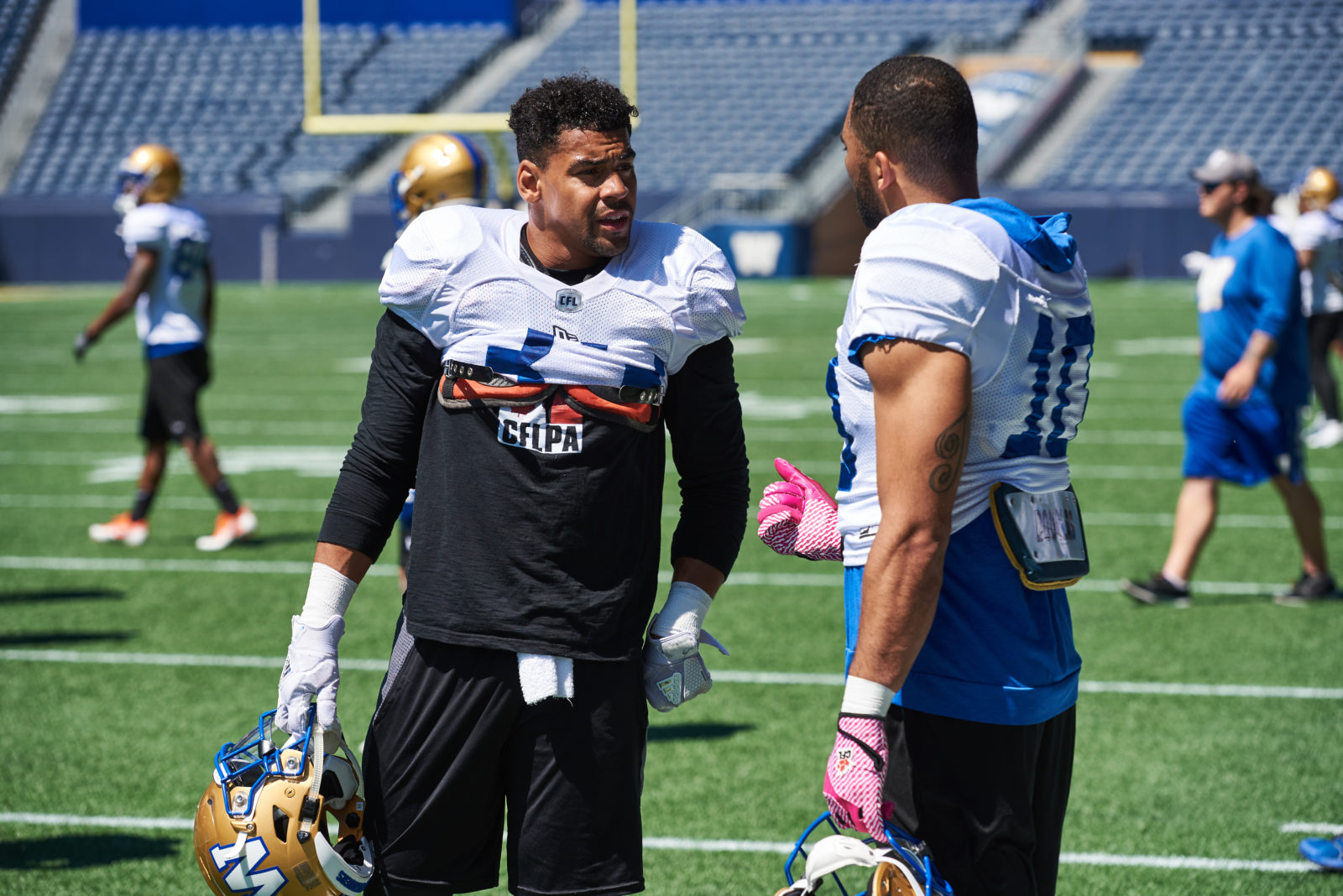 “There’s another kid at Oak Park right now that I’ve met, Rhyland Kelly, who could be something special, too, when he comes out of college. It’s amazing the athletes that have come from that school.”

The local connections with the Bombers don’t stop there. Linebackers Thomas Miles (Churchill Bulldogs) and DJ Lalama (St. Paul’s Crusaders) as well as offensive lineman Geoff Gray (attended U of W Collegiate, but played football with the Greendell Falcons) will also suit up for the Bombers against Edmonton.

“You know, you hear a lot about the guys coming out of Ontario and Quebec or Vancouver and the rest of B.C.,” said Demski, “but I think what has happened here with guys coming from the Winnipeg High School Football League is pretty amazing.

“Stu Nixon should be proud. He built a great program there. The track record speaks for itself. I’m just trying to come out here and play hard for my city and I’m sure those guys are, too. Andrew and I have had conversation after conversation about that and how great it would be for our city.

“And now we’ve got a third Musketeer from O.P.”

Harris’ arrival in the CFL came after a stint with the Vancouver Island Raiders junior team that saw him sign with the B.C. Lions in 2009 as a territorially-protected junior player. He joined the Bombers as a free agent in 2016 and is on the fast track to both the club’s hall of fame and the Canadian Football Hall of Fame. 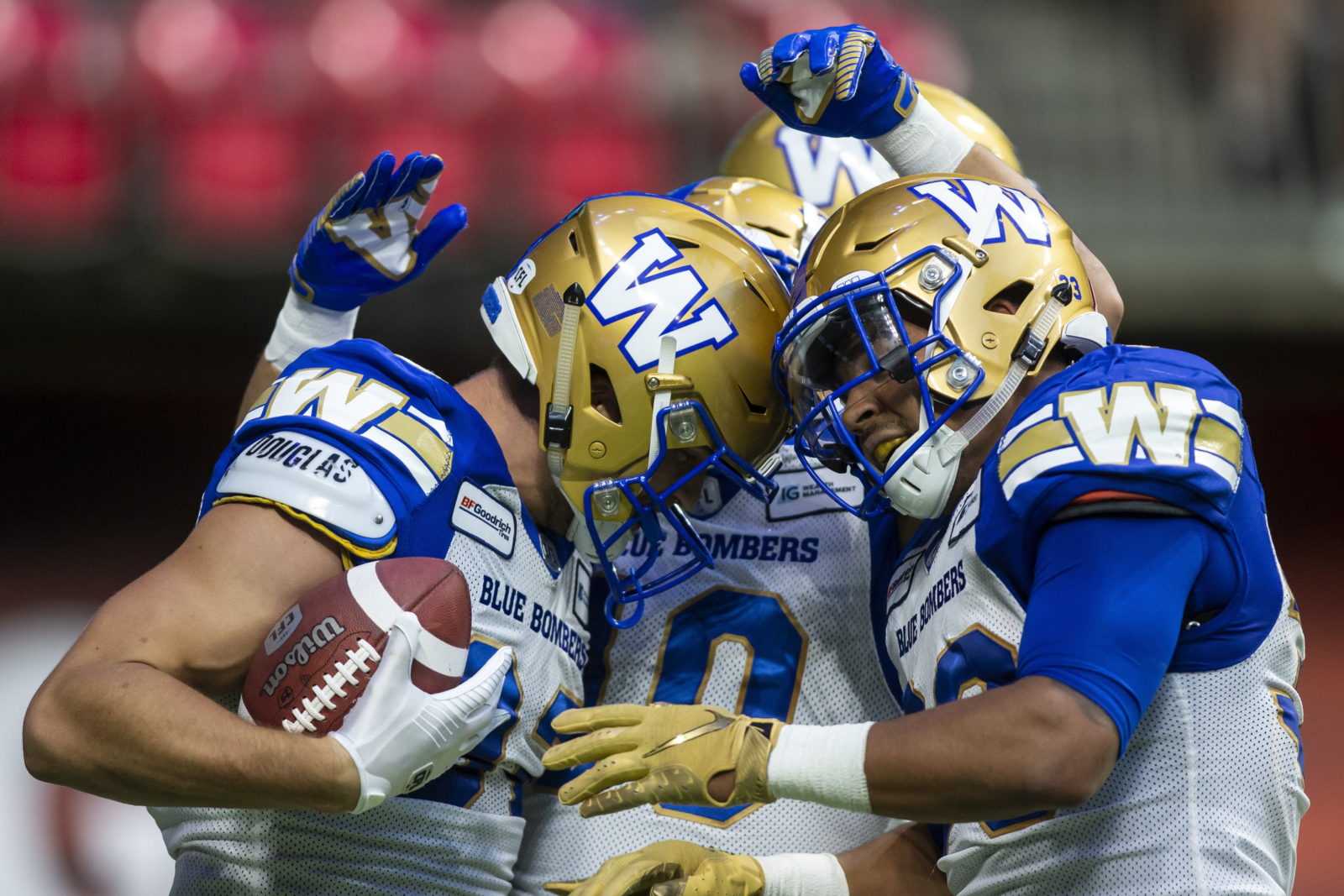 Winnipeg Blue Bombers’ Drew Wolitarsky (82) celebrates his touchdown against the B.C. Lions with teammates Nic Demski (10) and Andrew Harris (33) during the second half CFL football action in Vancouver, B.C., on Saturday June 15, 2019. THE CANADIAN PRESS/Ben Nelms

Demski starred with the University of Manitoba Bisons before being selected in the first round, 6th overall, of the 2015 CFL Draft by the Saskatchewan Roughriders. He signed with his hometown Bombers as a free agent in 2018.

And Oliveira put up superb numbers at the University of North Dakota before the Bombers selected him in the second round, 14th overall, of the 2019 CFL Draft.

“It’s crazy and it’s something you don’t hear about a lot – three guys from the same high school on the same pro team,” Oliveira said. “What did you say, you have to go back to the 40s to match something like this? That’s something special and it says a lot about the program we came from.”

Nixon has been front and centre with the Raiders program since 2002 and involved with the WHSFL for years. And he’ll be beaming with pride when Harris, Demski and Oliveira step on the field together on Thursday.

“Even when it was just Andrew out there, every week was a lot of fun for me to watch,” said Nixon when reached by bluebombers.com on Tuesday. “But now, every week is a lot of fun to watch. It’s ridiculous. I’ve got to applaud the Bombers, and Wade Miller, for not only seeing the talent locally but how that can help from a marketing and business standpoint.

“It’s incredible, and it’s especially incredible lately, where you’ve got a lot of guys coming out of Winnipeg High School Football League. Don’t forget, Sean Jamieson, who starts at guard for Montreal, is also an Oak Park kid. There’s a ton of kids and there’s going to be more. Vincent Massey has become so dominant there are kids from there that will move on to the CFL, too.

“The one thing Andrew, Nic and Brady all had in common during their high-school days was a certain amount of confidence in themselves,” Nixon added. “They also had an ability to make the right decisions – on the field decisions and life decisions – that helped lead to their success. I’m proud of those guys.”