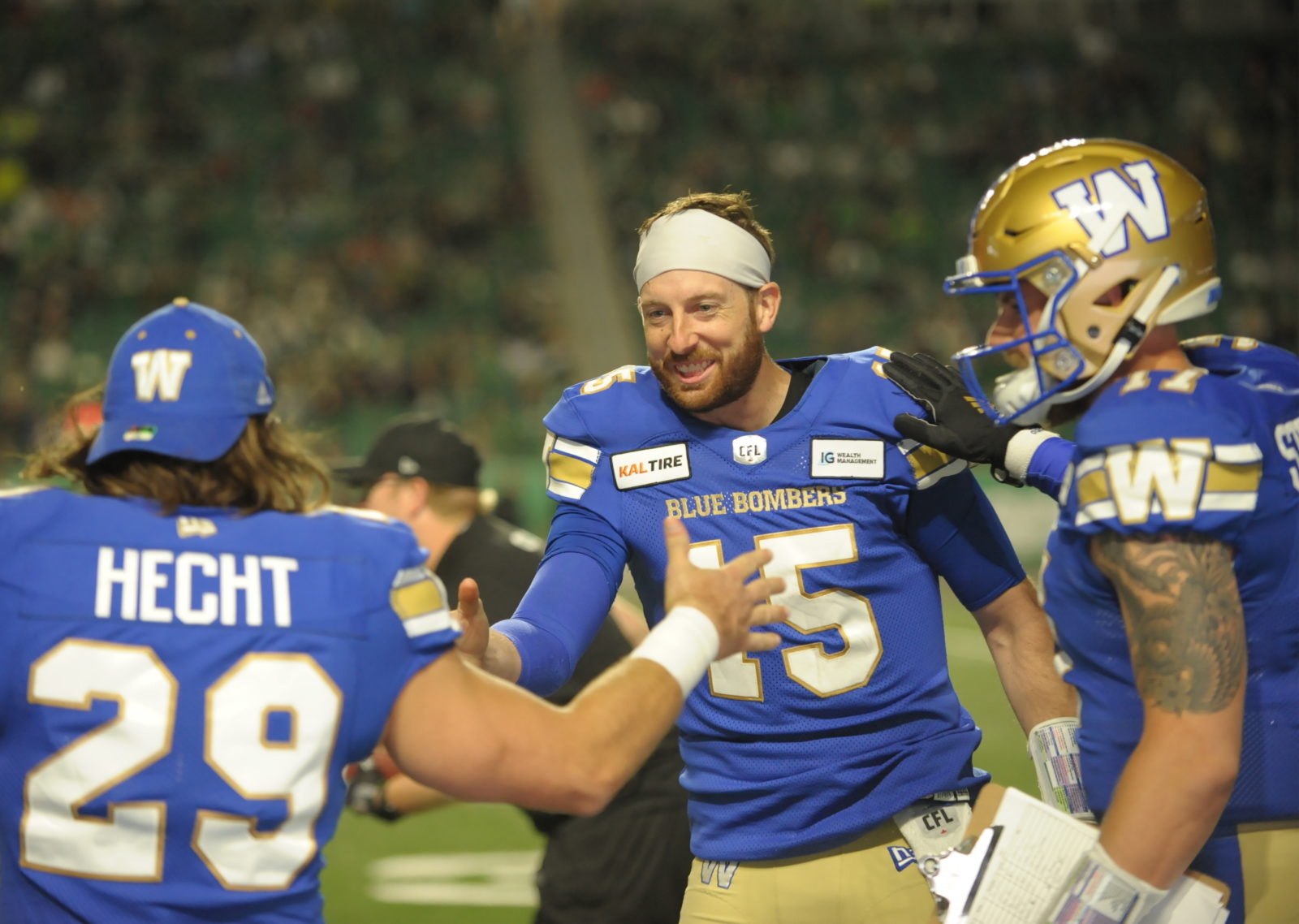 REGINA – There are some still-unanswered questions, still some tough decisions and still a ton of work to do before the curtain lifts on the Winnipeg Blue Bombers 2019 season in just over a week.

Still, consider this: in knocking off the Saskatchewan Roughriders 35-29 in front of an announced crowd of 28,706 at Mosaic Stadium Thursday night in their final dress rehearsal, the Bombers finished their preseason a perfect 2-0 – something a Winnipeg team hasn’t done since 1995.

Yes, yes, yes, we understand that will mean absolutely, positively nada when the ball is put on the tee in Vancouver on June 15th in the regular season opener against the B.C. Lions.

But, hey, a couple of good results sure as heck can’t hurt, either.

“Oh, it mattered,” said Bombers quarterback Sean McGuire, who scored the game-winning touchdown on a one-yard sneak with 2:15 left in the game. “There are a lot of rookies in this room and it was an opportunity to prove what they have and just get an opportunity to play football.

“I don’t care if we were playing in the parking lot or somebody’s backyard… this is the best game in the world. To be able to come out and play in this environment, I don’t care if it was preseason or not, we all wanted to win. I’m glad we got it.” 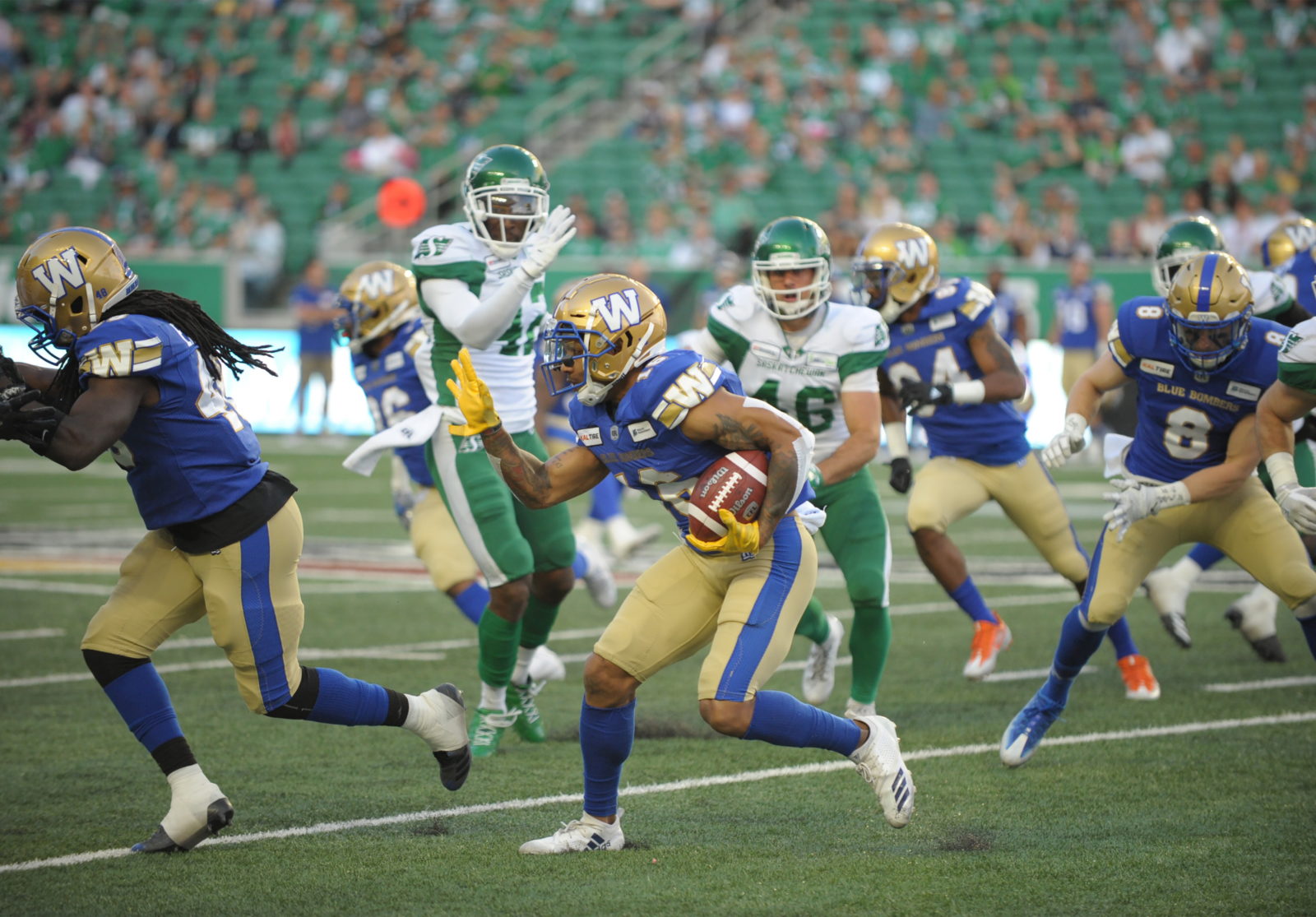 Preseason games normally have all the drama and pace of watching a glacier melt, but the Bombers and Riders actually served up a highly entertaining affair as six different quarterbacks combined to throw for five touchdowns.

The two TD strikes by the Bombers – Matt Nichols to Lucky Whitehead and Bryan Bennett to Kenny Walker – both covered 86 yards and were sensational, as the two receivers offered a glimpse at the speedy home-run threat the club has been seeking for its offence to compliment Darvin Adams for a couple of years.

“He’s a guy that I can throw a 10-yard pass and he can take it 80,” said Nichols of Whitehead. “That’s exactly what happened. We had a perfect play call for the coverage they had and he ran a great route.

“There are only a certain amount of people in the world that can take a play 90 yards and be weaving through traffic all the way down the field and have that kind of speed. Obviously that’s a dynamic weapon for us to add to the offence.”

The Bombers left a ton of regulars at home in Adam Bighill, Brandon Alexander, Marcus Sayles, Winston Rose, Anthony Gaitor, Willie Jefferson, Drake Nevis, Jackson Jeffcoat, Chris Matthews, Nic Demski, Jermarcus Hardrick, Pat Neufeld, Mike Miller and Justin Medlock. But the club got some splendid work by those in blue and gold Thursday night and they did exactly what they were tasked to do heading into this one: they will make the decisions before the roster cutdown Saturday night at 9 p.m. that much more difficult for the coaching staff.

“This will be tough,” said Bombers head coach Mike O’Shea. “We’ve got good team speed on offence and you look at the fourth quarter… two stops by the defence at the end with some guys flying around there. I thought it was good.”

O’Shea said the team will gather Friday afternoon to watch the game film and then the staff will spend the evening working on the roster before they make their decisions.

Nichols started for the Bombers, his first appearance since last fall’s West Final in Calgary, and played until late in the first half. He finished seven of 14 for 163 yards and the TD to Whitehead, but even more important, continued to showcase the mobility he has flashed all of training camp.

“It was fun for me to get in there and get some game action and play in this environment against a tough defence,” said Nichols. “There are a couple I want back, but overall, I was on all my reads, made some good throws.

“I talked about it before this game… it’s important to throw with live guys around you. It was just awesome get out there, knock some rust off and get ready for Week 1.”

With Chris Streveler dressing, but just handling the holding chores on placekicks, Bennett and McGuire split the rest of the work under centre. Bennett was 5 of 7 for 120 yards; McGuire finished 6 of 9 for 77 yards.

The Bombers took the lead on McGuire’s late score, but the defence stopped the Riders on two possessions late in the game to seal the deal.

“We had two teams competing for jobs and you want to win and it’s never easy to win, so we celebrate when we win,” said Nichols. “That’s the ultimate goal here today.

“Offensively, our couple young quarterbacks took us right down the field and took the lead a couple of different times and our defence made a couple great stands at the end. That’s obviously great to see. I think that momentum can carry over to the regular season. You just get that feeling of winning and you want more of it.” 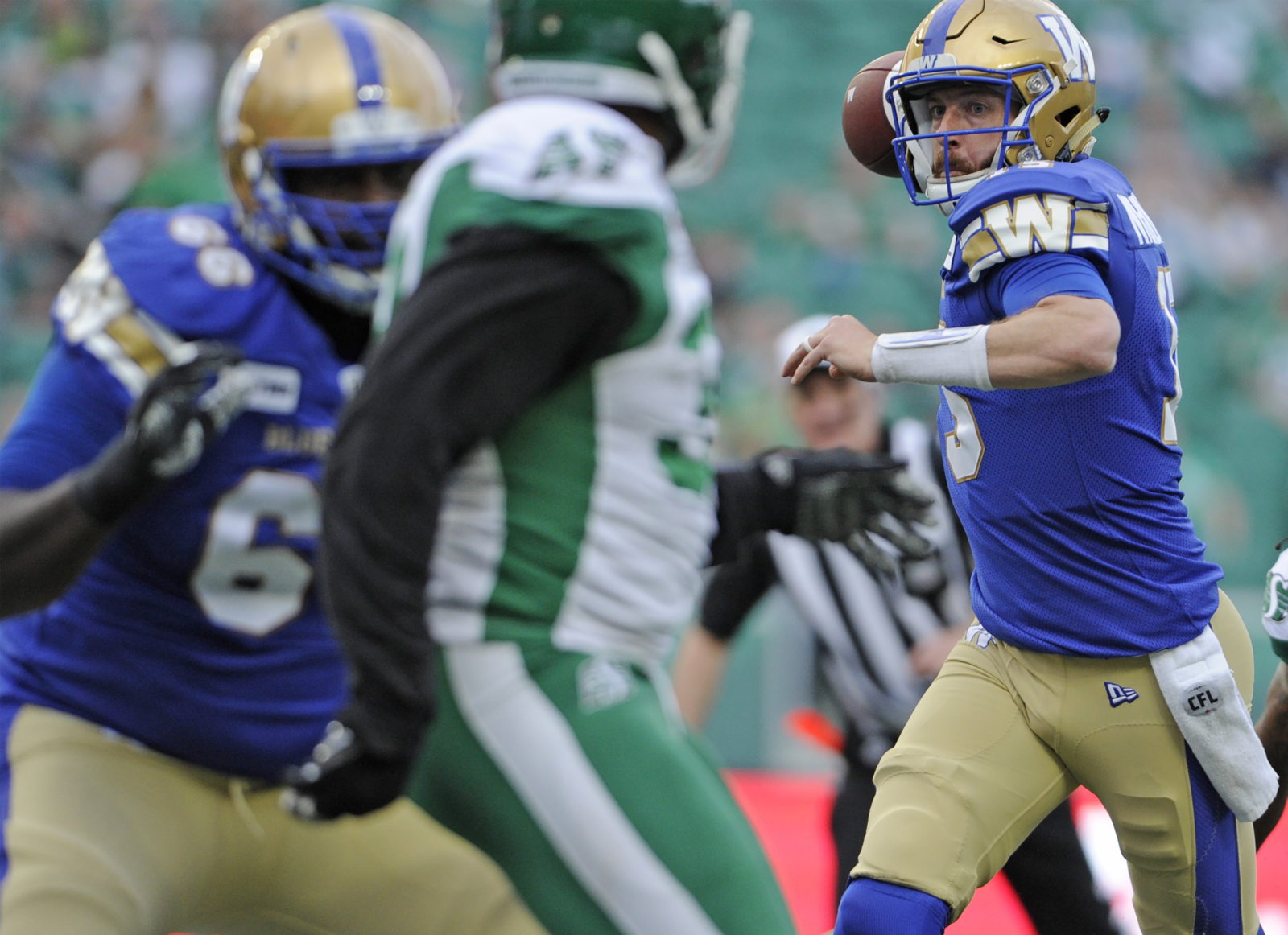