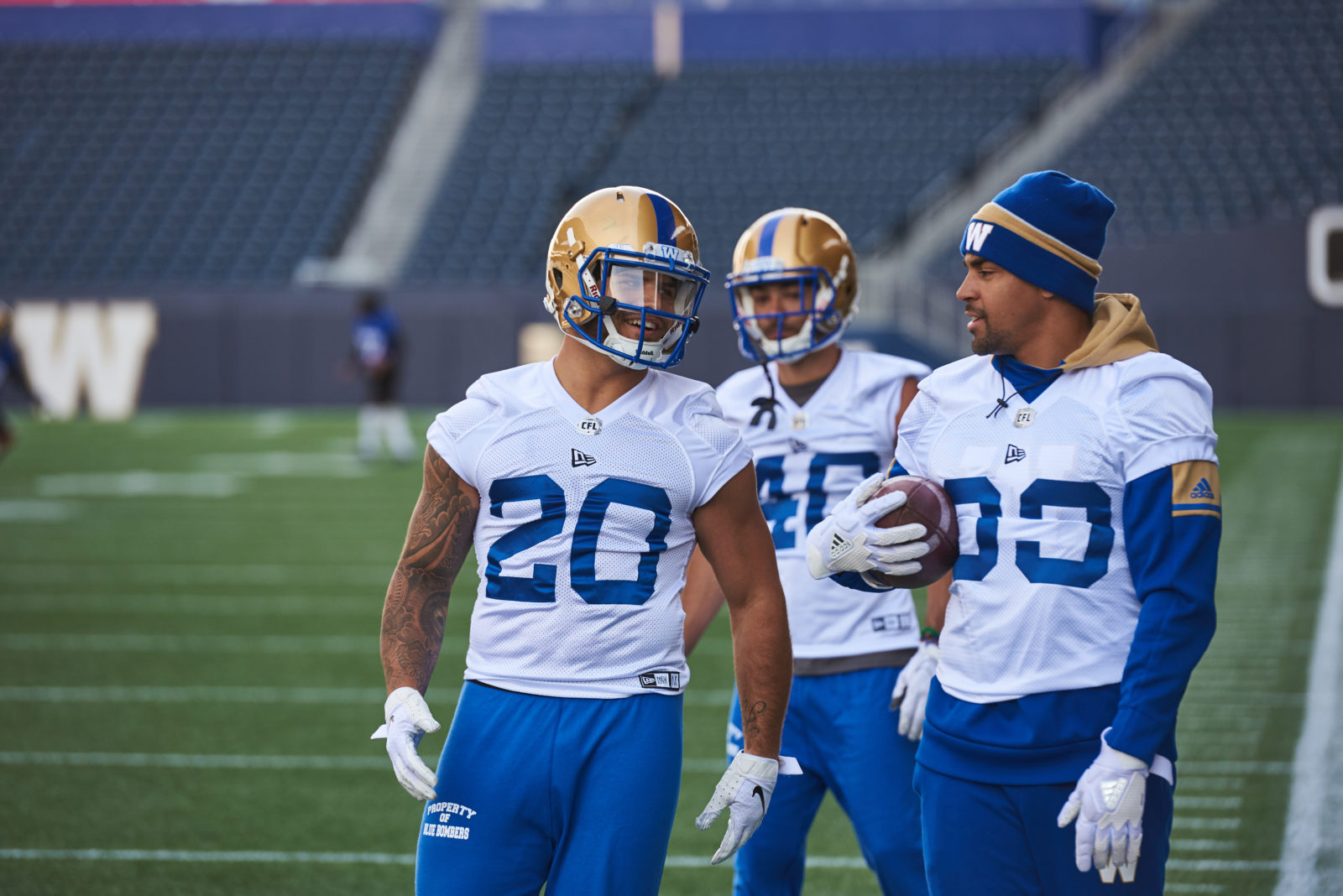 The Bombers are now through seven days of main training camp after their work Saturday morning. Here are our daily collection of notes and quotes from the session…

Saturday’s practice marked the first time RB Andrew Harris was a participant in camp. The club is simply taking a ‘load management’ approach to their offensive workhorse, the CFL’s two-time rushing champion.

“They just wanted to ease me into training camp,” Harris explained. “I had a busy offseason and they wanted to make sure I was coming in on full tilt and performing at a high level. It’s just being smart about my workload.

“Obviously I want to be out there with the guys and be battling. It’s hard to watch, but for me it’s what it’s come to now and I want to be flying around come Week 1.”

The approach here makes sense: Harris has carried the ball 428 times over the last two years, adding another 163 receptions while not missing a single game. He’s also 32 now, although that hardly seems to matter as he is coming off the two best seasons of his career.

That said, Harris had to be convinced to back off at the start of camp.

“Even today, I had the pads on and I had to be told numerous times not to go into any team drills,” he said. “I’m a competitor, I want to be out there with the guys not only working and grinding with them, but staying mentally locked in and helping the young guys we have. That’s part of being a leader and a teammate out here. I’m enjoying that role as well.”

HARRIS AND THE PROTÉGÉ:

Harris has been working closely with fellow Oak Park alum Brady Oliveira, as the club’s second-round draft pick gets his introduction to pro football.

“He’s doing great,” said Harris of Oliveira. “He’s definitely showing he can play. He’s a big guy, he’s quick and fast and what’s most impressive is how he attacks the meeting rooms. Right from Day 1 I told him he can sit beside me and so I communicate with him throughout meetings quite a bit.

“It’s crazy to think that a kid that’s 10 years younger than me, and even with (Nic) Demski and five-six years difference, to come here from the same school is pretty amazing to be out here with those two guys.”

A SHUFFLE IN THE TRENCHES:

McGloster (6-7, 329, Syracuse) played 30 games for the Orange, making 24 consecutive starts at right tackle fro 2016-17. Undrafted, he signed with the Oakland Raiders in January before his release.

Helms (6-5, 305, Wayne State) started 11 games for the Warriors last year and was signed as an undrafted free agent by Tampa Bay after this year’s NFL Draft before becoming available to the Bombers.

Additionally, the club has placed guard/tackle Manase Foketi  on the veteran exempt list. Foketi, who was expected to give the team the option to start three Americans on the OL, has not been in camp.

“They’re guys we like that we wanted to take a look at that just became available,” said head coach Mike O’Shea of McGloster and Helms. “There was a push by the NFL to sign some guys and bring them into camps and so when they become available is always hit and miss. We’ve got a couple of guys that are nicked up, too, so in order to practice efficiently and give the guys the appropriate amount of reps you’ve got to bring other guys in.”