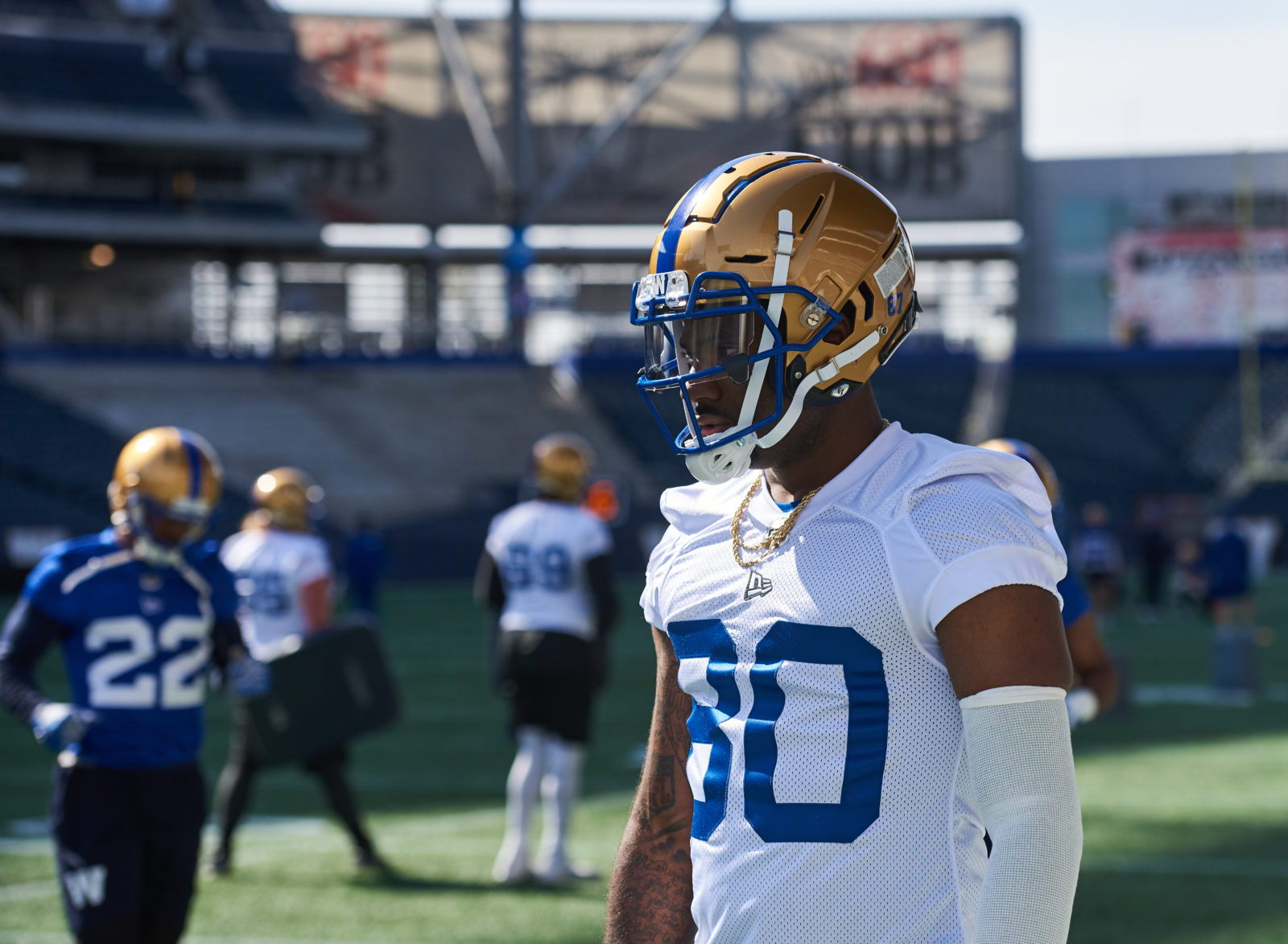 The Bombers wrapped up Day 2 of training camp in front of a good Victoria Day crowd at IG Field.

Bombers starting QB Matt Nichols has spoken over the last few days of camp about feeling the best he’s felt in years, especially after going through a rigorous offseason training program and having that many more months to heal up the knee he injured at the beginning of 2018.

Chris Streveler was asked after practice Monday how Nichols looks to him.

“Well, he’s got a visor on and so he looks a lot cooler,” said Streveler with a chuckle. “He’s been doing well. I got up here a couple of days early and we were just throwing around with him and he looks really good. He’s been in this league for a long time. He knows what he’s doing out here. He’s really comfortable and comfortable in the playbook and everything like that

“He looks great. It’s really fun getting to go into the film room and out on the field every day and work with him. We have that relationship from last year where now we’re kind of on the same page with things… we’ll bounce back and forth with ‘what were you seeing there?’ and talk about it.

“It’s really nice having that relationship with him and he’s somebody I definitely respect who’s been in this league and been doing it at a high level for a long time.”

The Bombers starting O-line unit featured Stanley Bryant and Jermarcus Hardrick at tackles, with the interior manned by Michael Couture at centre, Drew Desjarlais at left guard and Geoff Gray at right guard. Cody Speller also took a lot of turns at centre.

Pat Neufeld, the starting left guard, has not practised during the first two days along with running back Andrew Harris and defensive back Brandon Alexander. Head coach Mike O’Shea said he expects the trio to be healthy and on the field soon.

“He doesn’t need the work, either,” said O’Shea of Harris. “Obviously, he wants it. Certainly we’ve got enough tailbacks in camp and enough competition. You have hard enough time spreading out and getting guys enough touches, so sitting him down, our choice, for a few days or however and it’s not a bad thing for this camp.”

Here’s O’Shea on RB Brady Oliveira, the Winnipeg product who was selected in the second round of this year’s CFL Draft:

Among those fielding punts on Monday as potential return candidates were receivers Lucky Whitehead, Charles Nelson and Daniel Petermann and defensive back Mike Jones. 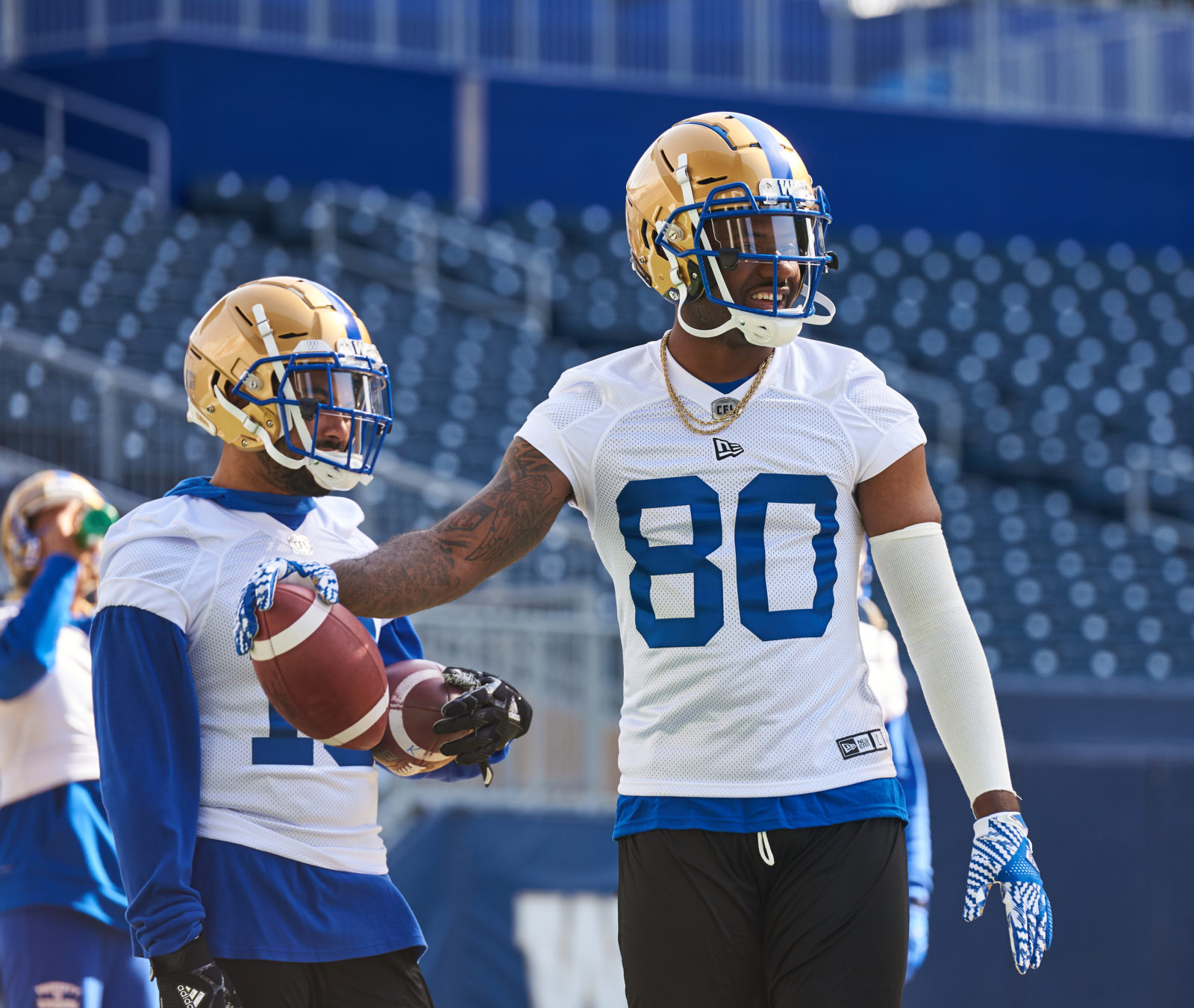 Chris Matthews continues to make one spectacular catch after another and has been arguably the best player on the field over the first two days. And, as was the case after Day 1, Matthews was part of a group that stayed on the field for quite a while afterward to catch passes from the Jugs machine.

“I looked over there earlier and Willie Jefferson was over there with a bunch of defensive guys,” said O’Shea. “We’ve got to get more Jugs machines out here, I guess, because the guys are going to be working hard. It’s going to make for long afternoons for you guys (media) because there are a lot of guys putting a lot of extra time in after practice.

“I love the leadership. I see a lot of commitment to excellence out here.”

DL Jonathan Kongbo, the Bombers second first-round draft pick (5th overall), is here, but not participating in practice yet. The University of Tennessee product suffered an ACL tear last October in a game against Auburn.