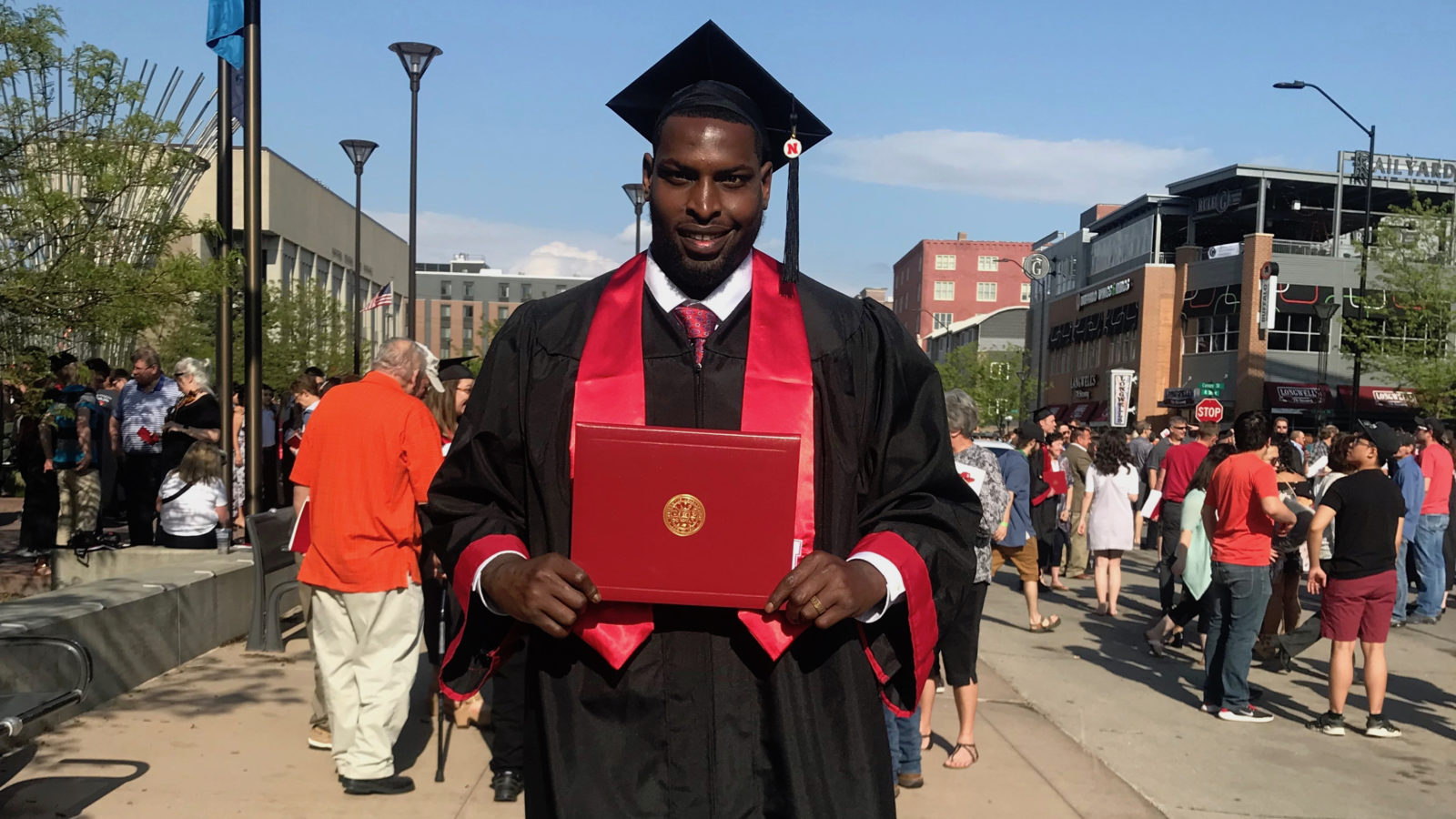 If it’s true that every picture tells a story, then study the man in the photo for a moment.

He’s there wearing a cap and gown, and the proud smile of accomplishment is dominating his face. It’s a moment worthy of congratulations and of celebration, and it has been perfectly captured.

Just FYI, that’s Jermarcus Hardrick of the Winnipeg Blue Bombers standing on a sidewalk in Lincoln, Neb. last Saturday after receiving his sociology degree from the University of Nebraska.

The Bombers locker room is dotted with men who have earned their college degrees, and in that respect, Hardrick isn’t alone among those who played the game and came out of university with more than just an opportunity to play professional football.

Yet to truly appreciate the sense of pride in that photo, you need to recall Hardrick’s incredible back story and how he grew up in poverty in Courtland, Miss. All of that is what fuelled him not only to play football, but to start writing a new chapter for the Hardrick family.

“So much went into this,” began Hardrick in a chat this week with bluebombers.com. “I was the first on both sides of my family to graduate. I just hope it can maybe give those who came up with a similar upbringing as me some hope. Just as important, it’s breaking the cycle in my family and it shows my kids they can do it.

“It means so much. I come from a big family. My grandmother had 10 kids – five boys, five girls – and so for me to be the first one and one of the youngest ones to do this is just so great. I had my aunts and uncles and cousins here. My mom and my step dad were here. We had to stand up at the graduation and when you talk about the first in your generation to graduate… man, I was bawling like a schoolhouse girl.

“I just enjoyed the whole experience and still want to stay in that moment.” 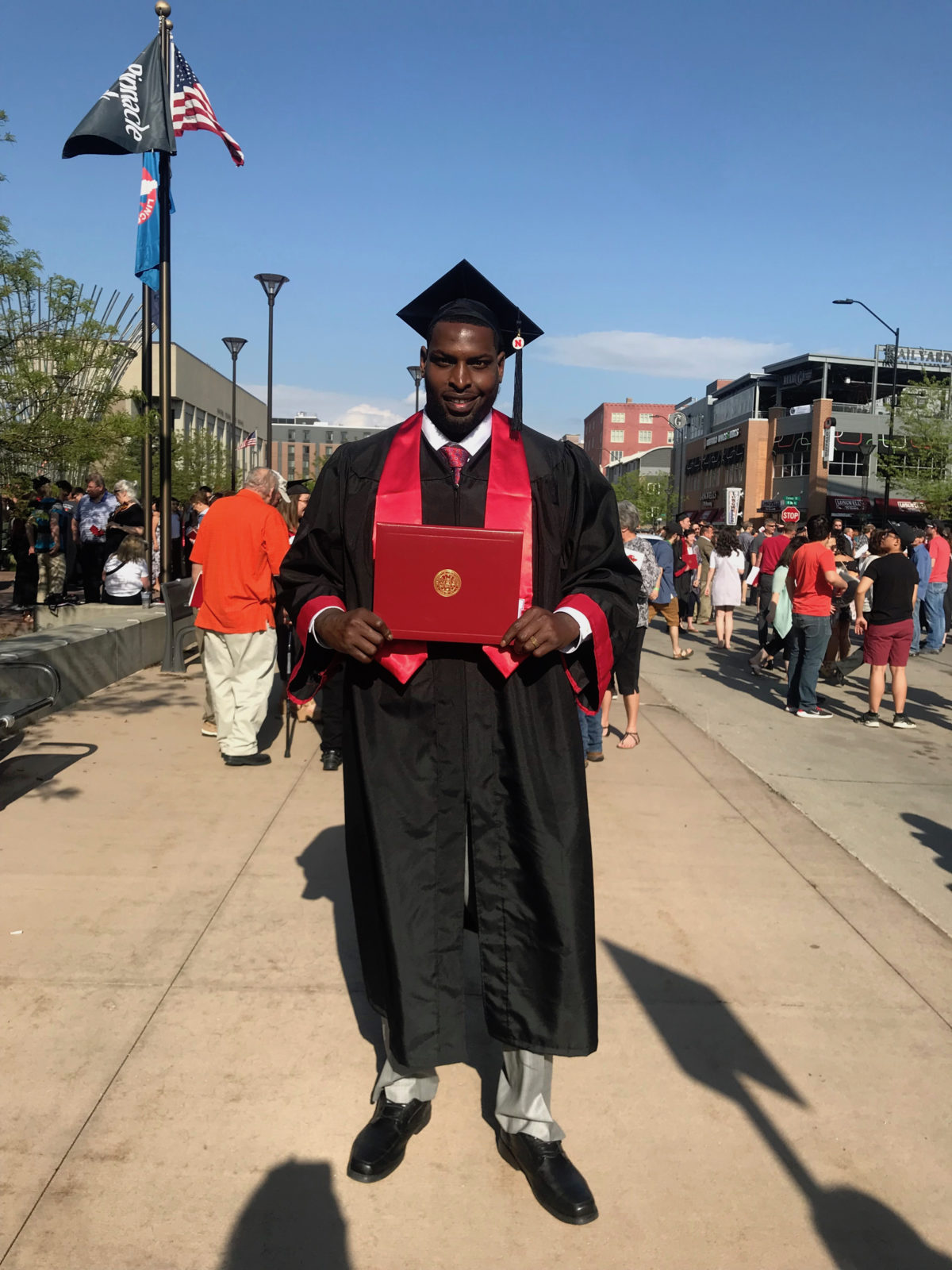 Study the man in the photo again. That cap and gown, that degree, that smile… Hardrick is so filled with pride he wants to ensure his story is told. But he wants it detailed with the clear understanding that he wouldn’t have been able to step onto that stage last Saturday without the help of so many along the way.

“My coach in junior college, my academic advisor at Nebraska, my wife, my teammates… all the people of Nebraska, they’re so much like the people in Winnipeg who are hard-working and care for others… there are so many,” said Hardrick.

“This is so important to me. I’m 28 years-old and I want to play as long as I can. But I also know that I’m on the last leg of my football career. It was good for me to complete this so that the transition will be easier for me when I get done playing ball.

“Part of this comes from being in the locker room and hearing stories from guys like Paddy (Neufeld) and Goose (Matthias Goossen)… I looked up to those guys a lot. I didn’t come up like them, but they accepted me as one of them. They showed me a lot of things I didn’t see growing up just in how they treated me. They always told me, ‘You need to go back and finish that degree, Yoshi.’

“I just wanted so much to be one of those guys who plays football, but had graduated also. I’d hate to put it above or after something, but it’s right up there with one of the top things I’ve done in my life.

“Coming from a small town where a lot of people don’t even graduate high school, I had never even thought of graduating college before until I met my junior college coach, who actually came up to a game last year in Winnipeg.”

Meet Jeff Sims, Hardrick’s junior college coach back in his days at Fort Scott and now the head coach at Missouri Southern State. Hardrick arrived in tiny Fort Scott, Kansas after leaving Mississippi an intelligent wide-eyed teenager who had nonetheless had hardly opened a book in high school. That cost him a chance to play at Auburn because he was academically ineligible. 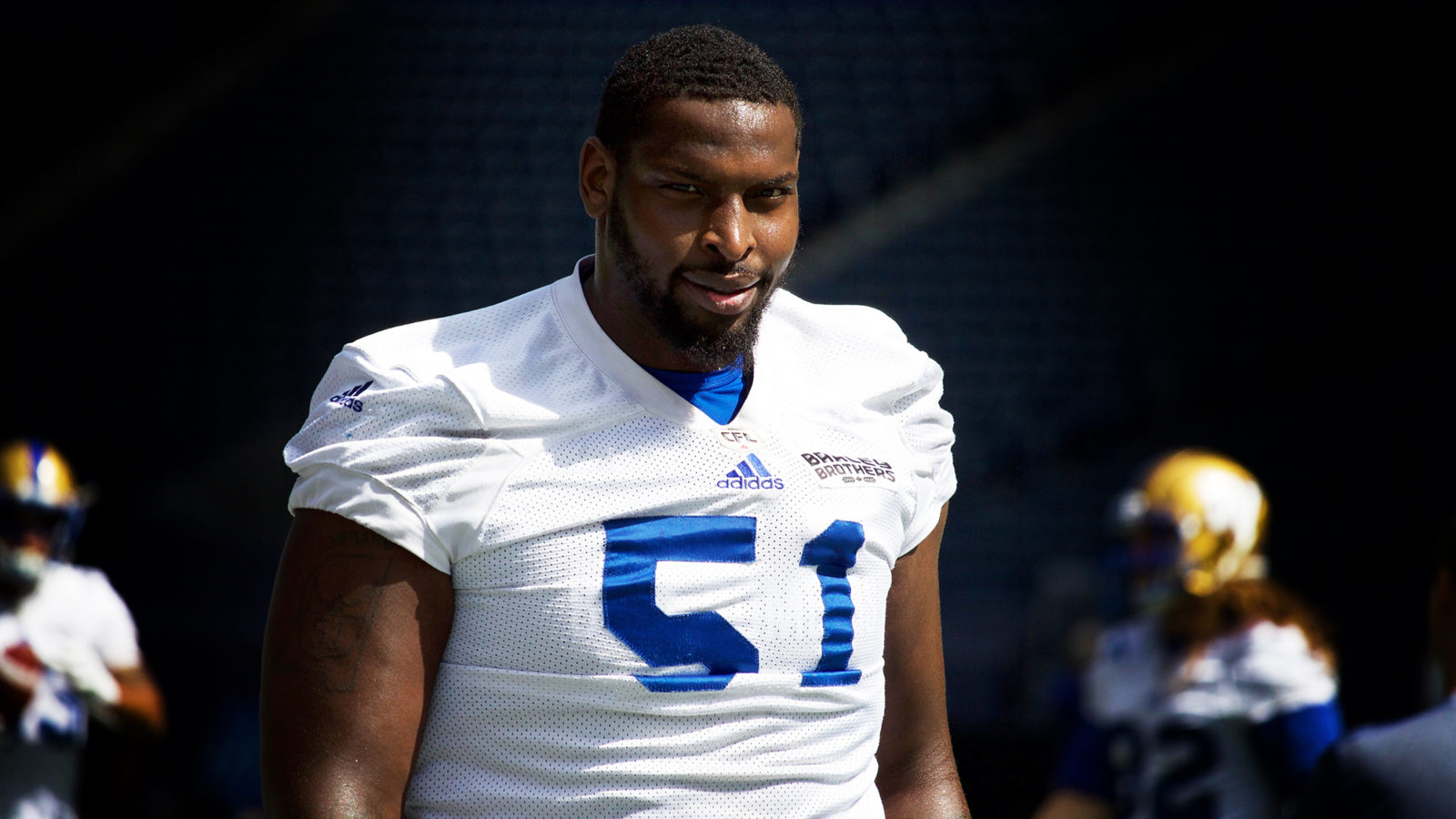 “When I went to junior college I told Coach Sims I was a good football player who went to a high school where we won a lot, but I didn’t really have to do a lot of work so I just got passed along,” Hardrick recalled. “When I got to juco he told me things were going to have to be different – I was going to have to go to class and I was going to have to work. I looked up and he saw on my face how shocked I was. He said, ‘Don’t worry. You’re going to graduate college.’ That was the first time I had ever heard that in my life. It gave me hope.

“For two years of my life when I was lost in Kansas he was the one who guided me and helped me make the choice to go to Nebraska. He’s still big in my life today.

“When I walked out of my last class at Nebraska I called him and said ‘We did it.’ We had a moment on the phone. There were tears everywhere and I could feel it on his side also. I just had to tell him ‘Thank you so much. I don’t know how I can ever repay you.’ He said, ‘You’re repaying me by walking on that stage.’”

Still, junior college isn’t university. And Lincoln looks like New York City compared to Fort Hays. Hardrick told the story previously of never driving a car until he got to Lincoln – and then having it towed away frequently because he didn’t know what a parking meter was. He had never pressed a button at a crosswalk to cross the street before.

So, that’s a lot to digest on top of going to class and training while starring on a big-time program like the Cornhuskers.

“Six years of me taking courses when I was in school, then in the offseason when I turned pro, courses online and he was there every step of the way texting me and calling me whenever I needed help,” said Hardrick. “On Saturday we had a chance to have a long hug, take a great picture. He was the second person who told me I was going to graduate when I got here from junior college.

“You know, I just remember how hard it was for me to trust him at first. Being from a predominantly black town I wasn’t around a lot of whites growing up. He was a white man giving orders and I didn’t know how to trust him. It took me two years to trust Coach Sims and I had to do it again. Dennis was one of the best things to happen to me because he never gave up on me.”

Goals have no expiration date on them! 🎓

“Just before we went up on stage and we were all lined up in our caps and gowns he sent me a picture of me sitting down there in a chair and he said, ‘We did it.’ That was another moment that hit me hard again, because I remember being a wide-eyed 19-20 year old who only thought about going pro and didn’t care about the ‘student’ part of ‘student-athlete.’ He told me he didn’t care about the athlete part, he wanted me to get that degree.”

Hardick’s support system at home was massive in this accomplishment, too. He and his wife Samantha have three children six and under, and during the Bombers season the workload of being a husband, a father, a player and a student can be overwhelming.

“My wife deserves so much credit,” said Hardrick. “I’d have to go to practice and then study film and then go study for my classes. She’d get the three kids in a room and help keep them quiet to make sure I could properly prepare for my test, and be ready for football.

“She is amazing. There’s no way I could have done this on my own and without her.”

Study the man in the photo for one last moment. See the cap and gown, the degree in his hands and the smile representing that sense of accomplishment.

Think of the people who helped get Jermarcus Hardrick here and who he might inspire himself.

Or has already inspired.

“I tweeted out that photo and I’ve already got a lot of feedback from guys in the CFL, guys in the NFL I know and people at home,” said Hardrick. “Even my mom, now she says she wants to go back and finish what she started, but couldn’t because she had to work to feed her kids.

“I’m just a small-town guy who didn’t know a lot besides being mad because my father wasn’t there growing up. I’ve had a lot of people help me up, but I never even thought about the influence this might have on others at all until I got a text from a friend of mine that said, ‘You have a wife, three kids and a football career and you made sure you walked (graduated). Man, that’s pretty cool.’