“We were pretty excited with each pick.” | Kyle Walters on the Draft 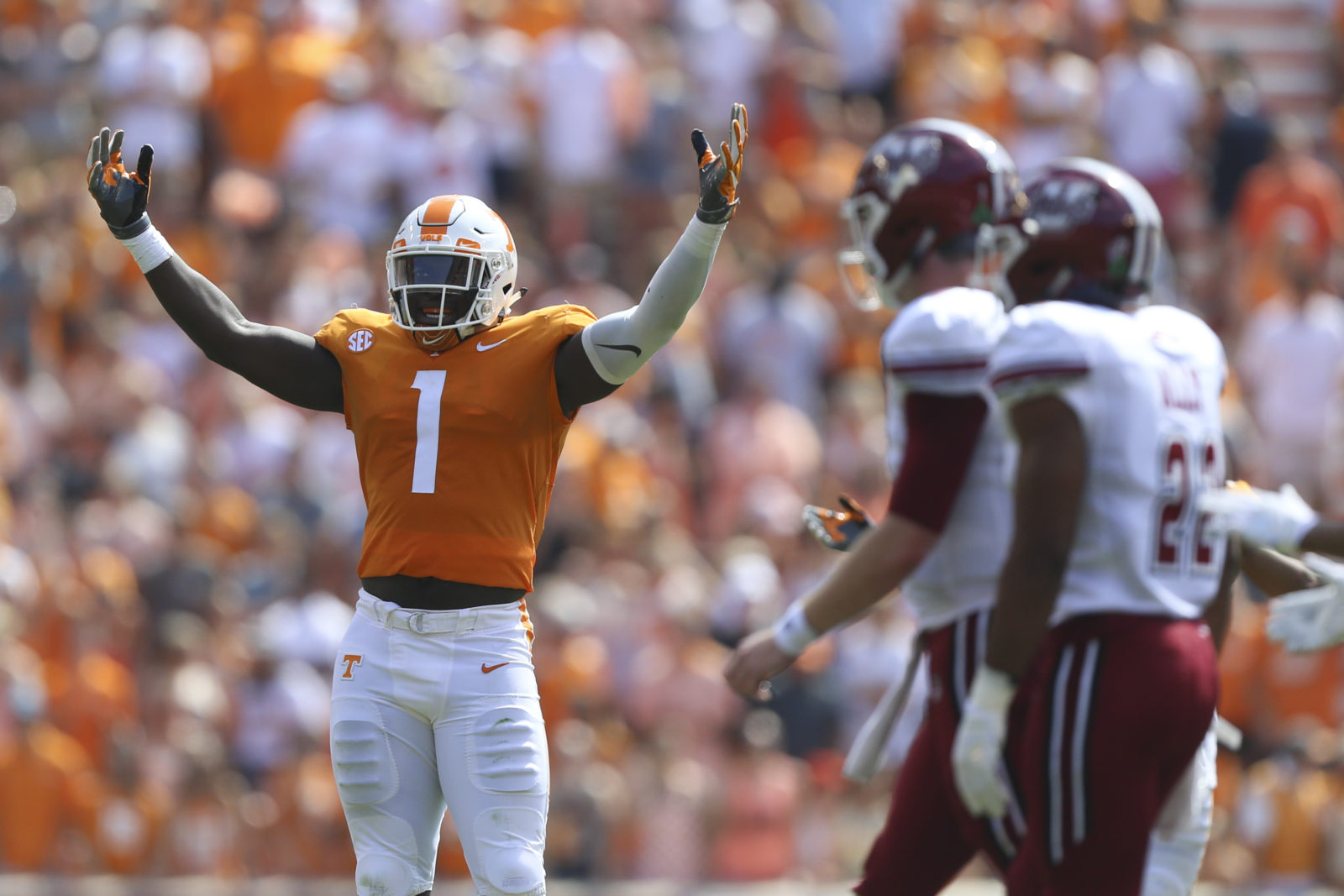 “We were pretty excited with each pick.” | Kyle Walters on the Draft

Winnipeg Blue Bombers GM Kyle Walters stood in front of a room full of media and opened with a statement he knows his counterparts across the Canadian Football League are all parroting today.

“Everybody feels good the next day after the draft because you’ve called guys that are going to be on your team,” began Walters with a smirk Friday morning, one day after adding nine players in the 2019 CFL Draft.

“But honestly, for us, the way it unfolded and the way we went through everything and our vision and hope for how it might go down went pretty much by the book for us. We were pretty excited with each pick.

“We’d make a pick and go, ‘In a perfect world, here’s what happens next. Let’s be patient.’ You talk through all the different scenarios and through much of the night Scenario A was coming through each time, which was nice.”

The Bombers had two picks in the first round, fourth and fifth overall, and used those selectins to add two players they hope could morph into starters in offensive lineman Drew Desjarlais and defensive end Jonathan Kongbo.

They next landed running back Brady Oliveira, a Winnipeg product who played college ball at North Dakota, in the second round and defensive lineman Connor Griffiths of UBC in the third.

And their fourth-round pick, centre Asotui Eli of Hawaii, may turn out to be the steal of the draft as he is recommitted to football after missing last year due to injury.

Walters spoke to the media for almost 24 minutes on Friday and here are our main takeaways from the session:

BEEFING UP THE O-LINE

The Bombers handiwork in Thursday’s draft should help soothe some of the concerns they had about their offensive trenches after losing centre Matthias Goossen to retirement and right guard Sukh Chungh to free agency.

Desjarlais has a nasty streak that reminds the Bombers brass of Chungh and if Eli, the fourth-round pick, flashes the same skill he showcased in 2016-17 when he was on the watch list for the Rimington Award as the best centre in U.S. college football, then the fight for the starting chore instantly becomes a three-man scrap between him Michael Couture and Cody Speller.

Most importantly, adding these two to a Canadian O-line crew that includes vet Patrick Neufeld, former first rounder Geoff Gray and two prospects from last year in Ben Koczwara and Matthew Ouellet De Carlo could give the Bombers some ratio flexibility and perhaps have them re-think their tentative plans to start three Americans up front.

“We wanted an offensive lineman at No. 4, and there were three we thought we’d feel comfortable with that we were hoping to get there and Drew was the top guy. We just like the tenacity that he brought. Doing the film on him he was really good and really aggressive and then seeing him at the combine, his testing numbers were good, the best of the bunch.

“He’s a really good athlete, and combine with the way he plays physically he was our top guy. He was the guy we wanted.” 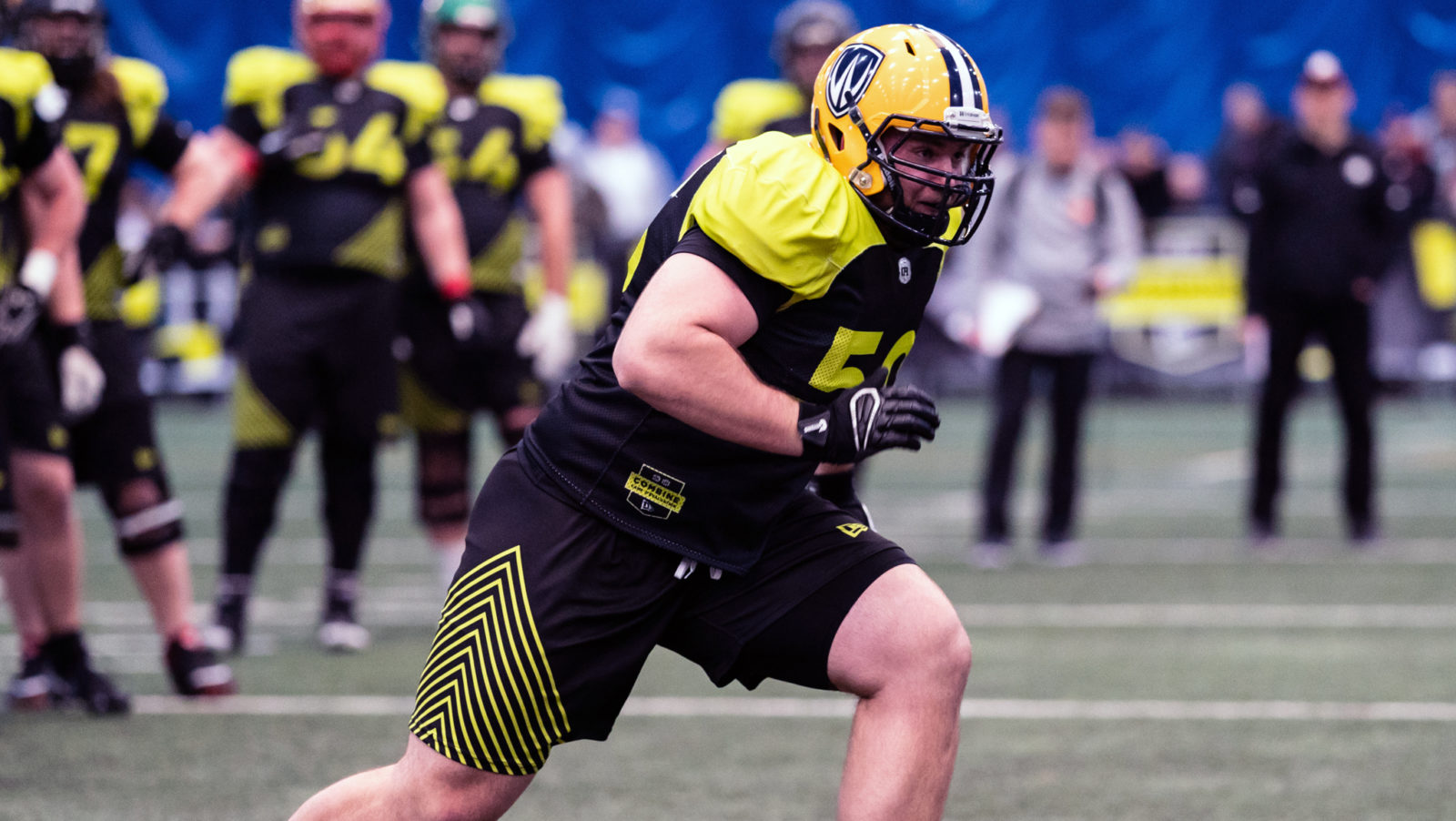 TOO GOOD TO PASS ON

There were a couple of potential red flags with University of Tennessee defensive lineman Jonathan Kongbo heading into Thursday’s CFL Draft.

First, he suffered a season-ending ACL injury last October in a game against Auburn. And second, his skill set is exceptional enough that there was some thought he might still get drafted in the NFL or sign a priority free agent deal.

The Bombers did their homework on both of those concerns before Thursday and comfortable in the answers on both, were thrilled to get him fifth overall.
“He’s the one where you do the film and you’re watching this long, athletic, aggressive, physical player playing at the University of Tennessee in the SEC against big-time opponents,” said Walters. “As a group, Ted (Goveia), Mike (O’Shea) and I are going, ‘You just don’t see this very often in our draft, the film that you’re watching.’

“In our mind he was the top prospect in just football ability and what you’re watching on film. Obviously, the concern was the NFL interest with a player like that and then he unfortunately suffered a knee injury and had to have surgery.

“With two first-round picks he’s just too good a talent to not take and take our time with him until he gets healthy.”

The Bombers wanted to address needs on the offensive and defensive lines with their first two picks in the draft and had hoped and prayed that Winnipegger Brady Oliveira, a running back to starred at North Dakota, would be available in the second round 14th overall.

Walters admitted there were some tense moments between the Kongbo selection at five and when the club was next scheduled to pick. And when Oliveira was still there, they pounced.

“I’ll tell you what, he takes football serious,” Walters said. “We had him in here the other day and the first thing that comes across is this man loves football and takes it serious. He will do whatever it takes to get on the field, whatever is asked of him, it doesn’t matter.

“He is physical, strong, quicker than fast… it’s similar to what Andrew has. He’s quick in the hole, he’s physical. He was under-utilized as a receiver, which a lot of the backs are in the American game, but he’s got the ability to grow into a receiver and do the sort of stuff that Andrew does, which is why we liked him as a match in Paul’s (offensive coordinator Paul LaPolice’s) system and what we do here.” 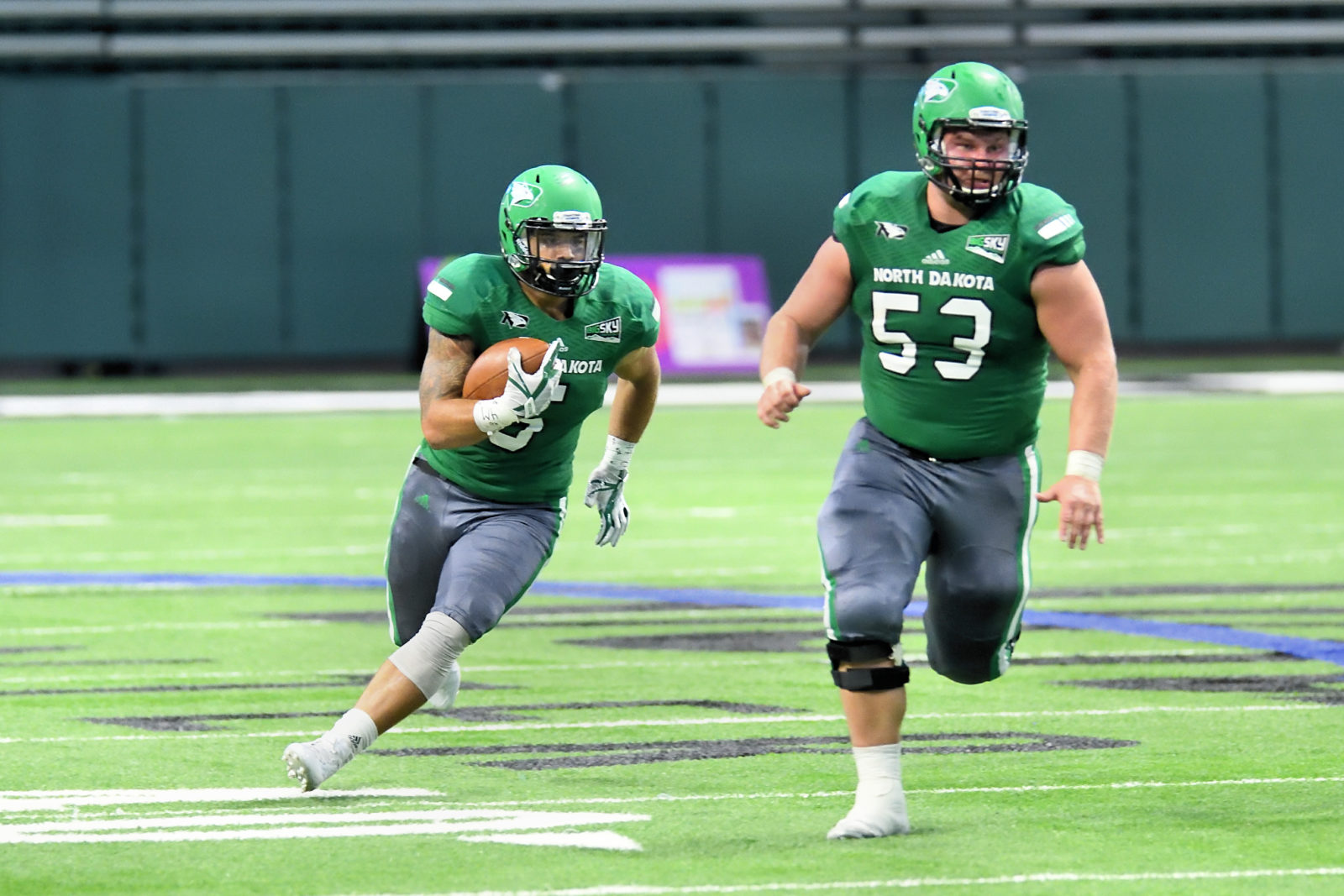 Eli did not play last year after suffering a knee injury and there was some speculation the former star centre with the University of Hawaii Rainbow Warriors was done with football. It turns out Eli has a family connection Bombers Assistant GM Danny McManus, and the Bombers did their homework on whether he still had interest in playing.

He does. And if he can get his game back, this could be massive.

“You just look at his pedigree where he was a starter at Hawaii,” said Walters. “His film is unbelievable playing big-time college opponents… big kid, quick in short areas, strong off the ball.

“His football future was uncertain to him and his family for a while. But recently he got the bug back and this is something he decided he wanted to do. We were in touch with him. Great kid. Wants to play football, committed… he was out of football for a year now, so it’s going to take him a bit to get it back and get back in football shape. But he’s healthy and ready to go and he’s a really interesting one, similar to Kongbo and at that spot in the draft way too talented and way too good a pedigree to not take a shot.

“If we can get him back to what we saw on film against UCLA and similar opponents he’s going to be really good.” 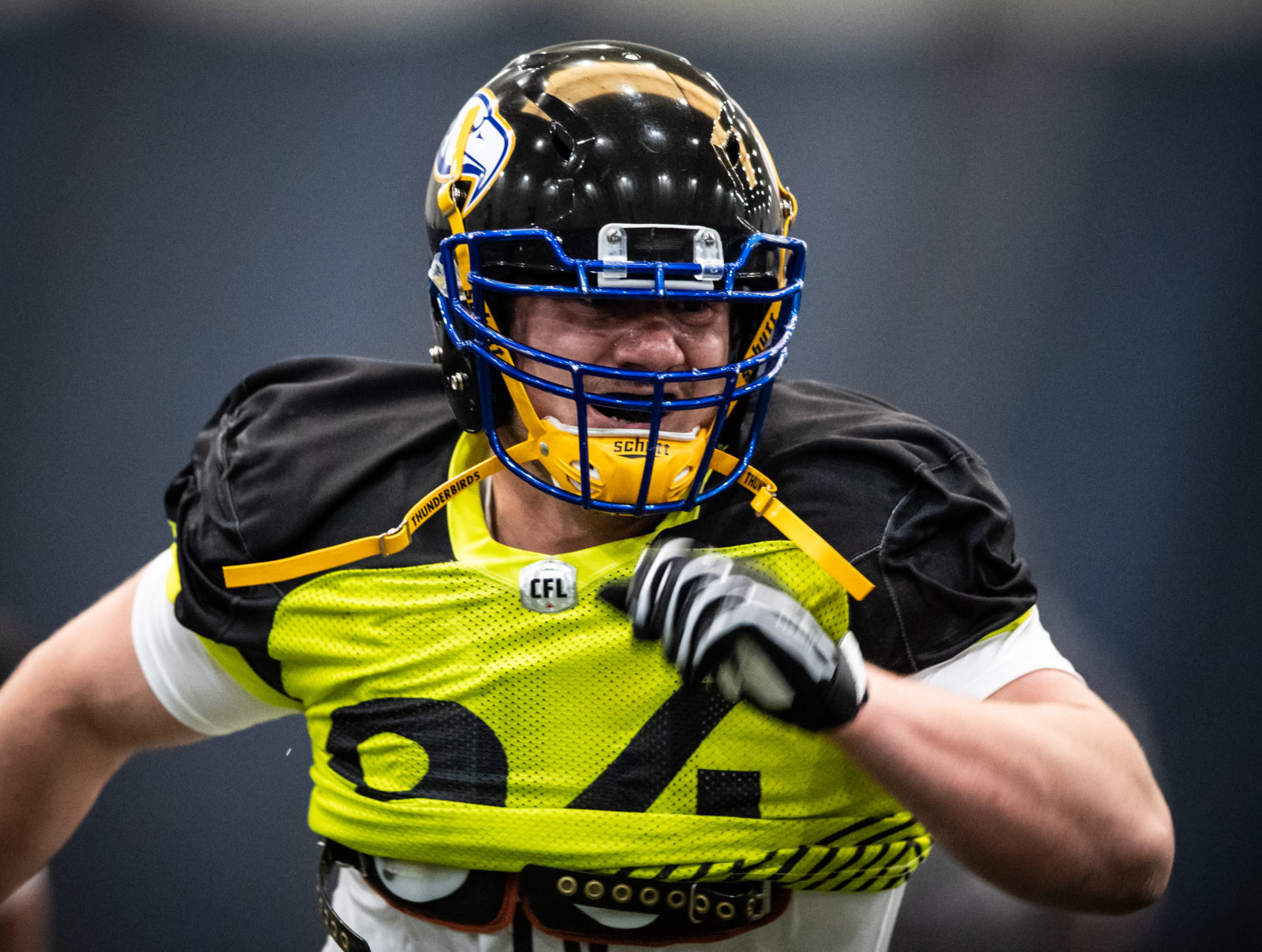 A WORD ON THE REST

DL Connor Griffiths: “The general consensus is he was the best interior defensive lineman. His film was good, there’s nothing flashy about him but he’s a hard working tough kid. Probably at the combine his numbers are why he fell, in my opinion. His testing numbers weren’t great, but the strength of him is on the field. He’s a playmaker, not a tester. He’s going to fit into our locker room. He’s a great young man who is going to give you everything he’s got every single time.”

WR Malik Richards: “Testing numbers were great… productive… he showed up at the combine and was right in the mix with all those other guys running fast 40s. He’s athletic, strong and was the last name on the board of receivers from an athletic standpoint.”

DL Tariq LaChance: “We didn’t know much about him. He showed up at the Western Combine and we instantly called (Manitoba head coach) Brian Dobie after seeing this kid for 10 minutes and said, ‘Who is this kid with the Bisons helmet?’ Brian walked me through the whole story and he’s got a bit of a history that is not a traditional way of getting here. We had him in here a few years ago when he was with the Rifles as a territorial pick, when he was a fullback. He’s super-athletic. Very explosive. We showed Glenn Young his tape, his combine tape, and Glenn raved about him. He’s different. He’s close to 260 pounds, it’s the way he runs and he’s violent on the field. There’s not a lot of football in his past, but he’s going to come in and get coached and I think his upside is very high.”

DB Nick Hallett: “2018 was a little disappointing for him because he dealt with some injuries. When you go back and watch his 2017, he was as good a defensive back as there was out there… he was running around, making plays, striking. He’s going come in and take reps at safety and play special teams.”

DB Kerfalla Exumé: “When we went through and watched his special-teams film… you could make the case that out of anybody he was the best special-teams player at the draft with his want-to and his attitude. He’ll be much more further along than other guys on special teams because he’s done it at the U Sports level.”