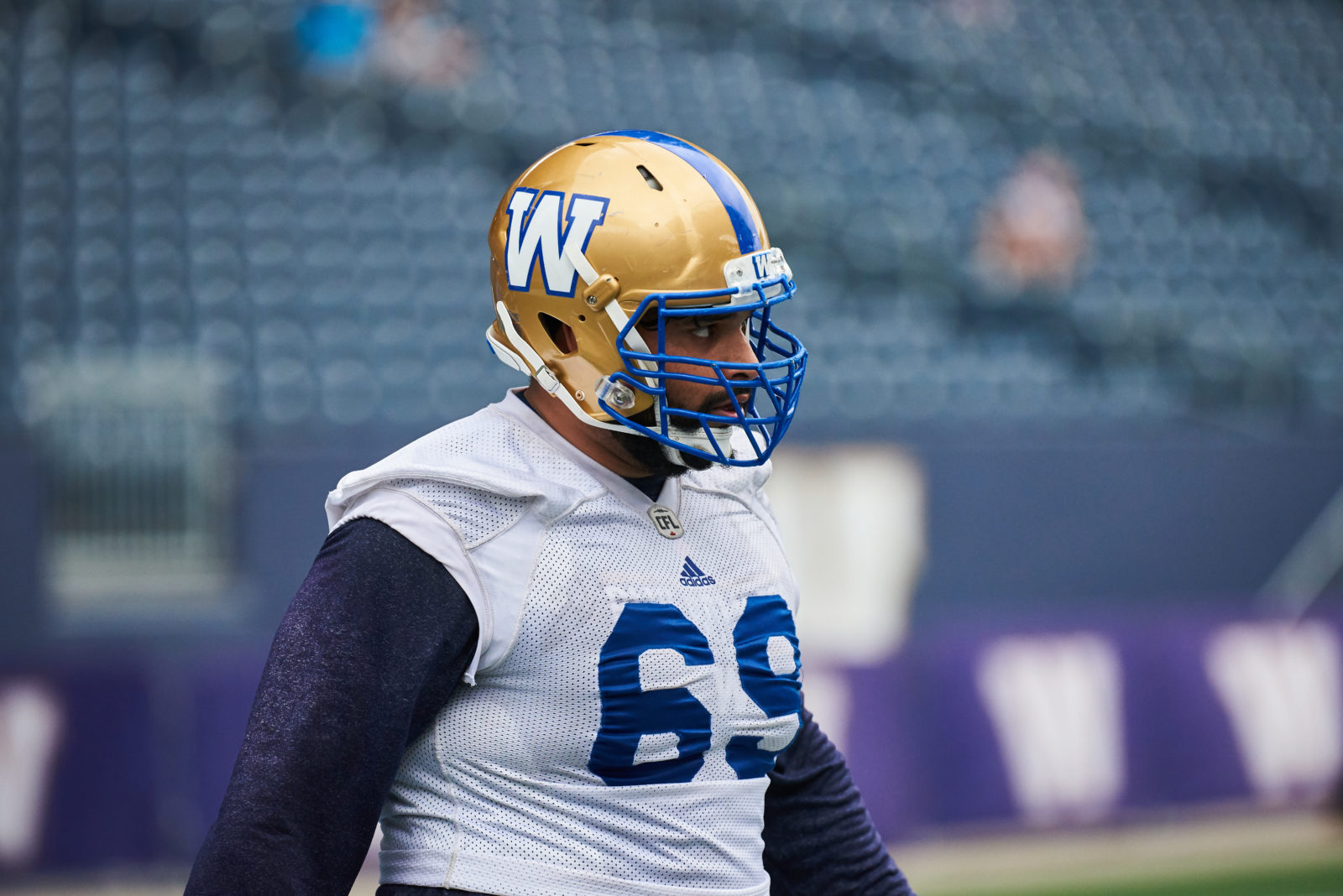 VANCOUVER – It was earlier in the week – long before the Winnipeg Blue Bombers settled into their hotel here in downtown Vancouver – and Sukh Chungh was on the prowl for tickets.

“Hey Petermann,” the Bombers veteran guard bellowed across the locker room to rookie receiver Daniel Petermann, “you got any tickets?”

Here’s the deal: Chungh is back on home turf for this weekend’s game against the B.C. Lions and could have up to 30 friends and family in the stands Saturday night at B.C. Place – about a 40-minute drive from Terry Fox Secondary School in Port Coquitlam where this now hulking 26-year-old first pulled on a helmet and shoulder pads.

“I’d always been a big kid,” began Chungh in a chat this week with bluebombers.com, “and when I was in Grade 7-8, coaches from Terry Fox came to my middle school looking for guys. I had played sports my whole life and so I signed up for football. I wasn’t really very good in Grade 9 or Grade 10, but progressed in the weight room and on the field.

“Back then I never thought I’d be where I am today.” 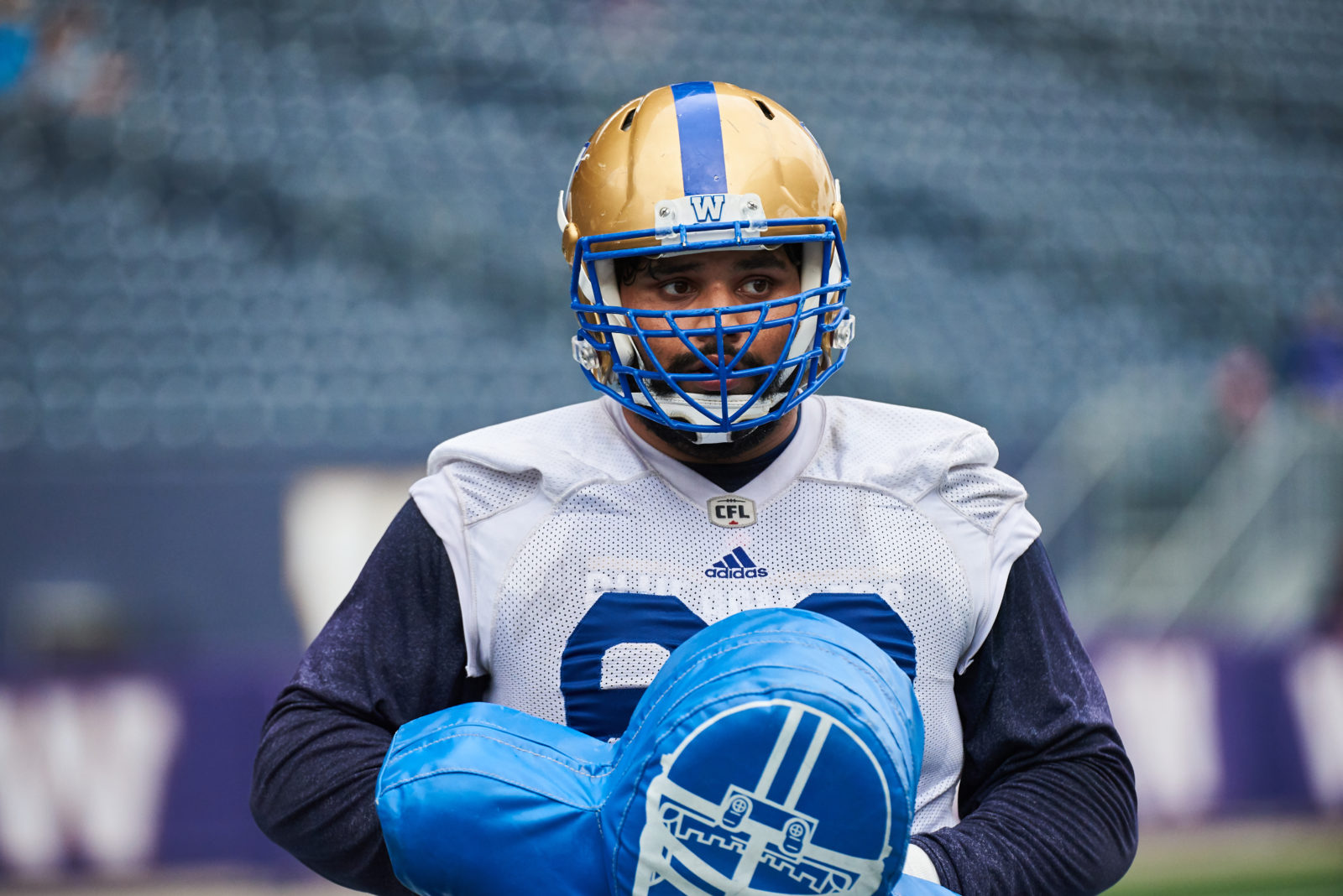 Where Chungh is today is the exact same spot as he was when he first walked into the Bombers clubhouse in 2015 as the club’s first-round pick, second overall – he’s a starter at guard, and save for two games at the end of the 2016 season when he was told to take a seat to heal up for the playoffs, has never missed a contest.

He is exactly as advertised from the day the Bombers drafted him, when TSN draft guru Duane Forde referred to him – in a complimentary way, especially for an offensive lineman – as a ‘nasty piece of work.’

But Chungh has morphed into much more than that over the last four years. He’s an excellent fit on an offensive line with a diverse set of personalities that all mesh so well. And he’s become one of the leaders in a Bombers clubhouse stacked with them.

“As a rookie, it’s just so different. It’s eyes down, ears open,” Chungh explained. “That’s how I took my rookie year. It was different then and that’s why I think Coach O’Shea and Kyle Walters deserve a tremendous amount of credit for the atmosphere in here… it’s a strong team on the field, but a very strong, tight-knit locker room.

“I just try to be accountable to the guys in this room. Week in, week out, I know I’ve got to show up to work. And when you see guys like (Matt) Nichols and (Adarius) Bowman and (Weston) Dressler, guys who have 10-plus years in this league that come to work every day at 6 a.m. and they don’t have to be in until two hours later than that… me coming in as a rookie and seeing that set an example for me as to how it needs to be done.”

That’s the Chungh many who follow the Bombers have come to know. But Chungh is also a first-generation Canadian whose parents both immigrated from India when they were teenagers before marrying here in Canada. He is the first in his family to play football and the first to earn a university degree, graduating from the University of Calgary in communications and geography. 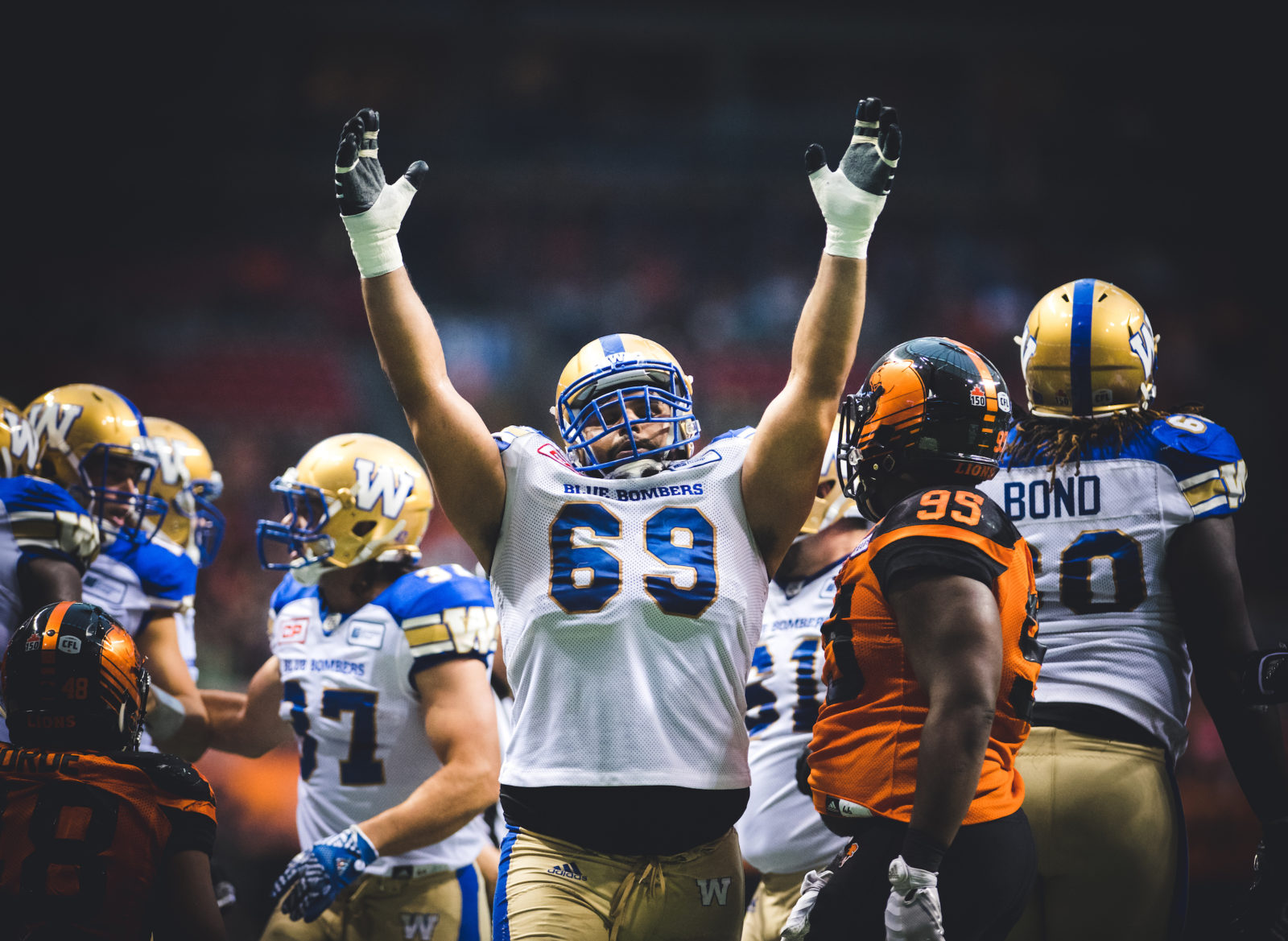 “I’m from a tight-knit family and growing up, I always looked up to my some members of my family because they were first-generation Canadians like me, but they were older,” said Chungh. “I saw them progress and then own their own businesses and take on their own adventures in life. I just knew that whatever I chose to do I had to be all-in to be successful. There’s a doctor or two in my family now and I’m very proud of that.

“But that degree is all framed up in my house. I’m pretty proud of that, too. When I left home at 17-18 to go play football and to be able to tell my parents ‘I’ve got my school paid for’… that was special. I chipped away at it and then knew getting a degree was achievable. My coach at the time, Blake Nill (now at the University of British Columbia), always said, ‘Sukh, I want you to do two things: I want you to graduate and I want you to win a championship.’ We never won a championship, but I got a degree and I’m proud to say that.

“At the time, I was just happy to be graduating. But now I’m able to say that to my nieces and nephews and then to have them say, ‘Oh, you went to university…’ it’s like it opens up the possibilities to them. When I was growing up I never even thought about if wanted to play football, I had to go to university or that football could help me get my school paid for.”

Chungh’s mother Kulwinder has retired, but his father Balraj still works as a contractor. In the offseason, Chungh helps him with home renos and builds and figures if he wasn’t playing football he’d be ‘working somewhere getting my hands dirty.’

He’s a lunch-pail and hard-hat, no-nonsense player. What you see is what you get from a man eager to simply punch the clock daily and do his job.

“I’ve played against Sukh since he was in Grade 10,” said Bombers centre Matthias Goossen, a product of Richmond, B.C., who played his high school ball at Vancouver College and then attended Simon Fraser before joining Chungh on the Bombers O-line in 2016 as another second-overall pick. “He’s played the same way since he was 15 until now. 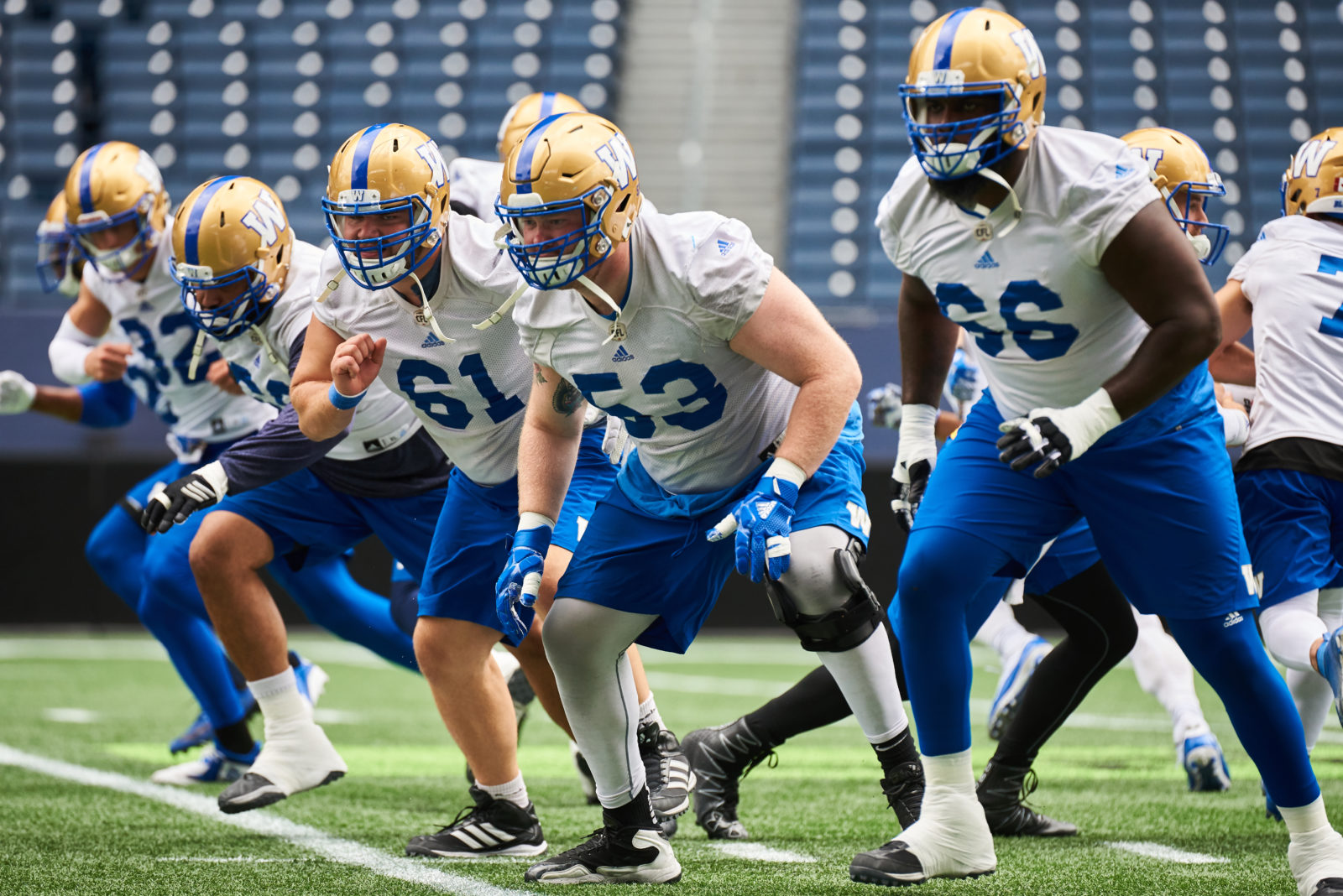 Chungh has also become a role model for the Sikh and Punjabi community, a role he has graciously accepted and has now seen him speak to schools in Vancouver, Winnipeg and… England.

“I was on vacation in London and Leicester City and the person I was staying with had two kids who attended a Hindu Christian school,” said Chungh. “She asked if I could speak to the kids. That was pretty cool.

“I don’t think there’s many Punjabis or Sikhs in the CFL or in professional sports in general. It’s good to have the support of that community. Football has become very diverse and it is still a way out for a lot of people to get a scholarship and get your school paid for.”

This isn’t Chungh’s first trip home to play in front of friends and family, but it still holds a deep meaning. It’s a chance for him to thank all those who helped get him here. And he’ll do his parents, friends, coaches and former teammates proud by doing what he always does by slugging it out in the trenches again. By getting his hands dirty again.

“It’s nice for me to play in front of my family and friends and the people I grew up with and supported me, including my high school coaches and teachers,” said Chungh. “They all come out, too.

“For my parents, football is still a bit foreign to them. Probably to this day they are trying to figure out some of the things that are going on out on the field. I grew up playing soccer and basketball, but when I found football my parents were always supportive. To this day, they’re still trying to figure out some of the rules, but they know a lot… especially my mom. She now watches every game on TV, CFL or NFL.

“This is fun for me, especially because a lot of my family doesn’t get to come to Winnipeg to watch games.” 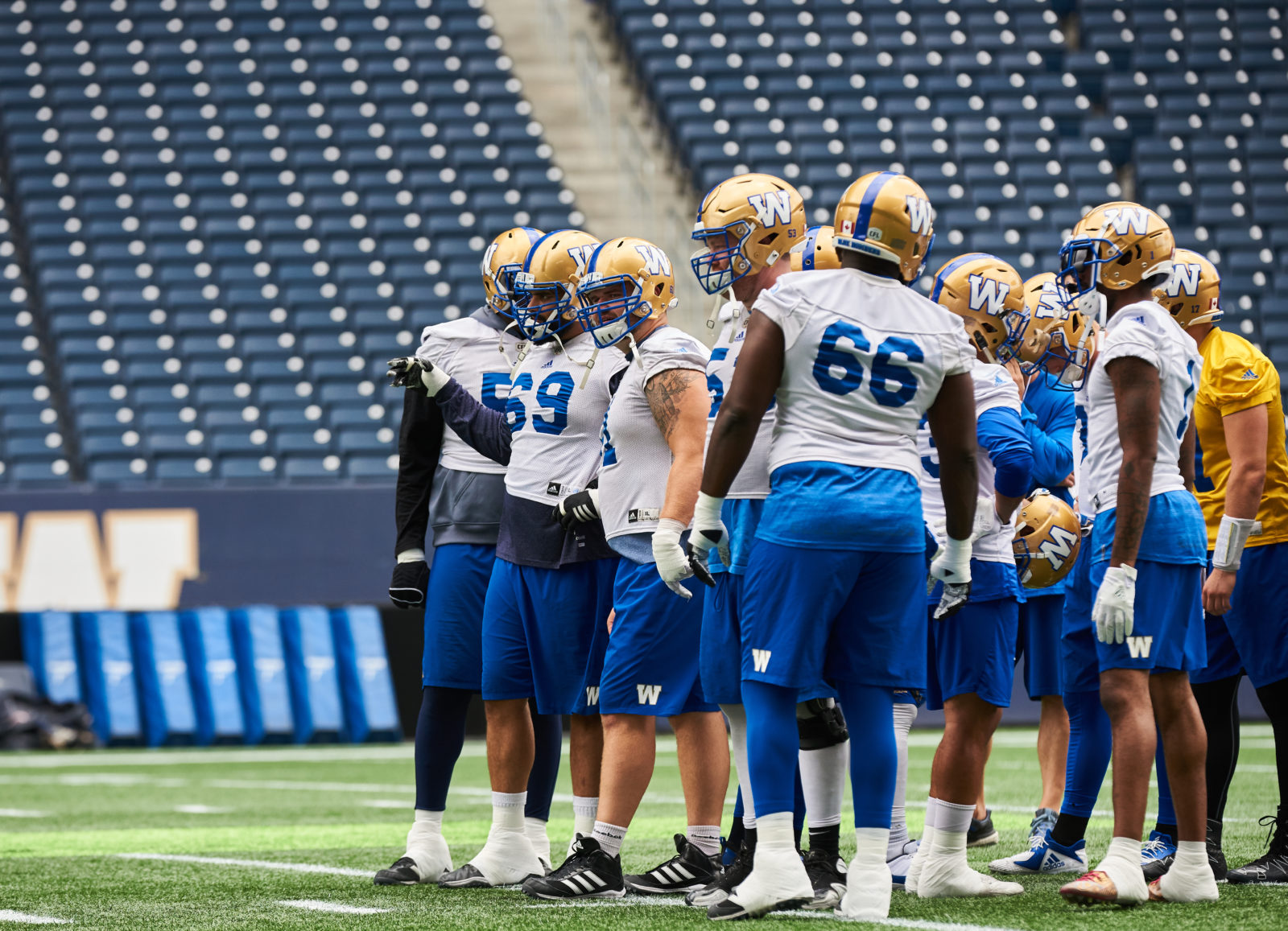 There are a number of Bombers with B.C. connections or ex-Lions suiting up Saturday night, but it will be the first game back at B.C. Place for linebacker Adam Bighill.

“Beautiful weather, beautiful place to be,” said Bighill. “It’s going to be fun playing my old teammates again and competing. I know they’re going to come out hungry and all week we’ve been preparing for what we’ve got to do and that’s go out and win and play our brand of football.”

Bighill said he has had his phone off this week, so he hasn’t been exchanging text messages.

“It’s business,” said Bighill, who will have 18 friends and family at the game, “and when the games are over we can chat.”

Andrew Harris, meanwhile, is also back again to the place where it all began for him.

“There are lots of positives and a lot of great memories and definitely that nostalgic feeling coming back to this building,” said Harris. “I love that turf at B.C. Place. It’s always nice to come back to visit, but ultimately we just want to get the win and get out of here.”

Bombers head coach Mike O’Shea said a decision on the availability of LB Chandler Fenner won’t be made until the last moment. If he can’t go, the Bombers could move Maurice Leggett back to that spot. Fenner’s potential absence, coupled with the loss of LB Shayne Gauthier – who leads the CFL in special teams tackles – does impact the kick-cover units.

But O’Shea is happy with the available depth to fill those spots.

“Absolutely,” he said. “You look at a guy like Ian Wild, who draws back on and is an excellent special teams player, too. Kyrie Wilson, Jesse Briggs… we’ve got a lot of guys who can step into those spots that seem to be generating tackles right now. We’ve got a lot of depth and guys love playing those roles.”