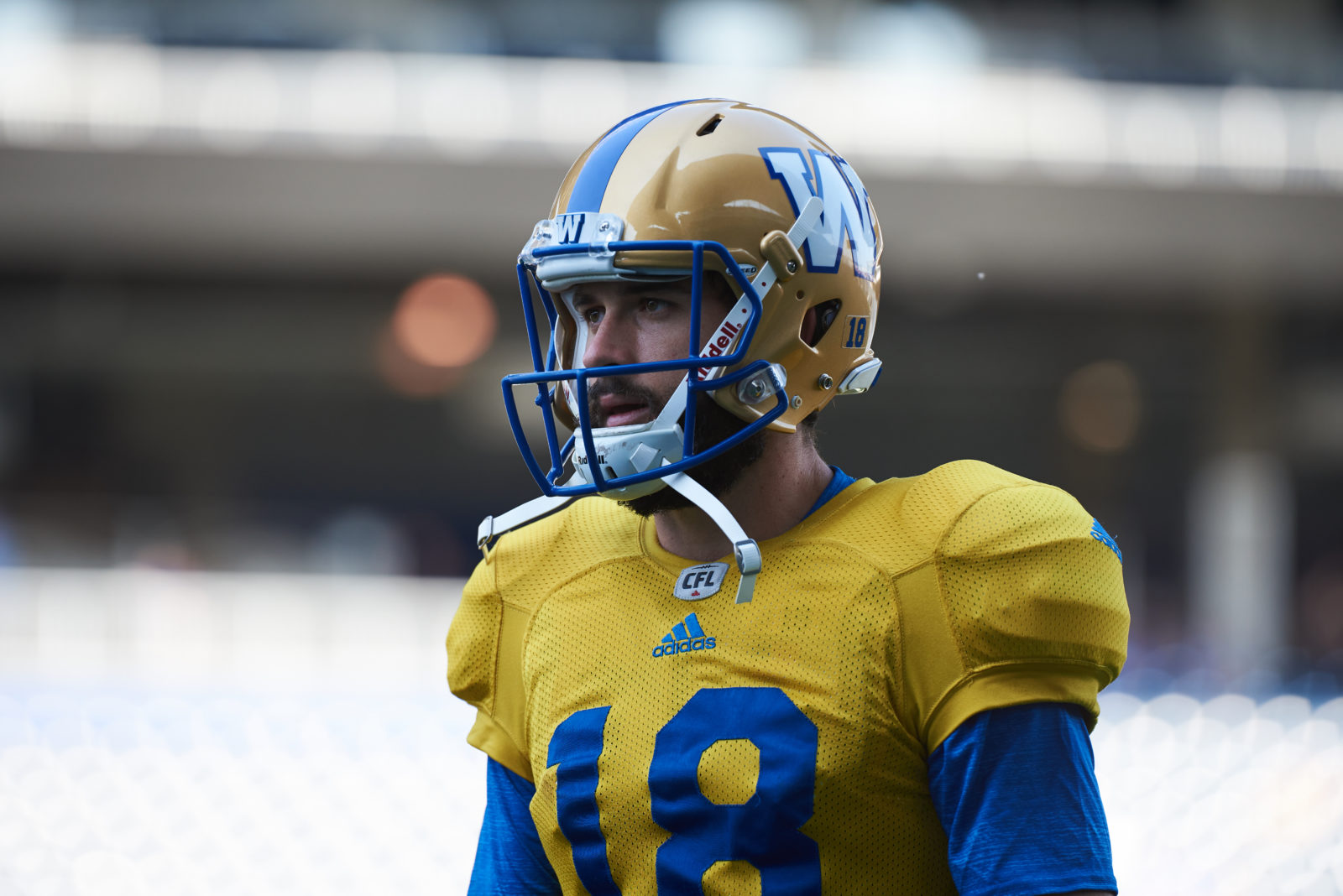 There are no do-overs or mulligans in football. Alex Ross knows that as well as anyone.

And while so many Winnipeg Blue Bombers fans are still gushing about the work of rookie Chris Streveler in last Friday’s 33-13 preseason victory over the Edmonton Eskimos, Ross also understands the microscope has been cranked up on his game for entirely different reasons. Ross finished Friday night just 1-of-8 for eight yards, while also rushing once for eight yards.

“Something to learn from,” said Ross Monday when asked to assess his game against the Esks. “I felt like my reads were pretty good, it just wasn’t clicking. It’s about watching the film, seeing it and learning from it. We just couldn’t get a drive going and it wasn’t clicking for me for whatever reason. Everything was a little off. Being a little bit more accurate for me is the main thing.

“I could see it a little faster, but overall my reads were decent. I might need to take my first read sometimes more often when it’s there instead of going through my whole progression. I just need to dial it in a little bit.” 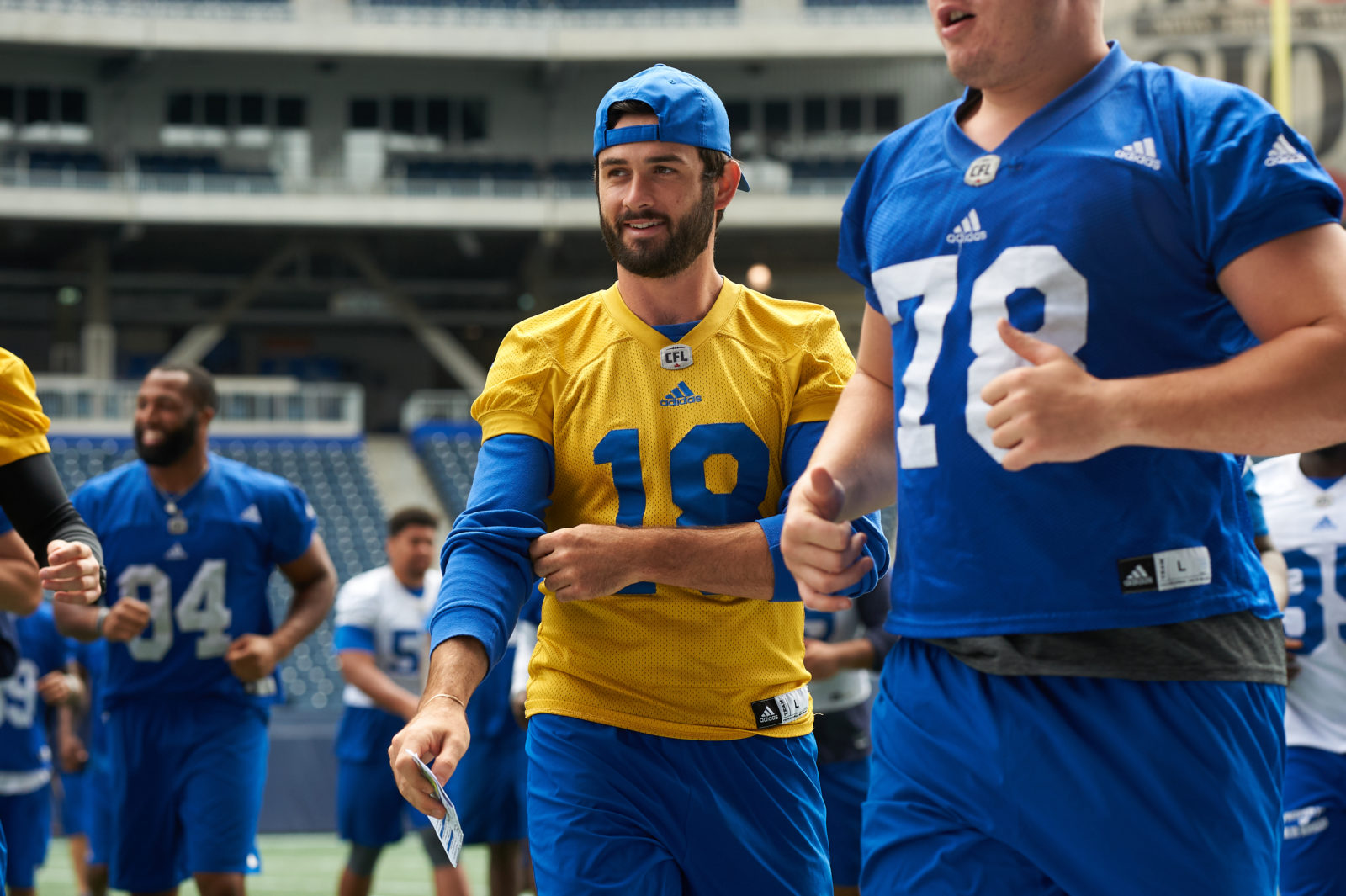 Indeed, where Streveler helped his cause with a 10-for-10 performance for 140 yards and an 80-yard TD strike to Myles White – while also rushing four times for 37 yards – Ross muddied the QB picture behind Matt Nichols with his night’s work.

A star during his days at Coastal Carolina, Ross spent last year with the B.C. Lions and his experience, although limited, was to help him well here in camp with the Bombers. But he’ll need to serve up more game-night evidence this Friday in Vancouver.

“The opportunity is there, so for me, it’s just about doing what I do and doing it well,” he said. “This next pre-season game for me is going to be about dialing everything in, being focused and doing it well.

Aside from his first snap on the first possession in which he ran for eight yards on a second-and-10 after Matt Nichols briefly exited the game, Ross was at the controls of the Bombers offence for five possessions, leading to one field goal at the end of a drive dominated by four Johnny Augustine runs totalling 36 yards.

“I know what I’m capable of, I know what I can do. I know what kind of arm I have. Now it’s just about showing it in a game setting. It’s about getting those completions early on, getting a drive rolling and getting into the swing of things. Once you get rolling then you start settling in.”

The Bombers have five QBs in camp now that Bryan Bennett is practicing; Nichols, Streveler, Ross, Bennett and rookie Zack Mahoney, who dressed but did not see the field last Friday. The rotation this week in Vancouver hasn’t been set, but Ross is almost certain to play.

“One bad game or a bad quarter doesn’t make your career. He knows,” said Bombers head coach Mike O’Shea. “He understands he didn’t play as well as he would have liked to and as a quarterback and a leader and a guy who has been doing it his entire career, you’ve got to believe he’s going to feel more comfortable and make sure that he makes plays when he gets out there the next time he gets that opportunity.

“That’s what quarterbacks are going to do.”

Asked if Ross will have to crank up the urgency given the work of Streveler or just ignore what his main competitor is doing, O’Shea was succinct in his answer.

All true, of course. But Ross also knows how this works: CFL camps are short, and he’s at a show-me stage of his career.

The Bombers released veteran DB Steven Clarke on Monday, just a couple of days after he picked off a pass and had a pass knock-down in the pre-season win over Edmonton. Clarke appeared in 25 games over four seasons with the B.C. Lions, but his release speaks volumes of the remaining competition at defensive back in camp.

“We wanted to give the other guys a bigger opportunity and when you have a veteran player in front of them and you’ve got the urge to play him for a half in the next game, you’re really limiting the number of reps that you get to see these younger guys.

“There are some young guys in training camp that have made some pretty impressive plays that are getting healthy now that we really want to take a harder look at.”

One of those young guys is Seisay, the 6-2, 203-pound product of Nebraska who has had stints with the Detroit Lions (2014) and Seattle Seahawks (2015-16) and just returned to practice this week after missing time with an injury.

“He’s long. We like his athleticism,” said O’Shea. “I’m glad he gets back on the field and gets a couple practices under his belt before this next game so that we can see what he can do.”

WR Corey Washington was working in Bowman’s spot with the starting offence. Washington was only targeted once in Friday’s win and did not catch a pass. But the Bombers clearly still like what they see.

“He’s been catching a lot of footballs in practice and getting open and even when he’s not open he’s making some tough, contested catches,” said O’Shea. “His speed looks good, he’s got a big frame. That’s when you apply some of the stuff he does in practice on a regular basis. You look at, did he have opportunities and we just didn’t find him?”