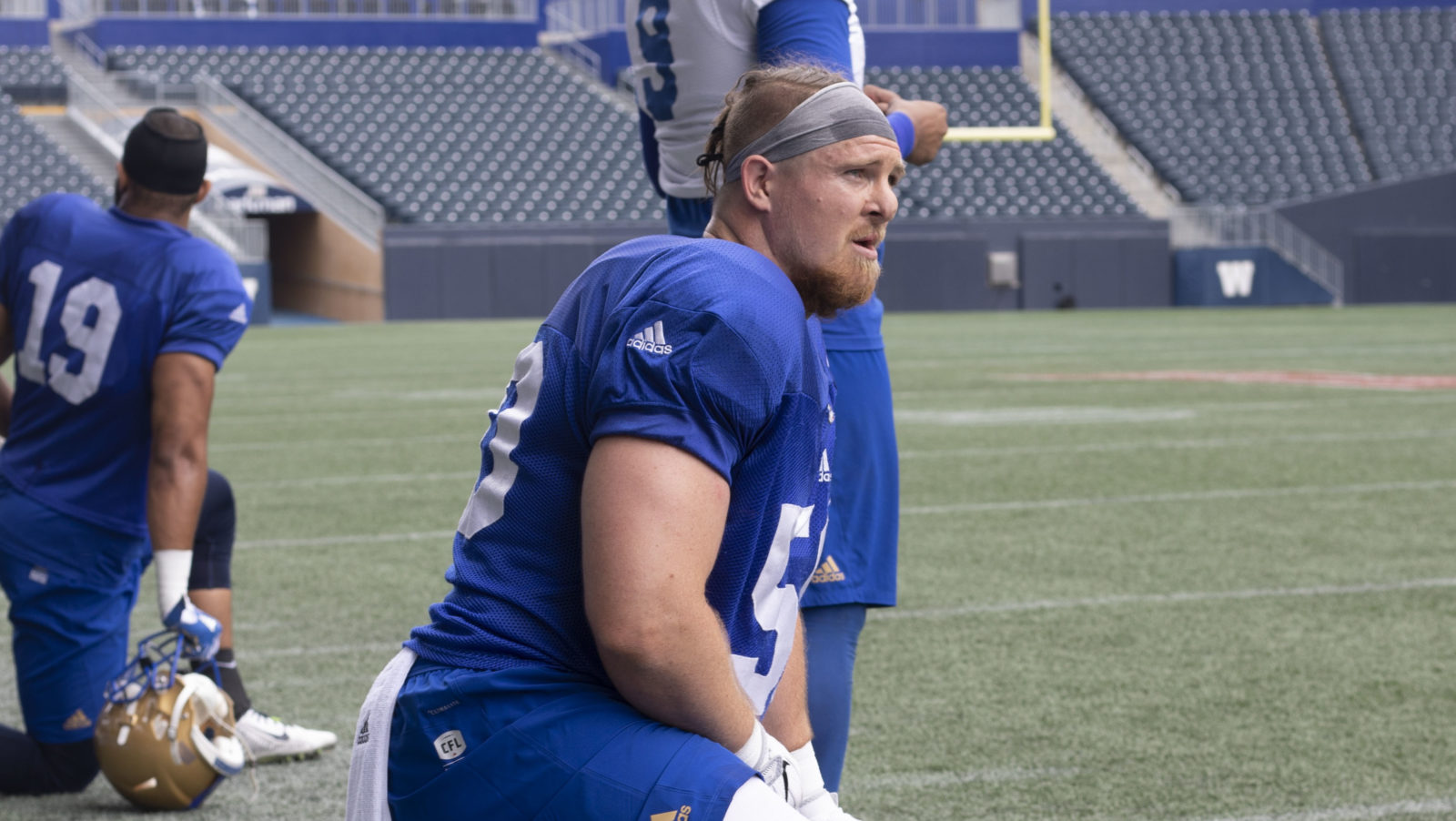 It began as a typical first day at a new job and in a new place. And, quite clearly, the plan was to ease Adam Bighill in to his new surroundings here with the Winnipeg Blue Bombers.

The defensive play calls are different, after all, and the four-time Canadian Football League all-star needs some time to make the adjustment and put names to faces.

Yet it took all of two snaps for Bighill – the club’s massive defensive addition after his signing last Saturday – to make a positive first impression on his first day of punching the clock in Bomber blue.

Bighill first watched the starting defence work for a stretch Thursday morning and then, after lining up in the middle, blitzed on his first snap and was in the offensive backfield in a flash. A couple snaps later he had perfectly read a sweep featuring receiver Ryan Lankford, quickly moving laterally towards the sideline before slipping through a seam to wrap his arms around the ball carrier. Let’s just say if he had been allowed to finish the play with a tackle, Lankford might still be in the trainer’s room.

In other words, the 29-year-old linebacker came exactly as advertised. And as for plans to ease him into things… well, this dog wants to eat and he wants to eat now.

And that drive – something we’ll all soon have reconfirmed after watching him for six years as a member of the B.C. Lions – comes from the competitive fire that rages in his belly. 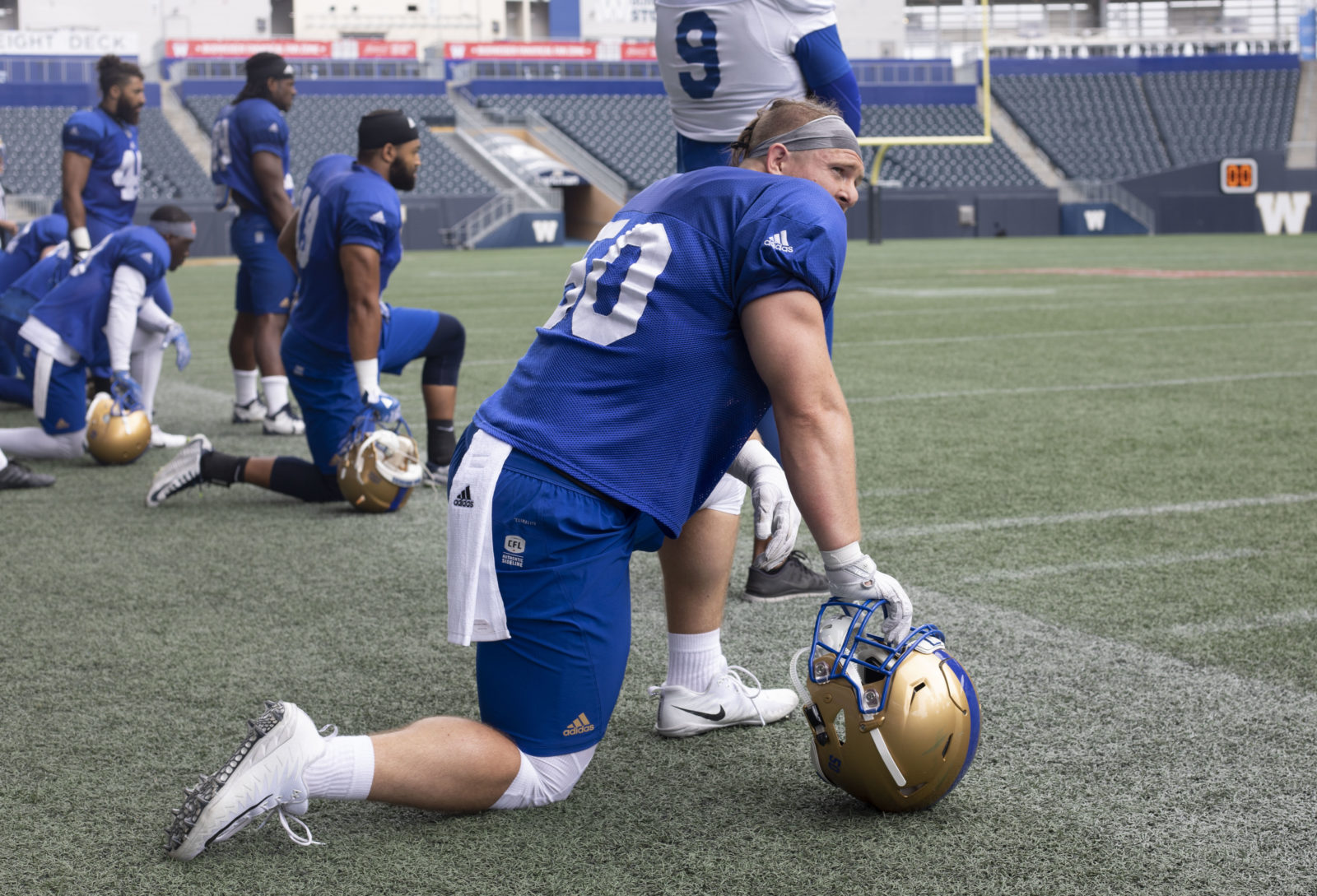 “It comes from having a chip on my shoulder when I was a young kid,” said Bighill after practice Thursday when asked to trace the root of his work ethic and professionalism.

“I grew up with a cleft lip and palate. I felt different than other people, but I didn’t want to be different. So what I did was develop a natural, competitive nature that I wanted to be the best at everything I did. I wanted to prove to everybody that I’m no different than anybody else and you’ve got to respect me because I’m going to beat you at whatever we’re doing.”

“That’s what molded me as a young kid. And my family, obviously, did that as well. My dad and my mom taught me about work ethic and about teamwork and always being there and being dependable. That stuff just snowballs to a point where I said I wanted to be a professional football player when I was seven and I meant it. As I got older, going through high school was an opportunity every day to try and get better and to reach my goals and dreams.”

All of this is what endeared Bighill to his Lions teammates and the fan base on the coast. He’s listed at 5-10 and 230 – considered smallish for a linebacker by NFL standards – but his motor is revving from the moment he steps on the field. It’s something Bombers head coach Mike O’Shea noticed when Bighill was a rookie – a story the linebacker told here – and will appreciate even more now that they are sharing the same sideline. That respect between the two men is mutual and is certain to grow.

An example: O’Shea was at the back of the media room when Bighill held his post-practice press conference. Following that session, the Bombers coach was asked about what he sees in Bighill as a player and a man.

“It’s pretty simple. You’ve got it on tape right now,” O’Shea began. “There was a point in the interview where he talked about the competitive spirit he has and his statement was ‘I’m going to beat you.’

“That’s all you need to write. That’s who he is. That’s his preparation and all that other stuff… when he steps on the field, he knows he’s going to beat you. And when he says that, you just believe him and it gives you some sort of different feeling inside.

Where Bighill lines up, whether it is in the middle or at the weak-side linebacker spot, is almost of no matter. It’s the simple fact that he is inserted into the Bombers front seven that will make the defence tougher and more versatile.

And those who have shared a locker room with him in the past – count Chandler Fenner, Anthony Gaitor, Steven Clarke, Craig Roh and Andrew Harris among them – will tell you his trademark work ethic is infectious.

“He’s definitely going to be a good fit for us from a leadership role, which is huge, and from a playmaker’s role as well,” said Harris. “His first year (in B.C.) he came in and he was just a scrappy guy. I said it before, but he’s one of those guys who would step on your feet or poke you in the eye or give you a charley-horse.

“He was just hungry and he still practises that way and plays that way. Honestly, it’s just a treat to have him on our team and a blessing that I don’t have to go against him against B.C. this year.”

Bighill’s first impression, obviously, was a big thumps-up from everyone involved with the Bombers on Thursday. And conversely, his first impression of his new surroundings was all good, too.

“First impression is guys are here for the right reason,” he said. “There’s a unity and a brotherhood in the locker room and I can definitely see that. From the moment I came in everybody welcomed me and I see everybody hanging out and talking together.

“I see a coaching staff that is prepared and has spent a lot of time on the Xs and Os and getting everything ready for the start of the season and is making sure the players have everything they need.” 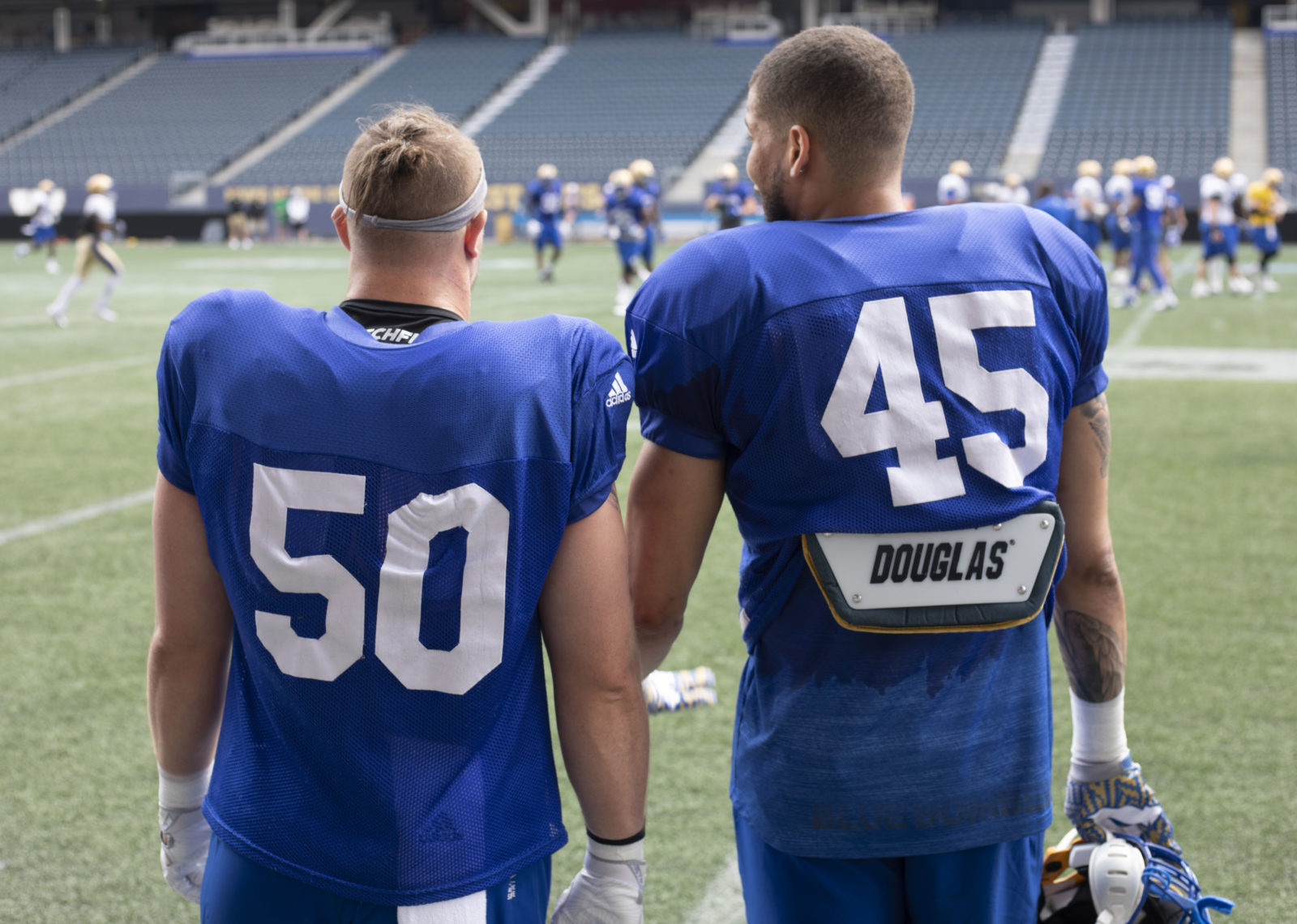 Adam Bighill made the No. 44 famous in B.C., but that number is owned by Bombers linebacker Shayne Gauthier. Bighill wore No. 50 on his first day at Bombers practice – incidentally, that’s Mike O’Shea’s old number – and sported a No. 99 last year in New Orleans.

“I talked to Shayne and he’s very… not protective of his number, but he wants it,” said Bighill. “He’s earned his right on this team and has created his professional career in that number. So I told him I understand he doesn’t want to give it up. I’m going to work on finding a new number and create a new brand for myself. Obviously 44 has a lot of meaning for me from my college days, but that’s the way it is when you come to a new team. You’ve got to find your fit.”

ONE MORE FROM BIGHILL:

It’s way too early, but here’s his take on what he sees after one practice session with the Bombers defence and based on what he saw during his days with the Lions.

“If you look at history over the past couple of years this defence has created the most turnovers,” said Bighill. “From that standpoint, I don’t want to go back on that. I want to be a defence that prides itself on takeaways and we continue doing that. In general, it’s an athletic, physical defence. You’ve got DBs who like to come up and challenge people and the front six-seven are playing pretty physical up front. If you control the line of scrimmage, it’s what you want. At the end of the day if you are a physical football team that plays fast, physical and smart you’re going to win a lot of games.”

The Bombers released Canadian DT Ian Marouf on Thursday. Marouf, a sixth-round draft pick last season, was carted off the field on Tuesday.

SCOUTS IN THE HOUSE:

The Detroit Lions had a regional scout at camp on Thursday and members of the University of North Dakota Fighting Hawks were also in attendance.