Goossen leaving a lasting impression in the community 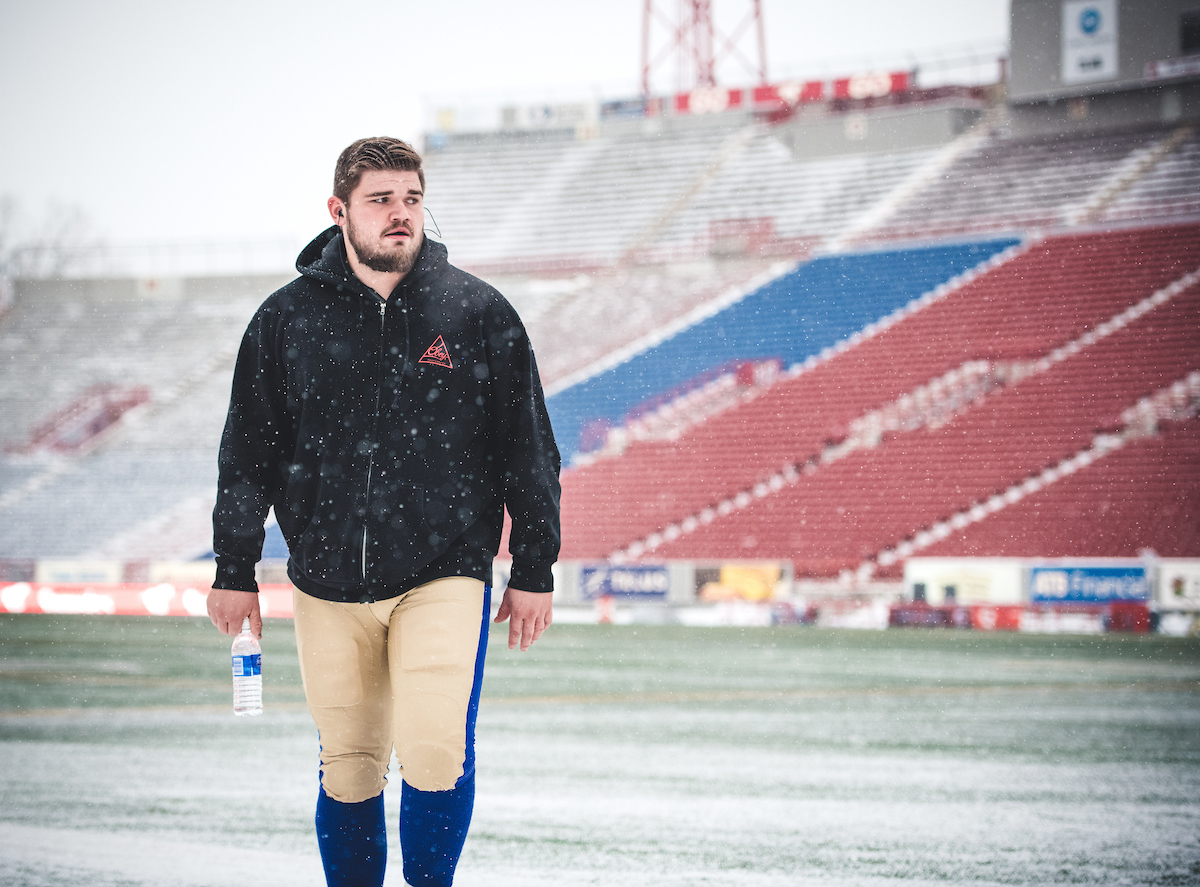 Goossen leaving a lasting impression in the community

Matthias Goossen (61) of the Winnipeg Blue Bombers before the game against the Calgary Stampeders at McMahon Stadium in Calgary, AB, Friday Nov. 3, 2017. (Photo: Johany Jutras)

He was relaying a powerful message and doing so both passionately and eloquently.

That’s the first thing that struck Rob Desnomie while listening to Winnipeg Blue Bombers centre Matthias Goossen speak this winter at a ‘Be More Than a Bystander’ conference in Harrison Lake, B.C.

Desnomie is a yard driver for Evraz Steel in Regina and a member of the United Steelworkers union. Oh, and he’s also a Canadian Football League fan living and working in the heart of Saskatchewan Roughriders country.

But Desnomie was so moved while taking in Goossen’s speech he not only reached out to the to the team via e-mail to praise the work of the veteran centre, but he and his wife are also vowing to buy Goossen No. 61 jerseys and wear them when the Bombers visit this season.

And yes, he knows what kind of attention that might draw.

“It’s all good, man. I’m not worried about it,” said Desnomie with a chuckle in a phone interview with bluebombers.com. “I mean, I understand the rivalry. It’s supposed to be good, healthy competition and we should be able to walk away with, ‘Congrats, you won, we lost.’ Or vice versa.

“I will admit I’ve never walked into Riderville wearing opposition colours, so I imagine I will hear it. But if a guy like him can stand up and speak about issues like this, then putting on a Bombers jersey and going to a Riders game is the least I can do.”

The ‘Be More Than a Bystander’ campaign was created by the B.C. Lions as part of a program through the Ending Violence Association of B.C. The Bombers Break the Silence on Violence Against Women campaign, meanwhile, was launched in 2015 and Goossen is one of the players who has spoken on the subject at high schools and other workshops.

The impact of the program has been tangible: statistics from post-presentation surveys have shown that 83 percent of students have reported an increase in awareness of the issue of violence against women in Manitoba, and 97 percent of respondents said they would be more than a bystander if they saw a woman or a girl being harassed in their community.

That’s part of the message Goossen delivered that impacted Desnomie.

“It wasn’t one specific statement that blew me away, it was just observing him during the conference,” said Desnomie. “I spoke to him afterward about the program, about football – I had never spoken to a professional athlete before – and got to know him a little bit. I was just impressed with how he carried himself, how he shared his insights. Here was a 25-year-old guy trying to change the perception of football players, and maybe in some regard, of professional athletes and how they conduct themselves. He was using his celebrity or notoriety for something positive, but it’s also what he’s apparently saying in the locker room to his teammates.”

“It’s not about standing up and slamming his fist. It’s about pulling a guy aside and saying, ‘You made a joke in there and I don’t know if that was the right thing to say…’ To have the presence of mind to say something like that or be a leader is commendable. I respect him for that.” 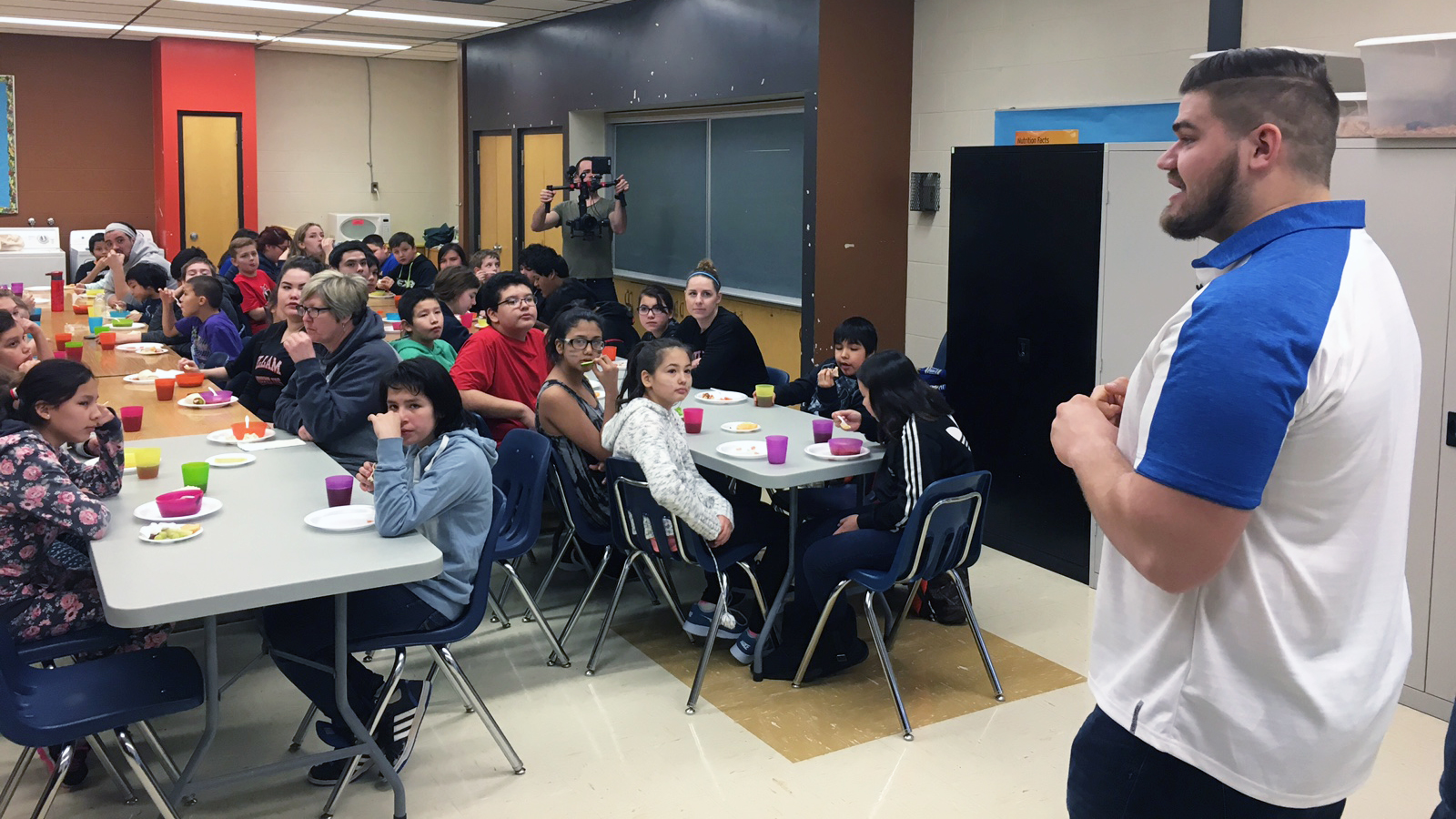 Just to be clear, it was Desnomie who reached out to the football club about Goossen, a four-year veteran who makes a number of appearances on a variety of causes during the year. A winner of the Ed Kotowich Good Guy Award in 2016 – which ‘celebrates a player who shows excellence in football ability, team camaraderie, and effort in the community’ – Goossen does all of this without seeking any fanfare or attention.

“The biggest thing I got from Matthias is here’s somebody who’s not just talking about it, he’s doing something about it,” said Desnomie. “Actions speak way louder than words and Matthias is speaking very, very loudly with the actions he’s taking. I can’t applaud him enough.

“I know he does this not seeking a pat on the back, but to just go out and be heard and get the job done. That’s a good Canadian guy with a good Canadian work ethic. Those are the kind of guys we should be showcasing once in awhile. There’s so much hate and awful stuff going on out there and I just think it’s important for people to know there are natural-born leaders like Matthias out there. He deserves some recognition.”